Science hot start not enough for Skilins’ strive for excellence 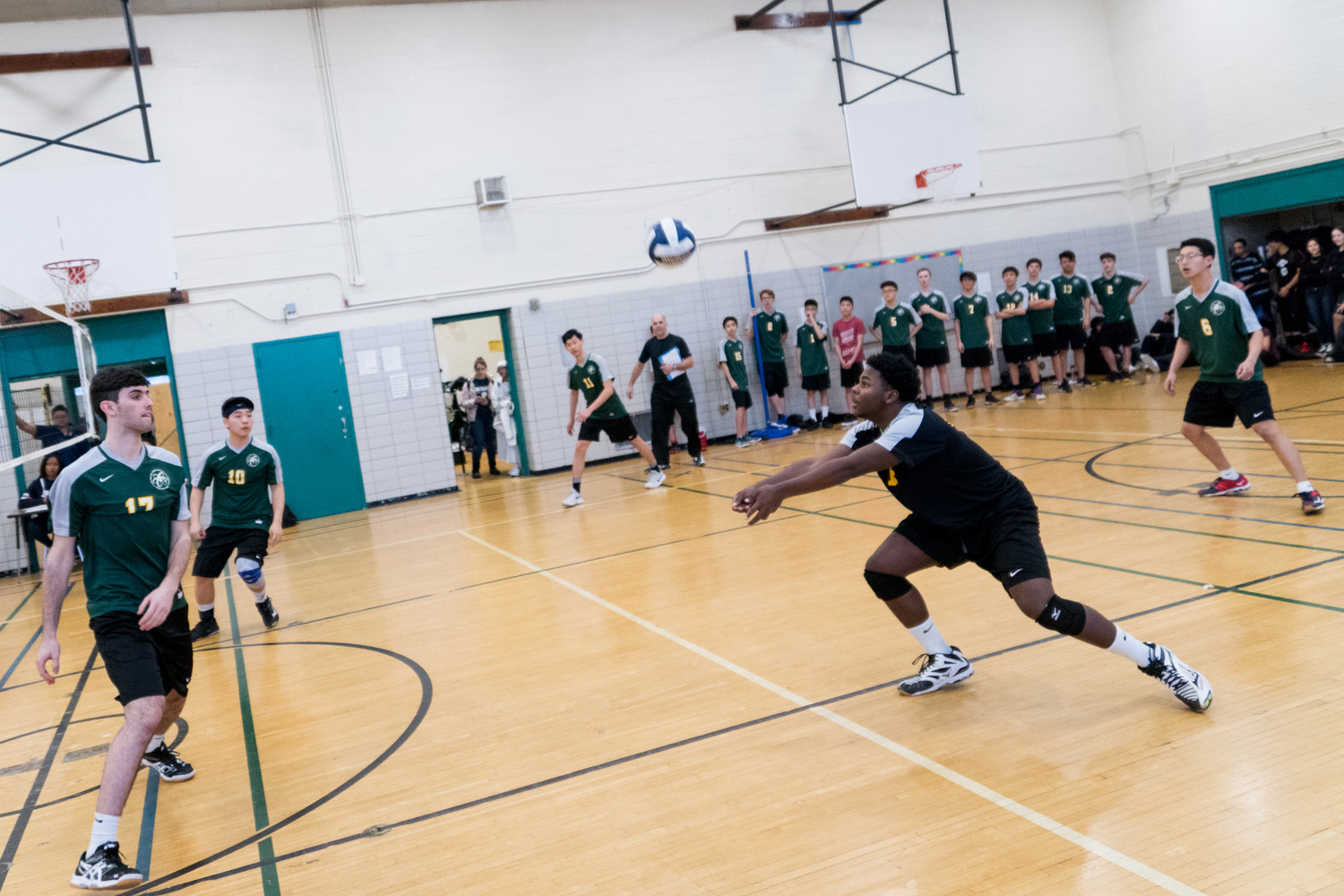 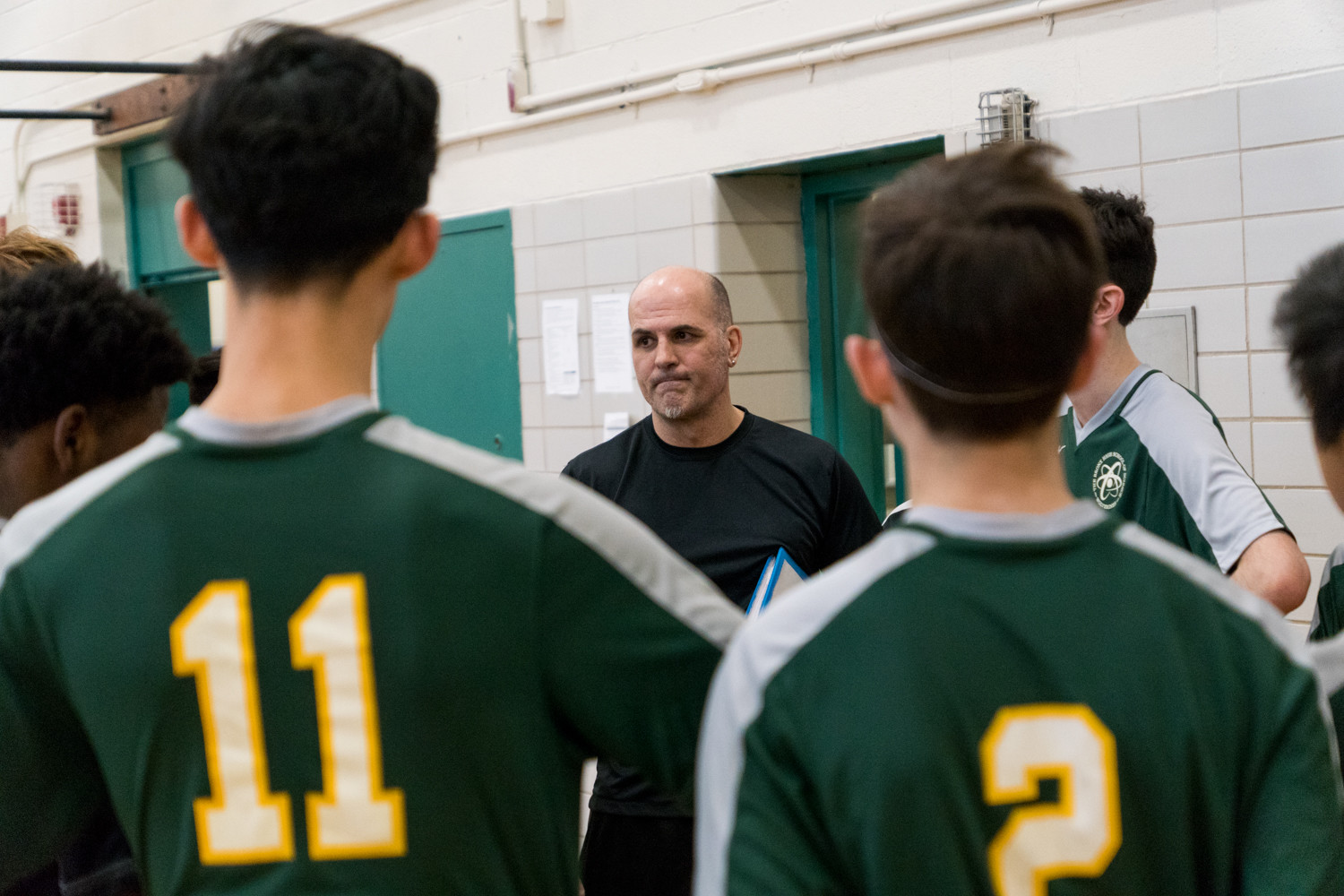 Bronx Science head coach Dan Skilins takes a timeout to discuss things with his Wolverines in their 2-0 victory over Truman last week.
JULIUS CONSTANTINE MOTAL
Previous Next
By SEAN BRENNAN

Bronx Science had just moments earlier closed out an impressive 25-14, 25-12 sweep of Truman High School to run their season record to 2-0. And while Science players high-fived their latest success, head coach Dan Skilins was none too happy.

When approached after the Wolverines’ latest win, Skilins smiled. “I talk to you now before I go in and speak to them. They’re going to be here awhile.”

Despite the straight set victory, Skilins was upset with his team’s performance against the Mustangs. Skilins expects excellence from his team, and in his eyes, there was little of that on display.

“We’re not playing on all cylinders,” Skilins said. “Our energy and effort are not there all the time. That should be our focus. Sometimes we show a little too much bravado because we know how good we are, so we’re only going to put forth minimal effort to get past the job at hand. But that is not going to get a city championship with that mentality.”

Skilins knows a little something about winning, having now posted a phenomenal 130-5 record versus borough teams during his six-year tenure at Bronx Science. And while he thinks this team ultimately will be a contender for the Bronx A Division crown once again — the Wolverines have won it three straight seasons to date — he has his eye on the bigger prize of a city title.

But only if his team refocuses on the task at hand, night in and night out.

“I like my players,” Skilins said. “They’re really good. I just think that stretch of playing well, we need to accentuate and extend that for a longer period of time. Right now we’re showing glimpses and short stretches, but we really need to start showing that from the start of the match to the end of the match.”

Ethan Rhabb doesn’t paint as harsh a picture for the Wolverines this early in the season. While Science could clean some things up and become more efficient, he thinks a program that has now gone 29-3 in its regular-season games the past three-plus seasons will figure things out sooner rather than later.

“I think we have the makings to be pretty good,” Rhabb said. “We have a lot of young players, but a lot of our players play club volleyball in the offseason, so we all come to the court in the beginning of March ready to play. Sometimes we play down (to their competition) and we have off days. But we’re starting to gel a lot more.”

Science was barely tested by Truman as the Wolverines jumped out to a 12-4 lead in the first set, cruising to the easy win. It was more of the same in the second set when Science broke from the gate with a 10-4 lead, extended it to 16-7, and finished with a flurry to cement the victory.

Rhabb finished with six service points, Ethan Chen logged 15 assists, and Derek Peng added three aces and five assists for the Wolverines, who have not dropped a single set so far this season.

To better prepare for the citywide playoffs in May, Skilins has looked to beef up his team’s schedule by lining up matches with high-caliber programs from outside the borough. Rhabb thinks that will benefit the Wolverines in the long run.

“Most of the competitive teams are in Queens, so we have to schedule scrimmages and tournaments aside from our league games in order to make sure that we don’t lower our level,” Rhabb said. “Playing a lot of teams outside the Bronx will be good for us because I really do think we have a chance to win the championship this season. Anything can happen, of course. But if we continue to play well, we’ll be fine.”

Although at this point in time, Rhabb’s idea of playing well and that of Skilins may be at opposite ends of the spectrum.

“We’re quite a ways away right now,” Skilins said. “We’re very far away. We got a lot of work to do. But I’ll be happy to get them back in the gym and get the work done.”