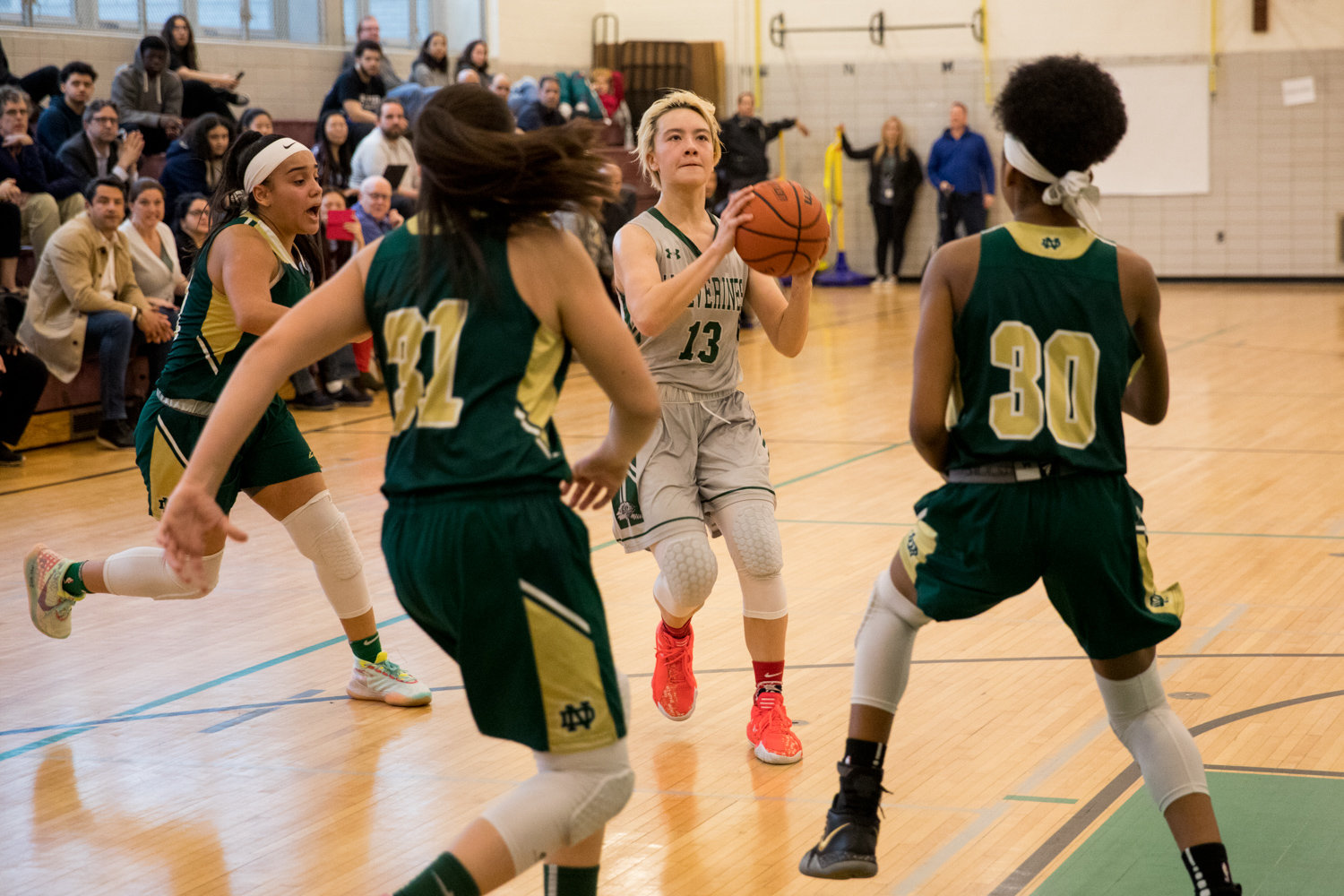 Sarang West did all she could to lead Bronx Science past New Dorp, scoring a team-high 20 points. But the Wolverines ultimately came out on the short end of a 59-46 decision in a PSAL playoff game last week.
JULIUS CONSTANTINE MOTAL 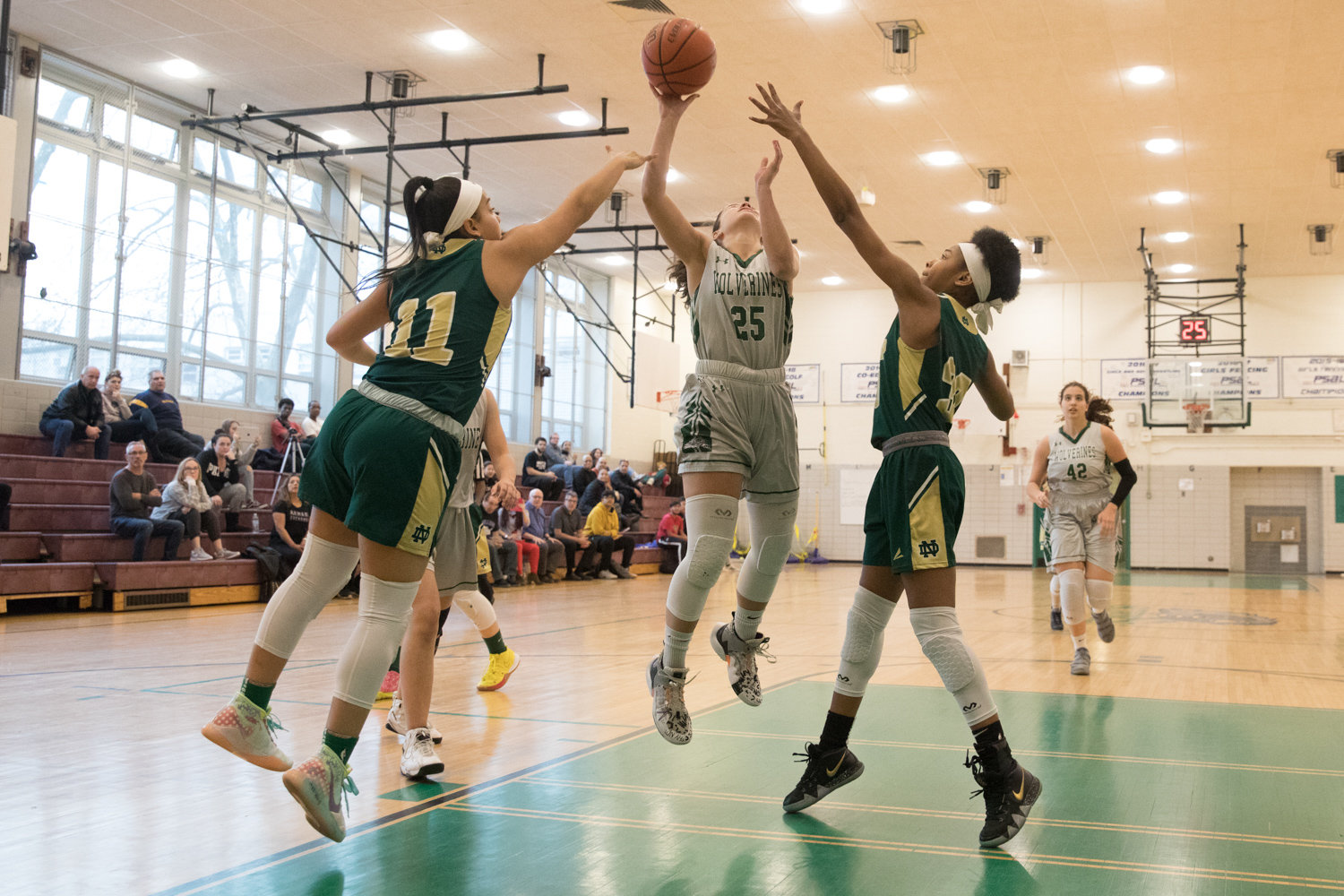 Bronx Science junior guard Carolina Lopez was mired in foul trouble against New Dorp last week, and was held to 12 points in the Wolverines’ playoff loss to the Cougars.
JULIUS CONSTANTINE MOTAL
Previous Next
By SEAN BRENNAN

After averaging a little more than 23 points a game during the regular season, Gomes upped her play a level or two in the postseason. She poured in 49 points in a first-round playoff win over Banneker before dropping 25 on Lincoln in a second-round upset.

Michael Mei was so impressed with what he saw of Gomes on tape that the Bronx Science coach called her “a monster” before she ever stepped into Science’s gym.

And when the final horn sounded on New Dorp’s 59-46 playoff win over the Wolverines last week, Mei simply described her as “every bit as good as the stats say she is.”

Gomes finished with 24 points in the win, with nine of those coming during a pivotal 20-4 Cougars’ run that began late in the third quarter and continued into the final period. It was one which was aided by a plethora of Science miscues that ultimately led to the Wolverines’ defeat.

“Those were some costly turnovers that we made in that stretch, and against good teams like New Dorp, all you have to do is have a lapse in one or two possessions and the game can swing,” Mei said. “We should have gone into the fourth quarter with a six-point cushion. I’m not saying we’d win the game, but there definitely would have been a different tone in the fourth quarter.”

Science was holding a 39-33 lead with just over a minute remaining in the third, and the Wolverines had the look of a team ready to make its first trip to the PSAL semifinals. But then the bottom fell out, thanks largely to Gomes.

She began New Dorp’s game-changing run with a three-pointer to pull the Cougars within three. By the time she was completing the run with a pair of free throws, Bronx Science found itself in a 53-43 hole with under two minutes to play. The Wolverines never recovered.

“I didn’t feel as comfortable as I would if we would have had a bigger lead, but I still thought we could have pulled it out,” said Science’s Sarang West, who finished with a team-high 20 points. “I knew it was going to be a close game, but the end wasn’t exactly what we wanted.”

Mei came away even more impressed with Gomes after seeing her perform in person for the first time.

“She’s tough,” Mei said. “She’s not a showboating kind of guard. She’s just very effective at what she does.”

And while the loss ended the Wolverines’ season, coronavirus eventually ended New Dorp’s playoff run when the PSAL canceled the rest of the postseason before the Cougars could play their semifinal game against Brooklyn Law and Technology.

So with no champion to be crowned this year, Bronx Science looked ahead to the next one when all but one player will return to a team that went 19-3, won the Bronx A South Division crown, and reached the quarterfinals for the second time in three seasons.

The future appears promising for these Wolverines.

“I think we’re in a great position even though we lost,” West said. “I think we definitely have a very bright future ahead of us. We’re only losing one player (senior guard Kaitlyn Romanger), so that’s a big plus for us to have pretty much the entire team coming back.”

Carolina Lopez, who finished with 12 points in the loss, will return for her senior season to team with West and give the Wolverines one of the top backcourts in the city next season. And she expects it to be a special campaign for Science.

“I think we were really good this year,” Lopez said. “We were better than the last two years I’ve been here, and we’ll basically have the same team back. So I think we’ll make it to at least the Final Four next year.”

The 2019-20 season turned out to be more successful than Mei expected, especially with a roster dotted with so many young players.

“We’re carrying four freshmen,” Mei said. “And if they train and develop over the summer, one good off-season of hard work, I think we’re looking at a totally different team next year. I think we could get at least as far as we got this year and, perhaps, even take the next step.

“Listen, I know the result was not what we wanted today, but I think we were right there. We could have definitely come out on top here.”