Scooting along to the rest of the Bronx — and beyond

Pilot program could offer other ways of getting around, beginning March 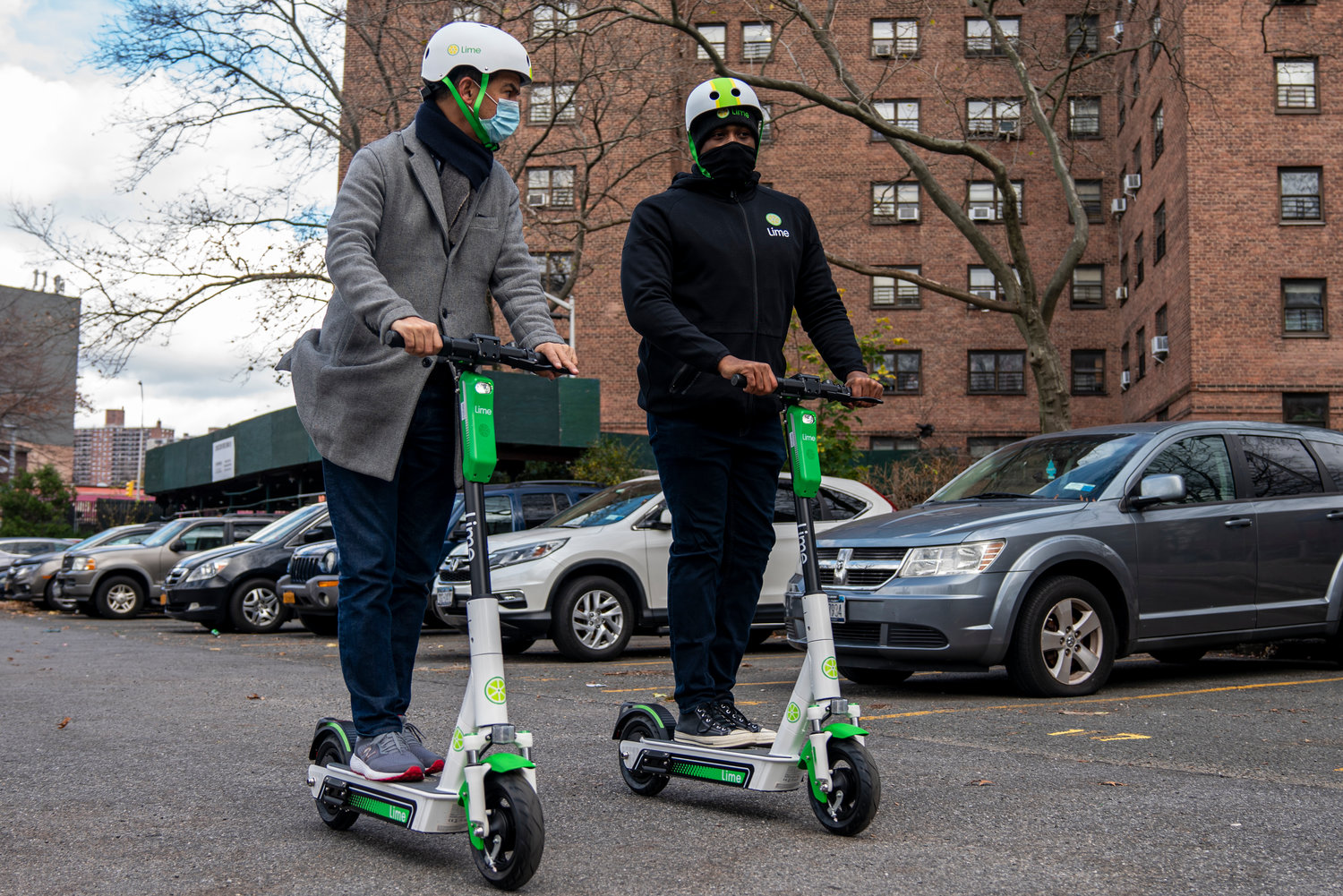 Electric scooters could soon make their way to the northwest Bronx as part of a pilot program. Councilman Ydanis Rodriguez — who’s also the city council’s transportation committee chair — hosted an e-scooter demonstration recently at the Marble Hill Houses Community Center to introduce the potential new way of getting around.
HIRAM ALEJANDRO DURÃN 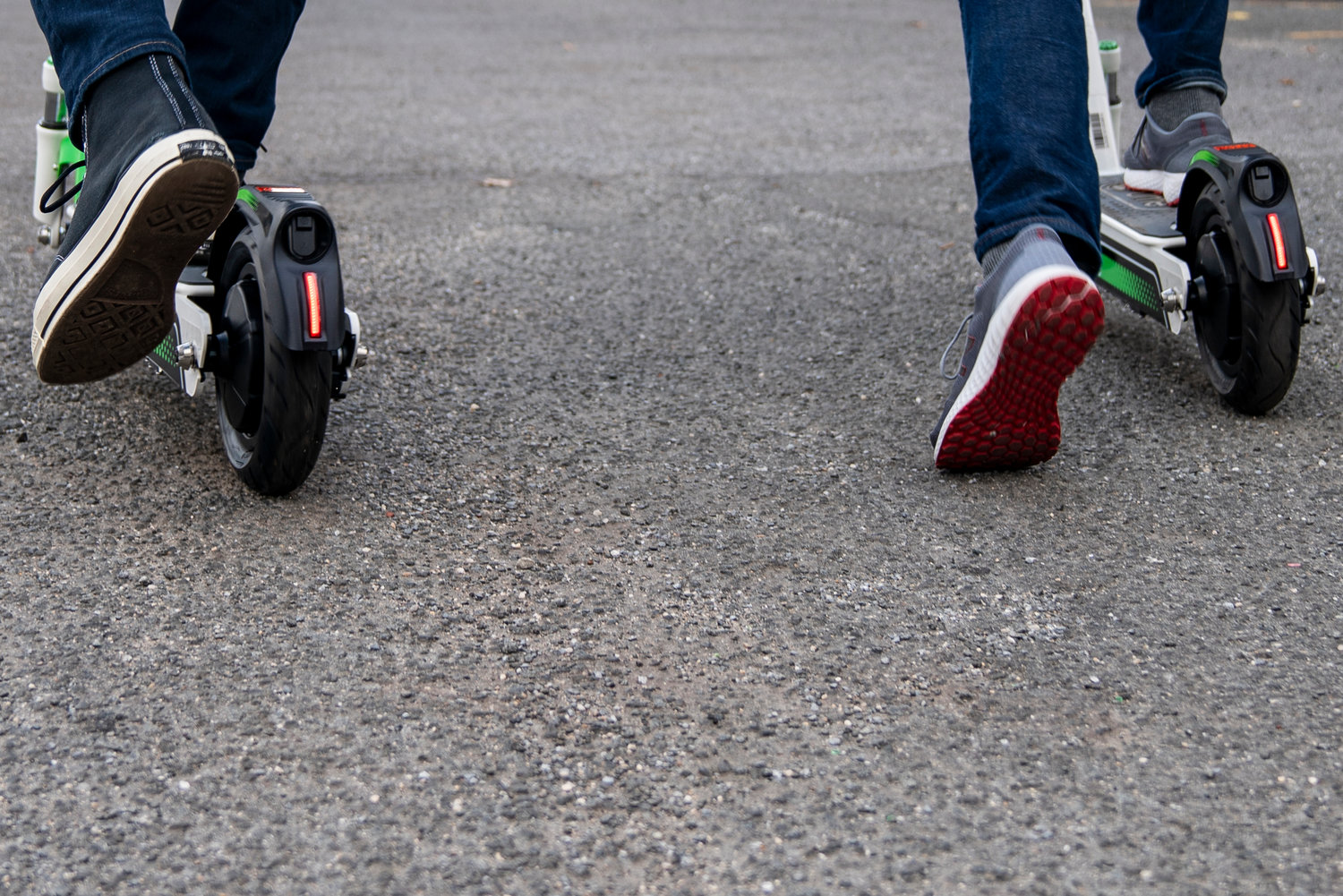 This part of the Bronx could become home to an e-scooter pilot program as early as next month. The scooters could provide inexpensive, reliable travel to other mass transit offerings throughout the borough, advocates say, without needing to rely on cars.
HIRAM ALEJANDRO DURÃN 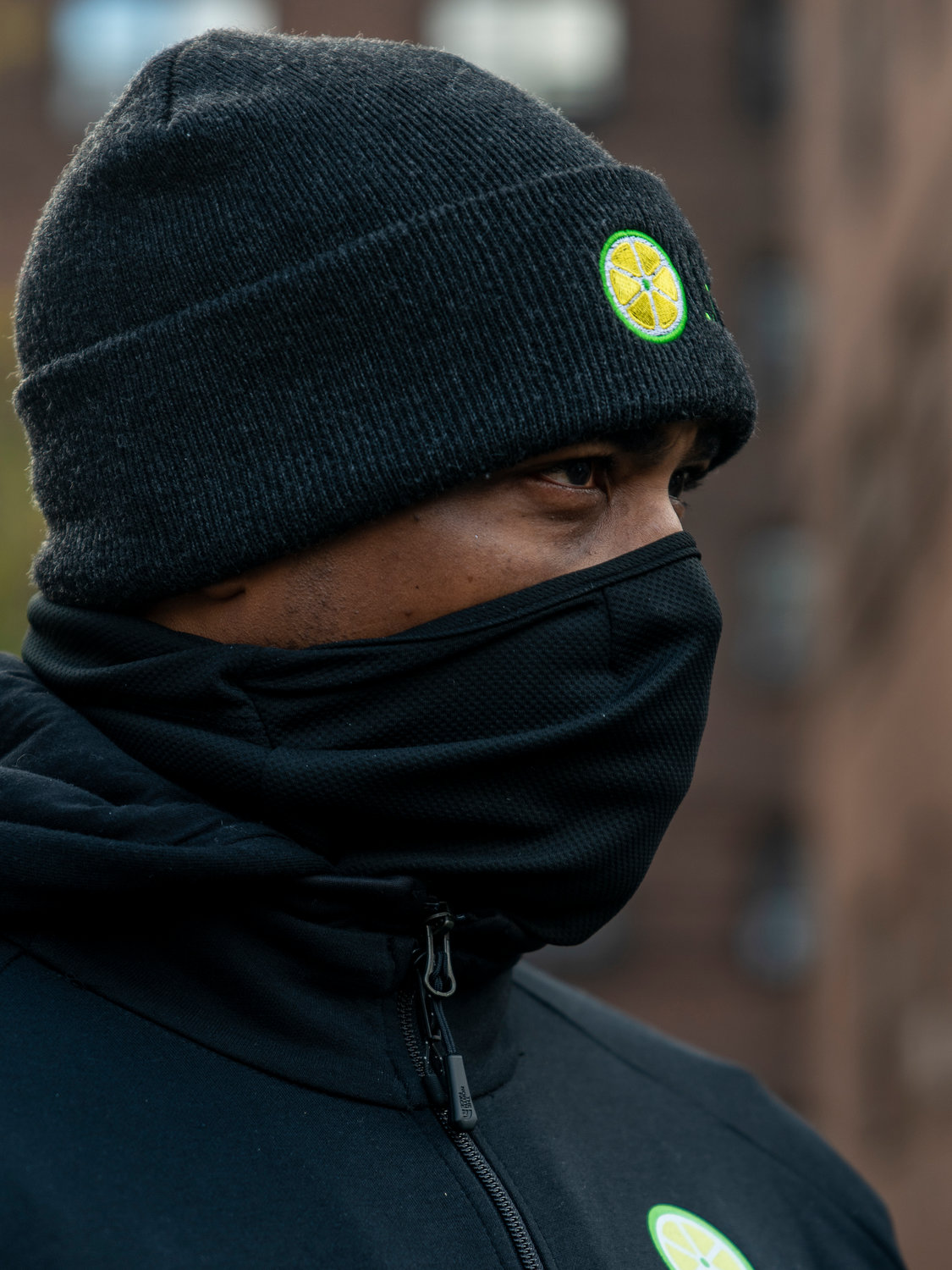 Other ‘micromobility’ transit options like Citi Bikes are scattered throughout the city, but haven’t quite made their way to this part of the Bronx. Yet, thanks to city council transportation committee chair Ydanis Rodriguez, other options like electric scooters could come to the area soon thanks to a proposed pilot program.
HIRAM ALEJANDRO DURÃN 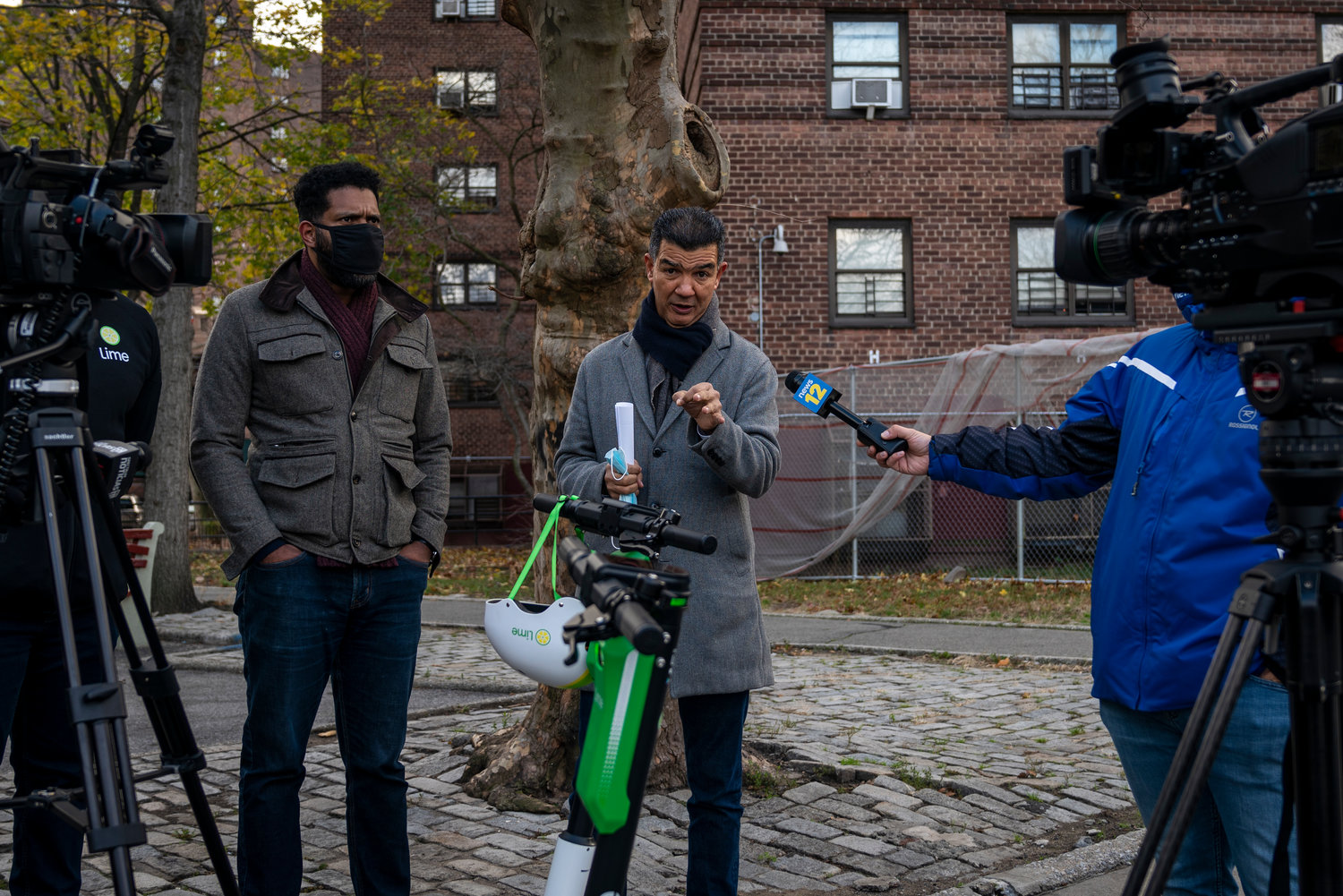 Residents of the Marble Hill Houses and other NYCHA properties might benefit from the city’s proposed e-scooter pilot program. According to e-scooter company Lime, other cities provide reduced-price options for riders on public assistance.
HIRAM ALEJANDRO DURÃN 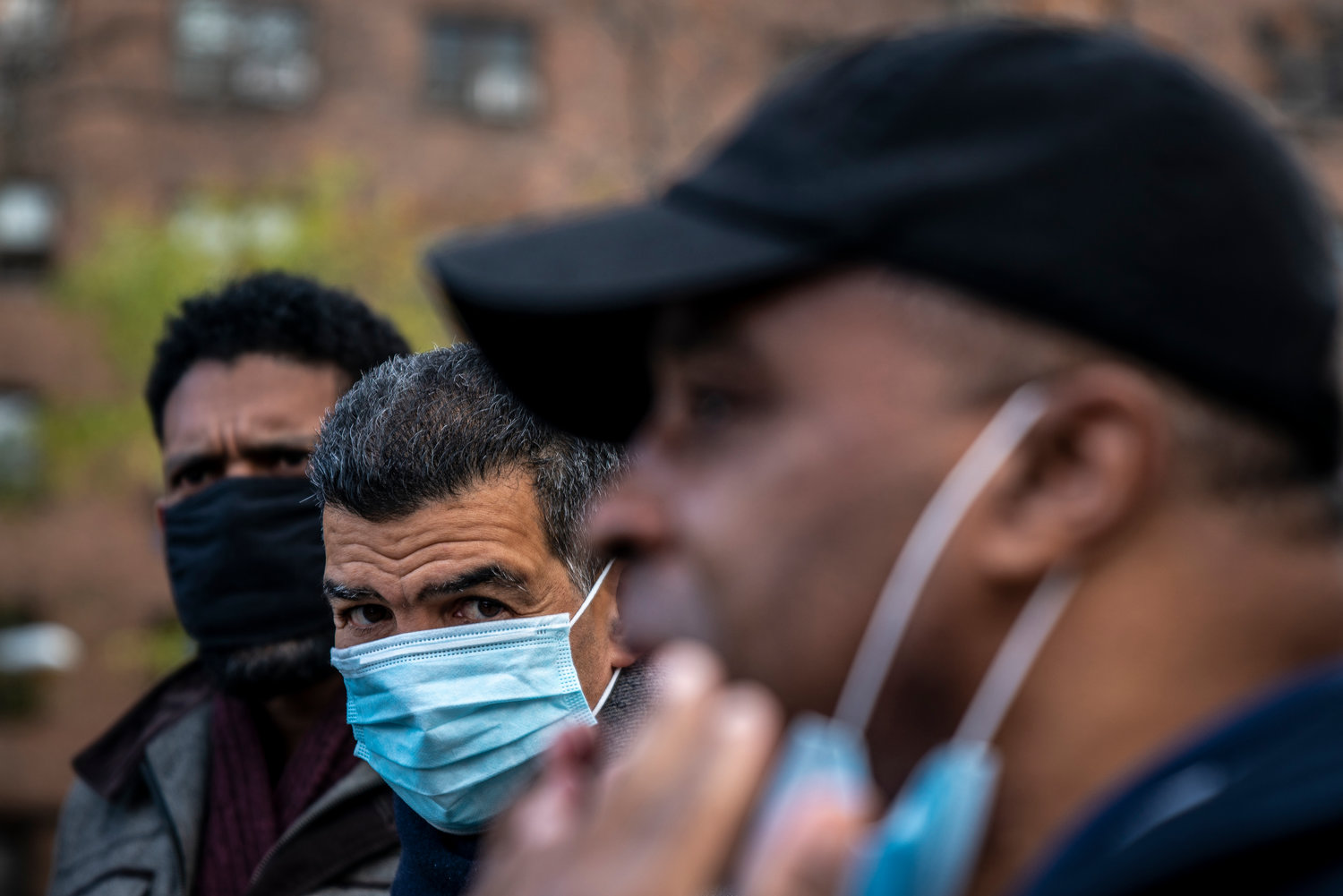 Councilman Ydanis Rodriguez — who chairs the city council’s transportation committee — wants to make transportation options more affordable and available for his lower-income constituents. And he hopes an e-scooter pilot program this spring will help make that possible.
HIRAM ALEJANDRO DURÃN
Previous Next
By ROSE BRENNAN

The city’s transit landscape fundamentally changed in 2013 when the blue behemoth of Citi Bike began popping up around the city. Eight years later, the popularity of those bicycles remains strong, providing a number of options ranging from leisurely rides through Central Park to a quick cross-town trip when a subway or bus might not be available.

But while they might be a dime a dozen once someone crosses into Midtown, Citi Bikes haven’t quite made their way into this part of the Bronx. And that could pose problems for many who could use such modes of transit more for necessity than pleasure.

Similar to “food deserts,” where access to consistent and healthy food is difficult to come by, “transit deserts” are areas where public transportation options are far away, expensive — or both. And while the city’s mass transit system is usually ranked among the best in the country — if not the world — some still find themselves without easy access to quick and easy ways of getting around.

There are a few north-to-south mass transit options here, but getting across the Bronx is an entirely different story. And private options like taxis, Ubers and Lyfts can certainly add up financially — and they’re not immune to getting stuck in city traffic.

The problem remains: How can Bronx residents get access to the rest of their borough without breaking the bank?

Councilman Ydanis Rodriguez is on the case. His Manhattan district includes Marble Hill, and he has an even bigger job: chair of the council’s transportation committee. He’s hoping a new transportation pilot program will help address transit deserts throughout the borough, as well as the city as a whole.

The pilot program he’s championing seeks to implement electric scooter stations in the outer boroughs, especially in areas where Citi Bikes aren’t available. That wouldn’t have been possible through most of early 2020, as e-scooters and e-bikes weren’t legal. But the spring state budget process changed all that, with additional regulations passing the city council within months.

Rodriguez hopes the city council can get an e-scooter pilot program under way as early as next month.

“What we have seen with the expansion of other modes of transportation — such as rental electrical cars, Zipcar, Citi Bike — is that we don’t have the same percentage of Black and Latino and poor New Yorkers having the resources to get a membership (for) the bike, or being able to rent the electrical car,” Rodriguez said.

The e-scooters for the demonstration were provided by Lime, a “micromobility” company planning to participate in the upcoming pilot program. The goal of the program is not to just make the e-scooters affordable, according to Lime spokesman Russell Murphy, but to also encourage riders to use public transportation more — especially as the Metropolitan Transportation Authority grapples with an unprecedented budget crisis in the wake of the coronavirus pandemic.

“We don’t try to pull people away from transit,” Murphy said. “What we want to do is pull people out of cars. I think if we’re moving people away from cars, our streets become safer. Our air becomes cleaner. And we just have a little bit (of a) calmer city to live in.”

A customer benefitting from the pilot program, for example, could be someone who works near the Bronx Zoo, he said. Rather than taking an Uber or a long bus commute with a transfer or two, that person could ride an e-scooter to the nearest 2 or 5 subway station, and take the train the rest of the way there.

While Lime is not exactly sure what affordability options will be available for low-income riders, Murphy shared some of the programs the company uses in other major cities, including reduced-price rides and five free rides per day for customers on public assistance.

“We really do strive to make sure that our services are accessible to everyone,” Murphy said. “This is really trying to reach audiences and reach communities that can really have this transform their ability to find work, to access health care, to access education, cultural opportunities (and) recreation.”

Dan Padernacht, chair of Community Board 8’s traffic and transportation committee — and a city council candidate himself — said he plans to invite a representative from the city’s transportation department to an upcoming meeting in the near future. As the pilot program plans to specifically target boroughs outside of Manhattan with no Citi Bike ports, it’s almost certain CB8 will be a pilot program focus.

The community’s reception of that program, Padernacht warns, could be divided.

“I think we’re going to have mixed reactions, mostly due to concerns of illegal use of e-scooters and safety issues,” he said. “Beyond that, the proper use of e-scooters is an environmentally friendly and cheap way to travel in our community.”

Padernacht is personally in favor of the program coming to CB8, but harbors some of the same concerns he anticipates some neighbors may have. Still, he thinks there are solutions to combat some of those worries.

“I am … concerned that users of these e-scooters will not have the necessary experience to navigate traffic on local streets,” Padernacht said. “Therefore, I think it’s important for the DOT to have vendors provide training programs across the city so that riders are comfortable navigating the city streets before they get on them.”