Seeking a path forward during a crisis 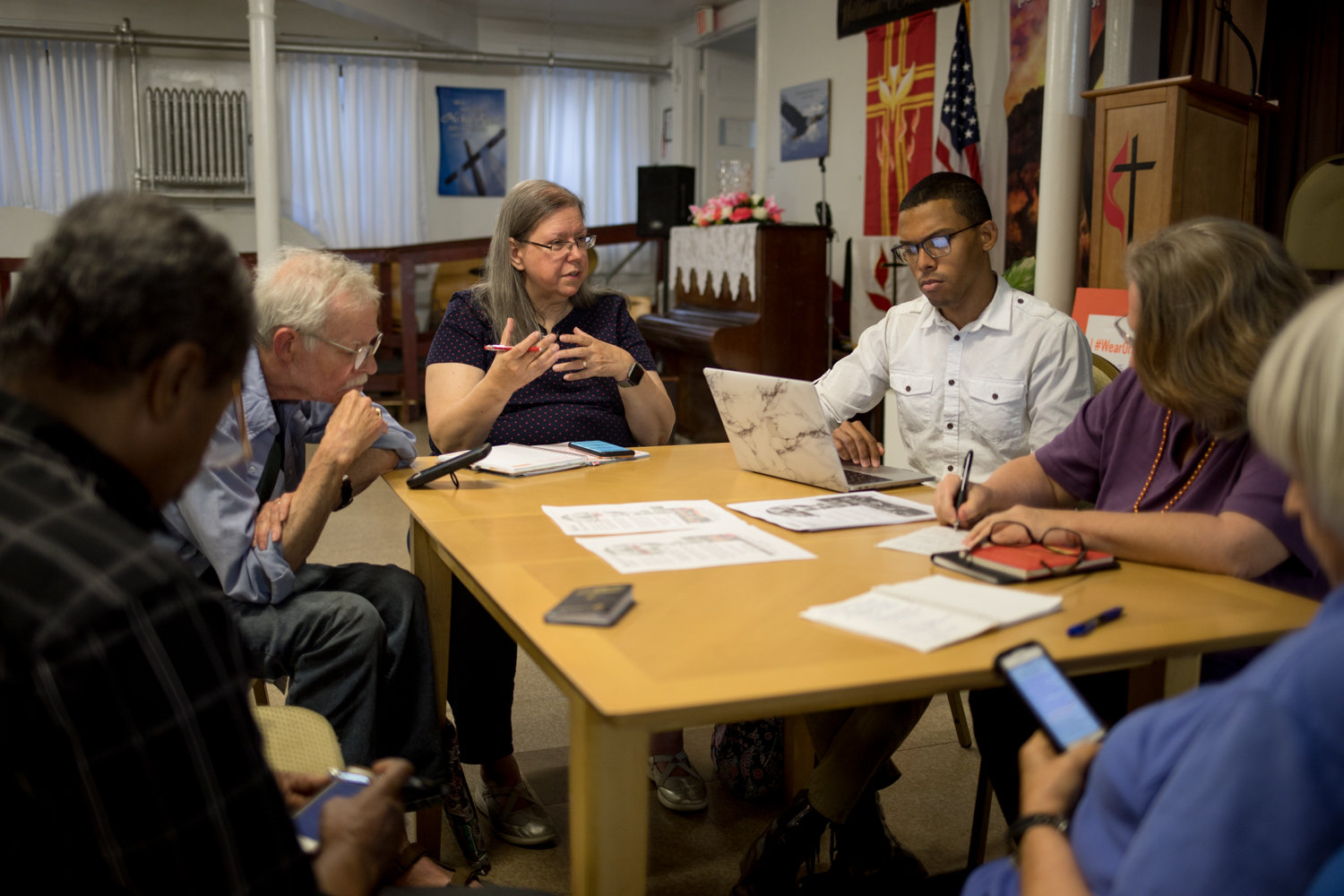 Jone Johnson Lewis, leader of the Riverdale-Yonkers Society for Ethical Culture, center, is adapting to taking the organization’s services and activities online as the coronavirus pandemic has caused many people to stay at home.
JULIUS CONSTANTINE MOTAL / File 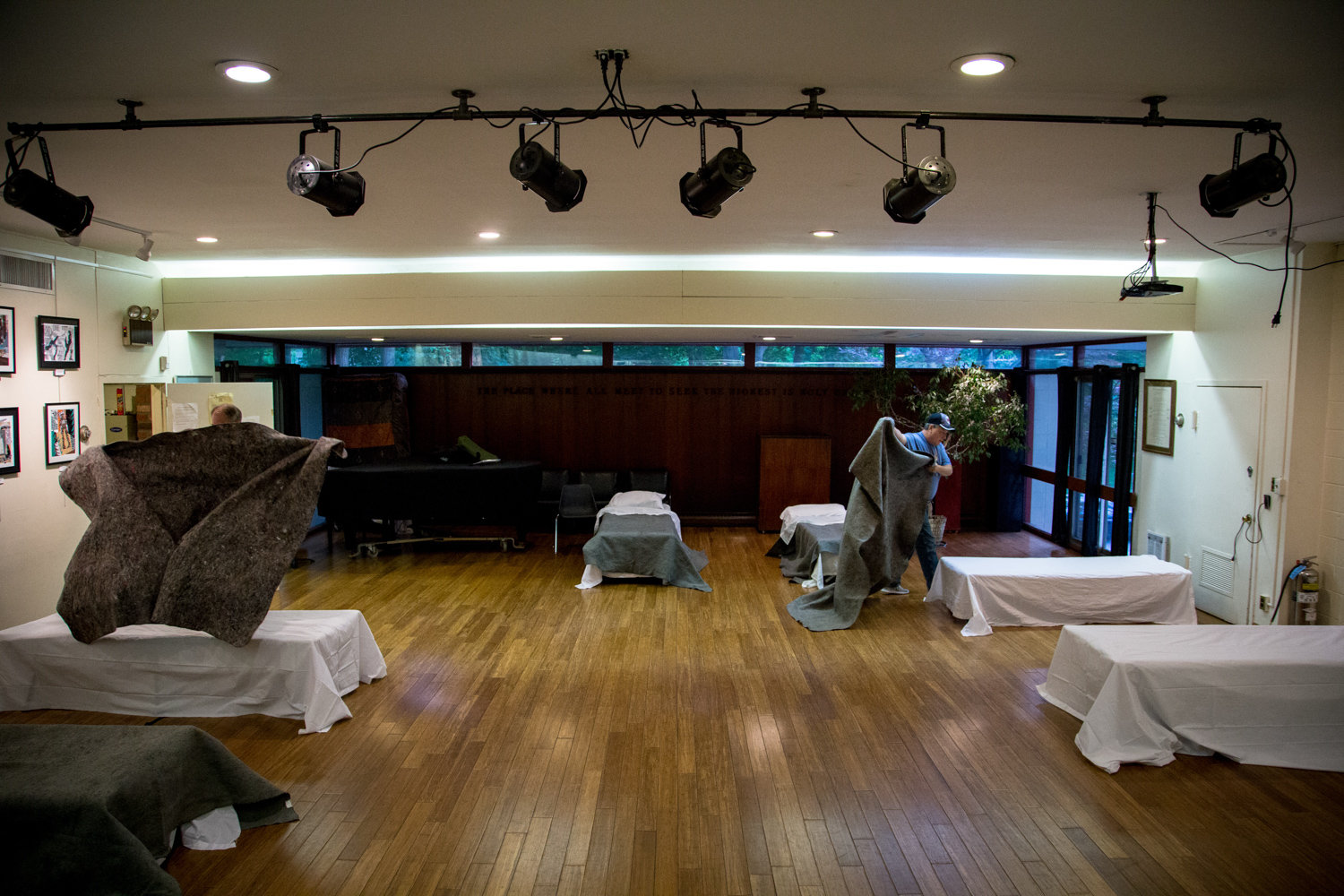 As a consequence of the coronavirus pandemic, the Riverdale-Yonkers Society for Ethical Culture has suspended its weekly overnight men’s shelter. It was too difficult to ensure that staff members and people in need of housing would be safe from illness.
EIAN KANTOR / File 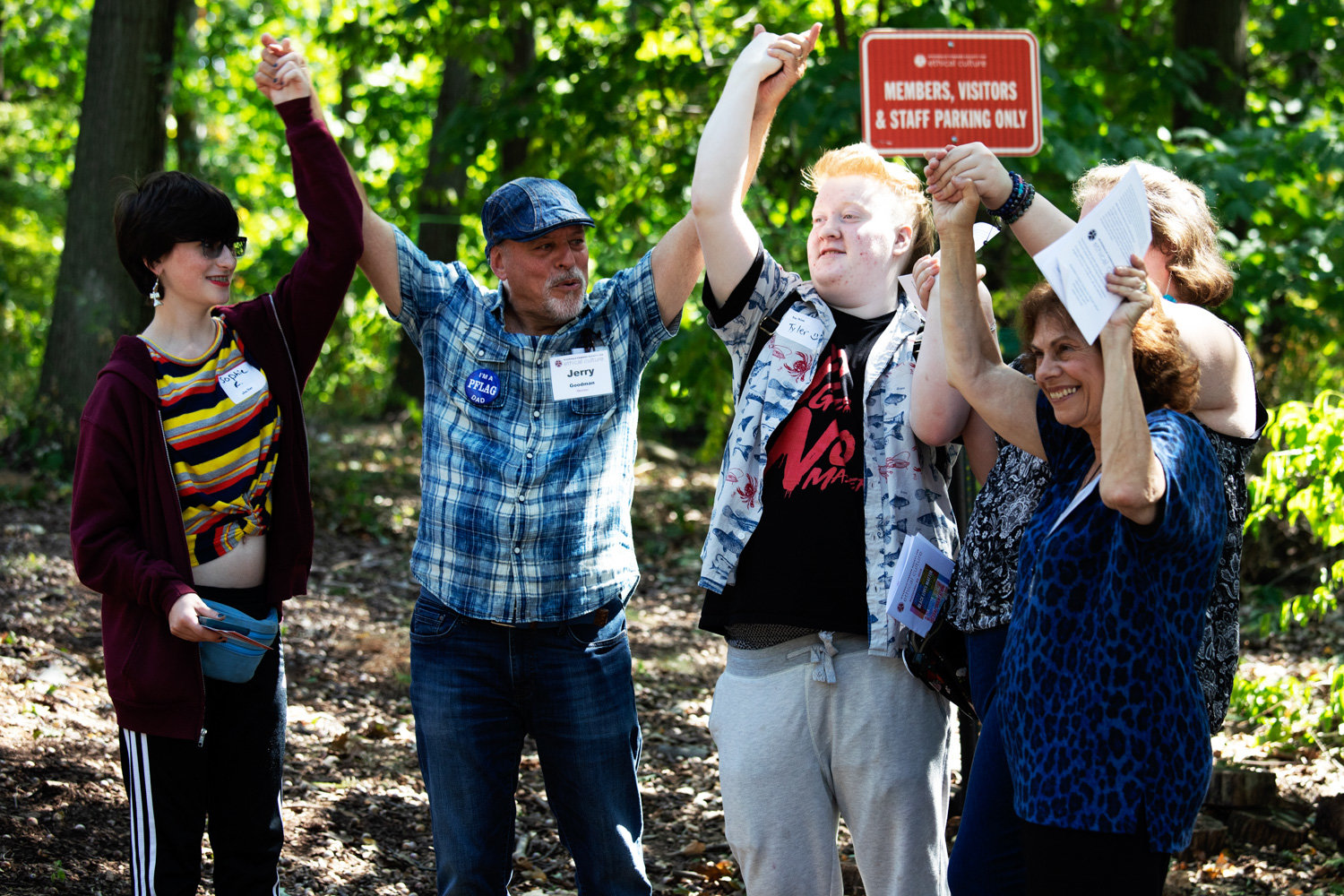 Jerry Goodman, second from left, cheers with attendees of a flag unveiling ceremony for the organizations PFLAG and Black Lives Matter at the Riverdale-Yonkers Society for Ethical Culture last year. The society has moved to take its services and activities online in response to the coronavirus pandemic.
HIRAM ALEJANDRO DURÁN / File 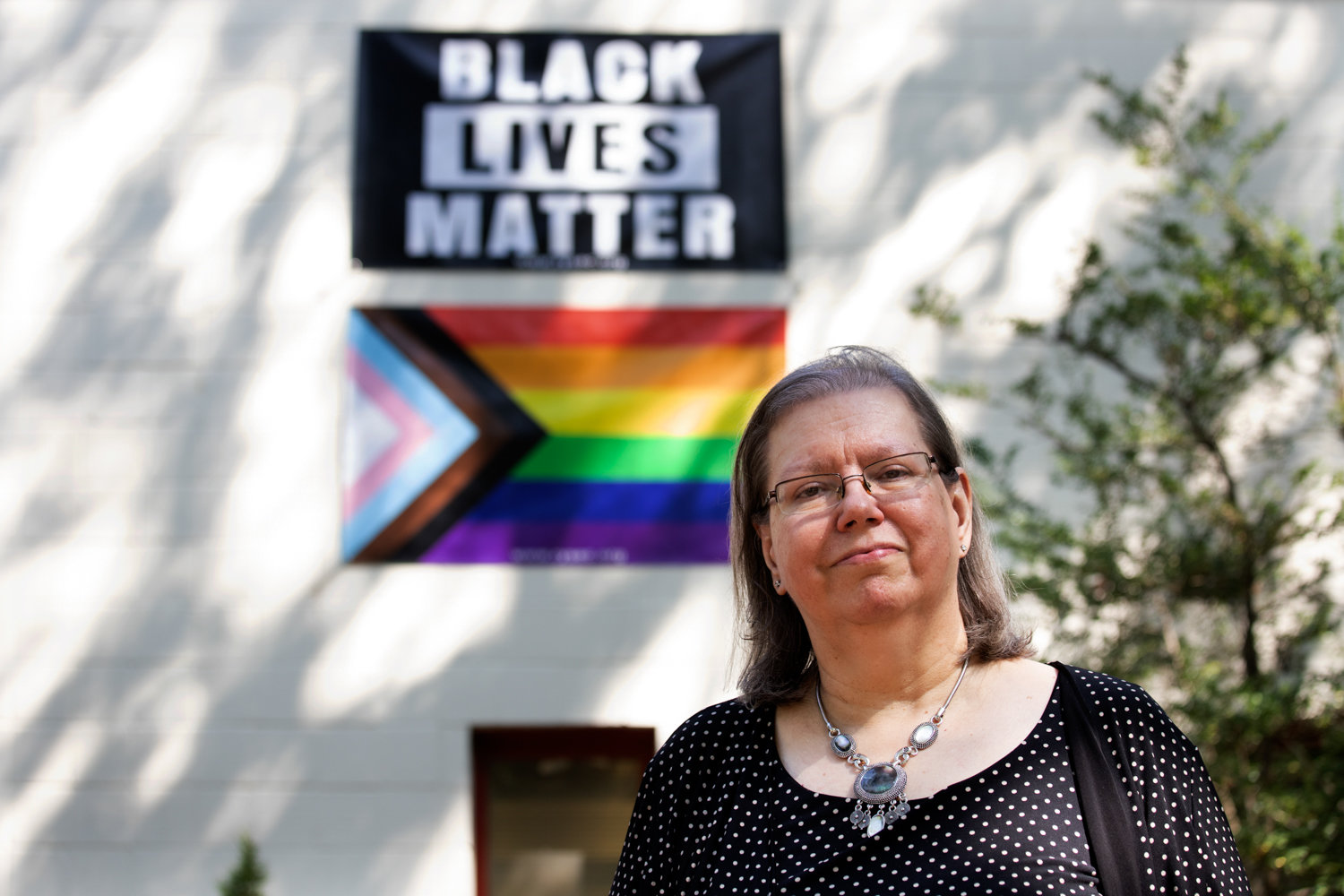 Riverdale-Yonkers Society for Ethical Culture leader Jone Johnson Lewis finds that it’s difficult not to talk about the coronavirus pandemic, and to that end, she and her colleagues have called people to check in on them.
HIRAM ALEJANDRO DURÁN / File 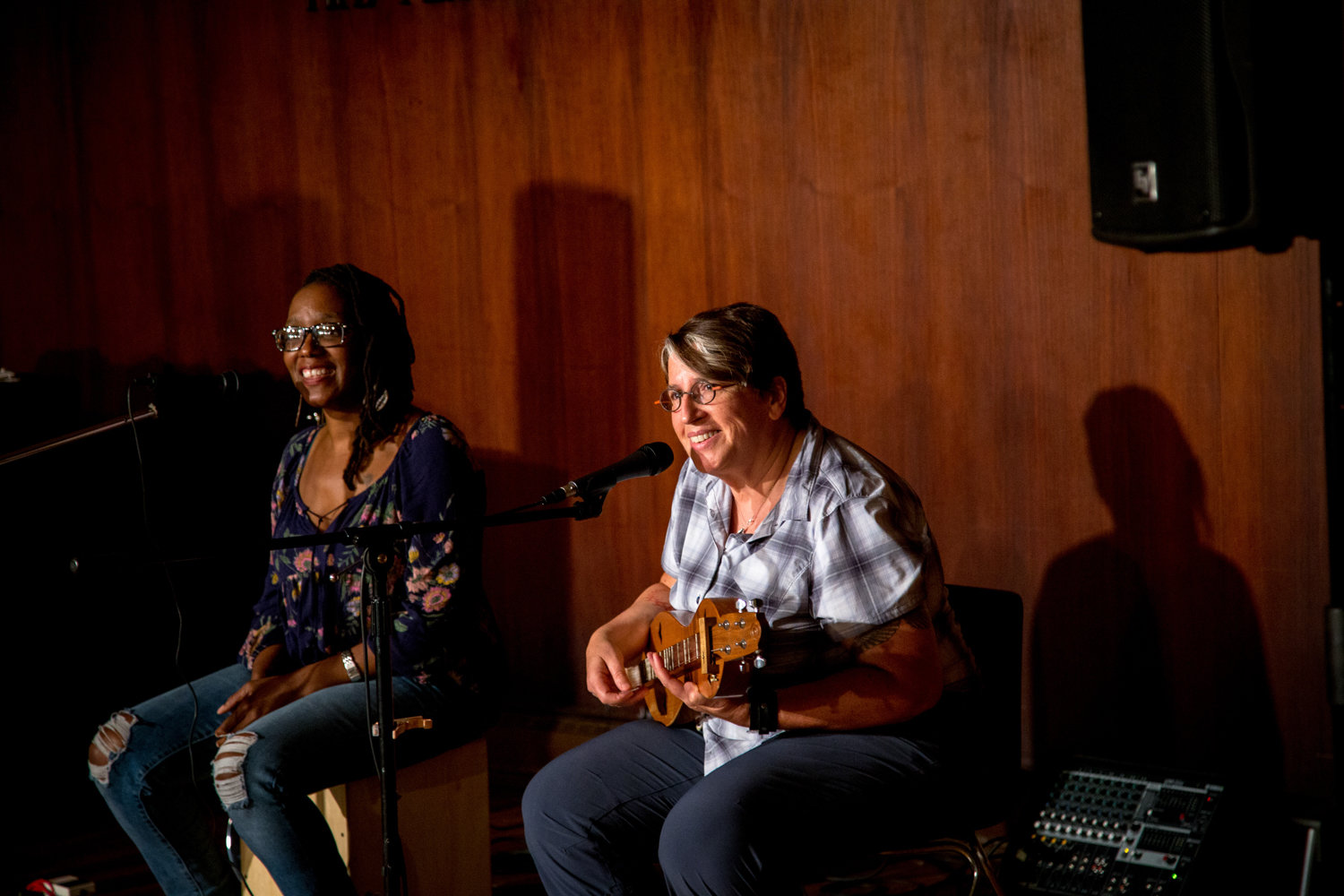 DK & the Joy Machine, right, plays folk music with Lindsey Wilson, left, during a Coffee House event at the Riverdale-Yonkers Society for Ethical Culture in 2018. Live performances can no longer be found at the society as a consequence of the coronavirus pandemic.
EIAN KANTOR / File
Previous Next
By KIRSTYN BRENDLEN

There’s usually something going on at the Fieldston Road meetinghouse for the Riverdale-Yonkers Society for Ethical Culture. It all starts with weekly Sunday services and continues with a plethora of other programs — “Ethics on Tap” at An Beal Bocht Cafe, and a recent folk concert on a Tuesday afternoon. And that doesn’t even include many of the organization’s social programs, like its weekly overnight emergency shelter for the homeless.

Yet, because of the coronavirus crisis, all of those programs have been canceled, and various meetings — like so many religious services — have been moved online for now as the society adheres to social distancing measures implemented statewide.

Some programs have already been livestreaming online, said Jone Johnson Lewis, the local society leader, so moving online in light of the coronavirus crisis hasn’t been a technical difficulty for the overall group.

“People arrive a little bit early and it’s kind of like a social time as they greet each other and say hi,” Lewis said. “Many haven’t seen each other now for several weeks.”

She has kept the topics of the services mostly the same. “Why We Need Immigrants” and “Liberation Ethics” were on the calendar for the end of March and the beginning of April, and she wasn’t planning on making any changes to that simply because of the pandemic.

But there’s one thing that has been hard to recreate for online audiences.

“The music has been the hardest,” Lewis said. “The regular musician has been doing her best to provide music from her home. The quality isn’t the same, and you can’t sing together and hear each other. And that’s a real loss, I think.”

Members have shifted another tradition that usually has to be done in person into their weekly video chat.

“We have a place in our Sunday meeting where people can share major joys and concerns in their lives,” Lewis said. “When we’ve done that in person, people come forward, put a flower in a vase, and share, and then go back and sit down.”

Now, however, Lewis includes a picture of a flower on the screen, asking those participating to raise their hand virtually to be called upon.

There have been some more accommodations made to help society members deal with the effects of COVID-19. Staff members and volunteers are making the rounds and calling as many as they can to check in and see if they need anything.

“We’re expecting that if this goes on for a while,” Lewis said, “those calls will become more frequent, and more important.”

They also have two different online meeting groups — one to air concerns about the virus, and one where virus talk is not allowed.

There, people who need a break can share pictures of their grandchildren and pets.

“We try to preserve as much of the structure as we can, because this is a time where people need something familiar,” Lewis said.

Some things have been pushed squarely into unfamiliar territory. The society’s emergency overnight homeless shelter has been suspended since the safety of staff members, volunteers and those in need of a bed for the night couldn’t be guaranteed. They’re trying to support parents who suddenly find themselves at home with children as New York City public schools are closed until at least April 20.

The Ethical Culture Society is a non-theistic organization — while there are elements that are shared with major religions, a god is not one of them.

The Riverdale-Yonkers Ethical Culture Society’s website spells out the core tenets of the group: “We are dedicated to creating a more ethical world where every person’s worth and individuality might flourish. Compassion and reason guide our actions.”

A focus on creating a more ethical society has taken on a new meaning in a time where the best thing most people can do right now is stay home and avoid human contact as much as possible.

“Our primary purpose is to help people focus on ethics as the center of their actions,” Lewis said. “Part of that is tending to our relationships, which right now means people need to spend time on self-care and care of others in their immediate circle.”

Taking care to spend time at home, rather than going out and about for their normal activities, isn’t just a sacrifice.

“All these actions we’re taking now are the greatest act of social solidarity I’ve seen in my lifetime,” Lewis said. “Because people are making these sacrifices so that others may live, largely.”

Looking at those actions as an act of service and solidarity can give people a reason to stick with their social distancing, she added. Many society members have continued working on the same issues that have concerned them in the past, but now with new passion as the virus spreads through the city.

“We’ve always had a concern for people who are the most marginalized,” Lewis said. “And I think that is something that people have done the best they could from their homes, to continue to be active on. To continue to inform people, to make calls to decision-makers to say we need to protect the most vulnerable in this time.”

In a recent email discussing “ethics in the time of coronavirus,” Lewis said she encouraged readers to look toward the future, when life starts to return to some sense of normalcy.

“One of the things to focus on is who do we want to be when this is over,” Lewis said, “and to let that guide our actions now.”