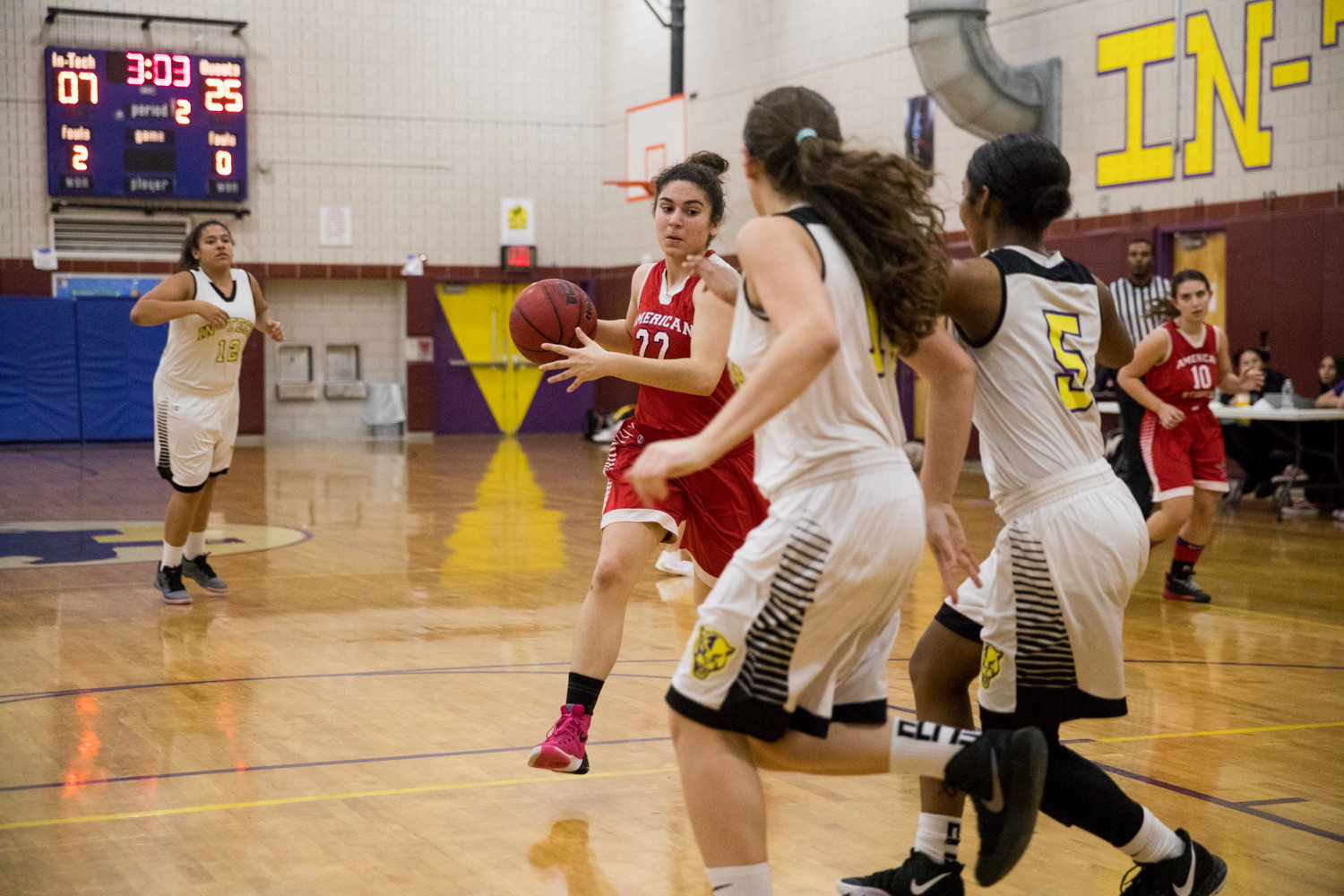 American Studies’ senior Emily Eljamal makes her way to the basket during a game at IN-Tech, a contest which saw her reach the 1,000-point career mark.
JULIUS CONSTANTINE MOTAL 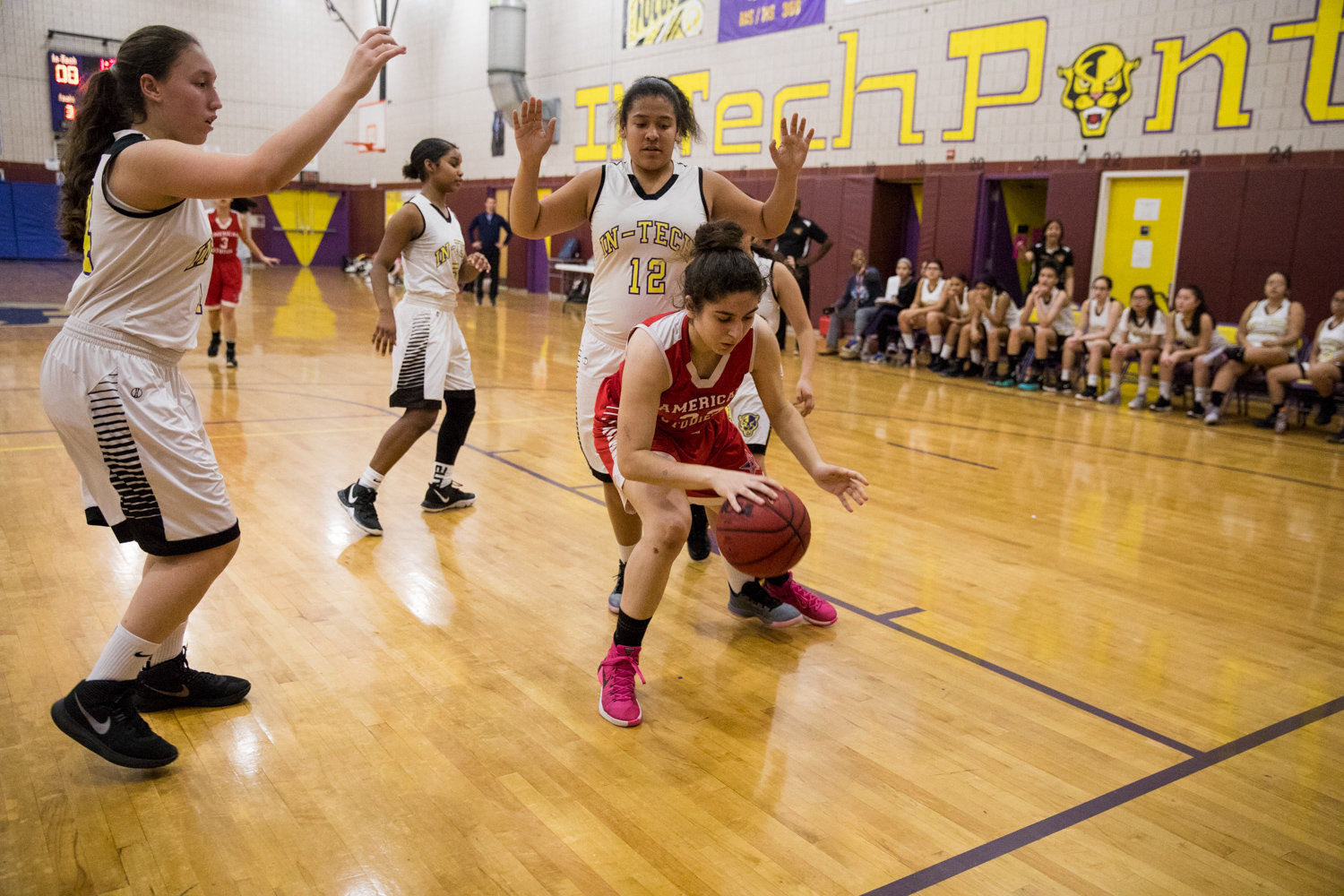 The wait for history was a short one.

American Studies’ senior Emily Eljamal needed just three points to take her place in school history as the Senators’ first 1,000-point scorer. And she wanted to get it over with quickly.

First she logged points Nos. 998 and 999 with a basket in the opening minutes of American Studies game at IN-Tech last week. Then it wasn’t long before she had the opportunity to become the first player — girl or boy — to reach the 1,000-point plateau at the school. So as she stepped to the line for two free throws early in the game, Eljamal told herself, “Let’s do this.”

Then she misfired on the first free throw.

“When I missed the first one I was like, ‘OK, I’ll make the second one.’” Eljamal said. “So I just took a deep breath and I made that second one. Then I felt like I completed my goal.”

There were no wild celebrations by her Senators teammates, no game stoppage to award her the game ball as a precious souvenir. No, just play on and grab another win for the Senators. Just the way Eljamal wanted it.

“It wasn’t a home game so we didn’t have a chance to celebrate as much as we wanted to,” said Eljamal, who finished with a game-high 22 points in the Senators’ 54-33 win over IN-Tech. “But I know all my teammates have been waiting for this as long as I have, so I felt their support. Before the game everybody was telling me, ‘You only need three more points.’ So I just wanted to get those three points and then just play the game.”

And just as in most of the Senators’ games this season, it was over early. American Studies jumped out to a 15-5 lead after one quarter and held a comfortable 31-10 advantage at the half. And by the time the third quarter ended with American Studies up 44-18, the game was all but officially decided, and Eljamal’s day was over.

Becoming the first basketball player in school history to reach 1,000 points was the achievement of a goal Eljamal set for herself several seasons ago.

“In my sophomore year coach (Ryan Hondorf) told me, ‘You know, you could probably reach 1,000 points if you worked hard,’” Eljamal said. “That’s when I was like, ‘OK, that’s one of my goals.’ So it feels good to reach it. I didn’t expect this coming in here in my freshman year, but I’m glad all my hard work has paid off.”

Hondorf is in his fifth season coaching at American Studies, and knew early on he had a rare player in his program with Eljamal.

“It’s hard to put into words what Emily has meant to this program,” Hondorf said. “From the time she came in here as a freshman, I knew she was going to be special. She had the skills and she was a very coachable player from the time she came in. Anything that I presented to her, she just took it and used it out on the court.

“But her motivation to get better and better, I think, that’s really a big reason why she got to that 1,000 points.”

Eljamal’s teammate, senior Jackie Harari, created a celebratory sign for the occasion, parts of which read “Emily” and “1,000 points.” Another part of the sign can’t be printed here.

“It was made at 1 a.m.,” Harari said as both she and Eljamal laughed. “But it’s all from the heart.”

So with no celebration during or after the game, how was Eljamal planning to commemorate her crowning achievement? Perhaps a dinner out with mom, Celia, who attended the game?

Her place in school history now secured, what does American Studies have in store to honor its greatest basketball player? Maybe an Emily Eljamal bobblehead day?

“Yeah we could do that, for sure,” Hondorf said, with a laugh. “That would be great.”

But perhaps retiring Eljamal’s No. 22 jersey would be a fitting tribute?

“I’m going to have to speak to my athletic director about what we need to do to make sure that this is appreciated and celebrated the right way,” Hondorf said. “I think maybe putting her jersey in the school’s trophy case would be something really special because this is a big deal.”

Eljamal still has more games to add to her record totals. But whenever her career does end, she knows it will never be forgotten at American Studies.

“When I leave after this year,” Eljamal said, “everyone will remember that I was the one who got to 1,000 points.”