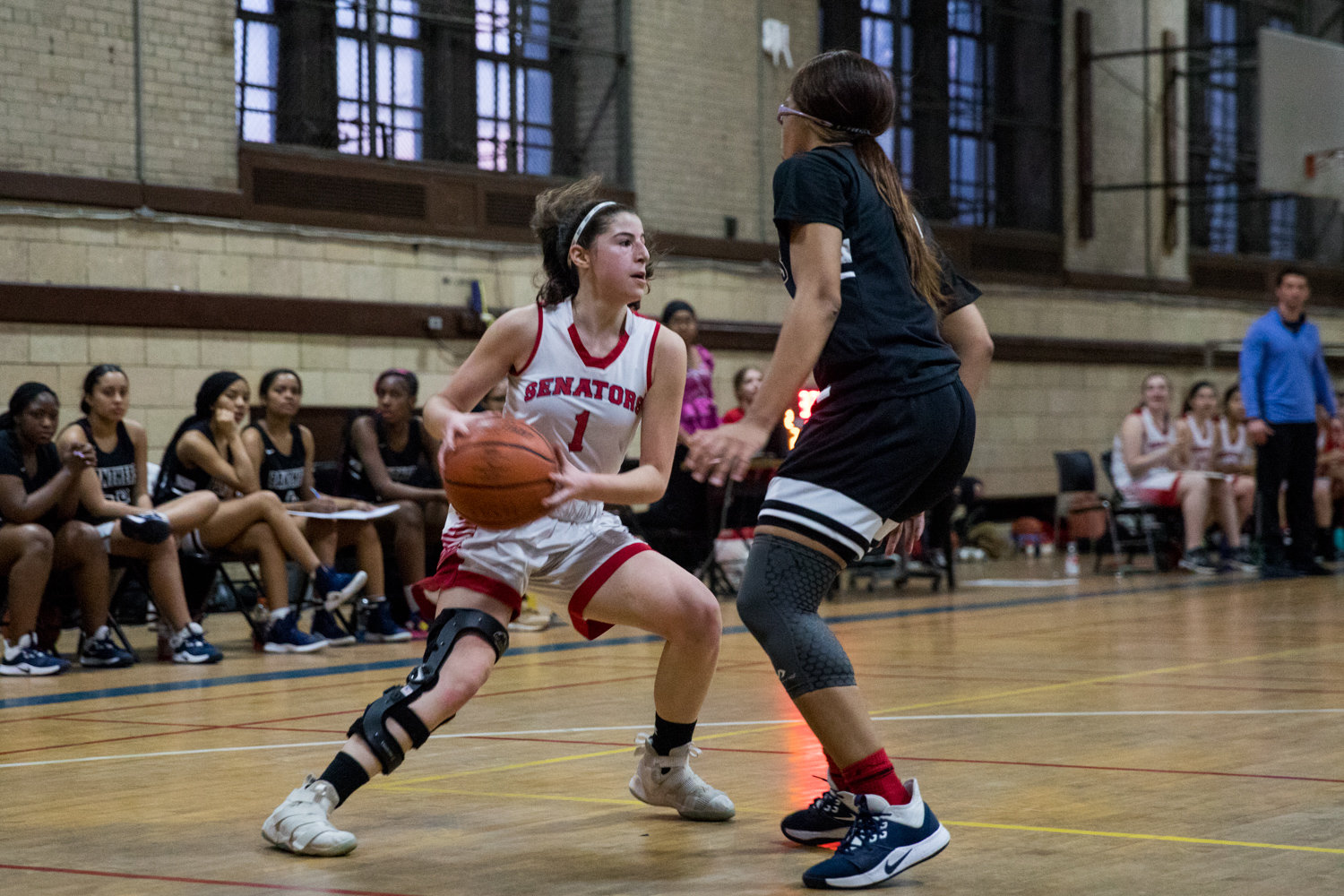 American Studies’ senior guard Jacqui Harari scored 16 points in what turned out to be her final game for the Senators, a 67-55 playoff loss to Achievement First Brooklyn.
JULIUS CONSTANTINE MOTAL 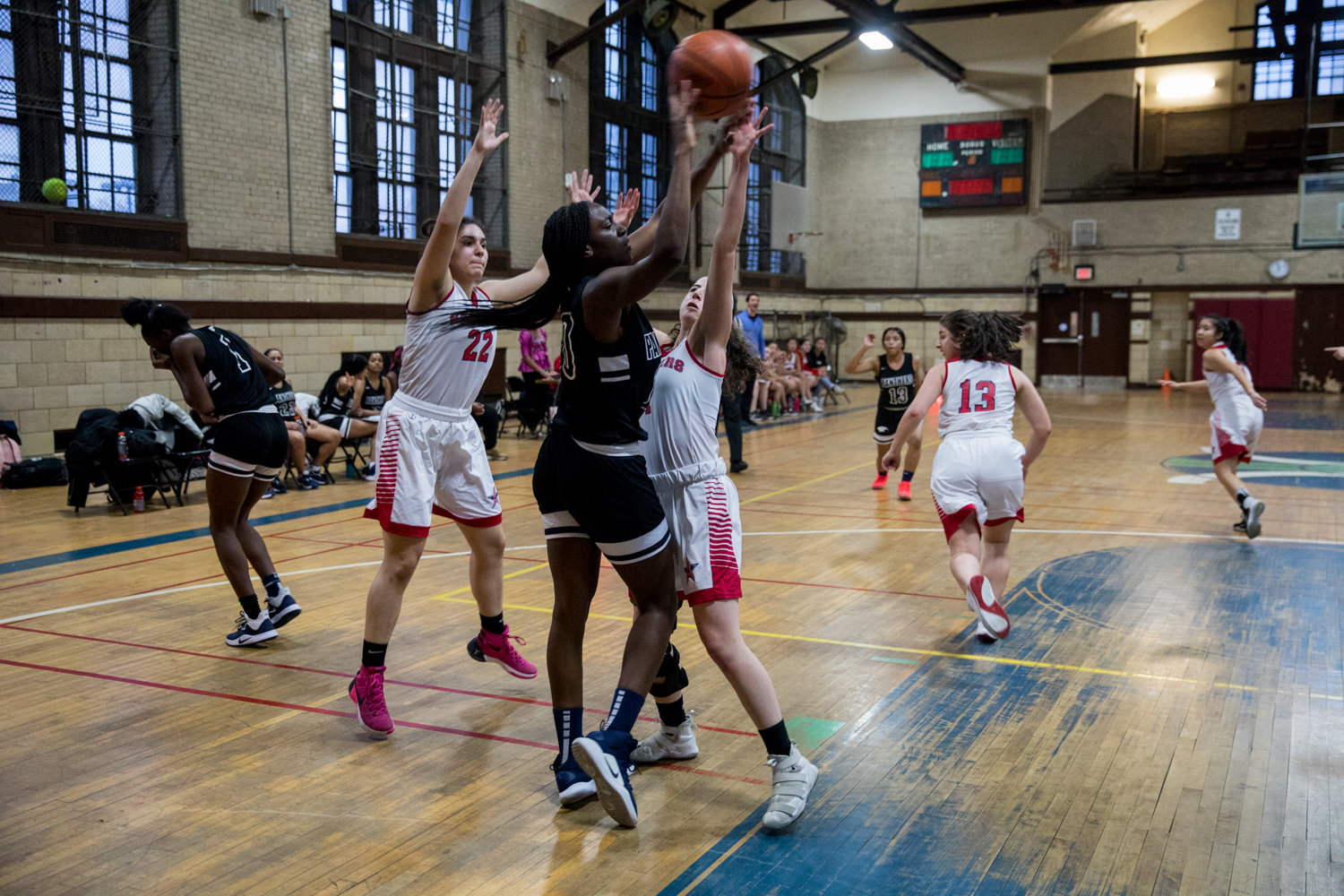 American Studies’ seniors Emily Eljamal (22) and Jacqui Harari put up their best defense against Achievement First Brooklyn, but it wasn’t enough to prevent a 67-55 loss.
JULIUS CONSTANTINE MOTAL
Previous Next
By SEAN BRENNAN

Last week brought an unexpected surprise to American Studies in the form of a second home playoff game. One that came after the Senators’ senior core of Jacqui Harari, Emily Eljamal, Cayla Klein and Emma Bartolazo had already said their goodbyes to their home gym after their first-round playoff win over Community Health Academy.

But an upset of Inwood Academy by a program out of Brooklyn, Achievement First Brooklyn High School — the 52nd seed in the Public School Athletic League postseason tournament — handed the No. 20 Senators the rare second game at home.

So with a packed house at the Old Gym at Lehman College, and in front of a very vocal bunch of American Studies’ fanatics, things seemed to be lining up nicely for a long playoff run for these Senators due to their unexpected good fortune.

But what was also unexpected was the play of Achievement First Brooklyn, in general, and Amiyah McCord in particular. McCord helped spur a 14-0 run by Achievement First to open the second half, scoring nine of her game-high 31 points in that spurt, to blow open what had been a three-point game at the half,  cruising to a 67-55 victory over American Studies.

It was the second straight upset win for Achievement First after its win over Inwood Academy, and it was also one that ended American Studies’ season and the careers of the Senators’ senior Fab Four.

“That changed everything,” Senators’ head coach Ryan Hondorf said of the pivotal second-half run by Achievement First. “There were a couple of turnovers, they hit a couple of big shots, and they are a really athletic team. They can score points very quickly.”

After trailing 30-27 at the half — and with the large crowd urging the Senators on — it was expected the No. 52 team in the tournament was ready to take its bows and graciously exit the postseason stage. Surely Eljamal, Harari and company would go to work, whip the crowd into an even louder frenzy, and give the senior Senators one last victory at the Old Gym.

But Achievement First was having none of it.

The 14-0 run to start the third quarter gave them a 44-27 lead, and the Senators were left wondering, “What just happened here?”

“Coming in we knew we wanted to double-team (McCord), but it all changed when the fast breaks started to happen,” Hondorf said. “It was just very tough to defend them because of the size disadvantage.”

That distinct height advantage did not go unnoticed by the Senators, even before the game tipped off.

“We definitely noticed it when they walked into the gym,” said Harari, who finished with 16 points in her final game. “We worked our hardest on rebounds, but (the referees) got us on a lot of over-the-back calls.

Achievement First’s lead eventually grew to 21 points at 56-35 before the Senators embarked on a spirited comeback, one that brought them within 56-47. But they could never get any closer, and the stellar careers of Eljamal, Harari, Klein and Bartolazo were over.

Afterward, Hondorf spoke with his team and what his senior class has meant to both him and the school.

“I just told them how proud I was of them and let them know even though things might be over, we’ll be a team forever,” Hondorf said. “Those four seniors, they won the most games in school history in their four years (going 51-13). They set records and left their mark at this school. Ever since they were freshmen, I knew they were going to be a very special group. They mean everything to our school.

“We’re going to miss them, and it’s going to be very hard to replace those four.”

Neither Harari nor Eljamal were in a particular hurry to leave the Old Gym after the final horn, choosing instead to take it all in one last time.

“Basketball is my life,” Harari said. “I don’t even know how else to put it.”

Nearby, Eljamal did her best to hold back tears.

“The court is like my second home, and this team has been like my family,” said Eljamal, who finished with 18 points in her swan song game. “We’re not only friends on the court, but we’re also best friends off the court. Basketball is where we all made really good friendships. It’s very hard to say goodbye.”

Then the duo was asked how hard it will be to take off their jerseys for the final time. Neither felt they could ever part with them.