Send kids back to campus? Or keep them home? 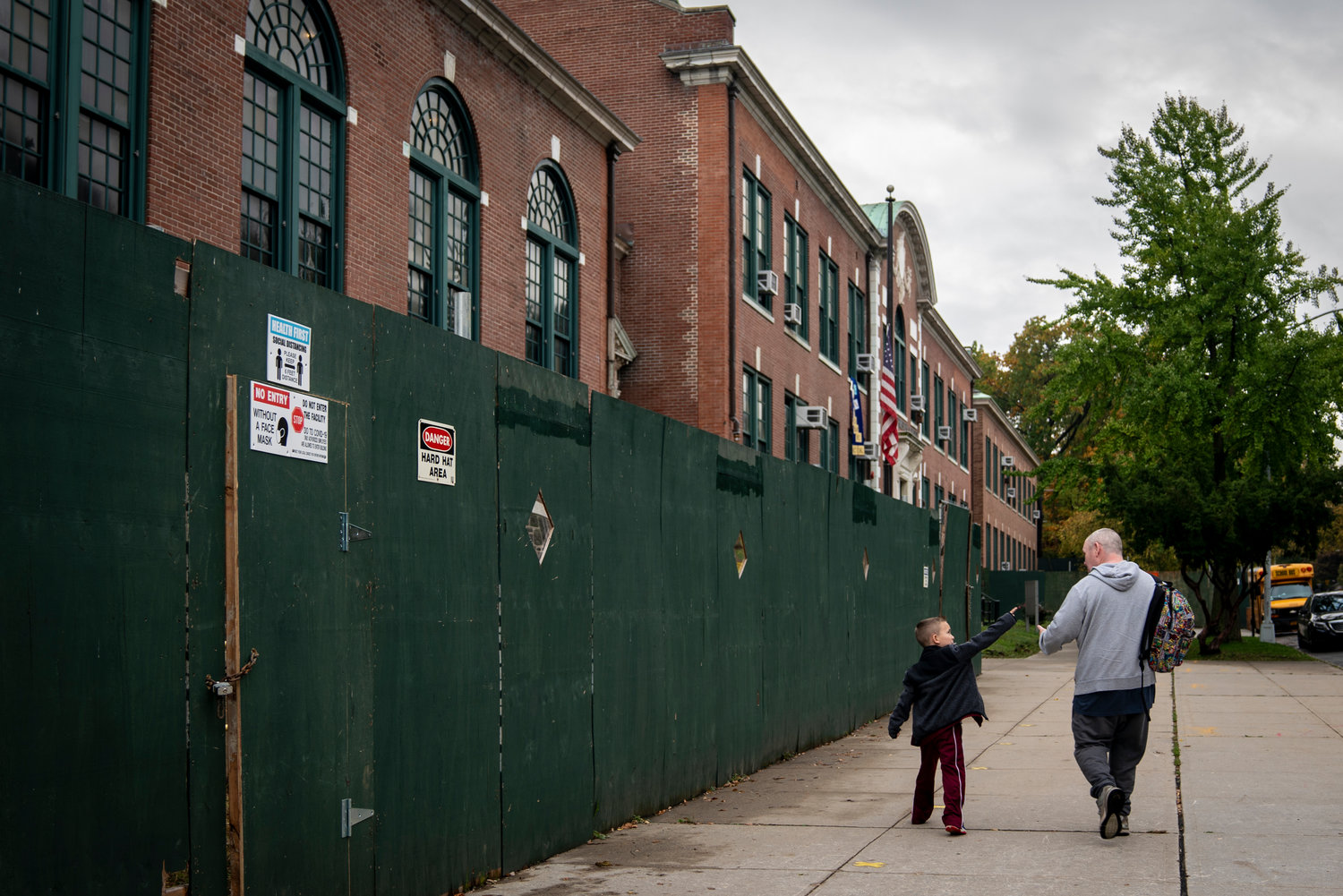 A father and son walk past P.S. 81 Robert J. Christen. Public school parents face a difficult decision in the upcoming days — should they opt for hybrid learning? If not, their children will remain remote for the rest of the academic year.
HIRAM ALEJANDRO DURÁN 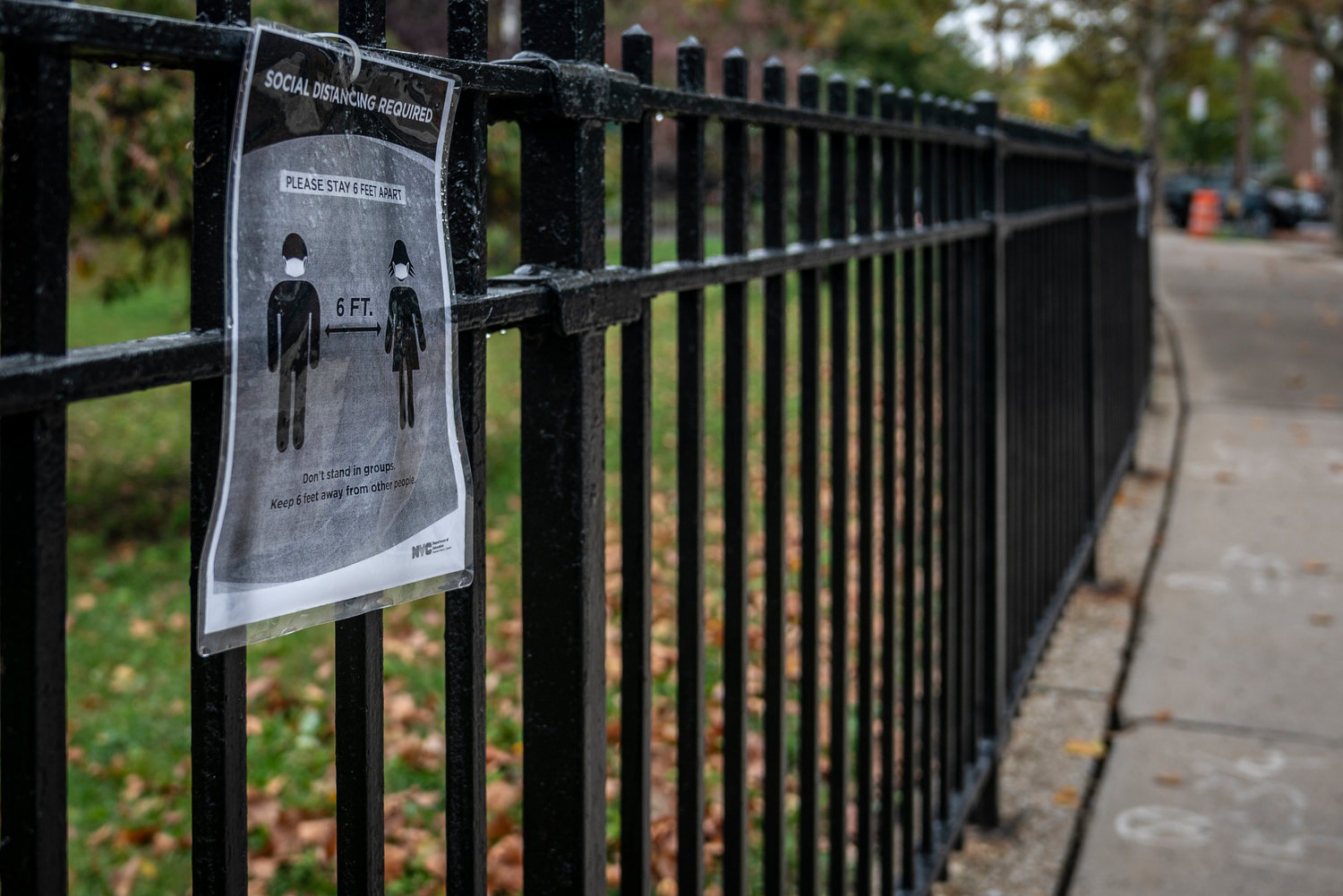 Public school parents were originally supposed to have multiple ‘opt-in’ windows for their children to switch from remote classes to hybrid. But that changed last week when the city announced the upcoming November window would now be the parents’ only opportunity to do so.
HIRAM ALEJANDRO DURÁN 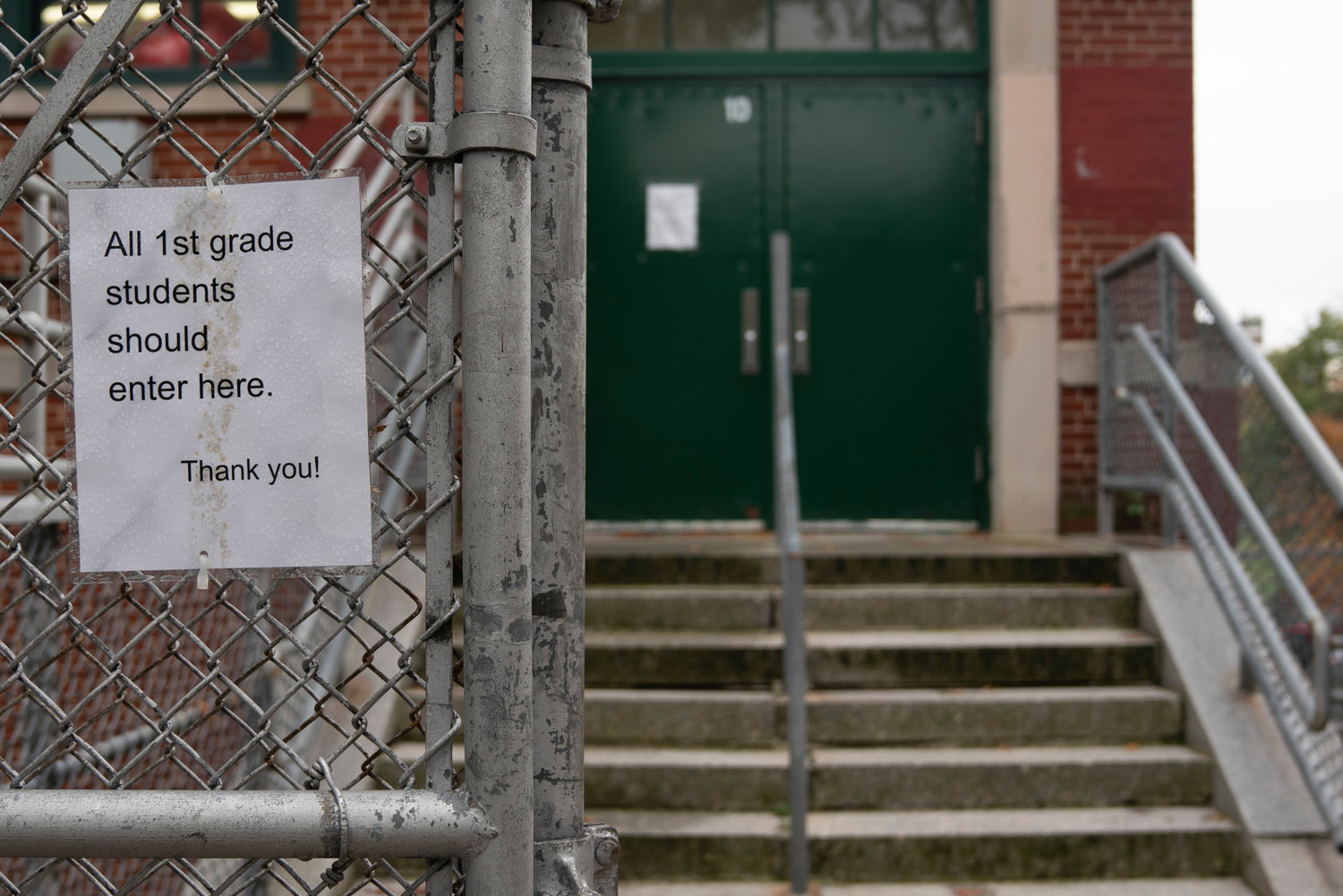 As of right now, parents can switch between hybrid and remote classes for their children at any time. But if they want to do the other way around, they’ll need to make that decision by Nov. 15. There were supposed to be multiple ‘opt-in’ windows throughout the academic year, but the city changed its mind last week.
HIRAM ALEJANDRO DURÁN 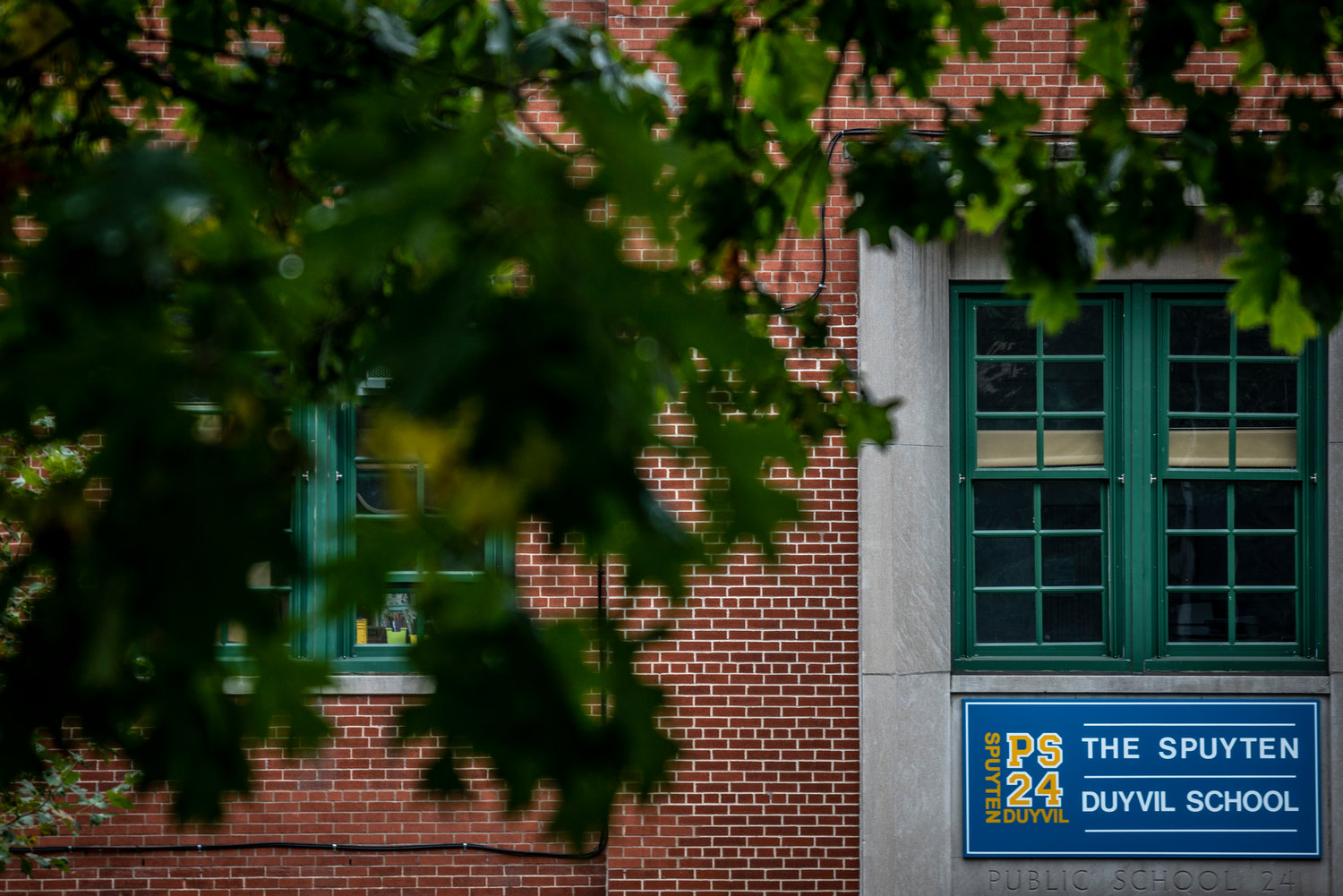 P.S. 24 Spuyten Duyvil closed for two weeks Oct. 22 after two students tested positive for the virus that causes COVID-19. Nevertheless, in the next few days, public school parents across the city will need to choose between hybrid and remote classes for their children. If they choose the latter, they will remain remote for the duration of the academic year.
HIRAM ALEJANDRO DURÁN 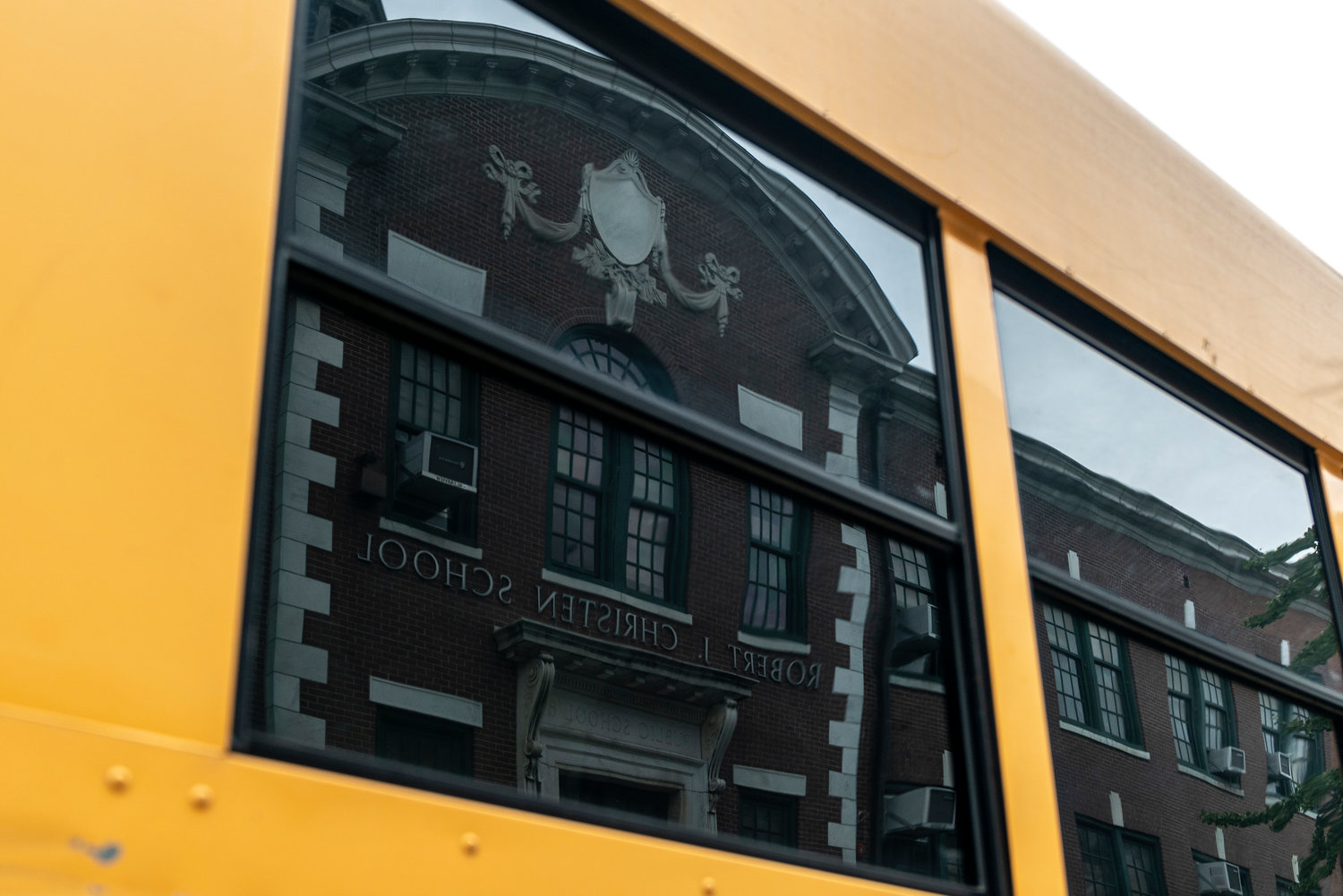 Only about a quarter of public school students are attending in-person classes — a far cry from what was originally reported to be nearly half. The city, however, is looking to boost that number, and now this month’s opt-in window for hybrid learning will be the only opportunity for parents to send their children back into school buildings this academic year.
HIRAM ALEJANDRO DURÁN 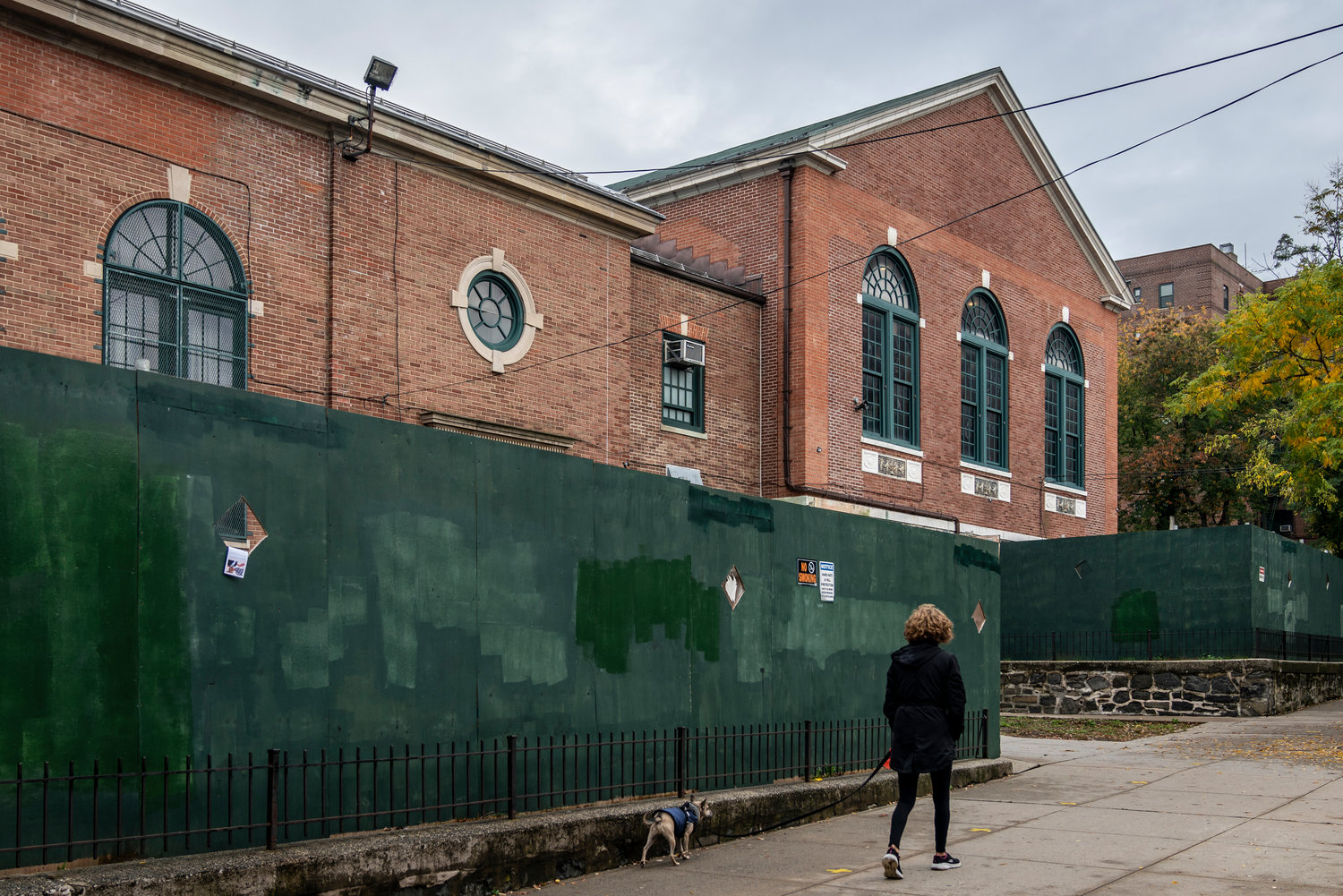 Parents at P.S. 81 Robert J. Christen — and public schools across the city — need to choose between hybrid and remote classes for their children by Nov. 15. They were originally supposed to have multiple opportunities to ‘opt-in’ to hybrid classes throughout the year, but the city announced last week this window is now their only opportunity to do so.
HIRAM ALEJANDRO DURÁN
Previous Next
By ROSE BRENNAN

Even with concerns SARS-CoV-2 is still present in public schools, parents still had a golden parachute at their disposal: They could opt out of hybrid learning and choose fully remote classes at any time throughout the academic year.

And many did so, thinking they’d have a few opportunities to opt back in when they felt it was safe.

The city was originally supposed to provide two “opt-in” windows throughout the year. But as it’s been prone to do since the return to school began, policy changes.

The end of schools’ first quarter approaches, as does an opt-in window for hybrid learning. But last week, public school parents learned this opt-in window would now be their only opportunity to have their children physically return for in-person classes this year.

The announcement came the same day the city released its in-school attendance records. While about 48 percent of its students were registered for hybrid learning toward the beginning of the academic year, only 280,000 — or 25 percent of the city’s 1.1 million public school students — are actually attending in-person classes.

“Right now, it’s time for people to make a decision,” de Blasio said Friday. “The schools are safe. It has been proven over and over again. Parents need to decide. And with one crucial reminder: If you decide to go all remote, that’s where you’re going to be until something changes on the health front.”

The hybrid learning opt-in window began Monday and continues until Nov. 15. The sole opt-in window might serve as a call to action for hesitant parents who must now confront the reality of their children learning remotely for an entire academic year.

But some parents are still reeling from last week’s sudden announcement, at a loss for what they will do. They’ve heard in-person classes are better for both academic and social-emotional learning. But is sending a child to school before there’s a vaccine worth the risk?

Jonathan Cane doesn’t think so. His son is a fourth-grader at P.S. 81 Robert J. Christen, and has been fully remote since Day One. And that’s how he’ll stay for the rest of the year, barring any major public health breakthrough like a vaccine.

Like many parents, Cane was thrown off-guard by the education department’s announcement. And the gravity of the decision he had to make wasn’t lost on him or on his son.

“It made me realize that if I’m not sending him back now — which I’m not — this is it,” Cane said. “The next time that my kid’s going to be in a classroom is September 2021.”

While Cane has the ability to stay home with his son, it’s not without its challenges. But he’s stuck between a rock and a hard place when it comes to choosing hybrid learning or remote learning, especially where his son’s social-emotional learning is concerned.

“He’s very clear about missing his friends and very clear about finding it challenging to do everything online,” Cane said. “On the other hand, when he was reminded that if he were in class, he would have to be sitting at his desk the whole day and distant from his classmates, unprompted, he said, ‘No, Dad, I couldn’t do that.’”

But the city might already be backtracking on its decision. Although nothing is certain yet, schools chancellor Richard Carranza hinted Nov. 15 might not be the final opt-in window after all.

“Change is the only thing we can count on,” Carranza said last week. “If it’s possible — and if it makes sense — we can absolutely consider another time period when students and families can opt back in.”

But to many parents, “can consider” and “will consider” are two very different courses of action. And the lack of certainty might cause some of them to jump the gun and opt for in-person learning — because the decision not to could affect not only their child’s development, but possibly their own ability to return to the office.

Rachel Varga certainly isn’t jumping the gun. Two of her children are fully remote in her North Riverdale home, and her decision of whether to shift to hybrid learning is one that might come down to the wire.

To Varga, the decision between hybrid and remote isn’t just a decision that will impact her children. It might impact their childhood memories — and it will definitely impact their entire family in the upcoming holiday season.

“We have to see if we want to risk our high-risk grandparents, knowing that if me and my husband put our children in school, that’s it,” Varga said. “We’re not doing Thanksgiving. We’re not doing Christmas. We’re not having any New Years’ celebrations. Do we take that childhood comfort and normalcy away, just so they can get some version of schooling?”