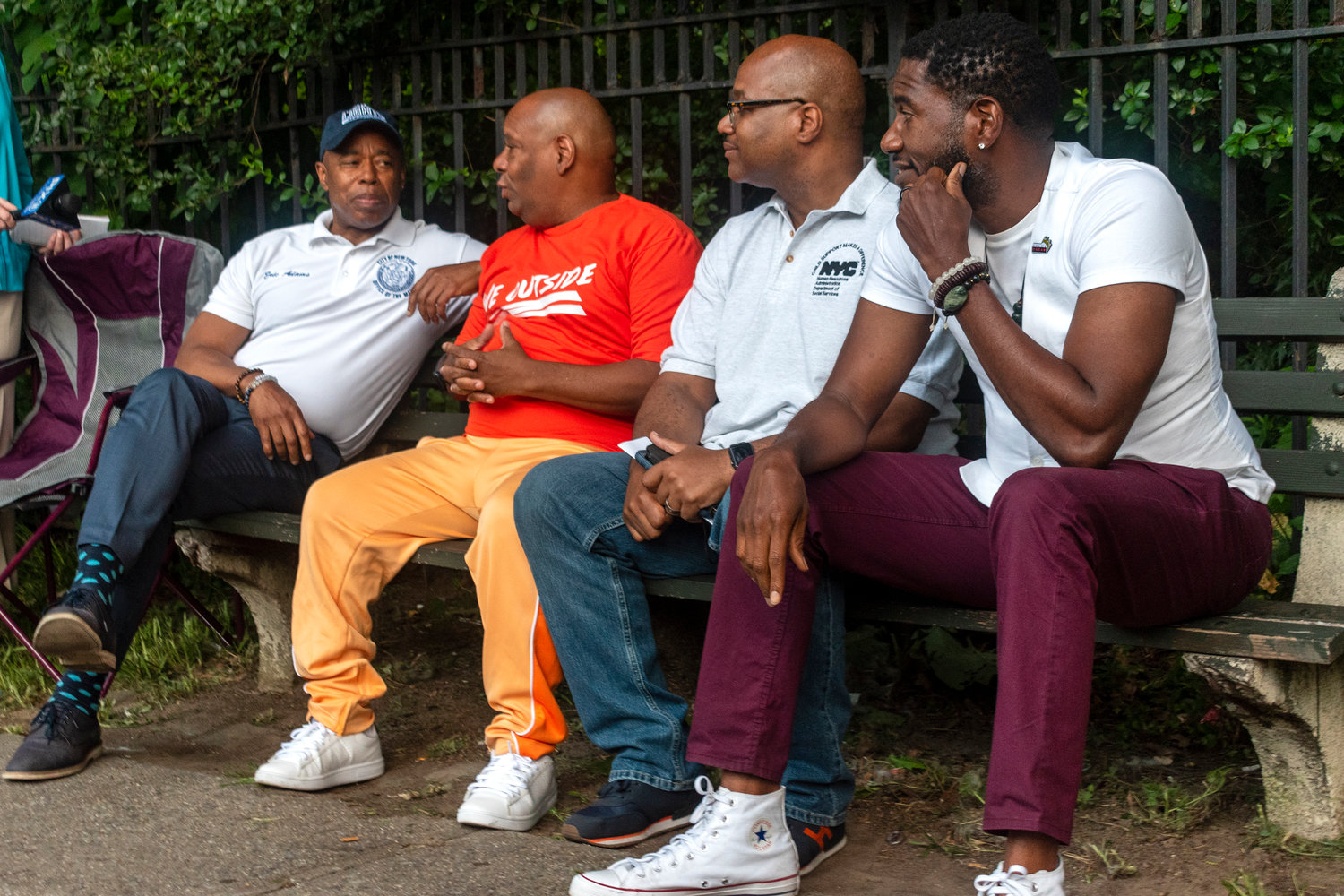 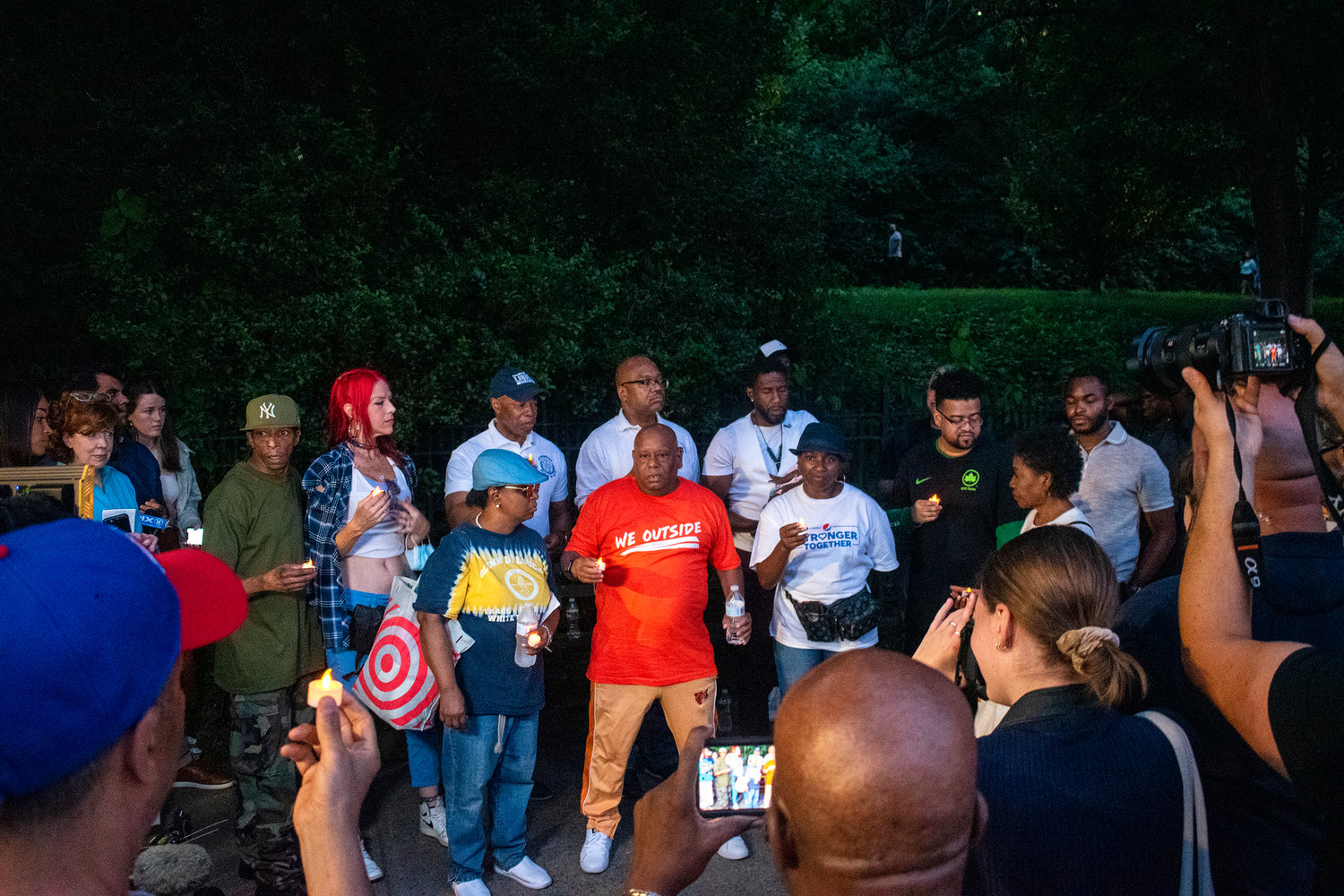 Faith leaders and electeds huddled together with others impacted by homelessness to pray for safety during the night ahead. A dozen people — nearly all currently without a home — settled to spend the night at Morningside Park last weekend.
ABIGAIL NEHRING

*The lack of evictions from April 2020-June 2021 is indicative of the state-enforced moratorium during the pandemic.
Abigail Nehring / Graphic
Previous Next

This is about everyone that spends a night in the streets.”
SHAMS DaBARON, ‘Da Homeless Hero’
Fed funding for asylum seekers

“This is a conservative estimate based on comprehensive interviews of people entering the city shelter system,” Adams said, in a statement. “An influx of approximately 4,000 individuals requires a significant number of new shelter sites to ensure appropriate capacity.”

Jenkins signed a July 29 emergency procurement declaration to authorize contracts for additional housing facilities and a referral center. He wrote that new asylum seekers are “the primary driver of the approximately 10 percent increase in the (homeless services department) census.”

Other drivers, according to housing analysts, include higher rents, lack of affordable housing, economic hardship and evictions — which have accelerated every month this year in the wake of the coronavirus pandemic.

Adams first raised the issue of asylum seekers several weeks ago after admitting the city failed to provide shelter to several families at the PATH intake center on East 151st Street in the Bronx. They slept on the floor while waiting past 4 a.m., to receive a shelter placement — a violation of the right to shelter in New York.

Adams said the city failed to meet the letter of the law, but has operated in its spirit. “I mean, this city is so humane.”

Mayor Eric Adams made an impromptu visit to Morningside Drive just outside Harlem Saturday, sharing a park bench with Shams DaBaron, a man who reads Rumi and Homer, and has slept on many park benches since first finding refuge in the streets as a child.

DaBaron recently became something of a hero in New York City — “Da Homeless Hero,” in fact, as he is known on social media and in the editorial pages of the New York Daily News.

When the coronavirus struck the city’s vast congregate shelter system two years ago, DaBaron spoke eloquently about the plight he and several hundred other men faced after the city funneled them into the Lucerne Hotel on the Upper West Side. There, neighbors greeted them with vitriol, campaigning to expel them from their neighborhood.

“We are not cattle. We’re not slaves,” DaBaron said a year ago. “We are human beings.”

He was a staunch critic of homeless services under former mayor Bill de Blasio, but seems to have struck up a delicate alliance with Adams. The new mayor has committed to building 1,400 safe haven and stabilization beds, and has given tacit support for converting offices and hotels into affordable housing.

But the shelter census is climbing again on Adams’ watch, and housing analysts expect the trend will eventually reverse the historic drop that occurred during the pandemic.

For nearly two years, evictions came to a near standstill, until litigation resumed last January. Since then, the citywide eviction rate has increased every month.

So far, city marshals have carried out 1,675 evictions this year — still a much slower pace than before the pandemic.

Last week, city public advocate Jumaane Williams presented a meticulous account of the failures of New York City’s shelter system and a prognosis for repair — a rebuttal, in many ways, to the mayor’s own proposals to shrink the city’s homeless population. The repeated message from the Committee to End Homelessness by 2026 — which authored the report — is that shelters are an expensive and often degrading way of providing affordable housing.

“The evidence is clear: housing ends homelessness,” the authors wrote.

“The more I looked at the shelter system and homeless services, I thought to myself, ‘Something is not clicking here,’” Glover said. “We’re spending almost three times as much money to house people in shelter as we are to keep them in their homes. There has to be a way that we can fix this. There has to be a way to create policy so that, first of all, people don’t become homeless. And second of all, when they do become homeless, they’re not stuck in the system for the length of time that they are.”

Once people enter the shelter system, the committee says their stay is well over two years for families with children.

“A really important aspect of this report was that it not only made the connection between housing and homelessness, but it laid out a pretty clear plan for getting people housed and reducing the time that folks languish in the shelter system,” said Sara Newman, an organizer with the Open Hearts Initiative, and a member of the homelessness committee. “That’s really important, and wasn’t something I saw in the mayor’s plan.”

DaBaron is also one of the members of the committee, but also contributed comments to the mayor’s housing blueprint. His outspokenness has led to a complicated web of political allegiances. He was courted by mayoral hopefuls in last year’s election, and stood alongside Gov. Kathy Hochul in June as she signed legislation allowing hotels to be converted into affordable housing.

DaBaron wanted to go big with the event at Morningside Park, and so he planned a vigil at the same time for the estimated 13,000 people who die while homeless in the United States every year. Afterward, he spent the night in the open air outside the park, and called on others to join him.

Adams helped him obtain expedited permits for the sleep-out, DaBaron said, which otherwise bore some resemblance to a street encampment. But participants brought only camping chairs and their personal belongings.

Some 50 people signed up, DaBaron said, and a dozen stayed for the duration. They ate pizza supplied by City Hall, and some may have caught the meteor shower that regaled the southern skies in the predawn hours of July 31.

Adams was also joined by social services commissioner Gary Jenkins, who heads the city’s $3.4 billion shelter system, as well as Williams, who fussed over his 6-month-old daughter as DaBaron held court.

Williams has taken Adams to task on the removal of unhoused people from the subways and city streets, testifying before city council that the practice “continues the conflation of fixing the homelessness crisis with not seeing homeless people in specific areas.”

The mayor sat in quiet repose Saturday as DaBaron turned to each of the three men cozied up beside him, calling for unity. The officials indulged a scrum of reporters that hovered close and grew in number, although the mayor took no questions.

“I came here for one reason,” Adams said, “to support Shams.”

From his perch beside the mayor, DeBaron led a freestyle discussion of homelessness with a small audience as the sun sank below the horizon.

“What’s required is for us — all of us — to work together,” DaBaron said. “We are all stakeholders. I talk to the rich people. I talk to the poor people. If anybody knows anything about me, you know I’m embedded in the streets.”

Members of the crowd, at times, threatened to break the delicate peace.

“Nobody’s coming here for political points,” DaBaron said. “They just want to be in solidarity. This is about everybody that spends a night in the streets. I am motivated because of the people that have died in these streets.”

Marc Greenberg, executive director of the Interfaith Assembly on Homelessness & Housing, said the vigil was important to keep the spotlight on those who seem to escape it the most.

“Some of us are out here tonight with no place to sleep but the streets or the shelters or the trains,” Greenberg said. “We feel their pain. We suffer with them. We also have hope because tonight we’re with the leaders of this city, and we believe they care.”

Abigail Nehring is a corps member with Report For America, a national service program that places journalists into local newsrooms.