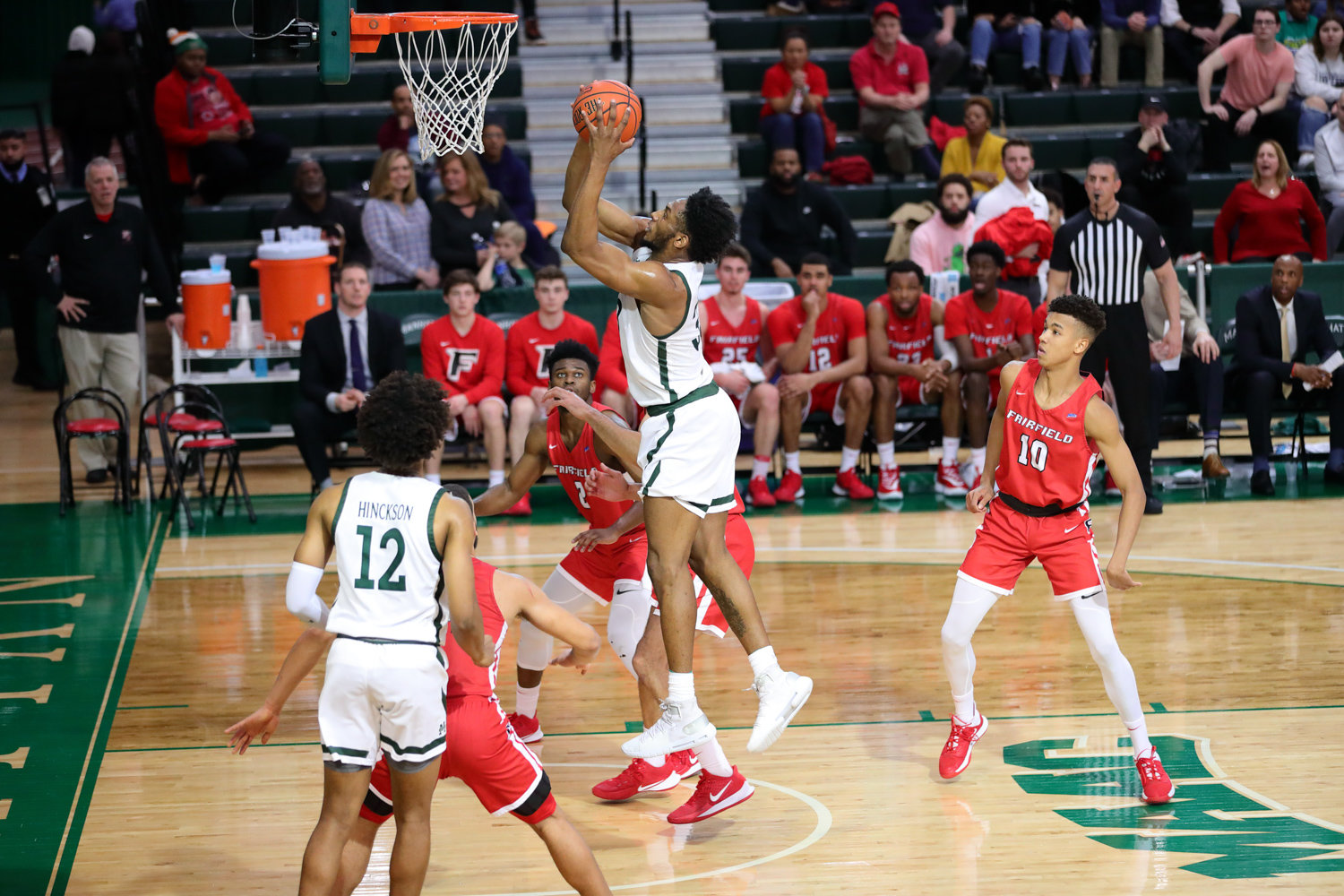 Manhattan’s Pauly Paulicap scored 11 points and pulled down nine rebounds, but it wasn’t enough to prevent the Jaspers from suffering a 66-50 loss to Fairfield last Friday night.
Courtesy of Manhattan College 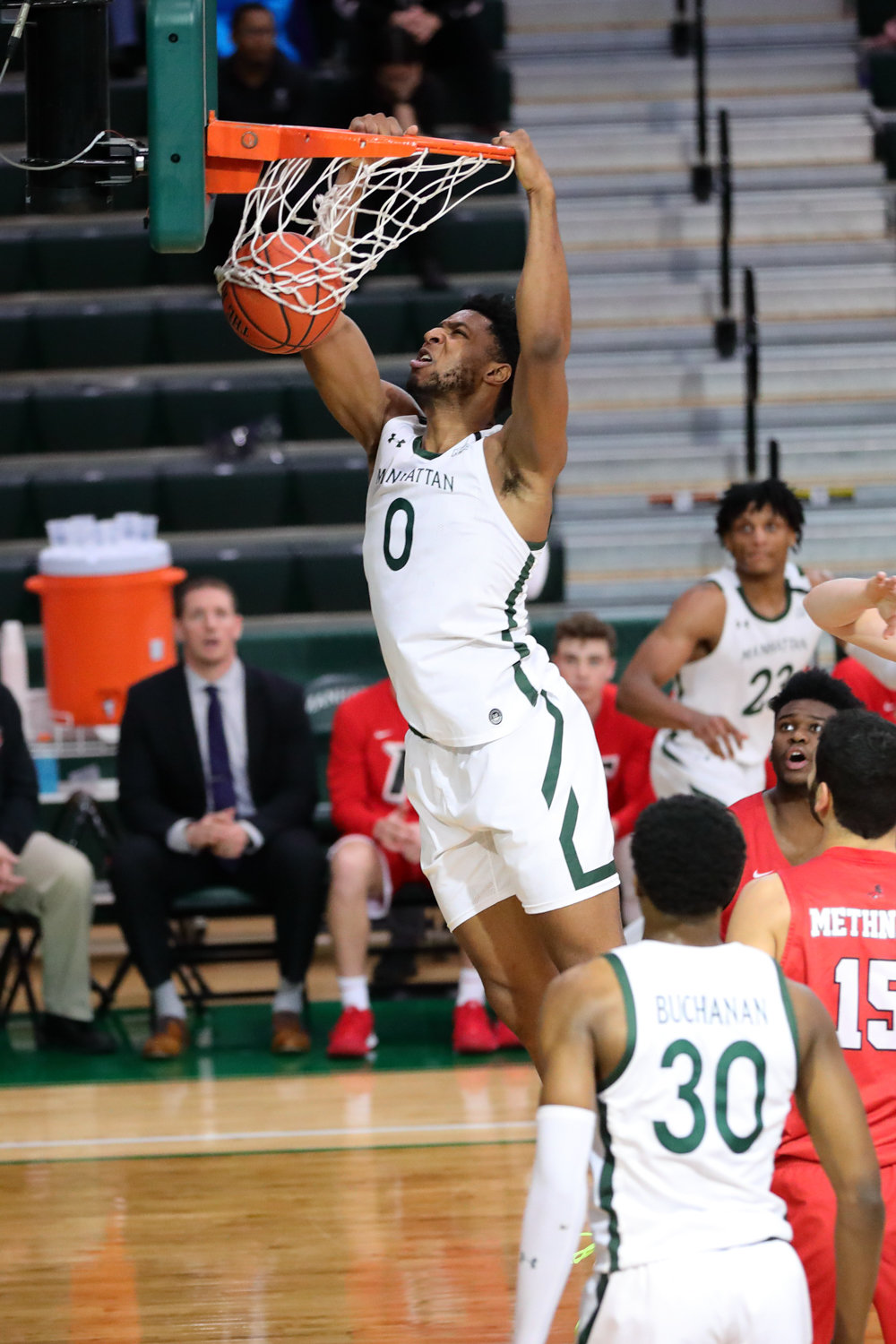 The plan last Friday night for Manhattan was rather simple: Send the Jaspers’ senior class out in style with a victory over Fairfield on Senior Night. That win would, in turn, put the brakes to a late-season skid that had seen Manhattan drop six of its previous seven games.

It also would have the Jaspers heading to the Metro Atlantic Athletic Conference tournament in Atlantic City with some good vibes and renewed confidence.

But those plans quickly imploded as Manhattan’s offense went into a deep freeze in the first half while the Stags shot the lights out, building a 17-point lead and goingon to post a convincing 66-50 victory over the Jaspers at Draddy Gym.

The loss dropped Manhattan’s record to 12-17 overall, 8-12 in the MAAC. Still, the Jaspers were handed the No. 9 seed in the MAAC tournament while Fairfield earned the eighth seed after finishing its season 12-19, and 8-12 in conference play.

Points were hard to come by for the Jaspers in the first half as they connected on just 5-of-24 from the field — a little under 21 percent — and were only 2-of-10 on three-point attempts. Couple those anemic stats with a Fairfield team that shot a blistering 62 percent in the opening half, and it was easy to see why the Stags held a 34-17 lead at intermission.

“Everything they put up seemed to go in,” Masiello said. “I think there were eight situations with three seconds or less (left on the shot clock) where we either fouled them or they hit crazy stuff. It wasn’t meant to be.”

Masiello wasn’t kidding as two such crazy shots came courtesy of Fairfield’s Jesus Cruz. In the first half, Cruz dove for a loose ball — and with the shot clock close to expiring, he launched a throw from just past the foul line while sprawled on the floor. It hit nothing but net.

For his encore performance in the second half, Cruz was again faced with a dwindling shot clock, and despite being surrounded by several Manhattan defenders, he flipped up a shot through traffic that again found the net.

It was just that kind of night for the Jaspers.

Masiello’s spirited halftime speech seemed to ignite Manhattan in the second half, at least for a while. So what was the message?

“Keep fighting,” Masiello said. “I believe in destiny and I believe in faith. But I also believe in a change in destiny and a change in faith if it’s not going the way I want. You can’t just sit there and keep getting punched. You’ve got to go after guys and get more aggressive. Change up things you’re doing. You can’t just allow what’s happening. I thought we did that at times. I thought we rallied when we did that, but not enough.”

The Jaspers did, indeed, rally as they shaved a Fairfield lead that reached 21 points (40-19) and trimmed it to 50-44 with 7:11 to play after a layup by senior Tyler Reynolds. But the Stags closed out the game on a 16-6 run to seal the deal.

The Jaspers had little time to lick their wounds, however, as they needed to turn their attention to the MAAC tournament, looking to capture their first title since winning back-to-back championships in 2014 and 2015.

The tournament could prove to be a whole new beginning for the Jaspers.

Ironically, the Jaspers were scheduled to face Fairfield again in a first-round MAAC tourney game that was set for March 10 at 5 p.m. Manhattan was swept by the Stags this season, with Fairfield also winning the first match 68-60 on Jan. 10.

Maybe the third time would be the charm for Manhattan. Magical things tend to happen in March, and Masiello remained confident in his Jaspers’ ability to make things interesting in Atlantic City.

“We have a tough matchup with a team that swept us, and we’ve got to be ready,” Masiello said. “We’re going to make a run no matter what.”