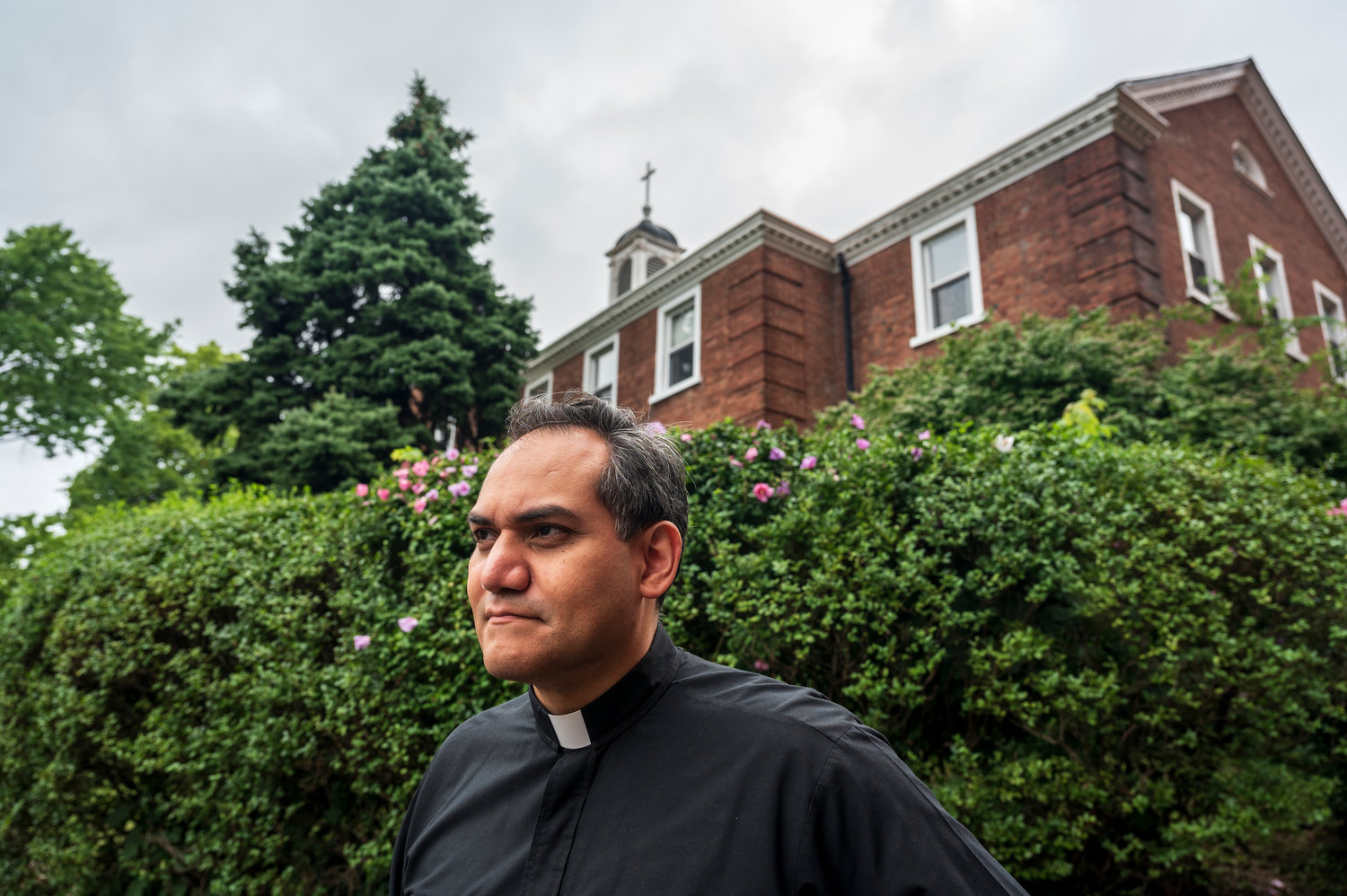 Father Joseph Franco takes over as lead pastor of Our Lady of Angels Church in Kingsbridge Heights, bringing with him not only a significant amount of experience in a similar role at nearby Sacred Heart Church in Highbridge, but also some deep Bronx roots — including having Manhattan College as his alma mater.
HIRAM ALEJANDRO DURÃN
By MICHAEL HINMAN

When it comes to relocations, Father Joseph Franco considers himself fairly lucky his new spiritual home is just a 15-minute drive from his old one. Yet, as Franco settles in as the new pastor of Our Lady of Angels Church on Sedgwick Avenue, there are times where those three miles could feel more like 300.

It’s not that Father Franco isn’t excited about introducing himself to a whole new congregation in Kingsbridge Heights — he is. It’s that it is never easy to just flip a switch after spending 17 years with a much different Catholic family, like the one he had at Highbridge’s Sacred Heart Church.

“When I got to Sacred Heart in 2004, I remember those eighth-graders that were just graduating from the school, and about 10 years later, a few of them were bringing back kids to be baptized,” Franco said. “You just see the generations kind of move through. Sure, 17 years doesn’t sound like a lot, but seeing all of that is just amazing. And I don’t have that point of reference here.”

Not yet, at least. Thanks to his work at Sacred Heart, Father Franco has a reputation of building vibrant congregations. And in a new parish where many have been chased away in the wake of the coronavirus pandemic, Franco is ready to re-build once again.

“My No. 1 mission? We need to recover from the pandemic,” the priest said. “I had some parishioners come back for the first time on a recent Sunday, in the middle of a storm, and looked around and were like ‘wow.’ They remember when Mass was standing room-only.”

The coronavirus has a lot to do with that, Franco says, as well as the fact that it’s summertime — which prompts many Catholics to think more about enjoying the sunshine than maybe showing up to worship God. But that doesn’t mean they won’t come back in the fall. In fact, Franco is betting on it.

“People are petrified,” he said. “That’s unfortunate, but it’s also understandable with the delta variant and everything else. People are petrified. I think we just have to help people recover from the pandemic. We just really need to bring people together.”

Although Franco bounced around the country — and even the world — a bit as an Army brat, he spent most of his life in New York City, primarily Queens. But Franco’s Bronx roots also run deep. He graduated from Manhattan College in 1997, and delivered his first Mass as an ordained priest at the former Visitation Church on Van Cortlandt Park South.

But Franco’s particular association goes back even further. When his parents were first married, they briefly lived at an apartment on Marble Hill Avenue. While he’s sure they told him that back in his Manhattan College days, it didn’t really hit home until he took over at Our Lady of Angels.

“My mom and I, we were having a real heart-to-heart,” Franco said. “I told her that I was taking this very hard. I don’t know why — it’s just that I was connected to the people (in Highbridge) for 17 years.”

But Franco’s mother wasn’t surprised. He spent most of his life moving around, and it wasn’t until landing at Sacred Heart that he found himself staying put for a long time. Now it’s just getting used to something new again. Which can be exciting in itself.

“She also told me that it’s funny, but it’s almost like I’ve come home,” Franco said. “Because that’s where she was pregnant with me.”

Father Franco isn’t the only new face parishioners will see around Our Lady of Angels. Father Steven Gonzalez — who was just ordained last May — steps in as the church’s assistant pastor.

Gonzalez was born and raised in the Bronx — coincidentally, in Highbridge. However, his family was part of St. Lucy’s Church near Pelham Gardens, which is where he offered his first Mass earlier this year.

Callings to the priesthood is different for everyone, and that was true for Father Gonzalez. He was already deep into his sophomore year at Fordham University when his own flip switched from never even considering becoming a priest, to deciding which seminary school he wanted to attend.

“I had a very strong conversion experience,” Gonzalez said. “I did a lot of research on the faith, and I felt like God was calling me to this life.”

No one simply wakes up one day and decides to be a priest, Gonzalez said. Especially for a millennial like him.

Although Franco’s official installation won’t happen until Oct. 2, he’s already been quite busy with Father Gonzalez introducing himself to his new Our Lady of Angels family. And the best way for them to meet their new pastor? Come to Mass, the priest said.

“I was just counseling young Father Gonzalez to not be surprised if people don’t come right up to you right away,” Franco said. “They just need to see you a couple of Sundays. To hear you. To experience you. And even in your preaching, don’t be afraid to share a few personal things.”

It simply reminds anyone in earshot that outside of their devotion to God so deep they took the cloth, these priests are no different than anyone else.