No trick-or-treating? No problem for Halloween party hosted by Cathy Sanacore 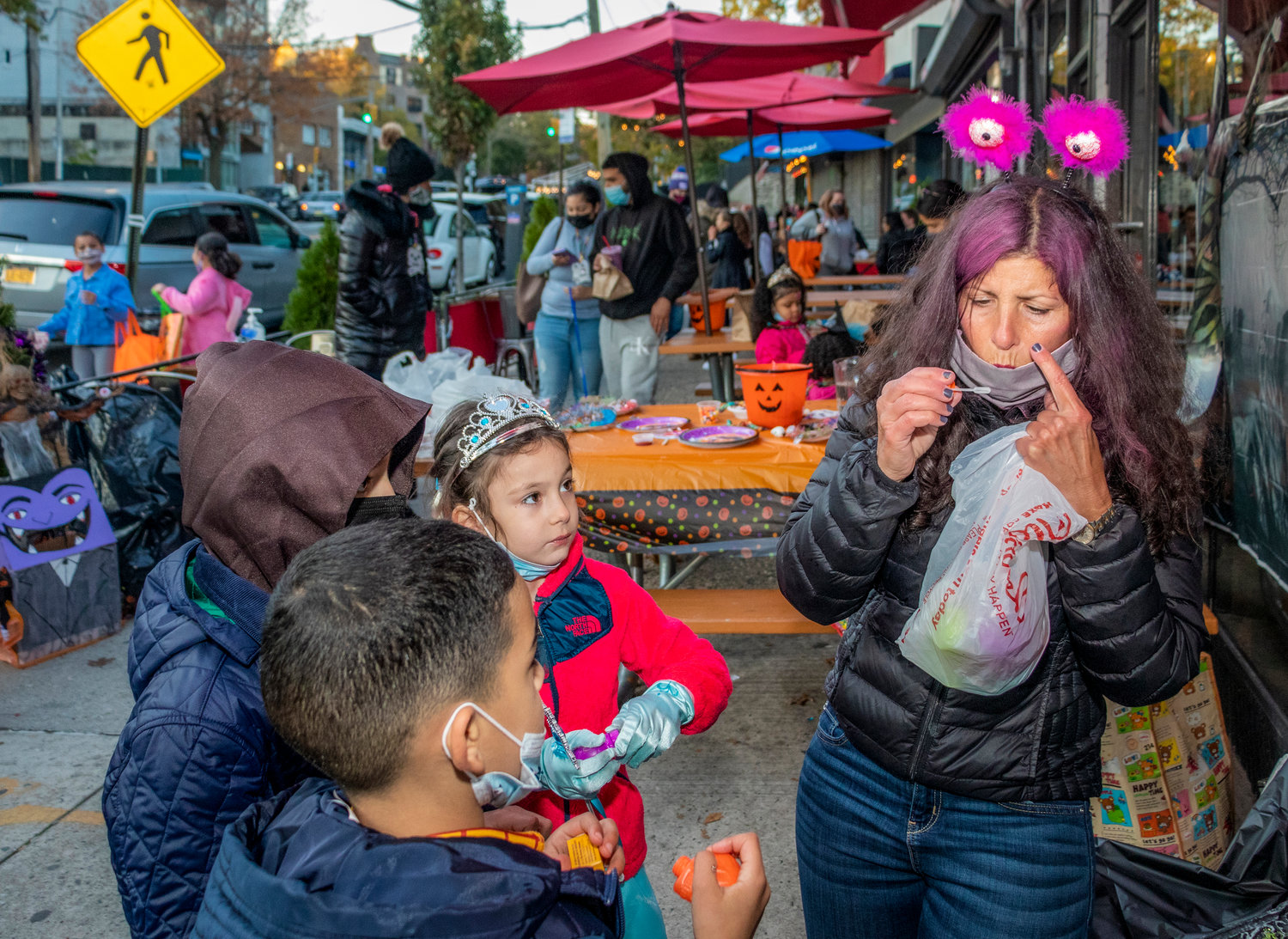 Cathy Sanacore teaches kids the trick to bubble-blowing at her socially distant Halloween party at Yo-Burger last weekend. Sanacore taught arts and crafts at Yo-Burger on Riverdale Avenue before the coronavirus pandemic, and used it as a site for a safe but fun Halloween party for neighborhood kids.
BRIAN ASARE 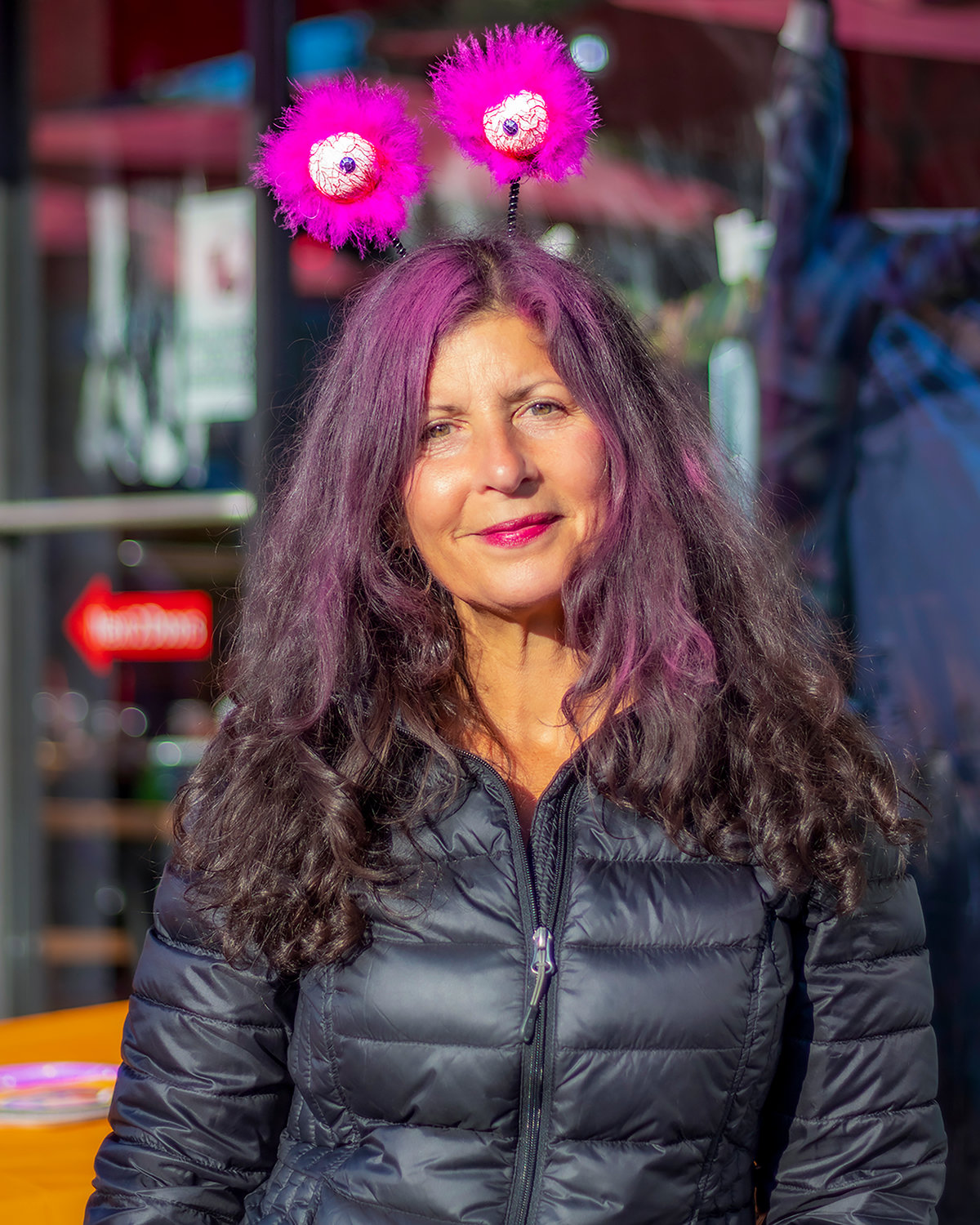 This could have been the year without a Halloween — but not if Cathy Sanacore had anything to say about it. Sanacore hosted a socially distant Halloween party at Yo-Burger on Riverdale Avenue, providing kids with fun, games, and of course, candy.
BRIAN ASARE 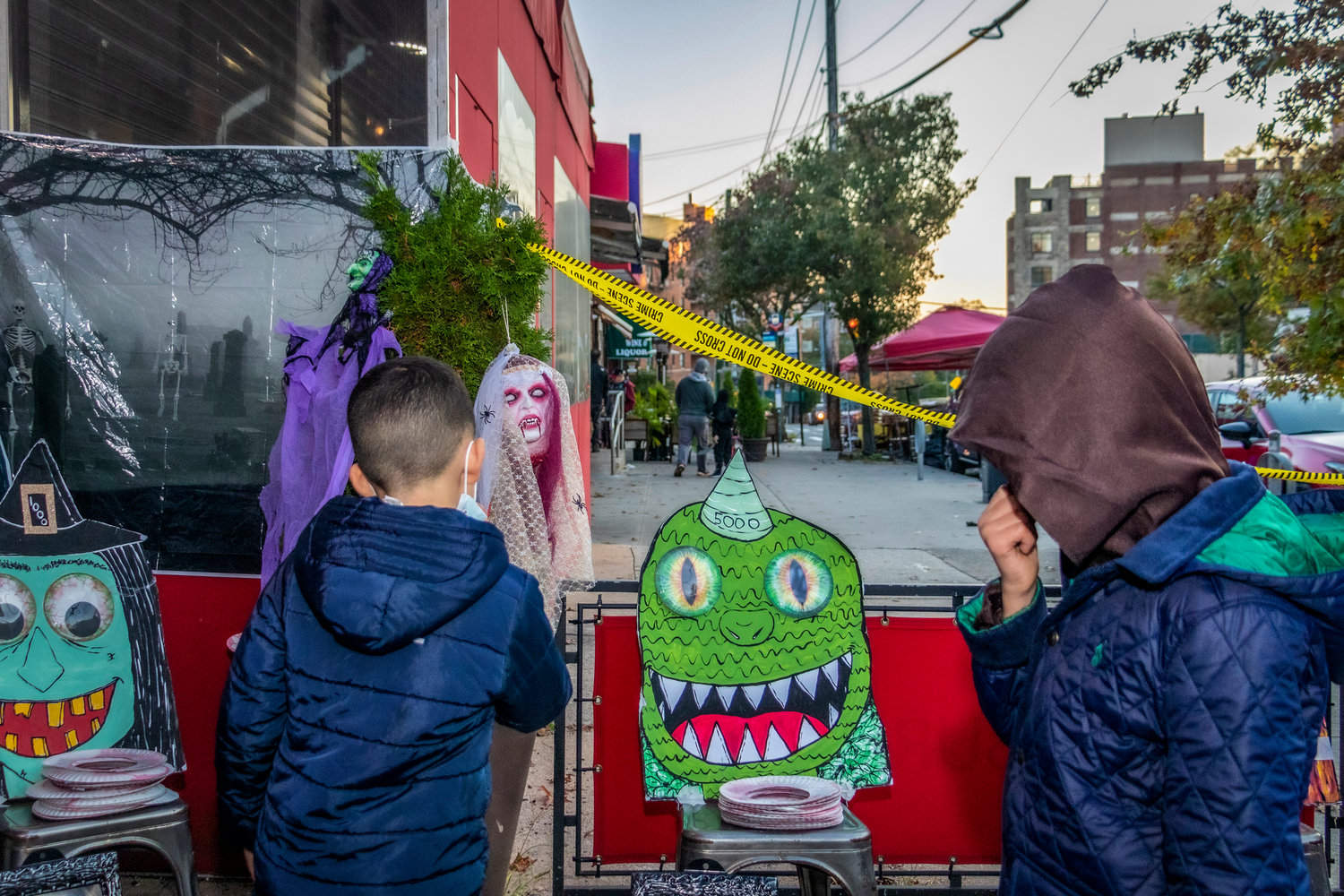 While many children didn’t get to go trick-or-treating this year, Cathy Sanacore wanted to make sure they still had an opportunity to celebrate Halloween — and, more importantly, still rake in some candy. Candy was the coveted prize of this game at Sanacore’s socially distant Halloween party at Yo-Burger on Riverdale Avenue last weekend.
BRIAN ASARE 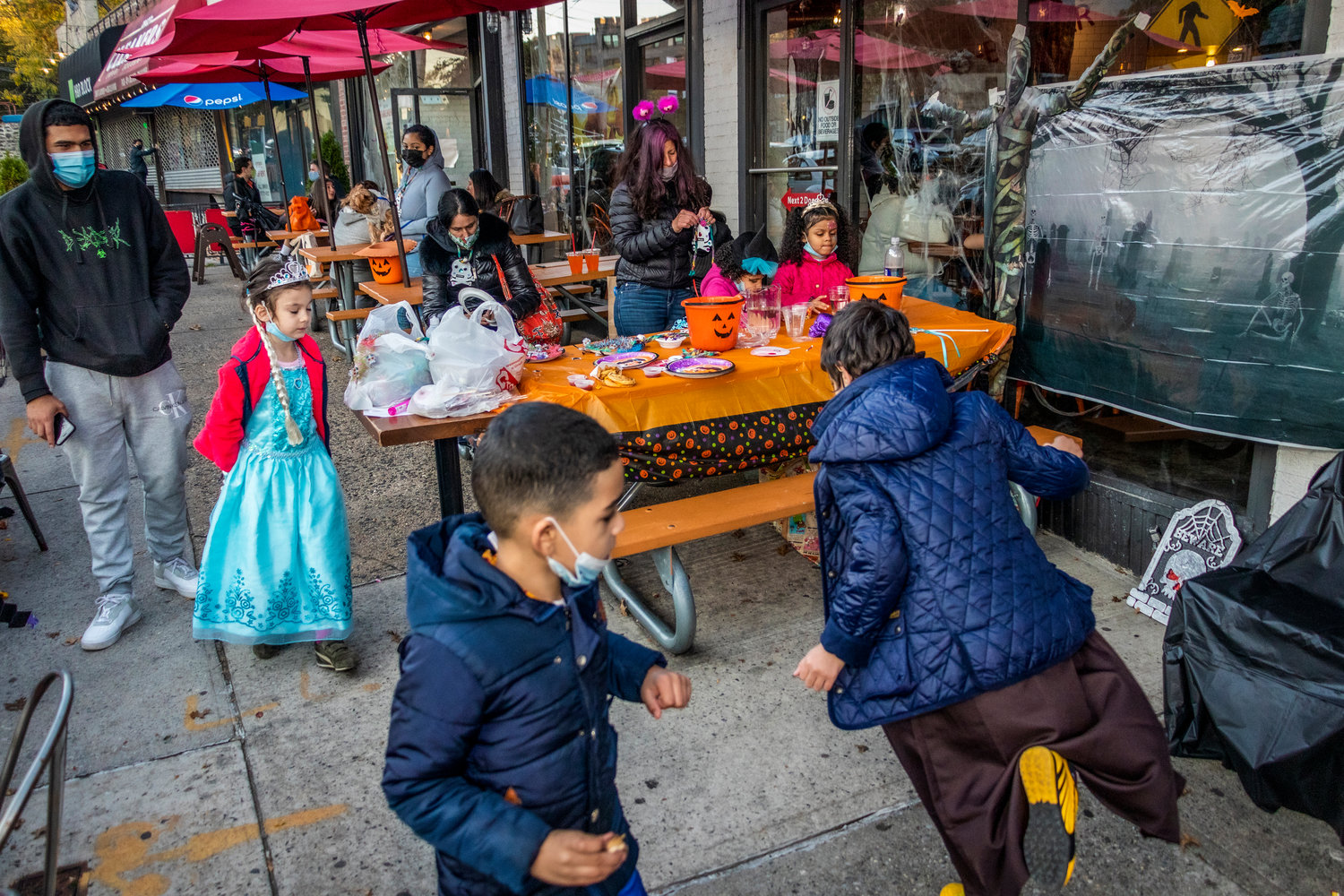 Social distancing might end a bid for trick-or-treating, but not for Halloween fun. Cathy Sanacore hosted a pandemic-safe Halloween party for neighborhood kids Oct. 31, showing them physical distancing and spooky fun didn’t need to be mutually exclusive.
BRIAN ASARE 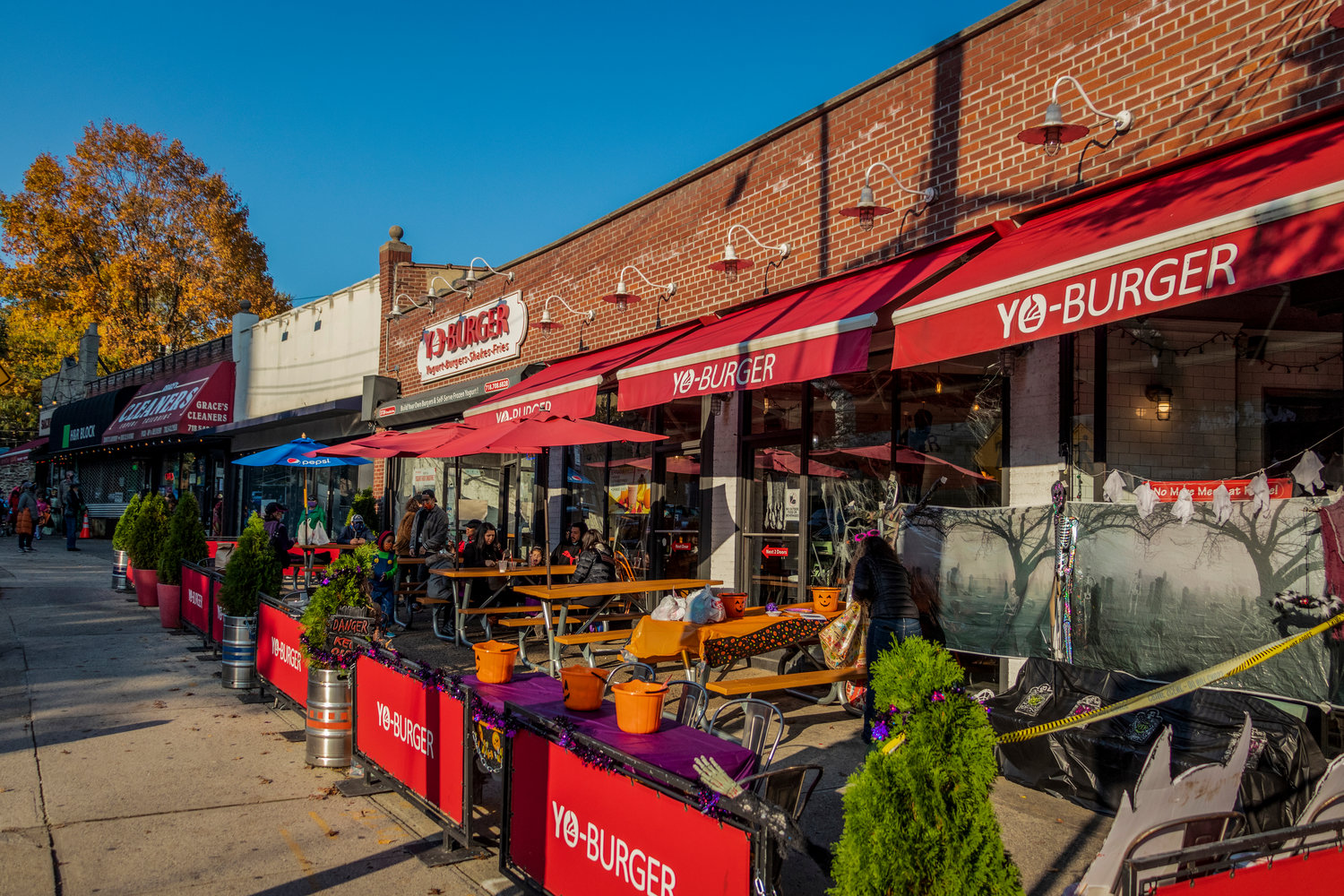 Halloween might have looked different this year, but thanks to Cathy Sanacore, the annual candy-filled holiday was saved. Sanacore hosted a pandemic-safe Halloween party last weekend at the Yo-Burger on Riverdale Avenue so neighborhood kids could still make fun Halloween memories even in the midst of the coronavirus pandemic.
BRIAN ASARE
Previous Next
By ROSE BRENNAN

There are few things young children look forward to more than Halloween night. They get to dress in their favorite costume, maybe stay up a little past their bedtime — and who could forget the reward of candy after hours of walking through the neighborhood?

But this year, the world faced its own scare — the coronavirus pandemic. That meant Halloween would look a bit different. While Mayor Bill de Blasio gave the OK for trick-or-treating, parents needed to take extra precautions, like wearing a much different kind of mask and maintaining social distancing.

There was no doubt: All Halloween festivities needed to be outside this year.

Even so, some parents weren’t quite ready to take that leap. But Cathy Sanacore was ready, and she wanted to ensure no child was excluded from Halloween festivities. The local artist took it upon herself to make this a Halloween the neighborhood’s kids wouldn’t soon forget.

She chose Yo-Burger on Riverdale Avenue to host her party — a familiar place for Sanacore, because this is where she held weekly craft classes for kids before the pandemic.

Sanacore often would throw seasonal parties for the children she taught. While that, too, may have become a victim of the coronavirus, Sanacore was dead set on making it happen anyway. At least for Halloween.

Why? Because kids, she said, have already lost enough this year. At this point, they deserved a night of fun and seeming normalcy.

Usually — like most party-throwers — Sanacore would have interested families RSVP for her holiday and birthday parties. But this year, she didn’t want to prevent any children from attending.

“The kids have been so good through this whole thing,” Sanacore said. “And I just don’t feel that they should not have a party, not be able to trick-or-treat, or anything like that.”

Just because Sanacore was throwing a party didn’t mean she was throwing caution to the wind, however. She wanted to make the party fun for kids, but also safe.

So all festivities took place outside of Yo-Burger. And while costumes were encouraged, everyone still had to wear masks snugly covering their faces and noses.

In addition, all of the games and activities Sanacore provided complied with social distancing guidelines set by the Centers for Disease Control and Prevention. For instance, attendees wouldn’t have to share any supplies for arts and crafts projects. Instead of coloring from community boxes of supplies, children could paint skulls with their own brushes, make a spooky Halloween necklace, and assemble Halloween wreaths.

“I don’t want to just say, ‘Oh, it doesn’t matter, we’re going to have fun, it’s not a big deal,’” Sanacore said. “I want them to still know that we can socially distance, but we can also have fun while we socially distance.”

Many have questioned whether young kids are disciplined enough to maintain social distance, and hopefully prevent further spread of the virus that causes COVID-19. Sanacore, however, can safely say she’s observed quite the opposite, especially when she hosted an outdoor birthday party earlier this year.

It was the children’s behavior there which inspired her to throw the Halloween party.

“The kids are actually great with the masks,” Sanacore said. “The kids are better than the grown-ups. That’s really why I decided to do it, because I saw how the kids are, and they’re really good with it.”

Of course, there was also candy, because even if parents nixed trick-or-treating, Sanacore believed kids still deserved to enjoy all of the fun that comes with Halloween — albeit with less risk. And to abate that risk, she pre-bagged candy, rather than having the kids rummage through a bowl like they usually do on Halloween night.

While Sanacore meticulously planned for nearly every coronavirus obstacle, there was one factor outside of her control: The temperature. It got very chilly as the sun started setting around 5 p.m.

Yet many parents expressed gratitude to Sanacore for hosting the party. There were even a few who experienced their first Halloween at the Yo-Burger gathering.

Hopefully, this year’s festivities will be an outlier to more traditional Halloween celebrations rather than a precedent-setter. And Sanacore thinks even in the midst of a pandemic, kids deserve something to look forward to — especially when Halloween night is such a fundamental childhood memory for most American children.

“Ringing the doorbell, finding the best houses that gave the best candy — it was this whole thing, and that was taken from them,” Sanacore said. “So you know how much candy I bought? I swear, I think I bought like 100 pounds.”