Some Dems not yet ready to embrace new player in town 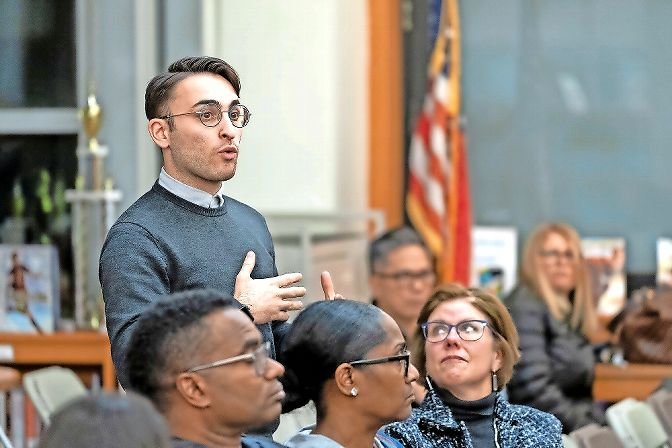 No stranger to Bronx politics, Christian Amato has worked with candidates like now-state Sen. Alessandra Biaggi and former congressional candidate Andom Ghebreghiorgis. While excited about seeing change come to the area, Amato worries smaller progressive candidates might be impacted by groups like Justice Democrats, who supported both Jamaal Bowman and Alexandria Ocasio-Cortez in their landmark congressional races.
File photo courtesy of Todd Cross 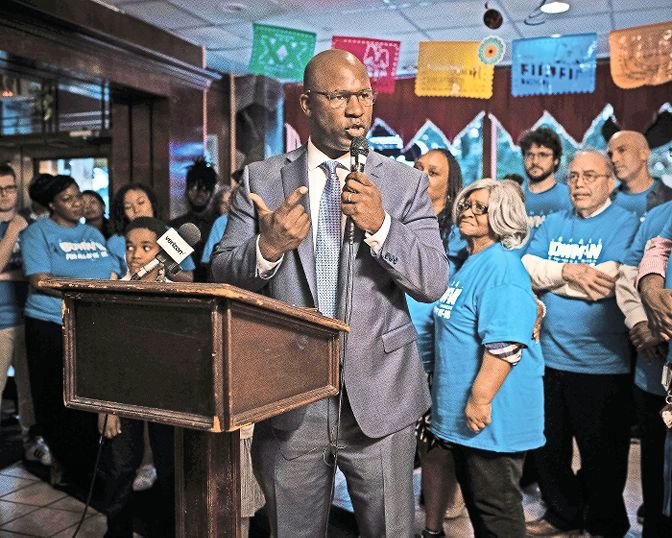 Jamaal Bowman’s campaign to succeed longtime incumbent U.S. Rep. Eliot Engel as the Democratic nominee gained national attention, in part thanks to one new political group: the Justice Democrats. The Tennessee-based organization seeks to support and elect progressive candidates in districts with who they say are currently led by elected officials who are ‘out of touch.’
Courtesy of Jamaal Bowman / File 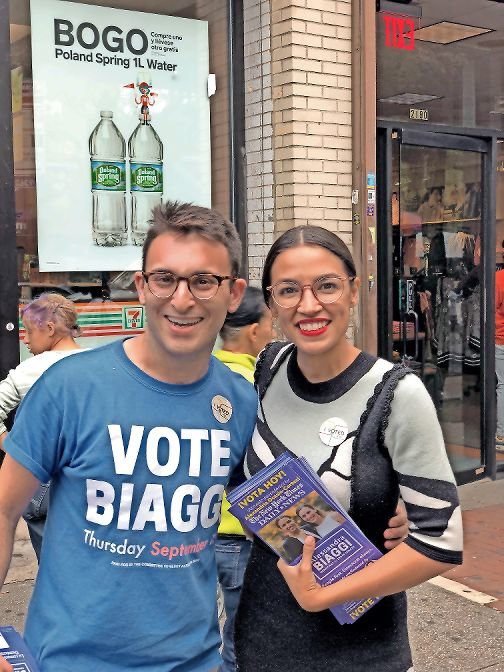 Christian Amato, a former staffer for state Sen. Alessandra Biaggi and campaign manager for the unsuccessful congressional race of Andom Ghebreghiorgis, has some concerns about the growing influence of the new political group Justice Democrats. That group is quickly gaining nationwide prominence, especially with major victors along the lines of both U.S. Rep. Alexandria Ocasio-Cortez in 2018 and Congressional Democratic nominee Jamaal Bowman this year.
Courtesy of Christian Amato / File 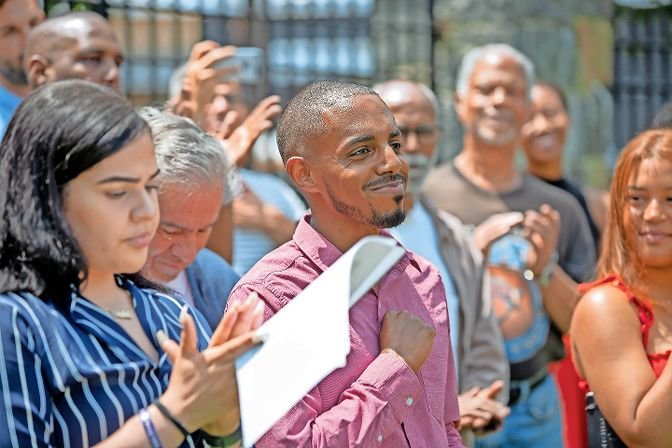 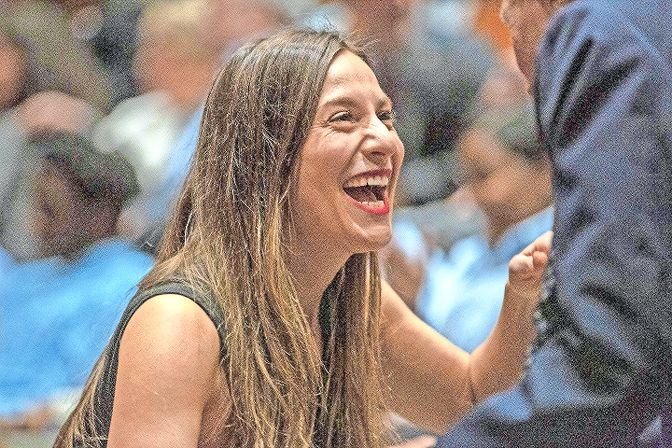 Alessandra Biaggi’s 2018 win over long-term incumbent Jeff Klein in the state senate may have represented part of the beginning of a progressive change in the Bronx. Biaggi’s former deputy chief of staff, Christian Amato, worries the influence of up-and-coming political groups like Justice Democrats — which has backed candidates like Alexandria Ocasio-Cortez and Jamaal Bowman — might impact other progressive Democratic candidates.
EIAN KANTOR / File
Previous Next
By KIRSTYN BRENDLEN

There have been some huge political shakeups in the Bronx over the last couple years, attracting widespread media coverage and nationwide support in a borough often overlooked.

Two years ago, Alexandria Ocasio-Cortez upset longtime congressman — and someone in-line to become the next Speaker — Joe Crowley. That same year, Alessandria Biaggi and other fresh Democrats rose up and eliminated most of what had been the state senate’s Independent Democratic Conference, which had helped keep Republicans in power.

This summer, it was Jamaal Bowman becoming the Democratic nominee in New York’s 16th Congressional District, ousting 30-year incumbent Eliot Engel. In the final weeks of his campaign, as Bowman gained traction and attention capitalizing on a number of Engel gaffes, observers started to wonder: Was he the next AOC?

Of course, Bowman is his own person, running his own campaign in a district that has distinct differences from the one Ocasio-Cortez represents. There is one major similarity, however: Both Ocasio-Cortez and Bowman were handpicked and backed by Justice Democrats, a Tennessee-based political organization dedicated to electing progressive Democrats in districts currently run by leaders they describe as “out of touch.”

The organization looks hard for potential candidates at the beginning of each election cycle. This year’s challengers hailed from nine states, with some still running. However, while some of the group’s successes like Bowman and Ocasio-Cortez get a lot of attention, the group does lose races as well.

When the Justice Democrats approached him about running last year, Bowman already had been contemplating a challenge to Engel, pitching the idea to friends and family.

“I spoke to some of the grassroots organizations that I had worked with while I had been a school principal, like the Coalition for Education Justice and the Alliance for Quality Education,” Bowman said. “And the executive director at the time of AQE was someone by the name of Billy Easton who nominated me to the Justice Democrats after I spoke to him about a potential run.”

From that point, Bowman said, the political group provided support “in every area you can think of.”

Justice Democrats require candidates to pledge not to take money from corporate PACs or lobbyists, and must agree generally with the group’s political platform, typically considered a little more left than more traditional Democrats.

Yet, even with their success, they haven’t won over all Democrats quite yet. Some, like Bronx political operative Christian Amato, has some reservations about the organization.

“It’s a little bit polarizing,” said Amato, who ran Andom Ghebreghiorgis in the Democratic primary Bowman ultimately won. “What ends up happening is institutional support, or institutional organizations, you know, kind of are throwing their support behind Justice Democrats without doing the proper vetting on their own, almost as though Justice Democrats allows them to move around those other barriers to other candidates. I think that can be a little bit unhealthy for the democratic process.”

During the campaign, both Bowman and Ghebreghiorgis managed to find their own pockets of support throughout the district.

“One thing was really clear throughout (the) campaign, and that was that we had the support of the grassroots,” Amato said. “We had people on the ground who were diehard Andom supporters. And so that pressure, oddly enough, didn’t really exist.”

Ghebreghiorgis’ campaign wasn’t the first time Amato had worked to unseat a long-term incumbent. He also was part of Alessandra Biaggi’s campaign against Jeff Klein in 2018, later serving as her deputy chief of staff.

Amato was impressed by the Engel campaign’s ability to mobilize voters on the ground, encouraging them to volunteer, carry petitions and phone bank in the months leading up to the election. Klein, he said, hadn’t had such deep-rooted support.

Having a plan is essential — something Bowman admits he didn’t have much of before Justice Democrats backed him.

“My goal, the mission in my head, was, ‘OK, I’m going to announce a run, I’m going to do whatever paperwork needs to be done, and I’m just going to knock on more doors in the district than Congressman Engel,’” Bowman said. “’And if I do that, we’ll win.’”

In the end, it took more than simply knocking on doors. A victory also required finding thousands of volunteers, making even more phone calls, and clinching dozens of high-profile endorsements.

Yet, the Justice Democrats weren’t the only group offering support, Bowman said. The Justice Dems helped with funding and strategy at the beginning, but he brought in his campaign manager, and communications and finance teams separately.

Bowman disagrees with criticism from other candidates and political observers who are critical of Justice Democrats. At the end of the day, he said, it’s his job to represent the constituents in the district as well as he can, and prioritizes learning from and listening to all kinds of voters.

“That’s why we were able to triple voter turnout, and triple turnout among young people and people of color,” Bowman said. “Justice Democrats was a part of that, but they weren’t the reason people came out in droves to support us. It wasn’t, ‘Oh, he’s a Justice Democrats candidate, let’s go vote for him.’”

At the end of the day, Amato said, the northern part of the Bronx and Westchester have shown they’re ready for large-scale political change, and that often comes at the grassroots level.

“There is an appetite for a real level of change and progress in these communities, whether it’s in the Bronx or Westchester,” Amato said. “And there are activists and grassroots allies across the Bronx who are looking to the (city) council races and looking to the races in 2022 to really push forward a leftist plan to create a state that’s more aligned with the grassroots mentality that we’ve seen in these last two races.”