Some still frustrated by a rather confusing process 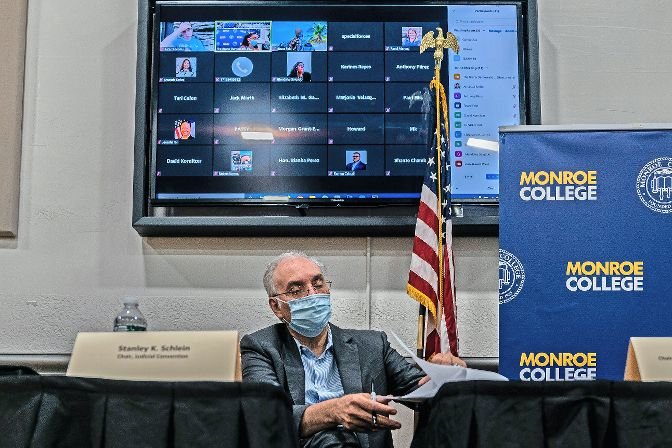 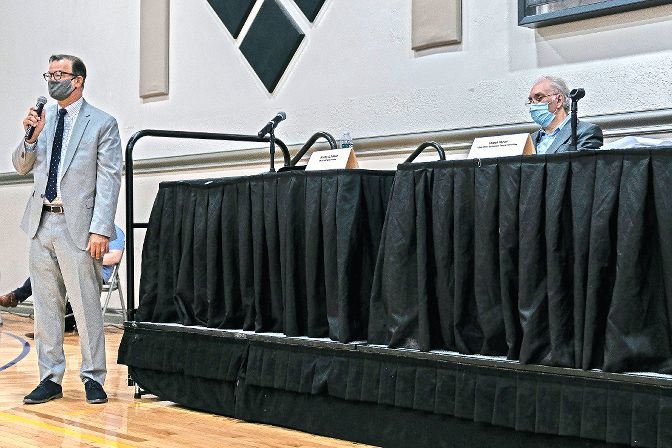 After two years of speculation, Councilman Andrew Cohen was finally nominated to the Bronx supreme court at the recent Bronx Democrats judicial convention. Cohen expects to remain at City Hall until the end of the year, at which point his exit will trigger a special election.
HIRAM ALEJANDRO DURAN 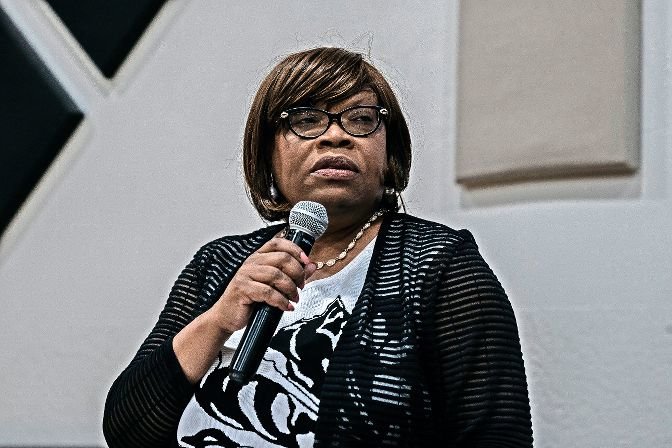 Civil court judge Kim Adair Wilson was one of three people nominated by the Bronx Democratic Party for the county supreme court. Wilson, a current civil court judge and former criminal court judge, will appear on the ballot in November, and is expected to take her new position in January.
HIRAM ALEJANDRO DURAN 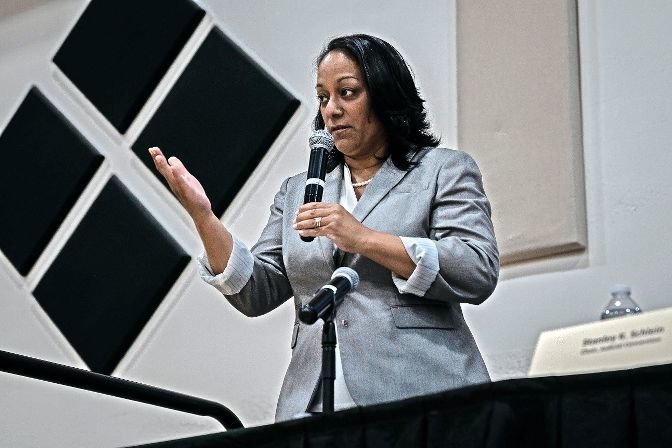 Bianka Perez accepts her nomination to the Bronx supreme court at the Bronx Democrats’ judicial convention. Perez is one of three nominees, alongside Councilman Andrew Cohen, who is expected to take the bench next year.
HIRAM ALEJANDRO DURAN 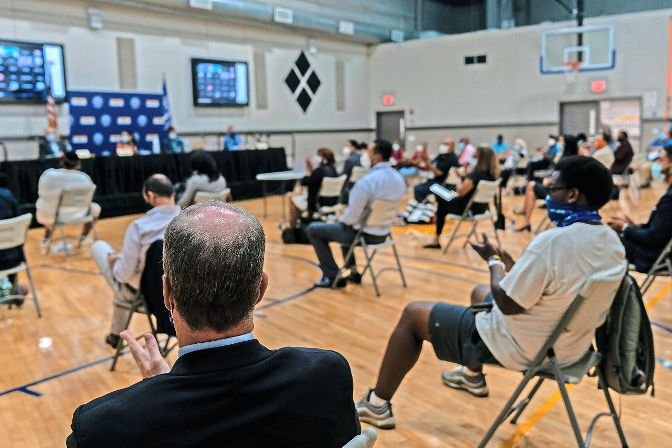 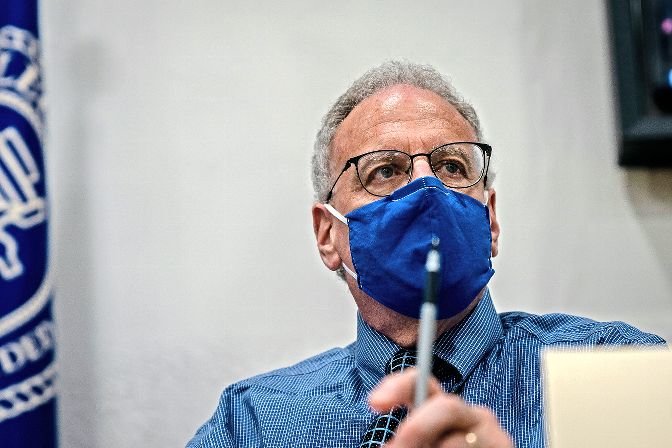 Assemblyman Jeffrey Dinowitz, longtime ally of Andrew Cohen and secretary of the Bronx Democratic Party, celebrated the councilman’s nomination to the county supreme court by the county party. Cohen, alongside Bianka Perez and Kim Adair Wilson, is expected to take the bench next year.
HIRAM ALEJANDRO DURAN
Previous Next
By KIRSTYN BRENDLEN

It was big news coming from the Bronx Democrats’ judicial convention that seemed a long time coming.

After two years of speculation and gossip, Councilman Andrew Cohen was finally nominated to the Bronx supreme court, and as a Democrat, is almost assured victory in November’s general election that could have him on the bench as early as January. If all goes according to plan, that means Cohen will leave his council seat at the end of the year, triggering a special non-partisan election for his seat in March.

Cohen wasn’t the only one nominated. Bianka Perez and Kim Adair Wilson, who both currently serve as civil court judges in the county, will also appear on the November ballot, but also are expected to win the other upcoming vacancies on the supreme court bench.

It’s almost common knowledge now that Cohen was selected to don a black robe. But many may still not know how it happened.

The supreme court judge selection process is infamously opaque, according to many observers. With jurisdiction over just about any criminal case involving an indictment, supreme court nominees go in front of voters only after they are vetted and chosen by the party. While other parties also can nominate judges, voters in the Bronx tend to only have just enough candidates to fill the open positions, not leaving a lot of choice at the grassroots level on who ends up on the bench come election day.

Making choices for the future

June’s Democratic primary saw two civil court candidates on the ballot in the second judicial district, which covers the western half of the Bronx from the Hudson River to the Bronx River Parkway. They were Wanda Negron and sitting judge Linda Poust-Lopez. Negron won by a slim margin, advancing to the November election.

Supreme court judges are selected differently, as there are no primaries for them. Political parties elect delegates to county judicial conventions, who in turn make what could ultimately be the final choices for November.

That means the closest voters can get to influencing the court is by voting on judicial delegates within their Assembly district. Yet, even that isn’t ironclad, according to the Brennan Center for Justice, as delegates often run unopposed and don’t even have a spot on the ballot.

Jack Marth, an alternate delegate in the 81st Assembly District, said he became interested in becoming part of the decision-making process while part of the Benjamin Franklin Reform Democratic Club, which many say is deeply intertwined with the Democrats organized at the county level in the Bronx.

“The Ben Franklin Club, historically, has been where delegates and alternates in the 81st Assembly District are determined,” Marth said. “The club has its slate, and they do the petitioning for their slate.”

Marth accepted a position as an alternate, he said, because the club wanted to avoid a contested election within its ranks.

All was going smoothly until Marth received his official letter notifying him about the convention. One thing was missing: Information about attending the convention virtually in the middle of the coronavirus pandemic.

“No remote participation option,” he wrote. “We have to risk our lives to witness this Soviet-style rubber stamping of Stanley Schlein-approved judges?”

Schlein, of course, is the high-powered attorney that many say has controlled the Bronx Democrats for years, even through the so-called “Rainbow Rebellion” of more than a decade ago when insurgent Democrats like longtime Assemblyman Jeffrey Dinowitz and future Assembly leader Carl Heastie aimed to topple then party boss Jose Rivera.

The rebellion was ultimately successful, primarily because Schlein — who had previously backed Rivera — switched sides, observers noted at the time.

Bronx Democrats immediately responded to Marth through an email from Dinowitz, who also is the secretary of the county party, explaining that a remote option was on the way. Marth and others eventually received online information to attend the convention virtually.

He still wasn’t quite satisfied, though.

“I don’t think it’s the best way for judges to be selected, because there isn’t transparency about the process,” Marth said. “It’s one of the last remnants of patronage within our machine-dominated Democratic system within the Bronx, and throughout New York City.”

Schlein, described by City & State as “the embodiment of the Bronx machine,” was selected as the chair of the judicial convention. It’s a bit of an odd position for Schlein, who in 2006 was barred from accepting guardianships and some other judicial positions by state court officials after what they say was his poor handling of the role that ultimately hurt senior citizens. Yet, he’s not restricted from serving as a judicial convention chair.

To get the process started, attorneys interested in ascending to the supreme court give their names to a screening committee comprised of different attorney bar associations. The committee selects qualified candidates, giving their names to their respective parties, who then, in turn, select their nominees.

Those nominees are made official at the judicial convention, though technically delegates can nominate anyone they want — party-approved or not. But it’s rare that such a nomination has been successful from the floor, if it’s ever been at all.

During an online videoconference meeting the morning of the public convention, delegates and alternates were able to “meet” the three nominees, Marth said, as well as look over their resumes and ask some questions.

That was good, Marth said, but he wished they had had more time to do a critical review of the three. And not every district had such a meeting — a sore spot for delegates elsewhere.

Dinowitz in the past has defended the overall process, calling it a necessary and effective way to get nominations locked in.

Chantel Jackson, the nominee for the 79th Assembly District — and a newly elected delegate — released a critical statement of her own days after the judicial convention.

“Because there were only three candidates for consideration, they were nominated by default since there was no alternative candidate to consider,” Jackson said.

She cited dozens of qualified and interested attorneys in the district, wondering how many of them actually had a genuine chance at a nomination. Jackson called on the party to do more community outreach to educate voters and recruit nominees.

“The county organization must take an active role in recruiting highly qualified attorneys who have long-term community ties in this county and who are not just politically connected but rather people of service and integrity who are vested in the success of our communities,” Jackson said.