Speed bumps no more than a bump in the road 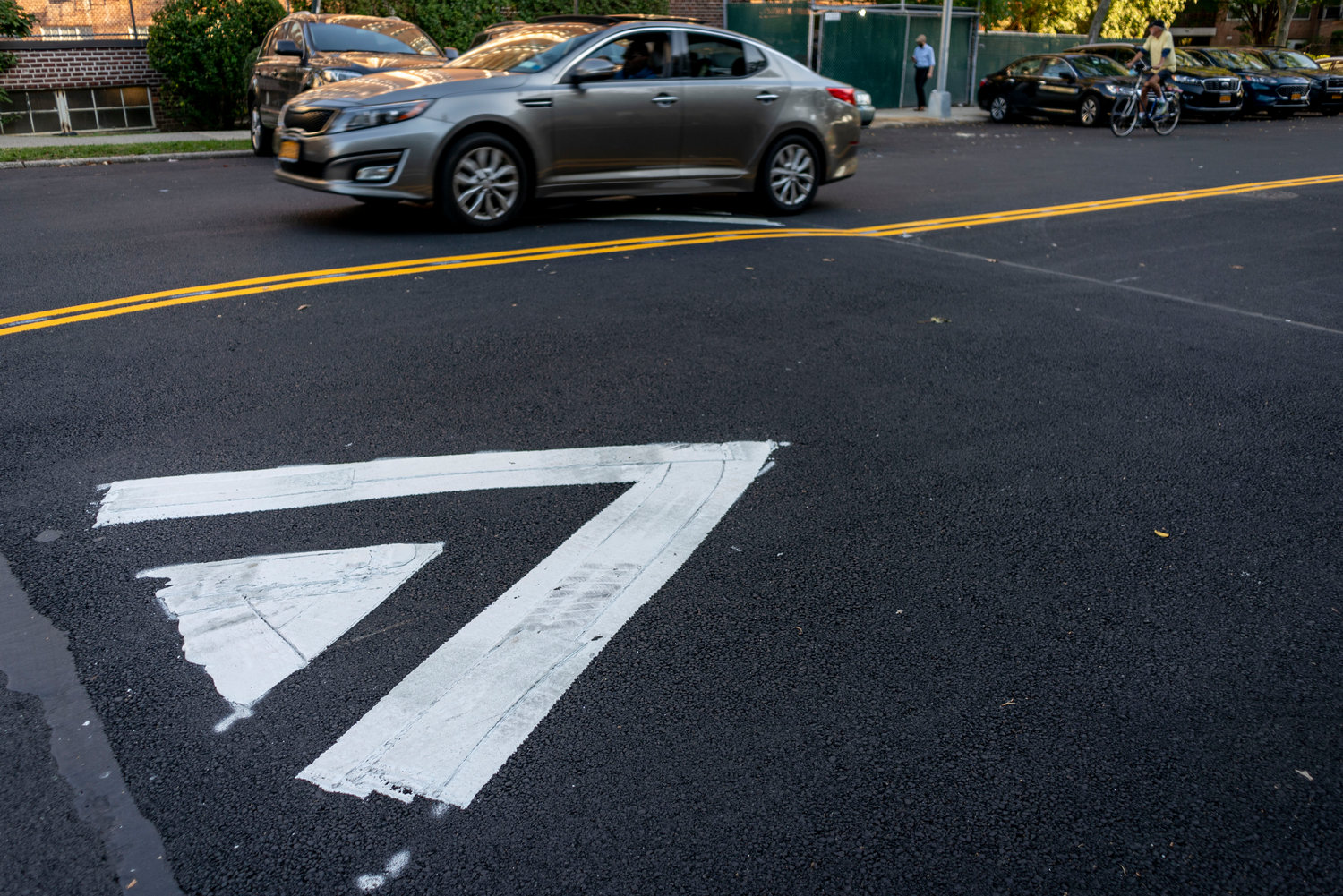 Speed bumps returned to Independence Avenue following Community Board 8’s traffic and transportation committee meeting last month. In spite of their return, drag racing continues to be a problem in the neighborhood.
HIRAM ALEJANDRO DURÁN 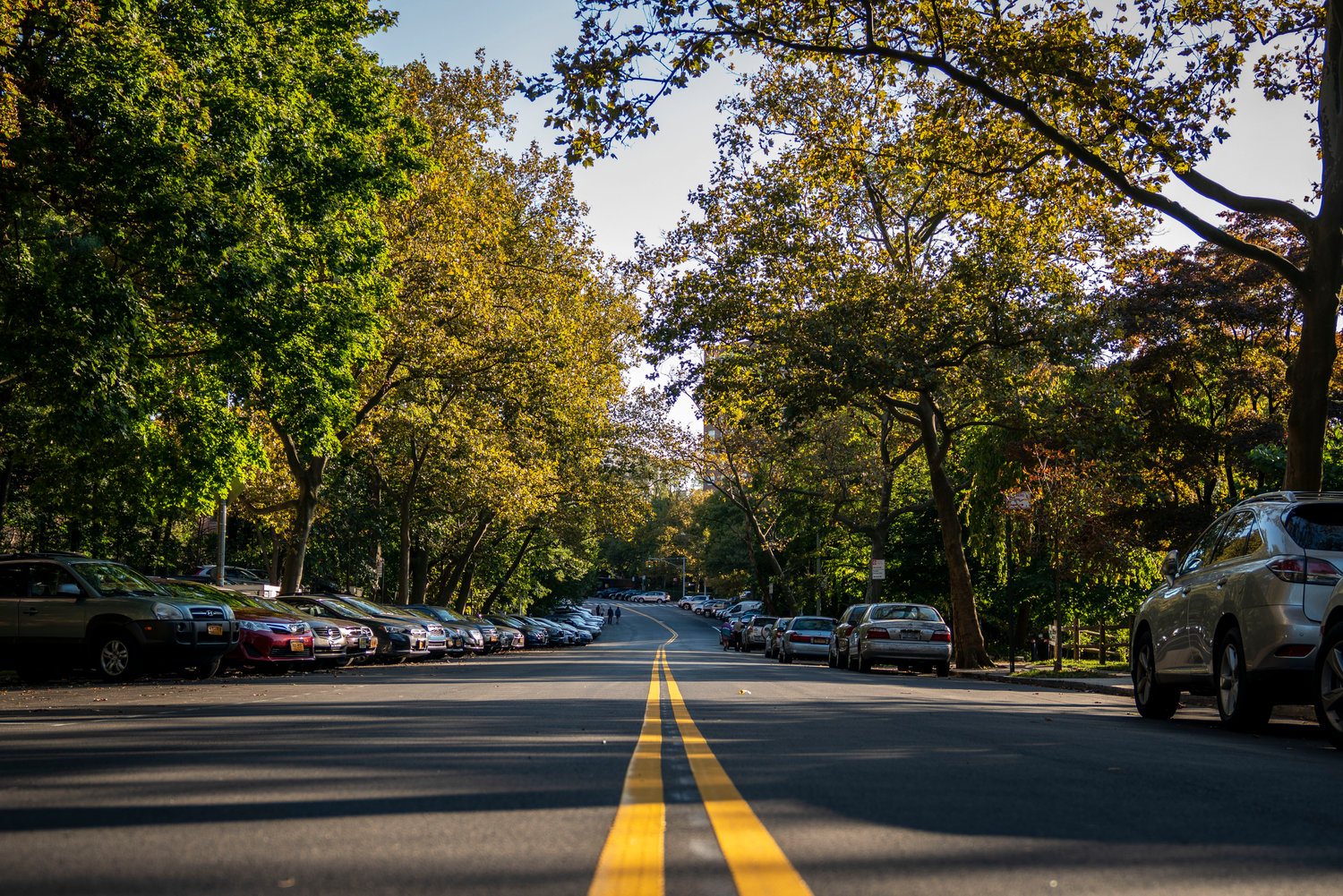 The long stretch of Independence Avenue goes from West 246th Street to West 232nd. Although speed bumps were recently reinstalled, Community Board 8 is considering recommending further changes to the area as drag racing in the neighborhood persists.
HIRAM ALEJANDRO DURÁN 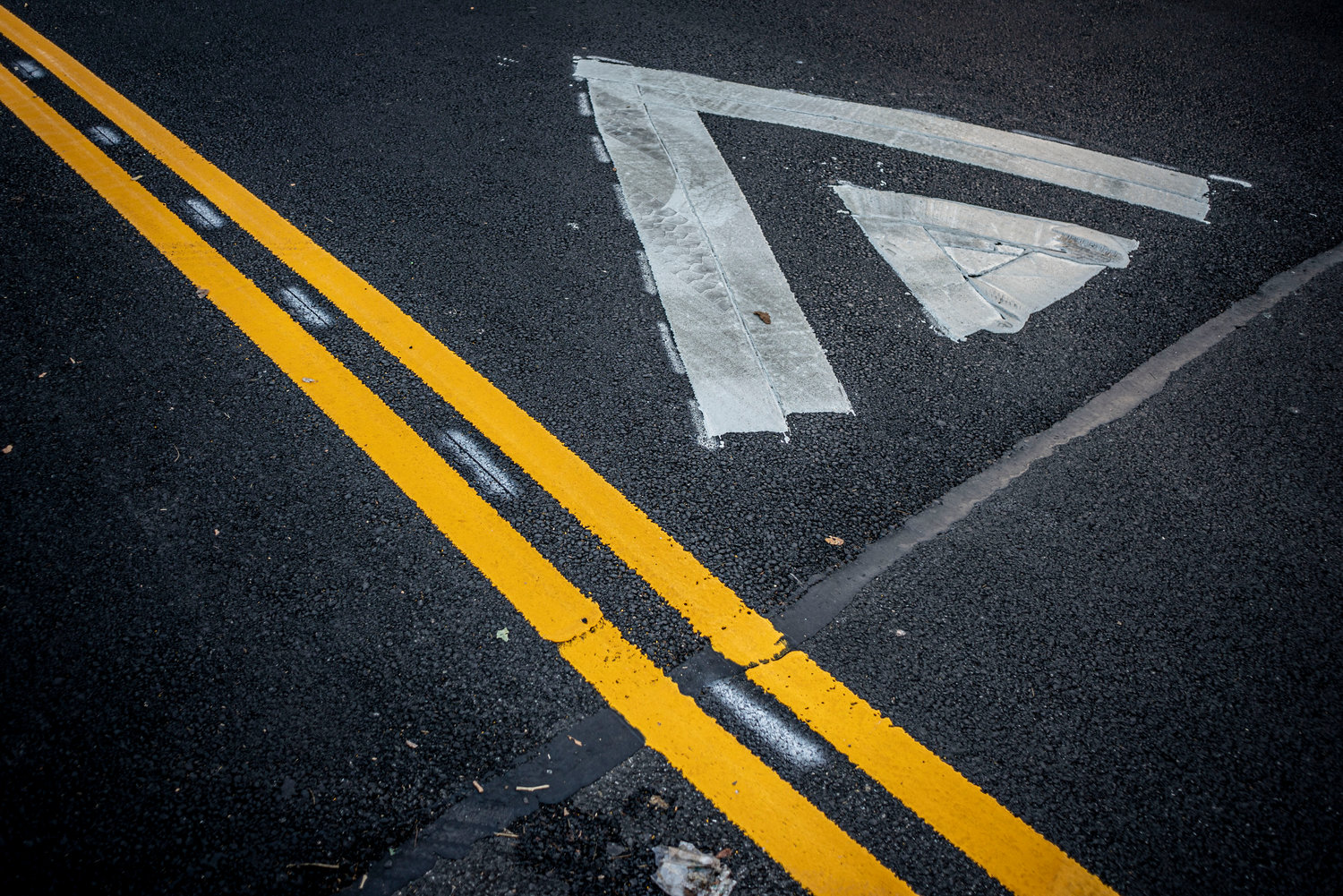 Ending drag racing along Independence Avenue and other problem streets in the neighborhood is proving to be a bumpy ride for Community Board 8’s traffic and transportation committee. A new working group within the committee plans to compile a report of possible solutions to present at the meeting next month.
HIRAM ALEJANDRO DURÁN 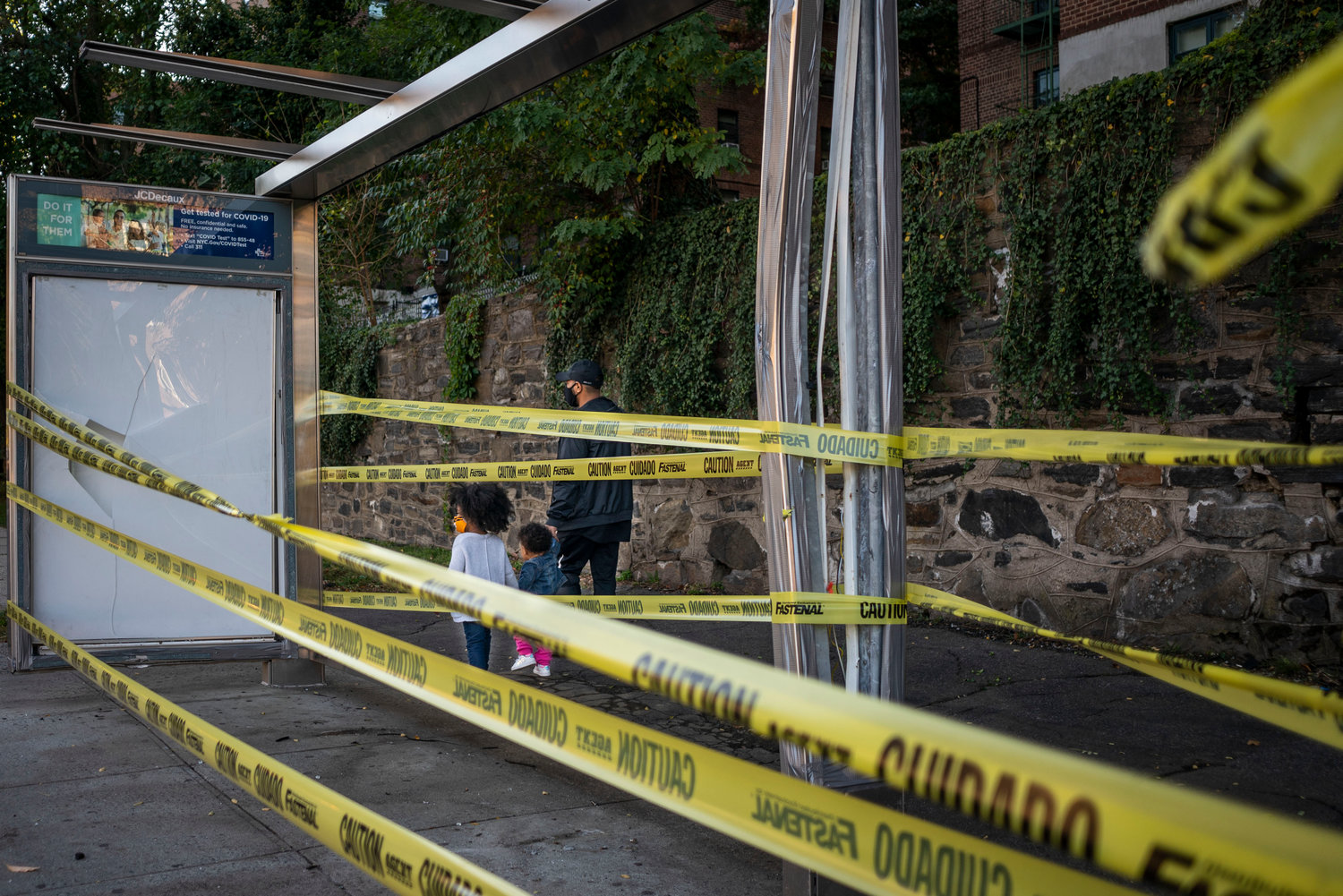 Although 50th Precinct commander Emilio Melendez couldn’t confirm if it was the result of reckless driving, the wreckage of a car accident that occurred in the wee morning hours of Oct. 11 serves as a grim reminder of what could happen if drag racing in the neighborhood doesn’t stop soon.
HIRAM ALEJANDRO DURÁN 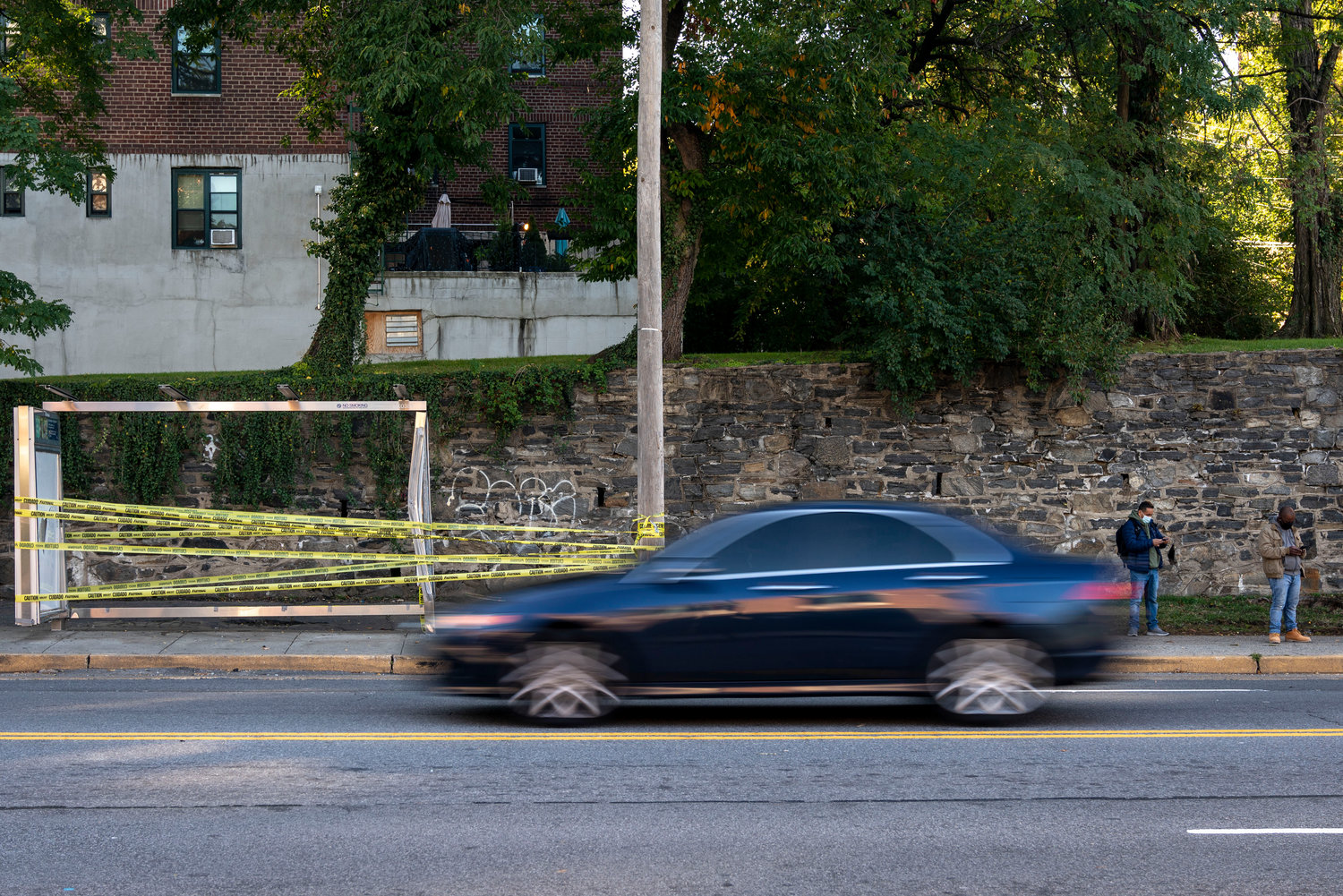 The remnants of an Oct. 11 car accident on Riverdale Avenue serve as a sobering reminder of the costs of reckless driving. While there was speculation about speeding or drag racing being the cause of the accident, 50th Precinct commander Emilio Melendez couldn’t confirm that was the case — although he did note the passengers’ reluctance to cooperate with officers, which shot up some red flags.
HIRAM ALEJANDRO DURÁN
Previous Next
Here's how you can help

There isn’t much the average person can do about drag racing or other reckless driving in their neighborhood — except report it.

At last month’s Community Board 8 traffic and transportation committee meeting, committee chair Dan Padernacht encouraged people to forego calling 311, and instead contact CB8 about drag racing incidents. He also requested any photographs or videos someone may have shot.

That’s not the case anymore, however. The 50th Precinct’s Capt. Emilio Melendez encourages flooding 311 with complaint as it could help his officers both better document the incidents and take action. Especially since his department is restricted when it comes to dangerous high-speed chases in dense residential neighborhoods.

“I want to stress to everybody this: Use the 311, especially if you see them parking (at) hydrants or blocking driveways,” Melendez said at the October committee meeting.

“That gives my officers the nexus to stop them on the spot without having to pursue. And that gives us the opportunity to issue summonses."

Like how birds’ return to the American northeast each spring spells the end of winter, it wasn’t a stretch to believe the return of speed bumps to Independence Avenue would herald the end of drag racing in the surrounding neighborhood. But apparently that wasn’t the case.

The city’s transportation department completed the work after the first major complaints of reckless driving in Spuyten Duyvil — especially on the largely straight, obstacle-free Independence Avenue. But the drag racers, apparently, remained. And it looks like Community Board 8’s traffic and transportation committee will have to work with city officials and local law enforcement to resolve the issue once and for all.

Committee chair Dan Padernacht introduced a few of his ideas during his committee’s meeting last week. Chief among them is a new working group focused specifically on drag racing. Headed by committee vice chair Deb Travis, the subcommittee includes some neighborhood residents living in the problem areas.

The new group’s goal is to explore what can physically change on problem streets like  Independence and Riverdale avenues to curb drag racing. Padernacht asked for the working group to compile a report of these potential solutions, which will likely be presented at next month’s committee meeting.

One of the sub-committee’s members, Samantha Charlip, lives along Independence and has been vocal about the issue on social media. In her opinion, the speed bump reinstallation championed by Assemblyman Jeffrey Dinowitz last month, did next to nothing to quell racing in her area.

“They created almost like an activity area for them,” Charlip said. “It’s really an obstacle course now.”

What neighbors are demanding is a larger police presence in the problem areas. Capt. Emilio Melendez, commander of the New York Police Department’s 50th Precinct, says his officers issued five summonses for drag racing along Independence and Riverdale avenues as well as the Henry Hudson Parkway in the past month. They’ve also apprehended one alleged racer.

Melendez briefly touched upon a few traffic accidents that occurred in the area, including one on Riverdale Avenue in the early morning hours of Oct 11, where a Mercedes-Benz flipped and crashed into a bus stop in front of P.S. 81.

“We can’t say that it was speeding,” Melendez told the committee. “But I can tell you right now, the driver and one of the passengers didn’t stick around to tell us what happened. They left the car there. In the car were four other people that were injured. Not one of them cooperated with us (or) told us what was going on.”

Melendez also noted two particular repeat alleged offender vehicles: a Chevrolet Tahoe and a white Toyota. However, only the owner of the Toyota actually lives in the area, which Melendez noted was a pattern. He said many of the offending cars are advertised on social media outside the neighborhood — and sometimes even New York — as cash rentals with “paper plates,” which makes tracing the drivers and vehicles more difficult.

That was the case for the Mercedes-Benz involved in the Oct. 11 accident, whose plate was traced back to a leasing company in Pennsylvania.

“The scam is that the vehicle is rented out to an individual, (and) that vehicle goes back to someone else,” Melendez said.

“The paper plate is legit, it goes back to a … shell corporation that these individuals use, and then they rent out these high-end vehicles for a large profit. And when the vehicle gets crashed or gets towed, well guess what? The company just gets it back. Or reports it stolen.”

With the combined influence of the NYPD and the new working group, Padernacht hopes a holistic approach to addressing drag racing will end the scourge once and for all. But one of the people running against him for Andrew Cohen’s city council seat isn’t waiting any longer.

Jessica Haller posted an online petition directed at Nivardo Lopez — the Bronx’s transportation department commissioner — calling for a study of neighborhood streets regularly used for drag racing. As of Tuesday afternoon, the petition had nearly 525 signatories.

Haller said she first reached out to Lopez’s office asking if there were any street redesigns in the works for drag racing hotspots in the community. On the call, she learned no redesign requests had been submitted.

Although the speed bumps on Independence Avenue were reinstalled, Haller thinks more long-term solutions need to be implemented — and DOT needs to be involved in developing those solutions.

“Until we redesign the streets — until we actually turn Independence Avenue into a pedestrian, child, older adult … and bike-friendly lane — it’s going to be a runway,” Haller said. “Writing a letter to the DOT and demanding the reinstallment of speed bumps is not a street redesign.”

Haller’s actions might come from a good place, Padernacht said, but she’s addressing the issue out of order, especially where city-level red tape is concerned.

“Any request for structural changes … is normally directed back to the community board for review prior to the DOT taking action,” Padernacht said. “For those familiar with how this agency works, this is done — among other reasons — for stakeholder input prior to the agency taking action.”

For now, it seems ending drag racing in the neighborhood will need to be a holistic effort, with combined contributions from the community board and the traffic and transportation committee’s new working group, law enforcement and the city’s transportation department.

“We’re being deliberate in this review to consider all needs of the community,” Padernacht said, and to “create a plan that works.”