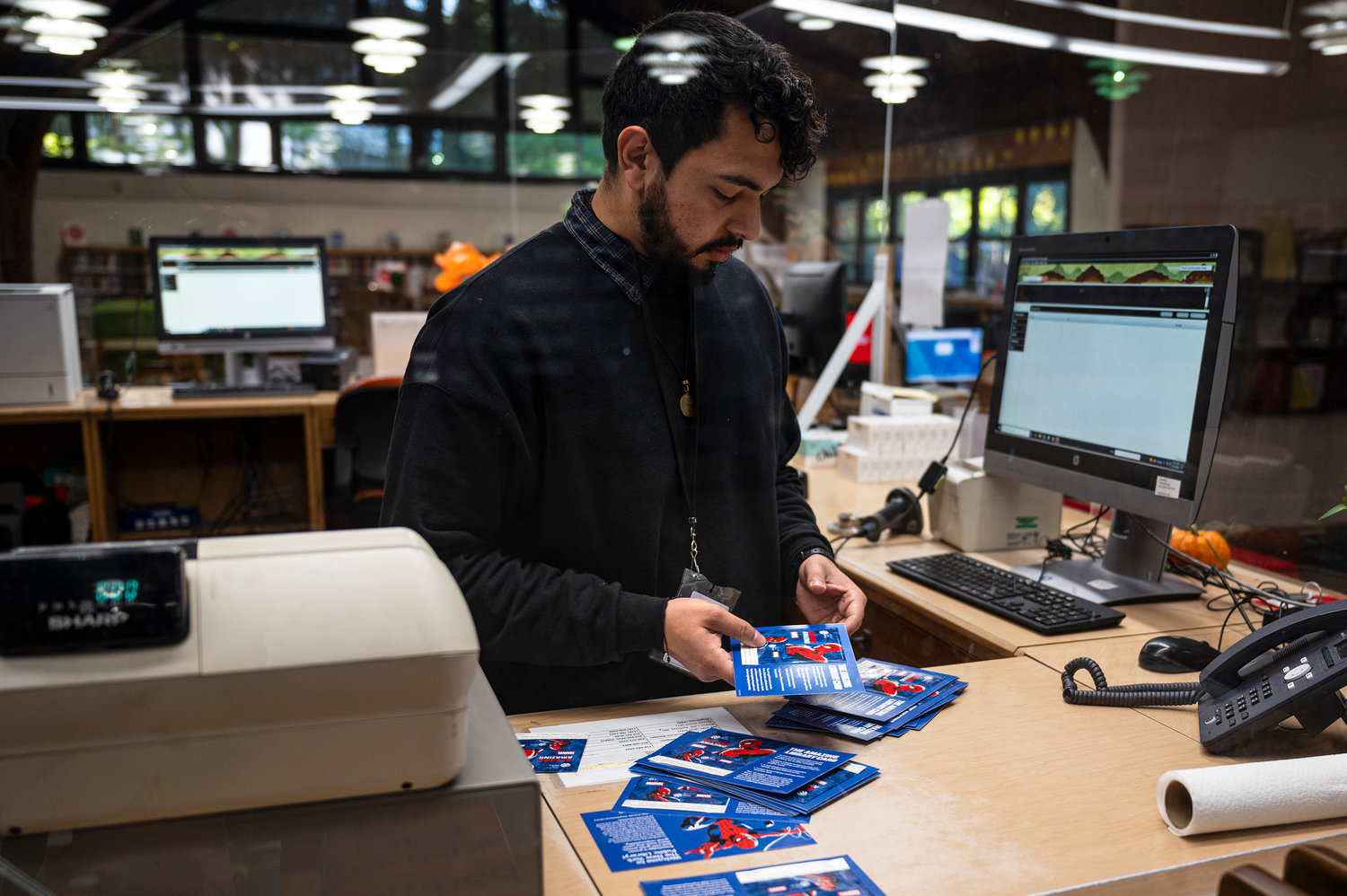 Christian Otero is the information assistant at the Riverdale Library Branch. He is in charge of the kids STEM Lego program, which teaches children science and physics.
Hiram Alejandro Durán 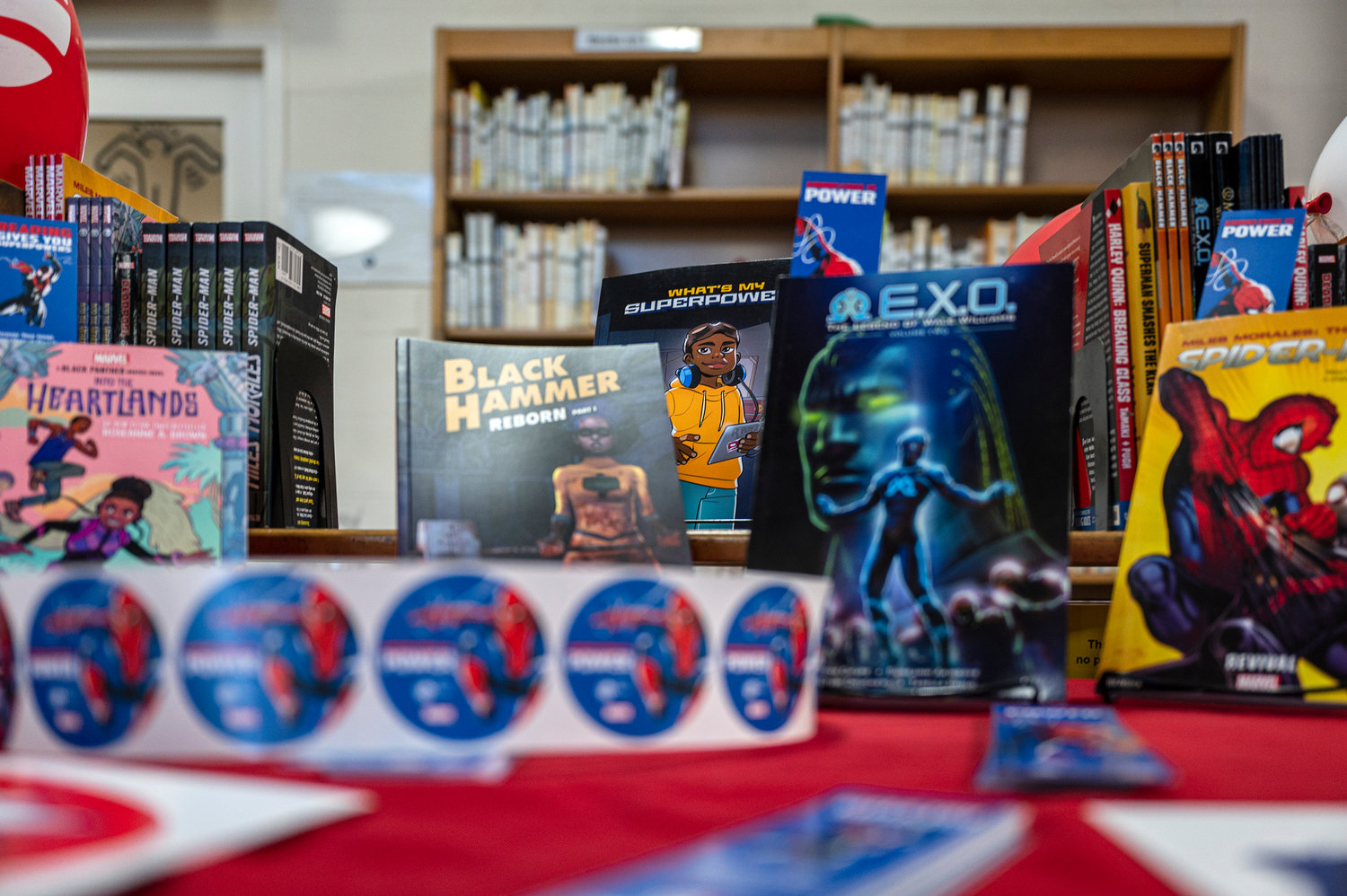 The New York Public Library released a new limited-edition Spider-Man library card on Oct. 11. But it was not only the card that caught attention to many fans. The Marvel partnership grew to distribute free comic books, stickers and bookmarks.
Hiram Alejandro Durán
Previous Next
A tale of Comic Con

John Pantusa has been going to New York Comic Con since 2015. He would go with his friends or arrive at the Jacob Javits Center solo and make friends there.

It is customary for people to cosplay as their favorite characters from TV shows, movies, or comic books during these conventions that generally happen around the country once a year.

His first cosplay was Edward Kenway. He told The Riverdale Press. That character is not from the comic book world. It is a video game Sci-Fi, “Assassins Creed.” The character’s more notable features are a leather-like material with an attached hood, swords, and a red waistband.

On Oct. 6 he skipped out on cosplaying because he didn’t have enough time to prepare. Next year, he said he would love to cosplay as a clone trooper or anything “Star Wars” related.

Pantusa is a sophomore at Manhattan College and studying to be a computer engineering major.

Rebecca Brown-Barbier reads books such as comics and light novels in her free time. Her favorite is “Ascendance of a Bookworm,” a Japanese book where a librarian’s world turns upside down. Ironically, the character is in a world without books.

Brown-Barbier couldn’t imagine a world without books because she is a librarian and the manager of the Riverdale New York Public Library on Mosholu Avenue. Books are something she sees every day when she goes to work.

“When I was younger, I was that girl in the comic book store,” she said.

Up until today, she can’t decide which one is her favorite. She loves them all, she told The Riverdale Press.

The library has a display that features its comic books. Recently, they relocated the display further down the aisle near the reading tables for better access.

For the past decade, comic-book-based movies made their way to the big screen with many breaking box office records. Even comic books themselves saw an increase in sales last year.

New data shows that comic publishing grew 60 percent between 2020 and 2021, according to third-party industry watcher Comichron. And “The Amazing Spider-Man” No. 1 landed second place in April’s sales in Diamond Comic Distributors, which ordered 92,000 copies.

The New York Public Library wants to encourage readers to expand their reading knowledge and return to the library and check out what it offers. The timing couldn’t be any better since New York Comic Con was taking place a week earlier at the Jacob Javits Center.

As part that effort, the library has teamed up with Marvel Entertainment to produce and distribute a limited edition Spider-Man public library card released on Oct. 11. Additionally, they are also giving out complimentary comic books while supplies last.

The neighborhood crime fighter’s first appearance was in “Amazing Fantasy”  No. 15. But it is also big for the Bronx. Its co-creator, the late Stan Lee, is an alumnus of DeWitt Clinton High School.

His other works include the Hulk, Iron Man, the Black Panther, and more.

This release is also the first anniversary of when library book late return fines were eliminated. The effort is to break down barriers to ensure patrons have open access to the library and gain knowledge.

Marvel celebrated a significant milestone while releasing its 900th issue of “The Amazing Spider-Man.”

The historic move was a plot point as well. Peter Parker returns a large stack of overdue books to the library after learning about eliminating late fines.

The NYPL distributed 150,000 cards, and each branch received a portion in the Bronx, Manhattan, and Staten Island.

According to the library data, it feature’s 92 locations across the three boroughs. If distributed evenly, each branch received over 1,600 cards.

“The moment the NYPL website posted about the card, patrons have been coming in asking about it — it certainly created a buzz in the community,” said Christian Otero, the information assistant at the Riverdale branch.

Otero is in charge of the Kids STEM Lego program. Each week, children ages 5 and up learn about science and physics while playing with Legos.

Other programs include painting, podcasts, science, and study sessions.

Fans’ spider senses were tingling as they waited patiently for the new card. Otero has been a Spider-Man fan since he was a child. He was excited to have the card while being able to share it with others with a similar interest.

“It was amazing,” Brown-Barbier said. “I am delightfully surprised a lot of people are coming back who haven’t used their library card in years.”

Different faces and some new ones of all ages were opening the library’s front door asking if the new limited-edition card was still available.

The library’s phone line was also ringing throughout the day, with people calling worried they might have missed their chance to snag a new card.

People from Yonkers and other sections of the Bronx came to Riverdale. Brown-Barbier said there is great parking in the neighborhood compared to other sections, which is why they are receiving a higher demand.

When The Press visited the library the following day of the release, the Spider-Man stock was still available.

“When they come in for the library card, we have the opportunity to tell them about our collection,” Brown-Barbier said. “All ages love reading graphic novels.”

Within the collection of Marvel comics, including characters such as Miles Morales and Venom from Spider-Man there is an entire Manga — graphic novels and comics originating from Japan — section that people might not know about.

The librarian said she enjoyed them and had read them herself because it has mass appeal. From her experience, she witnessed all ages reading such books.

In fact, depending on how it is written, comics can be educational.

In 2016, the city’s department of education allowed teachers to use the graphic novel “March,” co-written by Rep. John Lewis and Andrew Aydin — policy advisor to congressman Lewis. The newly added curriculum was aimed at the social studies department to teach the Civil Right movement and voter rights.

“March” is a trilogy and “Book One” won the Coretta Scott King Book Award in 2014.

The education department added the novel into its curriculum to serve as supplementary material to help explain complicated subjects to students in a way that is a natural language.

Brown-Barbier has witnessed teachers come into the library wanting to check out the “March” series for themselves.