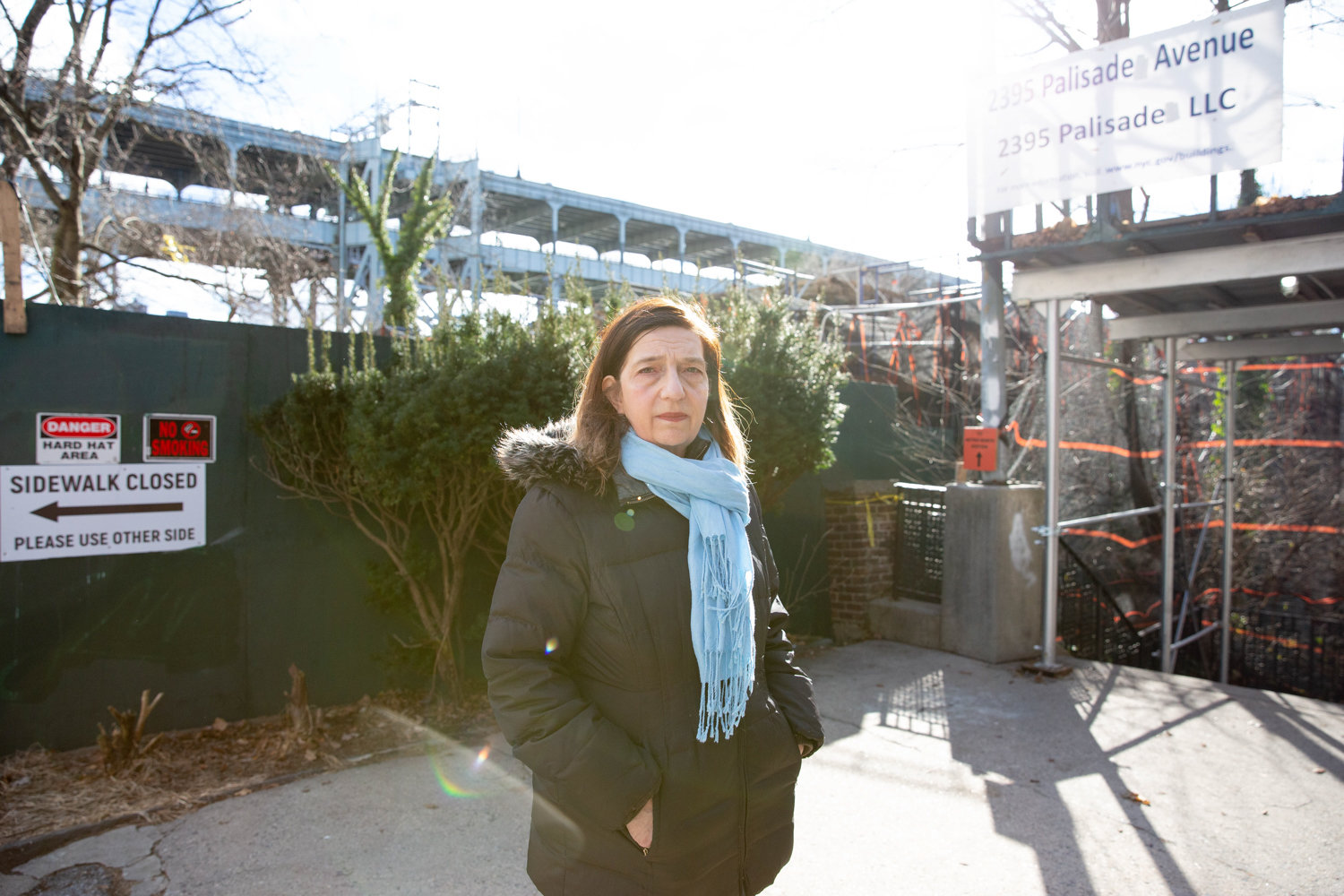 Community activist Stephanie Coggins led the fight to get Bradley Terrace, the step street that runs parallel to where the Villa Rosa Bonheur once stood, co-named for John J. McKelvey Sr., the architect who built the fabled apartment building. Community Board 8 has approved the proposal, but it’s on Councilman Andrew Cohen to introduce it to the city council to help make it official.
EIAN KANTOR / File 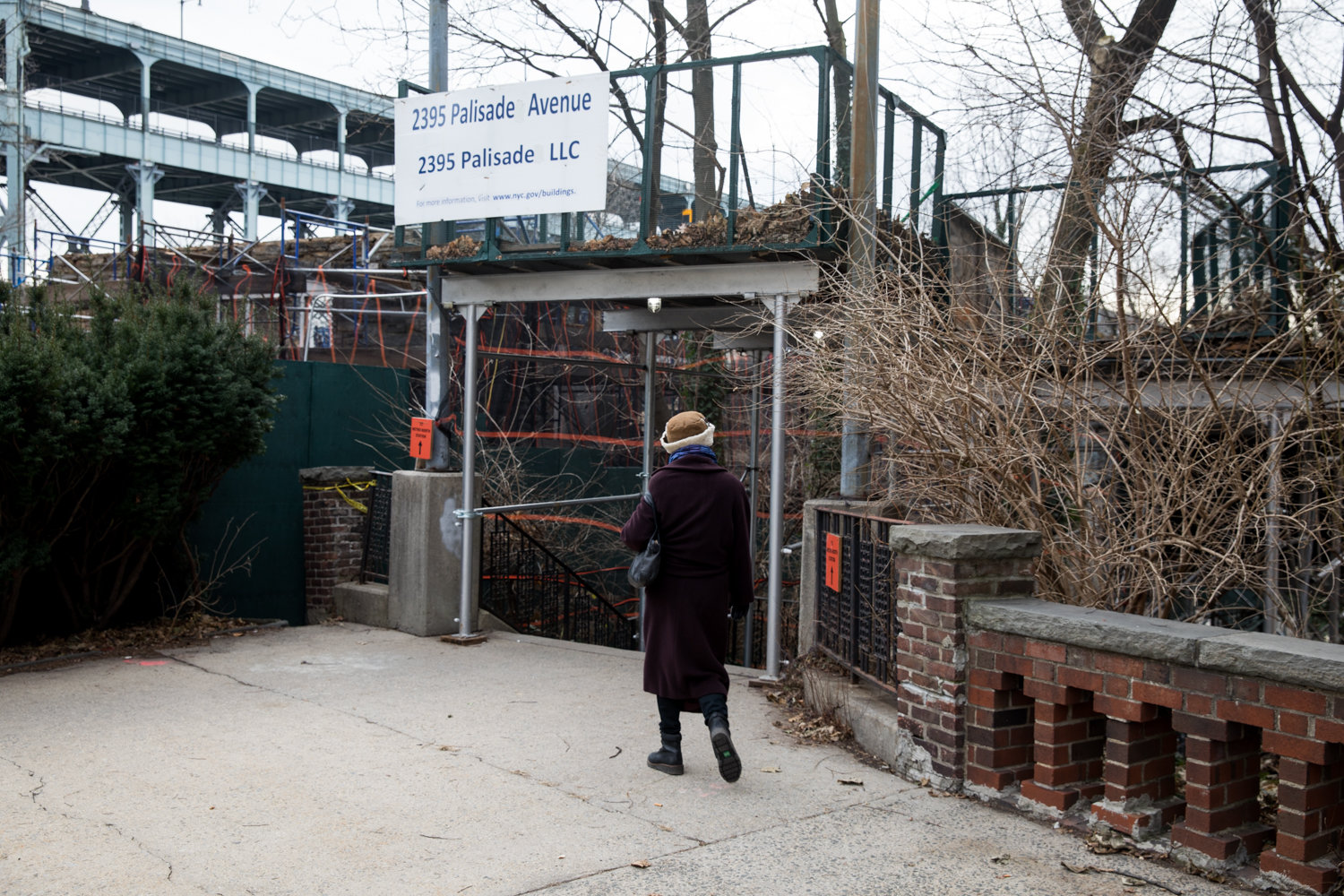 A pedestrian walks toward Bradley Terrace, the step street community activist Stephanie Coggins wants to rename in honor of developer John J. McKelvey Sr. Community Board 8 gave approval to the proposed renaming, but now it’s up to Councilman Andrew Cohen to introduce it to the city council.
JULIUS CONSTANTINE MOTAL / File 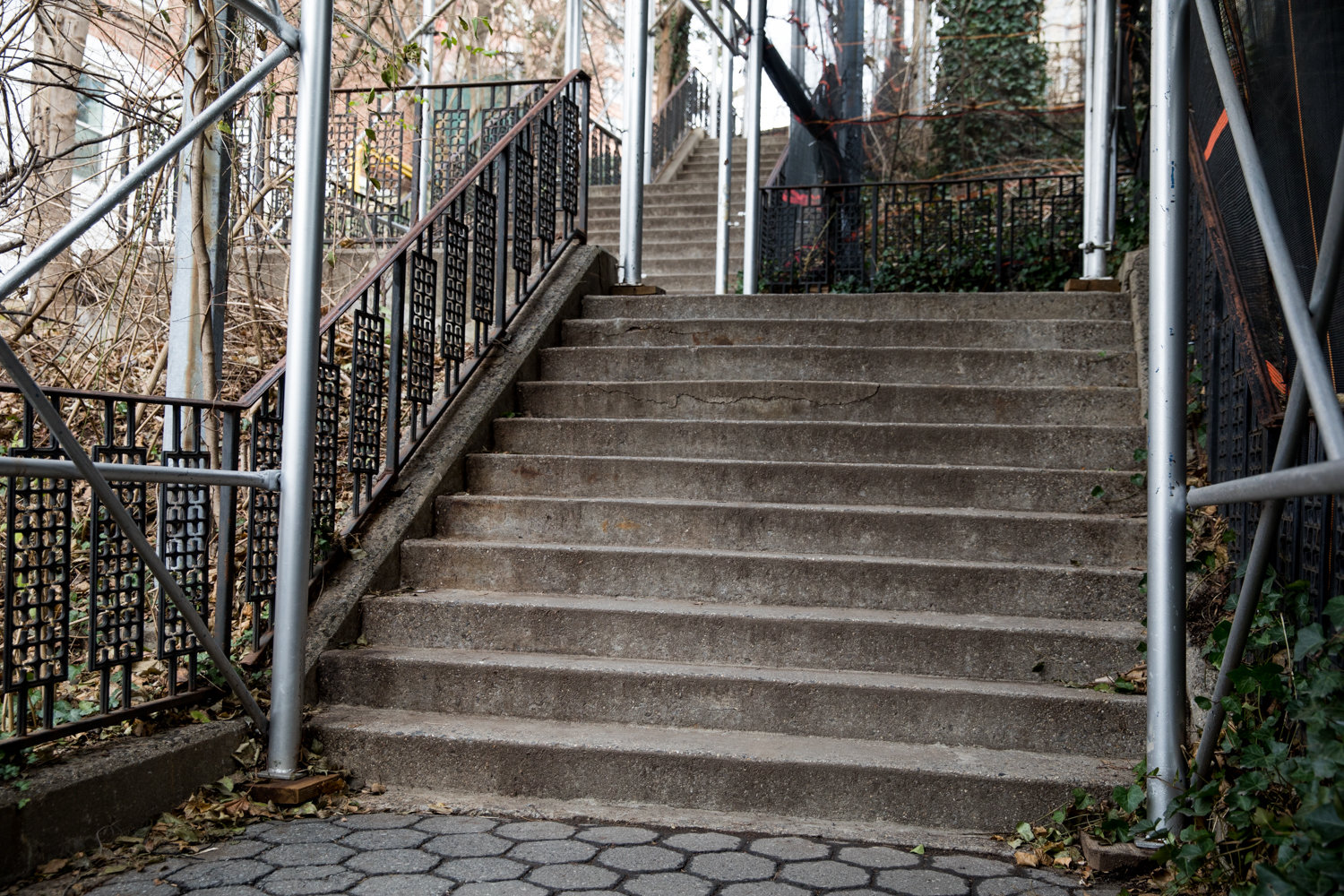 The proposed street co-naming for Bradley Terrace in honor of the Villa Rosa Bonheur, and its architect John J. McKelvey Sr., has cleared the initial hurdle with Community Board 8’s approval. Now, it’s up to Councilman Andrew Cohen to introduce it to the city council and get it approved.
JULIUS CONSTANTINE MOTAL / File 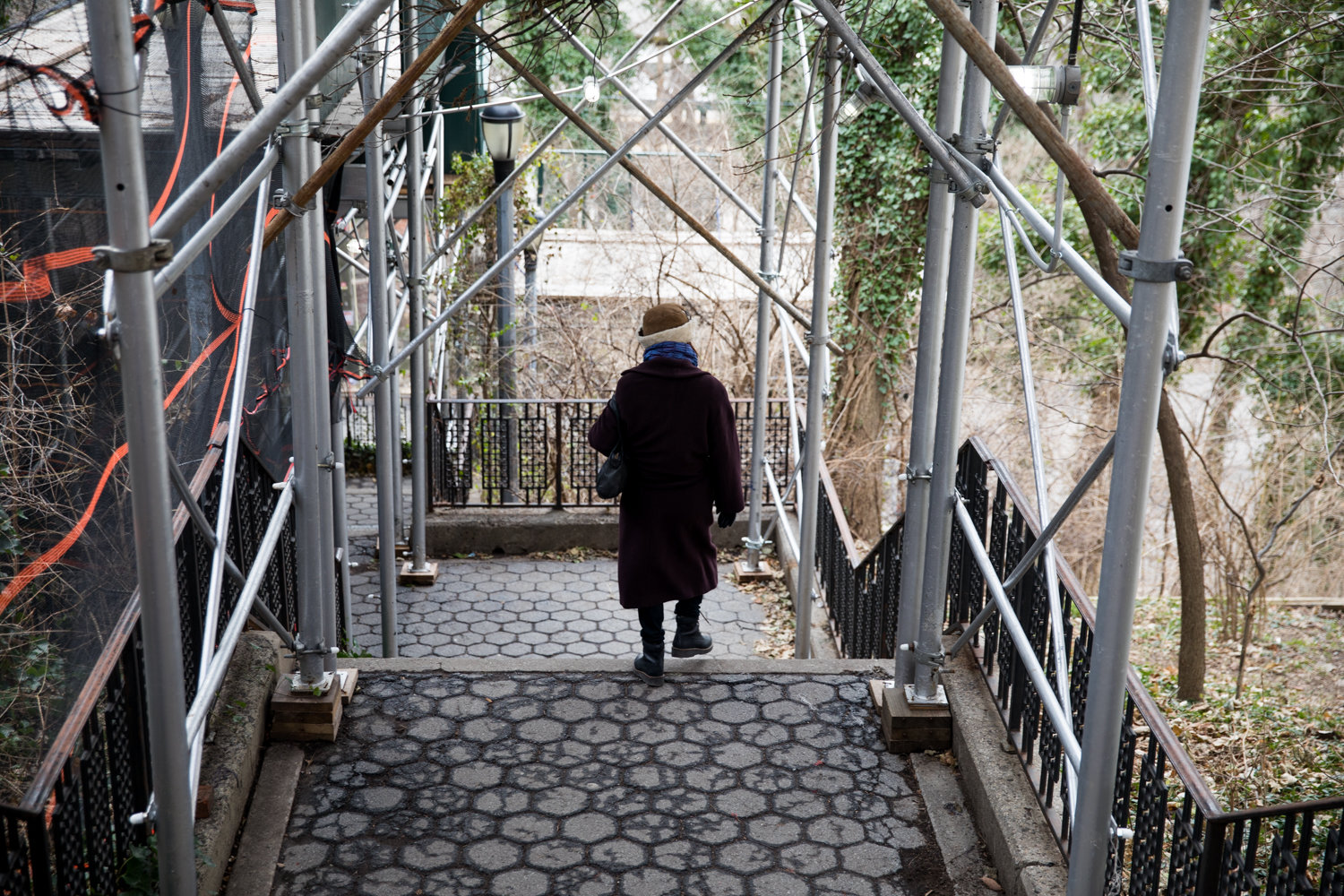 A pedestrian walks down Bradley Terrace, the step street community activist Stephanie Coggins has been campaigning to get co-named in honor of the historic apartment building Villa Rosa Bonheur and its architect John J. McKelvey Sr. Community Board 8 has approved the proposal, but it’s on Councilman Andrew Cohen to introduce it to the city council to help make it official.
JULIUS CONSTANTINE MOTAL / File
Previous Next
By MICHAEL HINMAN

When it became clear that nothing was going to stop the century-old Villa Rosa Bonheur apartments from becoming history, Stephanie Coggins decided she would make sure it was history her Spuyten Duyvil community would never forget.

Despite a year-long fight, developers succeeded in razing the seven-unit apartment building at 2395 Palisade Ave., making room for a seven-story, 55-unit apartment building. Coggins was one of dozens of neighbors who petitioned, protested — everything short of chaining themselves to bulldozers — to stop the development.

But through it all, the paralegal found something she wasn’t expecting: A hefty helping of history, including Villa Rosa Bonheur’s developer, John J. McKelvey Sr. Earlier this year, Coggins started a new quest — to ceremonially re-name the Bradley Terrace step street between Palisade and Edsall avenues after McKelvey, and the landing at the top of the stairs after the villa itself.

Her request made it through Community Board 8’s traffic and transportation committee earlier this year. And while the main community board has stopped in-person meetings for now, they’re still getting together — remotely. And last week, the board gave its blessing for the historic names to be added to the neighborhood.

Now all it needs is the support of Councilman Andrew Cohen, who could sponsor legislation in the city council making the co-name official.

“When I set out a few months ago to petition for the street co-namings of Bradley Terrace with that of Villa Rosa Bonheur and John J. McKelvey Sr., I knew about 75 percent less about the history and culture of Spuyten Duyvil and Riverdale,” Coggins wrote in a letter to the community board, that was published April 9 in The Riverdale Press.

“I have come to realize that the vast majority of our residents have a similar lack of perspective about the place they call home.”

Cohen, through a spokeswoman, said he hasn’t officially received the co-naming request from the community board, so he hasn’t had a chance to review it.

Street co-namings like this don’t actually change the name of the street, but usually provide signage below official names to help honor people, and sometimes places.

Typically, the city waits two years after someone dies before considering such an homage, but those are not rules written in stone, and the city council has the power to sidestep those rules whenever they like.

One such example came just a few years ago when Cohen introduced legislation that honored the memory of his one-time community liaison Andrew Sandler. Cohen had the corner of Waldo Avenue and West 238th Street near An Beal Bocht Cafe ceremonially renamed in Sandler’s honor, even though he had just died earlier that year from cancer.

McKelvey, however, more than qualifies for the more typical waiting period to receive such an honor. He died in 1947.

“I have a lot of frustration about our history in Spuyten Duyvil and Riverdale because we’re losing it,” Coggins told The Press in January. “With the exception of the Kingsbridge Historical Society doing what they can to keep track of some buildings, people are getting confused, and developers are coming in and they’re ripping down historical homes, and nobody knows what to do about it.”

Despite the unique architecture and age of Villa Rosa Bonheur — one of Spuyten Duyvil’s three “sisters” that include the Villa Charlotte Bronte and the Villa Victoria — the structure wasn’t protected by the city’s landmarks commission. With zoning on the property allowing for higher density construction, Timber Equities — which purchased the property through a subsidiary in November 2017 for $2.6 million — was able to move forward with its plans as-of-right.

Coggins sees the street co-naming as a way to continue honoring the history of the building McKelvey constructed on a cliff overlooking the Harlem River, now in the shadow of the Henry Hudson Bridge. She also hopes it will serve as a catalyst for future attempts to preserve history.

“Perhaps Villa Rosa Bonheur’s greatest contribution was waking us up to the existential crisis we now face for the survival of the character of our community,” Coggins wrote in her letter to the community board last month.

“We need to actively protect our historical and ecological treasures. And for what’s already lost, we need to educate the public as to the tragic results of losing focus on preservation.

“We need to recognize the urgency of historical and environmental preservation, and afford them primary roles in Riverdale development priorities.”