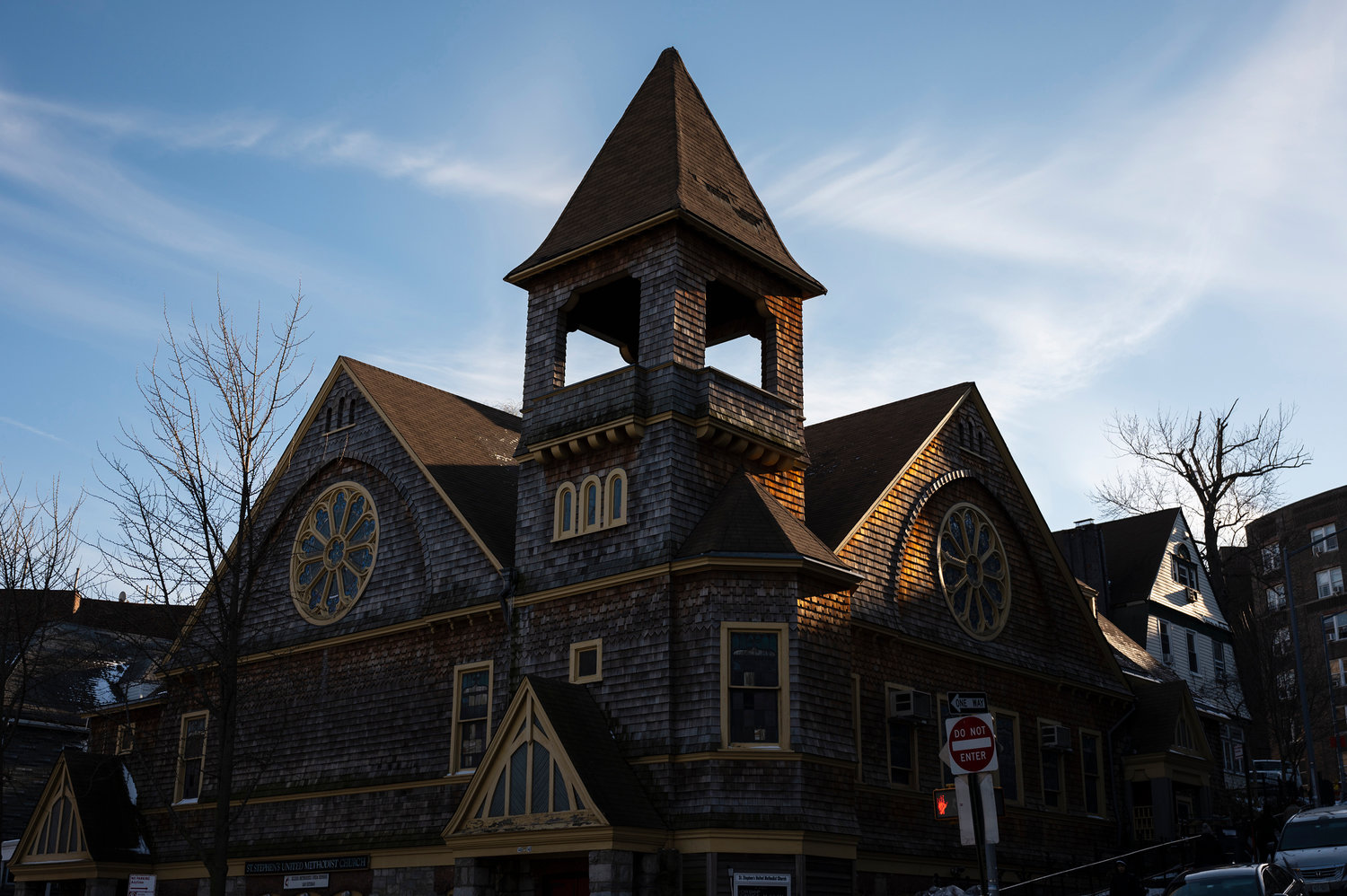 Parishioners at St. Stephen’s United Methodist Church in Marble Hill say it’s in dire need of repairs. They must raise $50,000, but there isn’t enough attendance between the church’s English and Spanish congregations to collect the funds fast enough.
Hiram Alejandro Durán 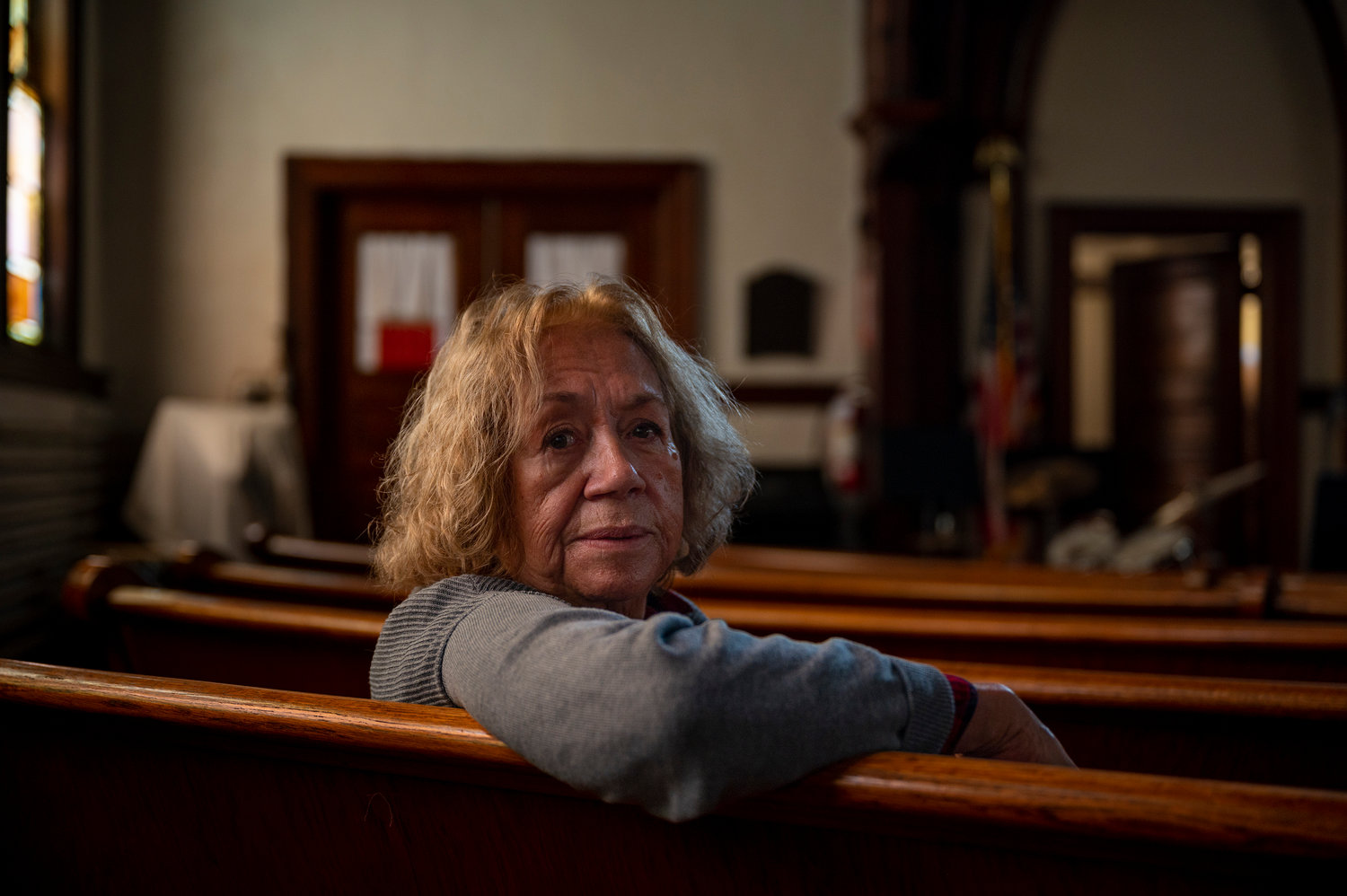 Naomi Gonzalez, president of the St. Stephen’s United Methodist Church board of trustees, would like to see the bell return to the top of the church’s Marble Hill tower. But before that can happen, the West 228th Street institution must raise funds in order to repair the deteriorating façade.
Hiram Alejandro DurÃ¡n 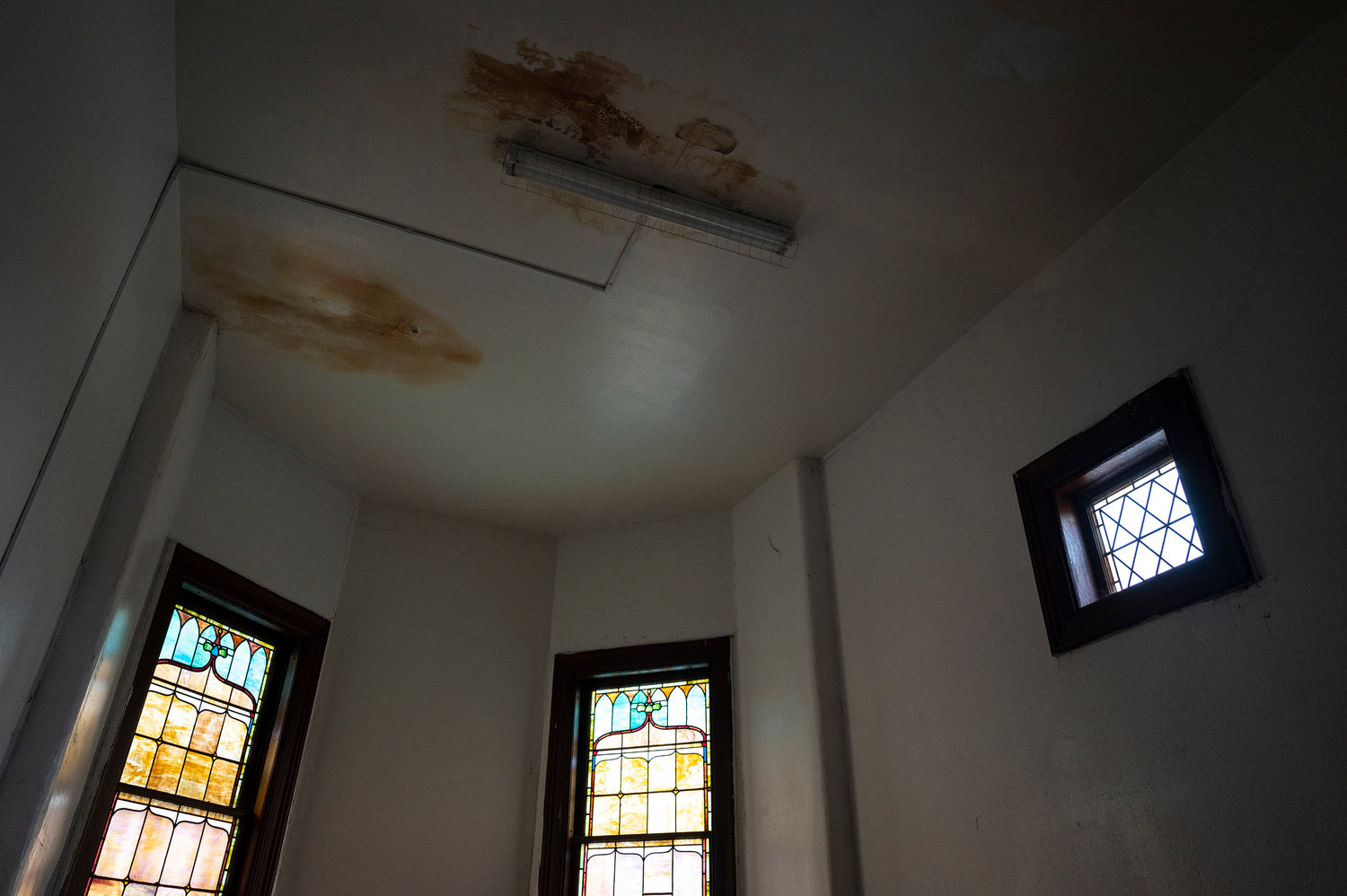 Water damage on the roof beneath the bell tower at St. Stephen’s United Methodist Church in Marble Hill is one of several issues parishioners hope to repair this summer. But the costs to renovate the building are upward of $50,000 — a price the West 228th Street church struggles to afford because the coronavirus pandemic has wiped out worship services, and many of the financial offerings that come with it.
Hiram Alejandro Durán 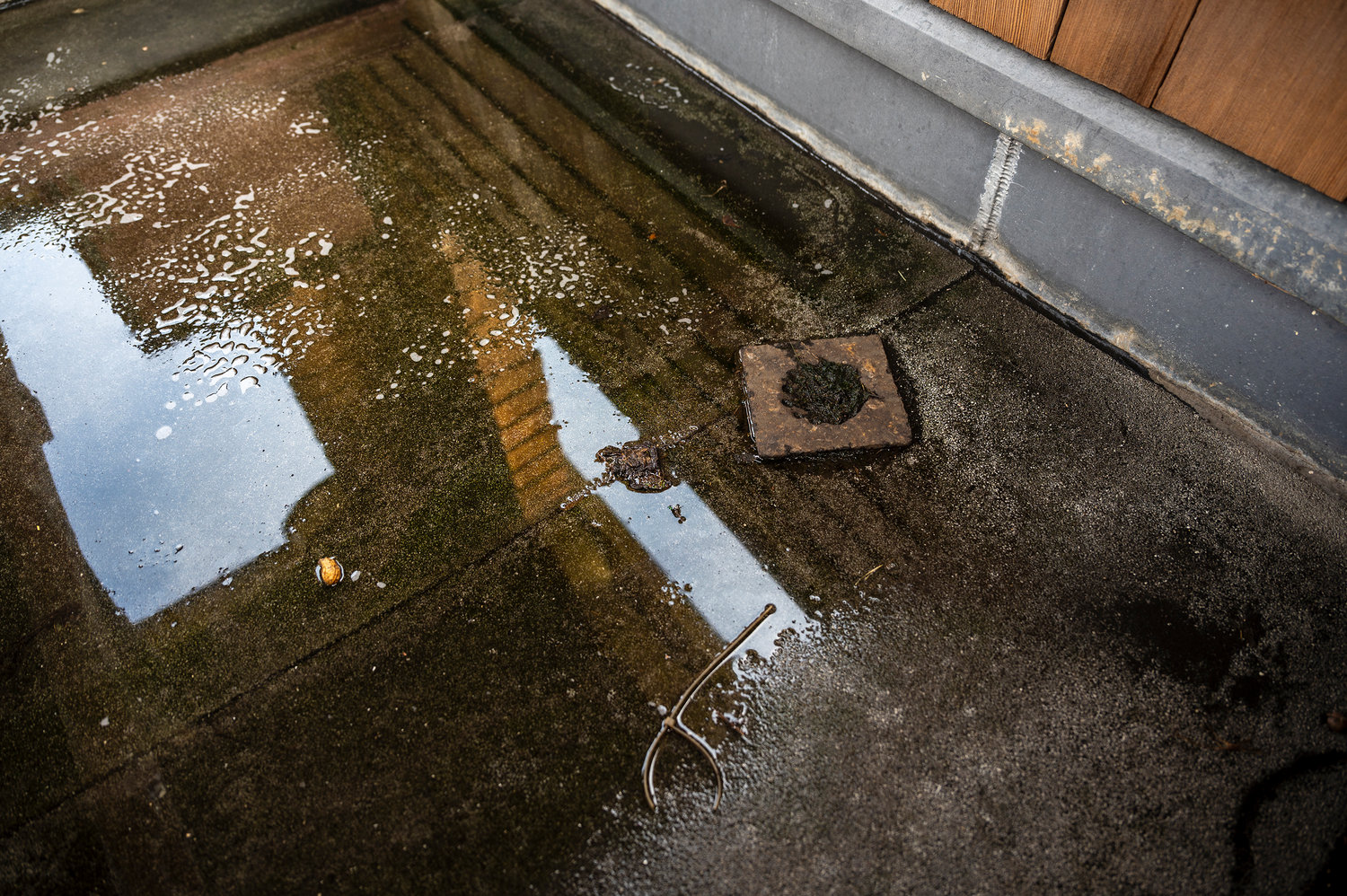 The bell tower at St. Stephen’s United Methodist Church in Marble Hill has been retaining water despite having a drainage pipe installed. The retention has only added to the tower’s structural weakness, members say. Now the church must raise funds upward of $50,000 just to begin repairs.
Hiram Alejandro Durán 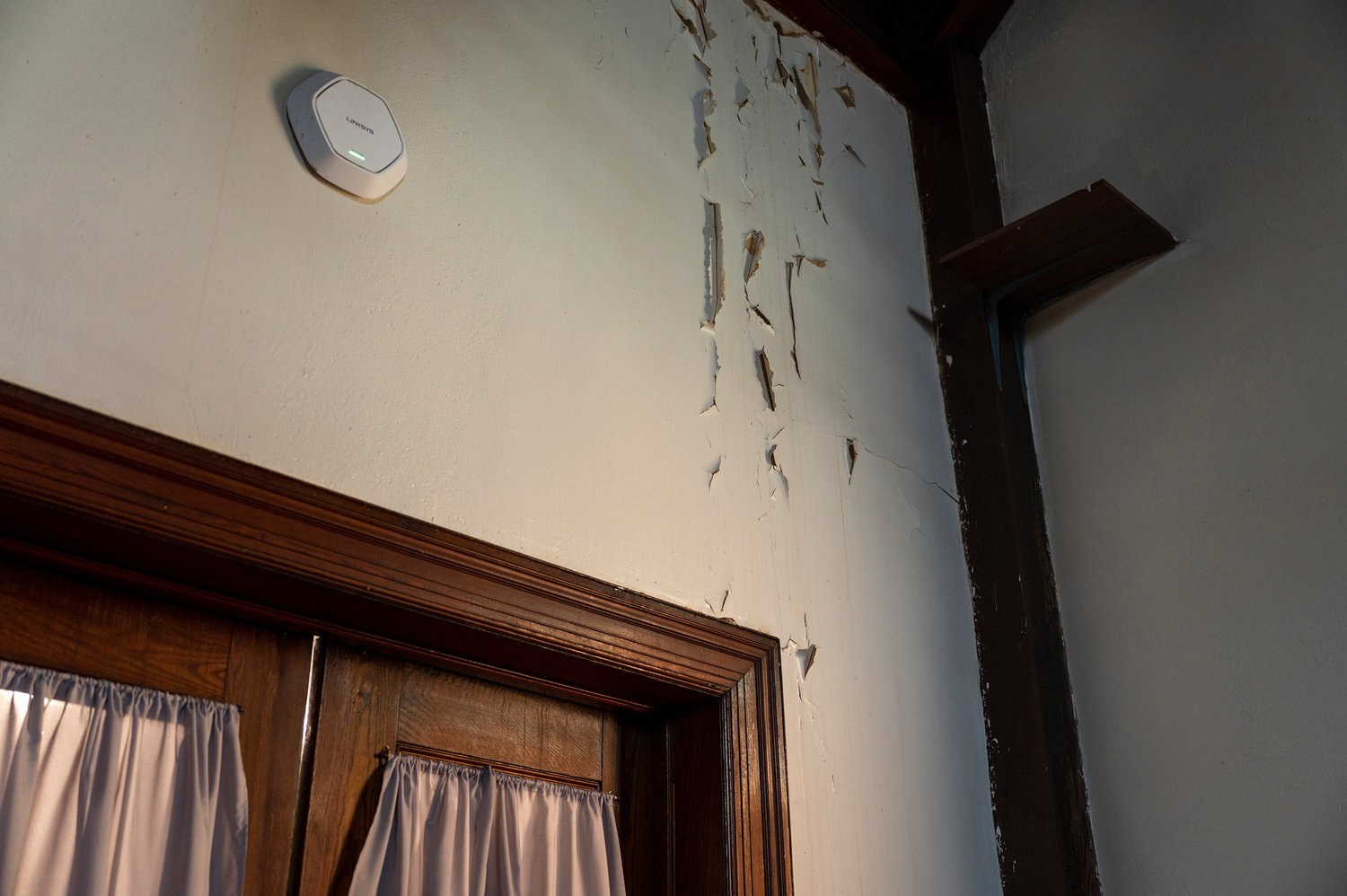 Water damage on the wall of the main chamber is just one of the issues St. Stephen’s United Methodist Church must address in restoring its historic West 228th Street structure. Years of damage from heavy rain and devastating storms have put an immense amount of stress of the building’s façade, members say. But in order to make those repairs, the church must raise $50,000.
Hiram Alejandro DurÃ¡n 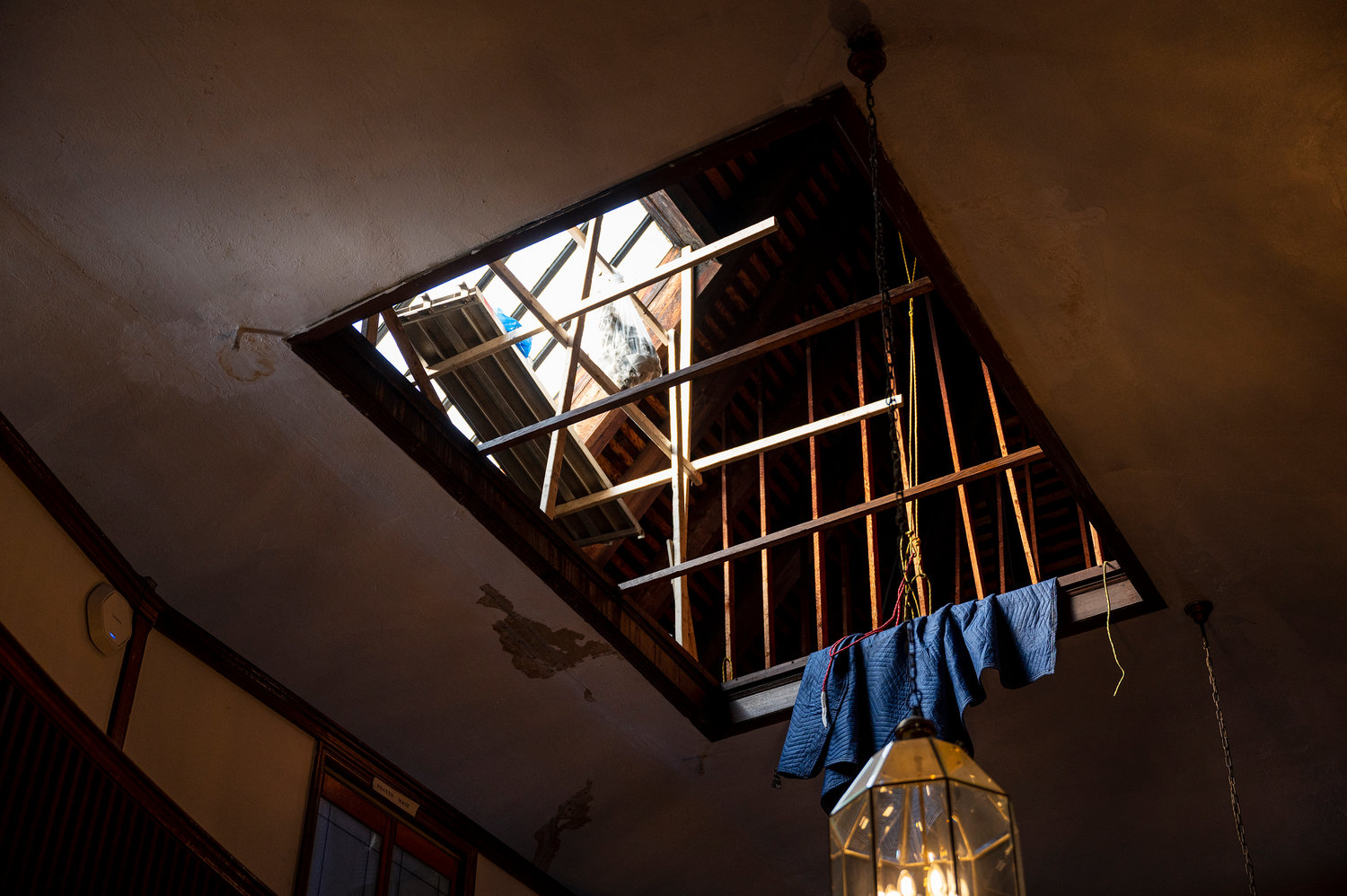 Parishioners at St. Stephen’s United Methodist Church in Marble Hill would like to see its skylight reinstalled. It was removed because the wooden structure it sits on is compromised by water damage. The church now needs $50,000 to begin repairs on its façade.
Hiram Alejandro DurÃ¡n 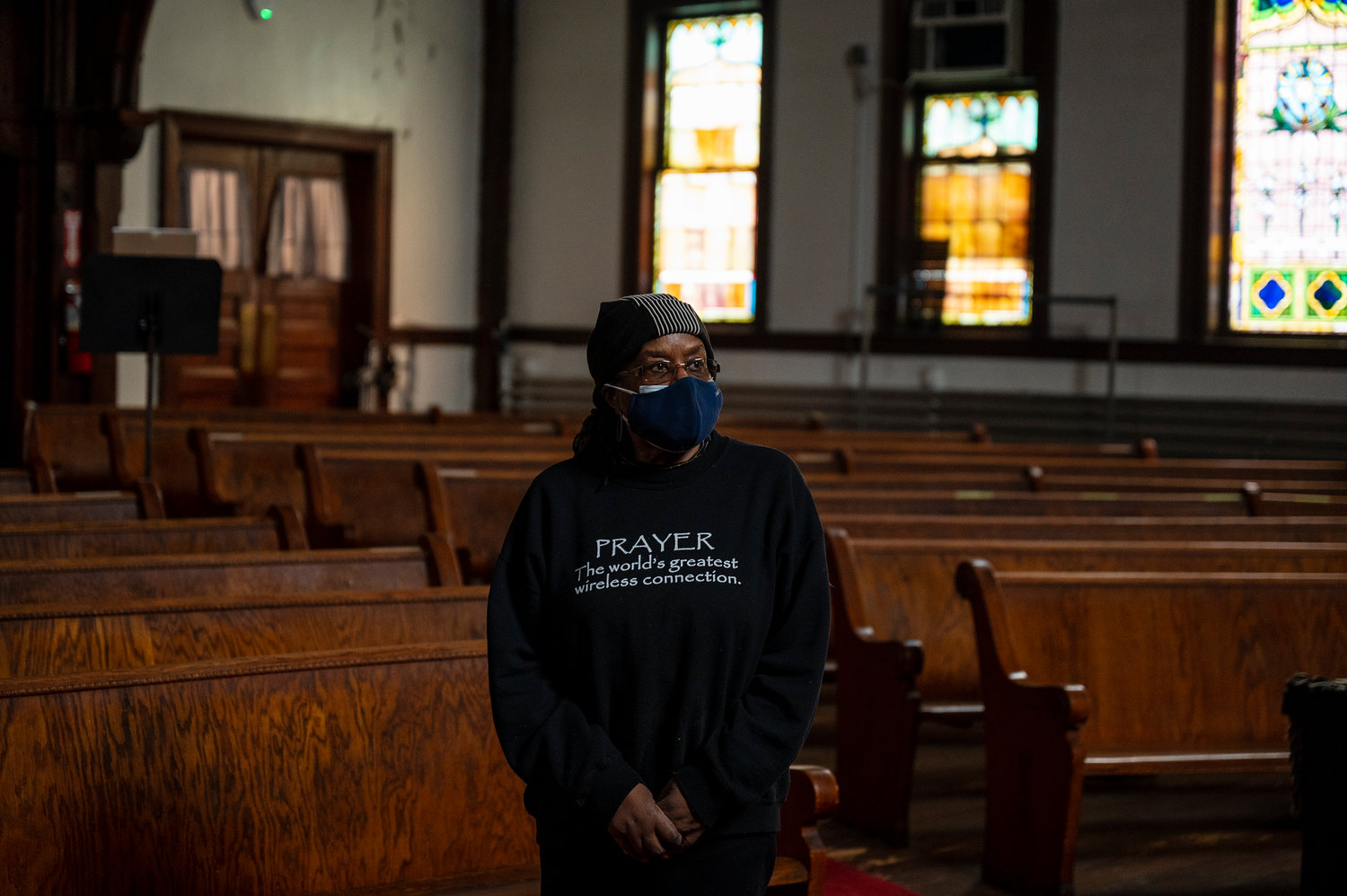 Dorothy Shepherd, who has been a member of St. Stephen’s United Methodist Church in Marble Hill for 30 years, would like to see much-needed repairs made with the building’s façade. But in order to do that, both the English and Spanish congregations must raise $50,000 just to begin work on the church’s bell tower, roof, walls, ceilings and floors.
Hiram Alejandro DurÃ¡n 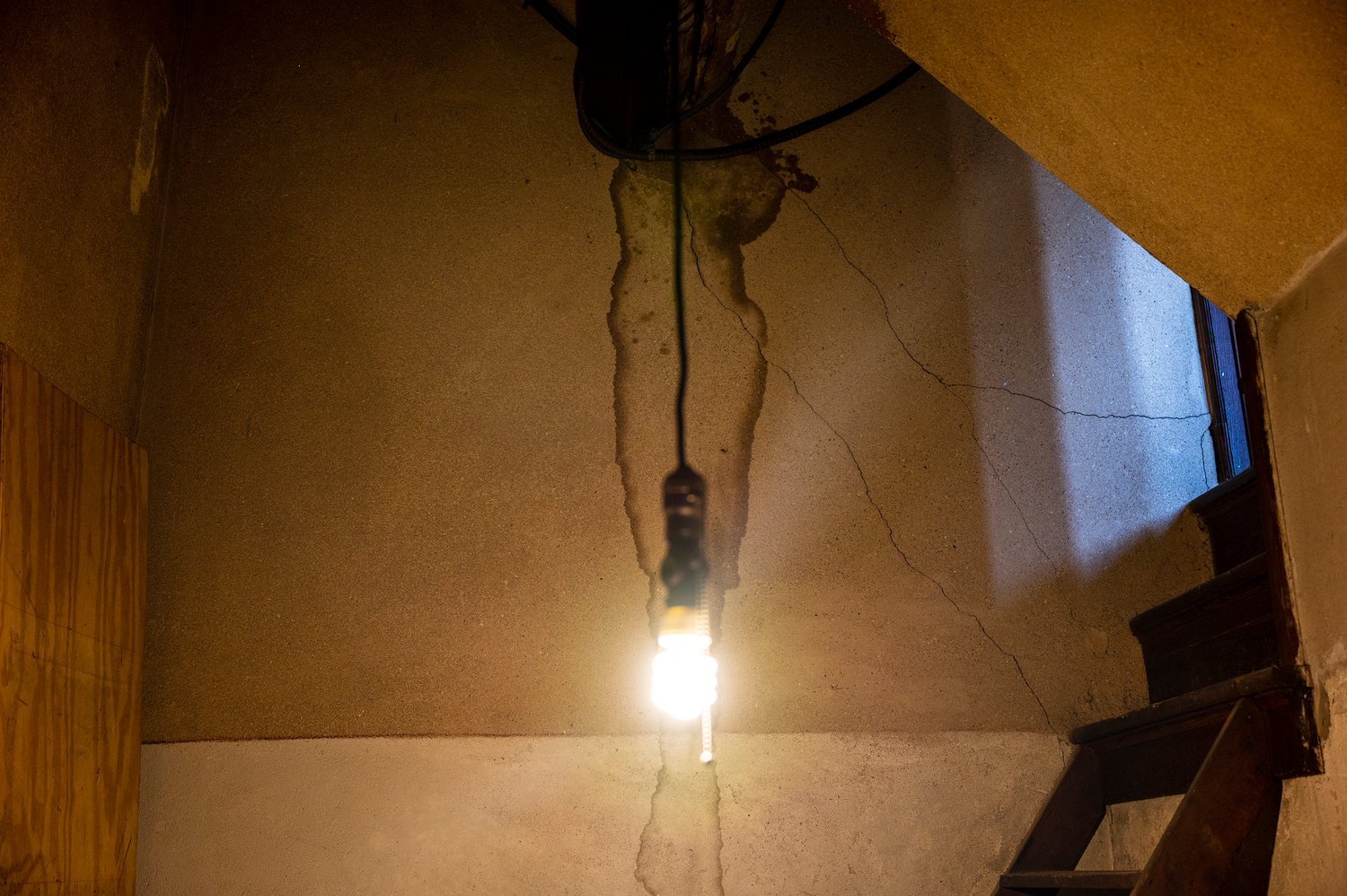 Much of the structure at St. Stephen’s United Methodist Church in Marble Hill has been damaged by rainwater from the remnants of storms like Hurricane Ida. Worship leaders hope to begin repairs this summer, but with a $50,000 price tag and a pandemic-induced membership decline, the West 228th Street community fixture already struggles to make ends meet.
Hiram Alejandro DurÃ¡n
Previous Next
Support journalism

When believers think of a place to worship, they likely imagine a beautiful, peaceful temple visitors can pray at and enjoy. For many who attend services at St. Stephen’s United Methodist Church in Marble Hill, that’s typically what they’d get.

However, the structure turns 125 this year, and it’s starting to show as congregants struggle through a pandemic and lower attendance at both English- and Spanish-language services to keep up.

But it wasn’t until the remnants of Hurricane Ida decimated the area back in September that the situation really became dire at the West 228th Street church.

“The money is an issue as far as getting the building fixed,” said Naomi Gonzalez, president of the church’s board of trustees, in Spanish. “We need money. We need funding.”

While repairs are needed everywhere, if Gonzalez had her way, however, all of that would start at the church’s bell tower — a centerpiece architectural feature of the building’s exterior that has been crumbling for nearly a decade. The wood, which holds the roof in place, is rotting and needs to be replaced.

If that weren’t enough, shingles are missing from the roof, making it difficult to keep rainwater from dripping inside. Once that happens, it’s almost impossible for anyone not to see how much the church’s roof struggles to keep the rain out.

The conditions have become so dangerous, in fact, church officials were forced to remove the bell from atop the tower. But it wasn’t the first thing to go from the tower.

In 2012, the very symbol of the church’s Christian faith — its cross — had to be pulled from the tower after the remnants of a different storm — Hurricane Sandy — pulverized the area.

Other needed repairs include floor work at the sanctuary entrance, as well as water damage repair on a number of different walls.

Not too long ago, the church kept up with such repairs by relying on its members. But the pandemic and overall declines in people heading out to church on Sundays have changed everything. And money is not flowing in anywhere as fast as water through the ceiling during a heavy storm.

In fact, the pandemic has cut off English-language worship services as well as Tuesday Bible studies classes since November 2020. Without that, it’s even harder for the church to fund the repairs because there’s no one around to pass a collection plate to.

Gonzalez, who has made the church her spiritual home for nearly five years, typically joins the Spanish-language congregation, which still meets several times throughout the week in the church’s lower level.

But the group is relatively small compared to its English-speaking counterpart.

“It’s a challenge, but I wanted to do it because I certainly don’t want the building to be closed (because of a) lack of money,” she said. “And I want the repairs to be done so that this sanctuary can be used again.”

Gonzalez hopes maybe some of the local electeds will catch wind of their plight and offer to help — especially considering what parishioners offer the community outside of its religious practices.

That includes the Marble Hill food pantry, an Alcoholics Anonymous program, and educational workshops covering a number of matters like nutrition and gardening.

The church also hosts flea markets, itself a resource for many who may need the extra money such an outlet presents, or simply access inexpensive items.

Gonzalez also has one other very special project.

“I would love to put up the bell again,” she said, so that I can hear this church on the hill ringing on Sunday mornings.”

It’s a sound many — like Dorothy Shepherd — could hear in the furthest parts of Marble Hill Houses. The finance chair for the English-language congregation, Shepherd still visits the church premises, helping in areas like the food pantry.

She’s been an active at St. Stephen’s for 30 years.

“The last time the building had any restoration, it cost the church half a million dollars,” Shepherd said. “That was acquired through donations and grants.”

The need for repairs isn’t anything new for Dorothy. In fact, that’s been almost as constant as God’s presence over the last two decades.

“We’ve had that roof repaired, fixed up and patched before at least four or five times,” Shepherd said.

The building was restored 10 years ago — partially, with only two sides completed. Now those non-renovated sides are deteriorating even more, thanks to regular water damage sustained over a number of years. 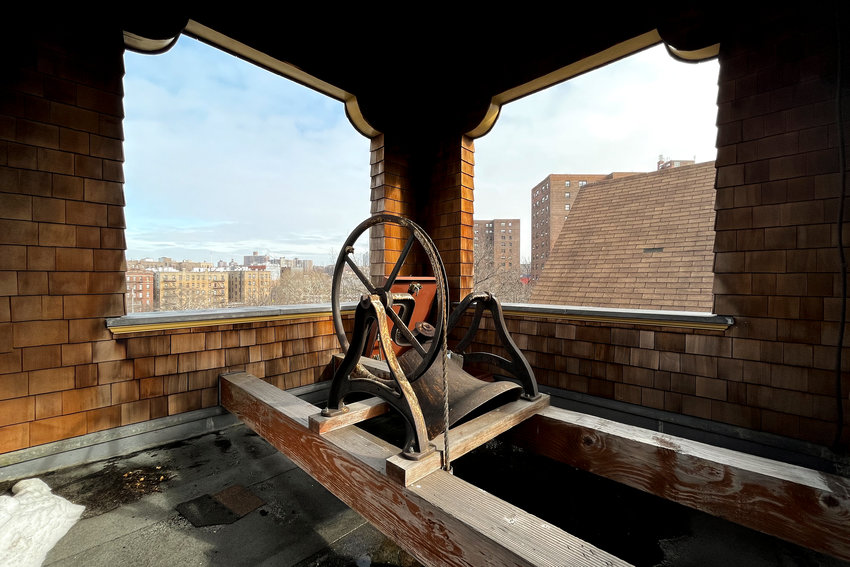 The bell at St. Stephen’s United Methodist Church has been contained with additional pieces of wood because of how much the structure of the tower …

“We’ve been looking for donations just to get the roof done,” Shepherd said. “We’re doing Phase I now, which is almost finished. The only thing they have to do now is put the skylight in the middle of the center.”

Shepherd hopes once repairs are complete, the church can welcome back its long-time members, and maybe even say hello to some new faces. And those new members are vital to keep St. Stephen’s going another 125 years.

“We lost a lot of members,” Shepherd said. “So many of them were elderly.”

With the Rev. Hermon Darden retiring in June, Shepherd hopes to see some of the repairs begin making it a less stressful transition for whoever the new minister will be. Either way, the new leader will need to be able to take on the mantle of nourishing the church both spiritually, and when it comes to structural damage, quite physically.

“We need somebody young, approachable, and vibrant just to help get the community together,” Shepherd said.

Despite the church’s woes over the past decade, Shepherd says congregants still have a lot to be grateful for during these difficult times.

“After 125 years, God has been good to St. Stephen’s,” Shepherd said. “And it’s a beautiful building.”

CORRECTION: St. Stephen’s United Methodist Church in Marble Hill seeks to raise $50,000 for its food pantry, but has not said how much it would need for overall repairs and upkeep for its West 228th Street location. A story in the Feb. 10 edition, provided an incorrect amount for needed funds.