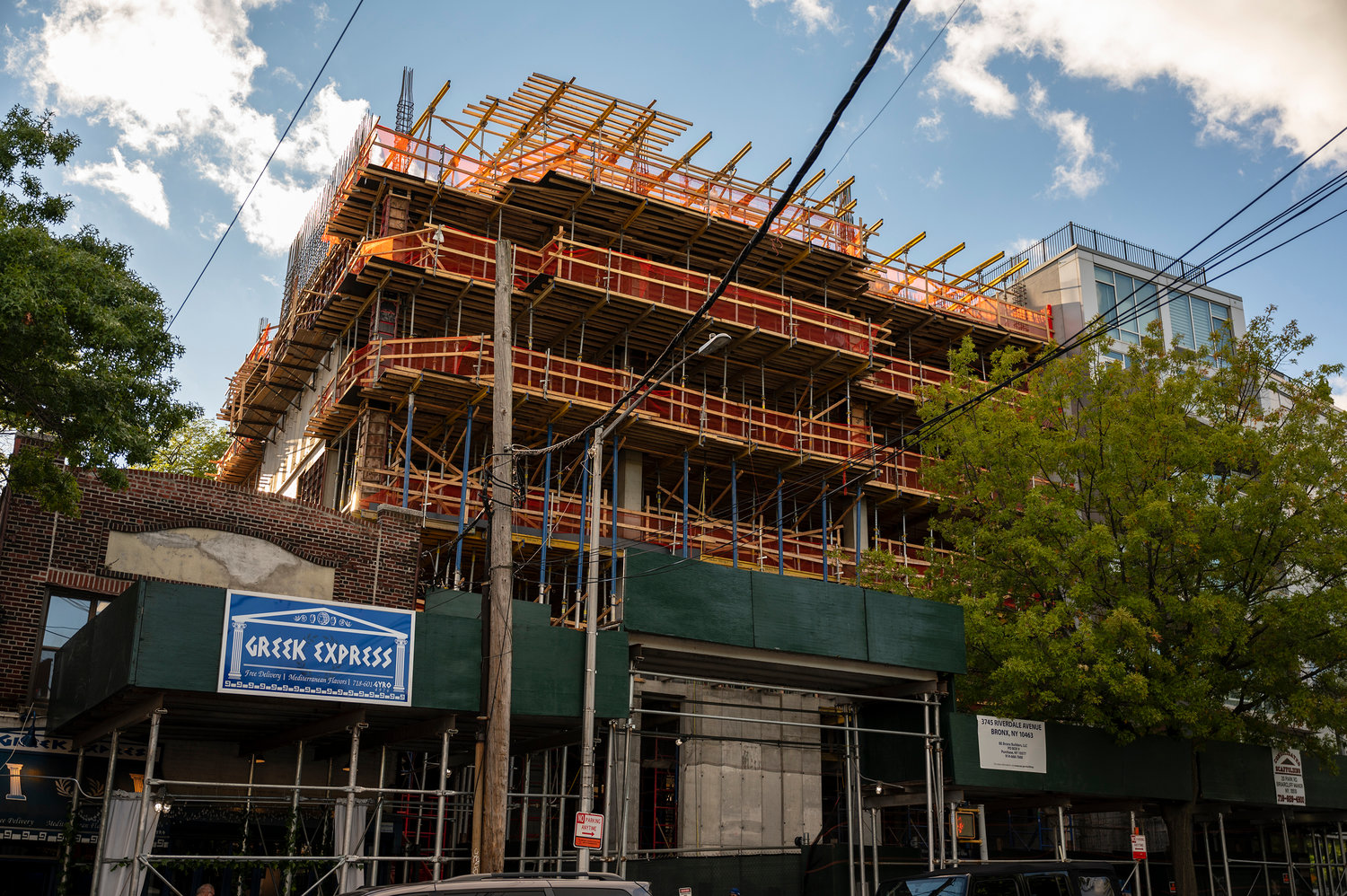 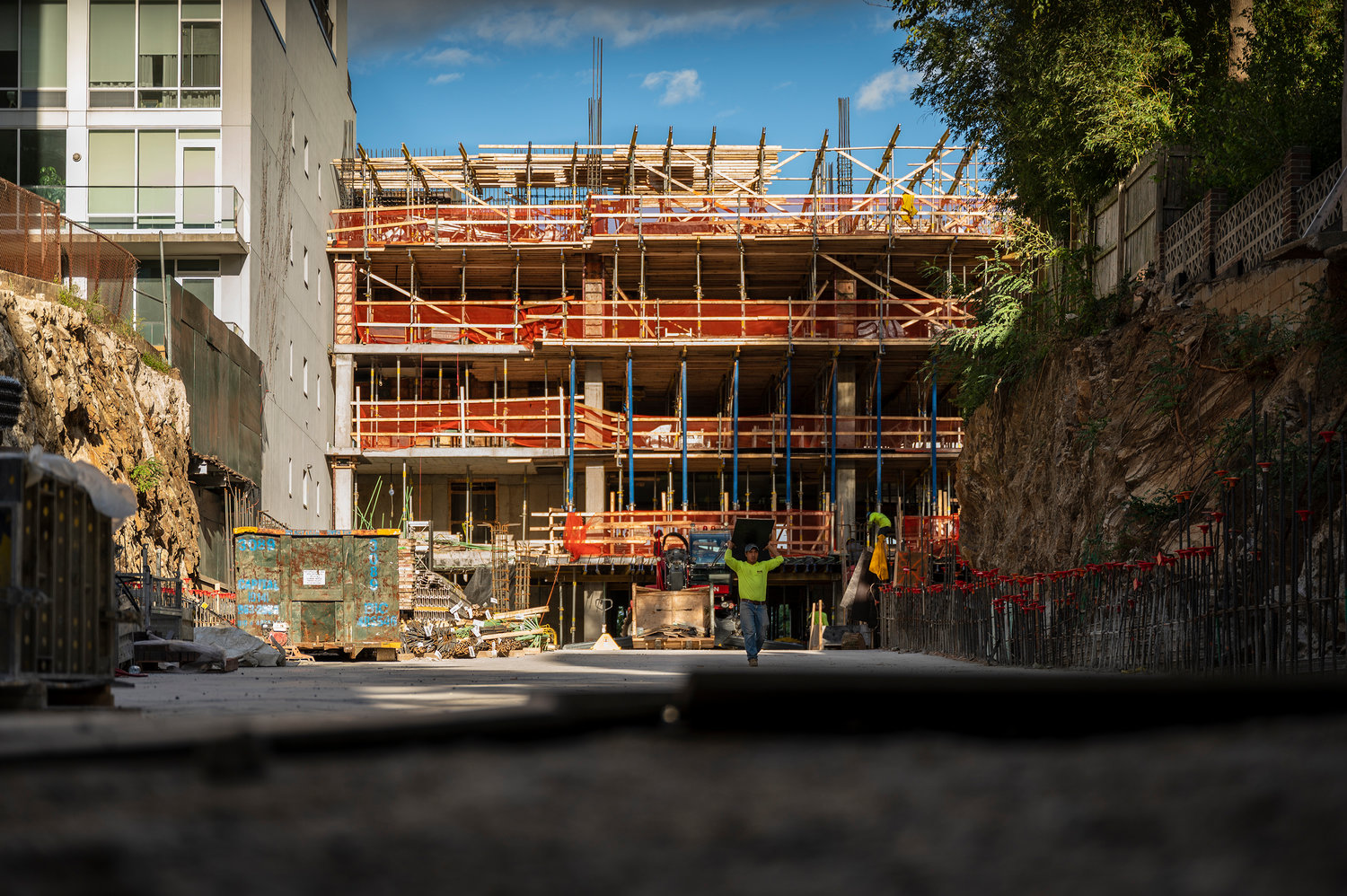 Workers drilled deep into the bedrock at the rear of the Stagg property at 3745 Riverdale Ave. to excavate an area for a driveway, providing access to the new building from Oxford Avenue.
Hiram Alejandro Durán
Previous Next
Support journalism

Inspectors conducted a sweep of the property Oct. 3 after neighbors at 3640 Oxford Ave complained about the dangerous cliff now abutting their yard. Workers have excavated about two stories of dirt and bedrock to carve out a driveway at the rear of the property.

Work is now ordered to come to partial halt until Stagg’s team repairs the masonry and fencing as required in the city’s building code. Inspectors also cited the property for failing to display required documents on site.

A rendering posted on construction fence depicts a 14-story mixed-use apartment building, though Stagg may seek to build it higher. The city issued permits for work to begin earlier this year and appears to be keeping close tabs on the site.

Progress on the new building came under scrutiny in April when the buildings department ordered construction to grind to a halt, citing safety violations and later launching a construction safety enforcement audit. The order was rescinded in May, allowing work to resume.

Stagg was also fined for failing to notify the city when a worker fell this summer and was taken to the hospital for a twisted knee.

The troubled site is a “jewel in the Riverdale crown,” said Community Board 8 land use committee chair Charles Moerdler. Montefiore Medical Center previously planned to build a medical office at the property, but abandoned their plans and handed it over to Stagg early this year.

Moerdler said the city is asking the developer to provide extra protection for the abutting properties at an added expense. “They’ve been back and forth on how to deal with it,” Moerdler said.

He convened a CB8 land use subcommittee to monitor the project and communicate with residents at the adjacent properties, which includes mixed-use buildings on Riverdale Avenue and a 12-story condominium building at 3660 Oxford Ave. in addition to several two- and three-story buildings on Tulfan Terrace.

The committee passed a resolution Tuesday to give their authorization for Stagg to expand work hours on Saturday. He’s asking for concrete work to begin at 9 a.m. instead of 10 a.m. on Saturdays.

Land use committee member Martin Wolpoff reported that the variance “will help them finish their construction earlier.”

“They hope to be out much sooner in the long run,” Wolpoff added.

Mark Gothelf, the head of the condo association at 3660 Oxford Ave. said the majority of the association members have agreed to the earlier start on Saturday. The condominium complex is currently undertaking some work of its own.

“The construction work on Saturdays doesn’t really cause a great deal of noise, while other stuff during the week does,” Gothelf said. As for t”he concrete work on Saturday – we don’t have an objection to starting earlier if that helps them to finish sooner.”