Storm of outcries brought to CB8 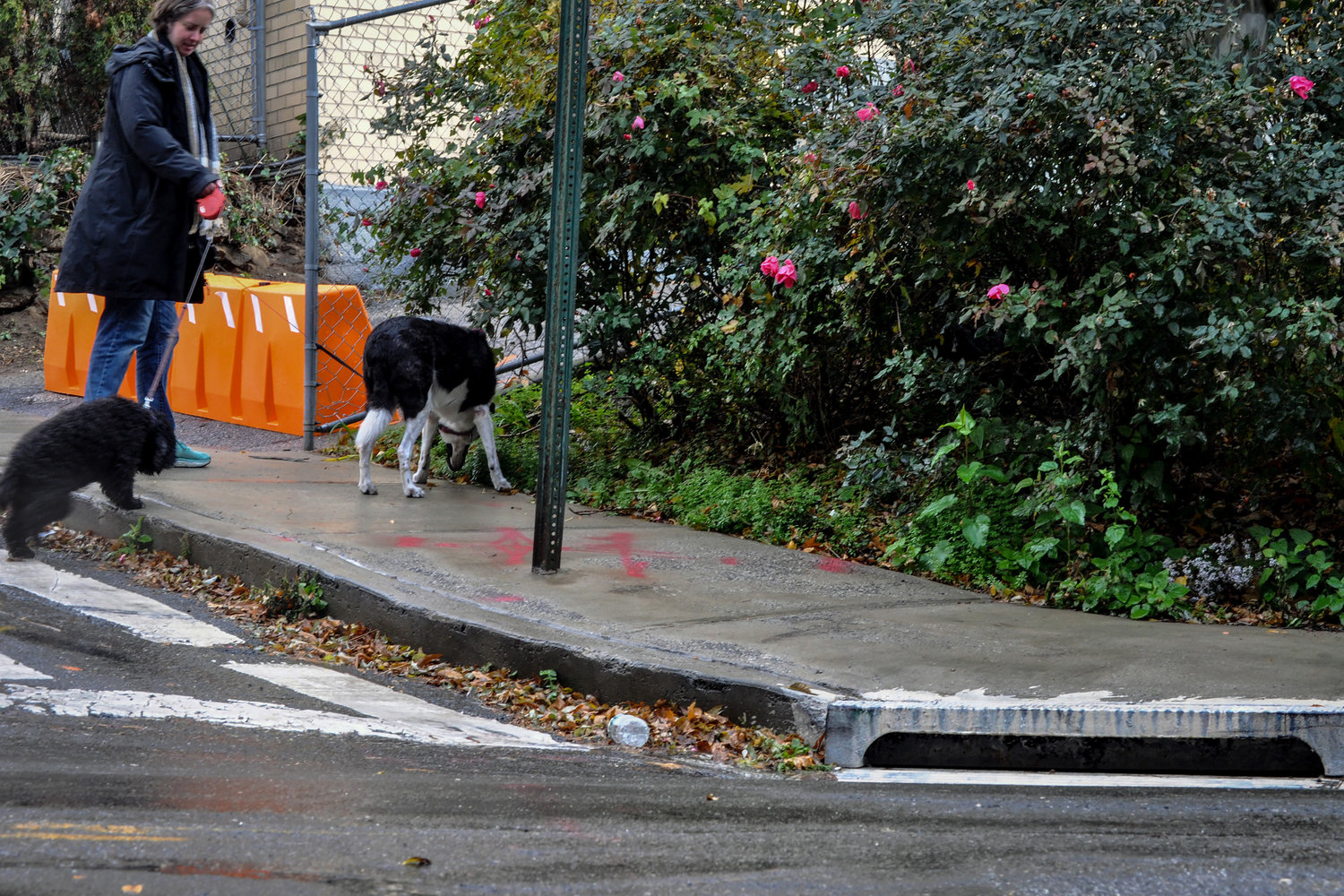 The furor around a Spuyten Duyvil intersection known for its flooded streets and inadequate drainage first arose last November. On rainy days, some locals might see their building lobbies and even living spaces near Kappock Street and Palisade Avenue fill with water.
SARAH BELLE LIN 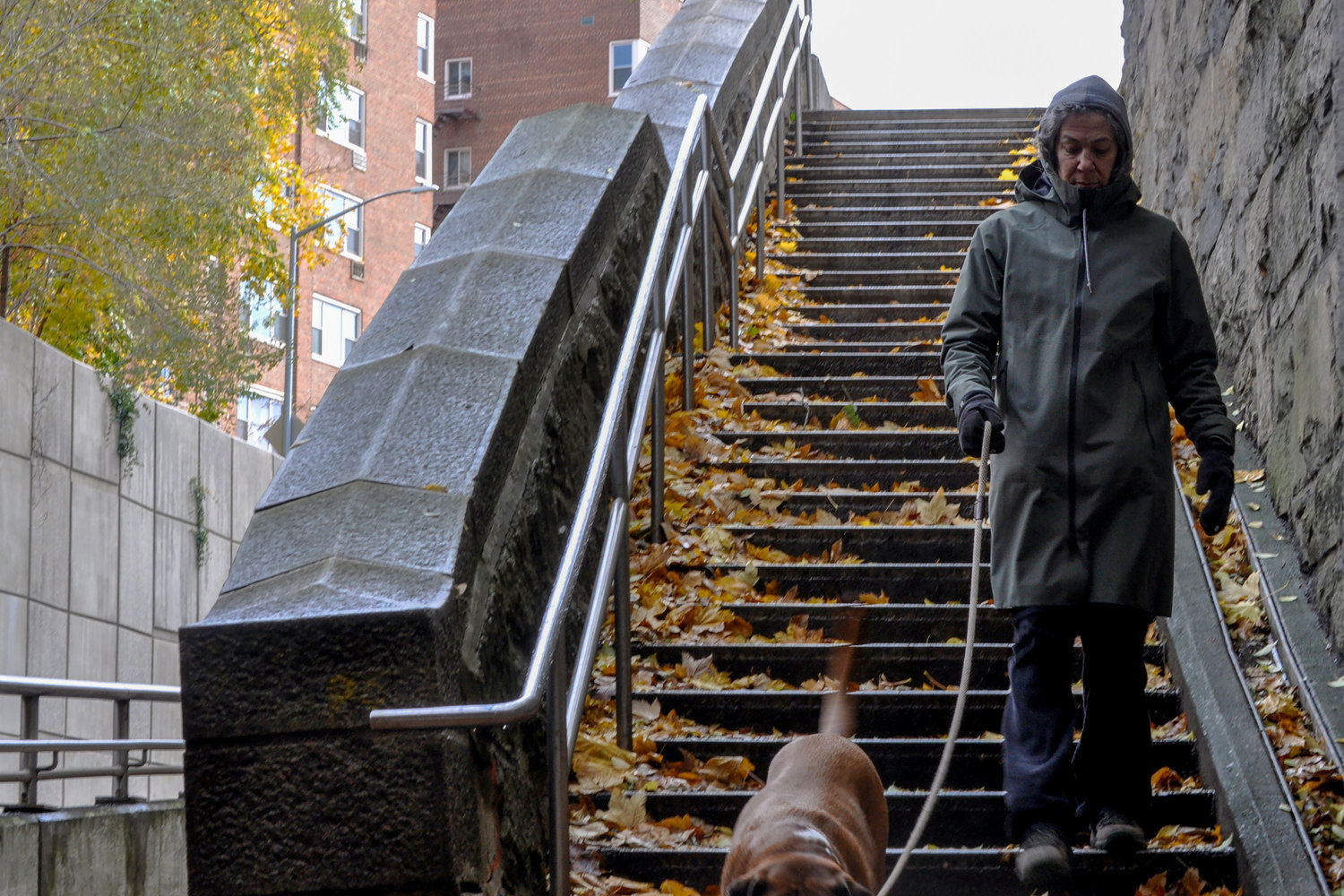 Worried community board members and locals fret over how the city’s transportation department will address flooding issues at the Kappock Street and Palisade Avenue intersection — something that has concerned them for months now.
SARAH BELLE LIN
Previous Next
By SARAH BELLE LIN

The furor continues, and it’s been a long time coming. And yet, when the city’s transportation department was called to task, the agency was nowhere to be found.

At least that’s what Deb Travis claims happened during a recent Community Board 8 traffic and transportation committee meeting she led discussing the Kappock Street and Palisade Avenue intersection, caught in the middle of a squabble among CB8, neighbors, and of course, the storm water.

It’s an intersection that, for some, truly personifies how heavy it pours when it rains. Except where it pours is into people’s homes. Several dozen people showed up virtually for last month’s meeting to talk about flooding. But no DOT. The agency’s deputy commissioner, Margaret Forgione, wrote to CB8 ahead of the meeting sharing her agency’s “plans of revisiting the intersection” before passing on renderings of the intersection “with all of its mysteries,” as Travis shared jokingly at a recent traffic committee meeting.

“So that was exciting,” Travis said, inviting DOT to join them at a meeting a few days later. Yet, no DOT. Travis even gave the agency the benefit of doubt, saying that maybe there just wasn’t enough time between Forgione’s communication with the committee and its meeting, which did transpire in less than a week.

“Regardless, they weren’t able to come,” she said.

So where was DOT? An agency spokesperson told The Riverdale Press it was simply a matter of scheduling conflicts. But there is an effort to ensure at least someone from the transportation department is at next month’s committee meeting to listen to concerns.

Still, Forgione has not been light on details, explaining DOT believes removing a substantial amount of concrete from the intersection could make a difference.

DOT also plans to include some plantings, likely through vegetated depressions known as bioswales that could help improve water flow. Porous slabs would be placed in the roadway adjacent to the concrete extensions “which will also absorb additional water flow.” Wave features, or small rubber speed bumps, were also discussed as one way to ensure calmer “turns” of water flow.

As for 2727 Palisade Ave., a co-op that has borne the brunt of recent flooding? Perhaps Con Edison could work with CB8 to raise the curb out front, the transportation department suggests. Flooding there this past fall was not blamed on storms like the remnants of

Hurricane Ida, but instead by many who live there on DOT’s decision to replace culverts with sidewalk slabs of concrete.

One neighbor, Mary Serri, said her traffic committee working group received a draft proposal from DOT showing what changes it would make. But it’s not what Serri or her group was looking for, asking Travis to have her overall committee reject the proposal.

A particular area of concern is a concrete funnel Serri believes will continue channeling storm water to 2727 Palisade if it’s allowed to remain. Because of the lack of a clear path to existing storm drains on the north and south corners of Palisade, the group is worried water is not being channeled away from the street’s high points.

“That’s a very critical point for us,” Serri said.

But why not build a traffic island instead “that could stop the flooding problem caused by the concrete funnel,” Serri said, while adding a safe pedestrian crossing. The ultimate benefit would be eliminating 2727 Palisade from being flooded in the future.

One of the co-op’s owners, Miguel Hummel, said he wasn’t sure reducing the concrete slabs by an extra four feet will make that much of a difference. He wondered whether it was possible for the transportation department to reduce the right side of the sidewalk and maybe replace it with painted extensions to prevent cars from turning into it.

“The proposal does nothing in its attempt to appease us without offering solutions,” Hummel said.

“That’s why I want DOT to come,” Travis said, “so we can actually ask them these questions.”

Mary Ellen Gibbs used to live on Palisade herself when she was a child. She’s a bit surprised how much the infrastructure itself has changed.

“I remember where the sidewalks were and the greenery,” Gibbs said. “The last time there was a heavy rain, they were so close to being flooded again — even when there were sandbags. I strongly suggest they return it back to its original so people don’t keep being flooded. They shouldn’t have to worry about swimming in their living rooms.”

Paul Thaler, who lives at nearby 750 Kappock, was frustrated with the lack of communication over the past year.

“While there’s immediate concern having to do with water flow to 2727 (Palisade), there are sandbags lining the sidewalk reminiscent of Sandy,” Thaler said, referring to the 2012 storm. “When I take a look at this diagram, it seems some of it is a Band-Aid over a much larger problem that exists. This project was done pretty much in the dead of night, over community opposition.”

Travis jumped in to defend the transportation department at one point, but even she had to admit there was a lack of communication between the DOT and the city’s environmental protection department — something that has “now come back to haunt them.” Now, Travis is curious herself on whether the environmental agency consulted on the project at all.

DOT is expected to show up Thursday for the committee’s December meeting. And, as Travis points out, there is a much for them to address.

“Apparently, there is actually a long list of things the DOT said they’re doing (that) is not on this drawing,” she said. “So its perplexing how it’s going to work. So it’s vital they’ll be here in December.”

For now, neighbors have no choice but to funnel their screams into the ether. Says Travis: “So here’s to hoping they come.”