Street renamed for beloved cultural icon of the Bronx 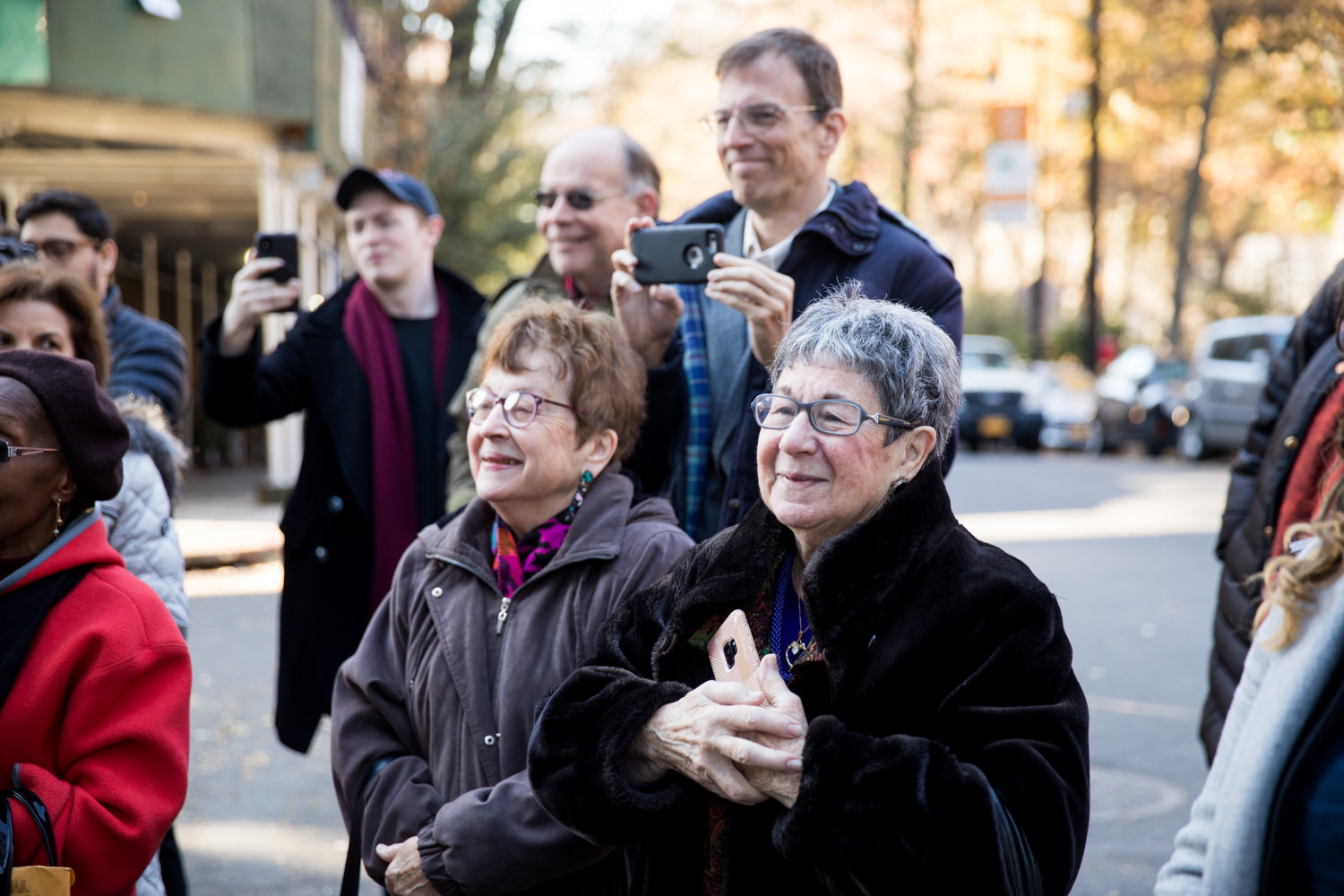 Marsha Heller, right, Louise Scribner and Andrew Scribner, center, attend a street co-naming ceremony for William J. Scribner Way on the corner of Hillman Avenue and Van Cortlandt Park South. Louise, William Scribner's first wife, and Marsha, his second, saw the ceremony as a fitting culmination of his legacy, which included his founding of the Bronx Arts Ensemble, which is headquartered nearby.
JULIUS CONSTANTINE MOTAL 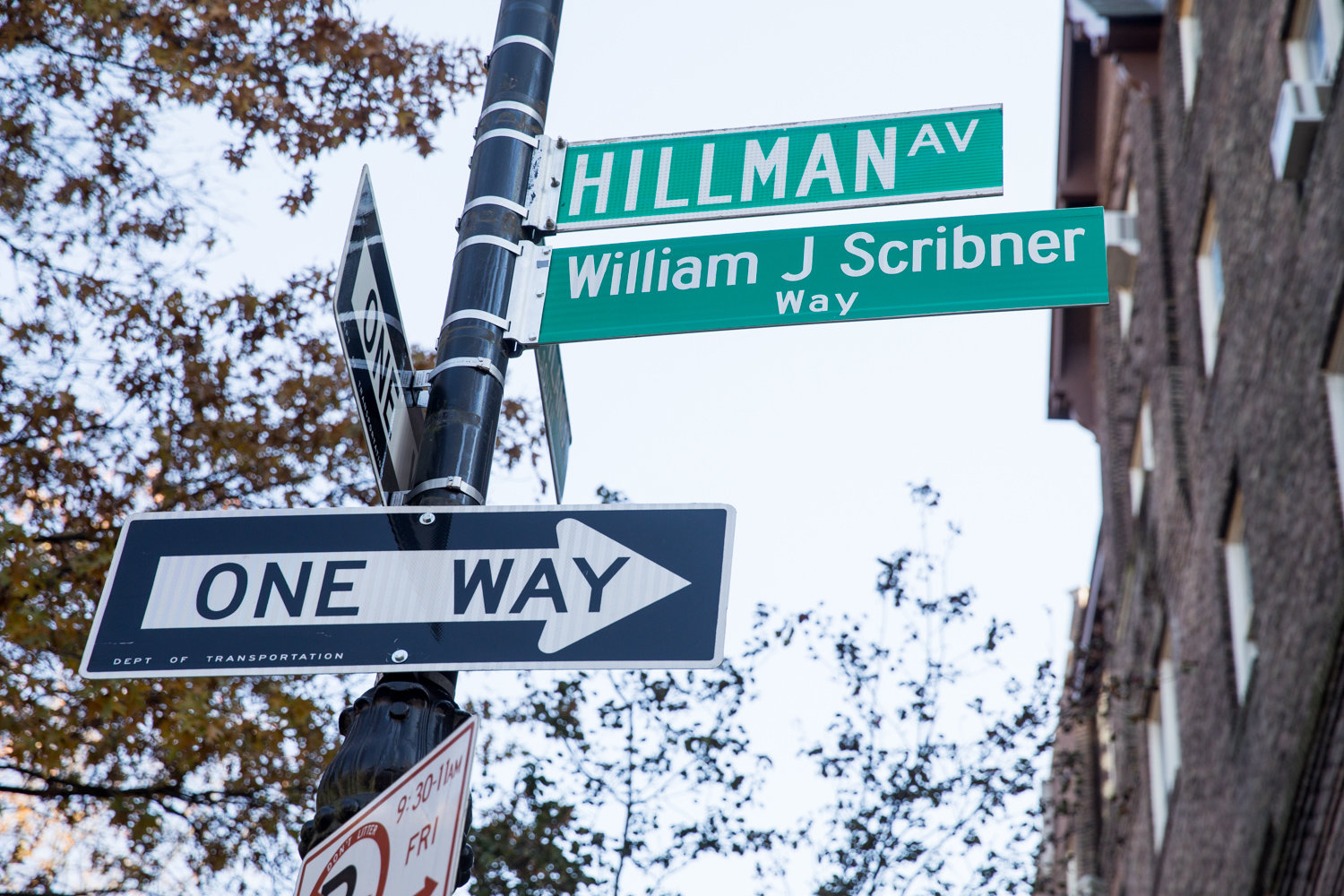 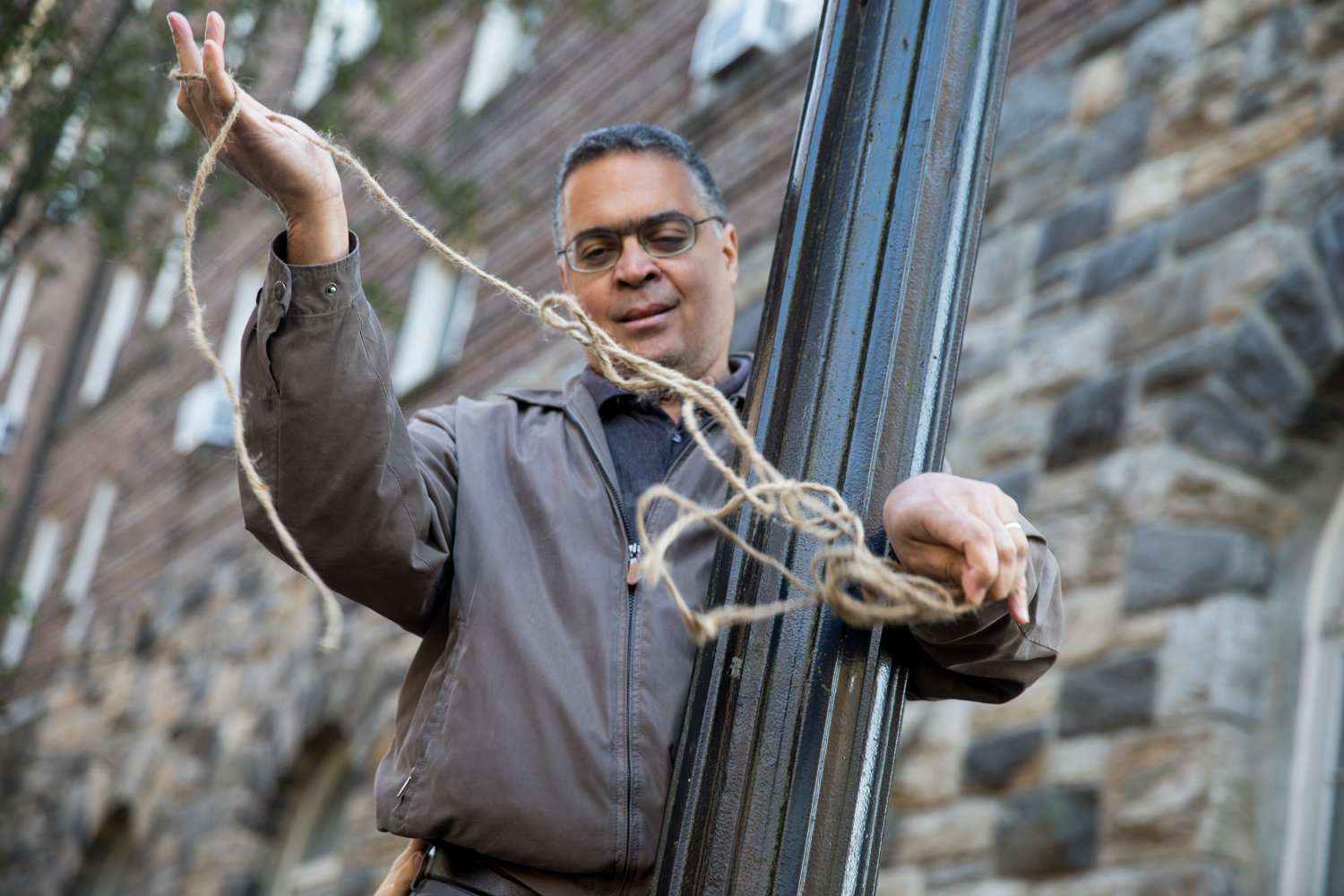 Bronx Arts Ensemble member Gil Dejean unfurls the string attached to the sheath covering the ceremonial street sign for William J. Scribner Way on the corner of Hillman Avenue and Van Cortlandt Park South. The street was co-named for the late founder of the Bronx Arts Ensemble.
JULIUS CONSTANTINE MOTAL 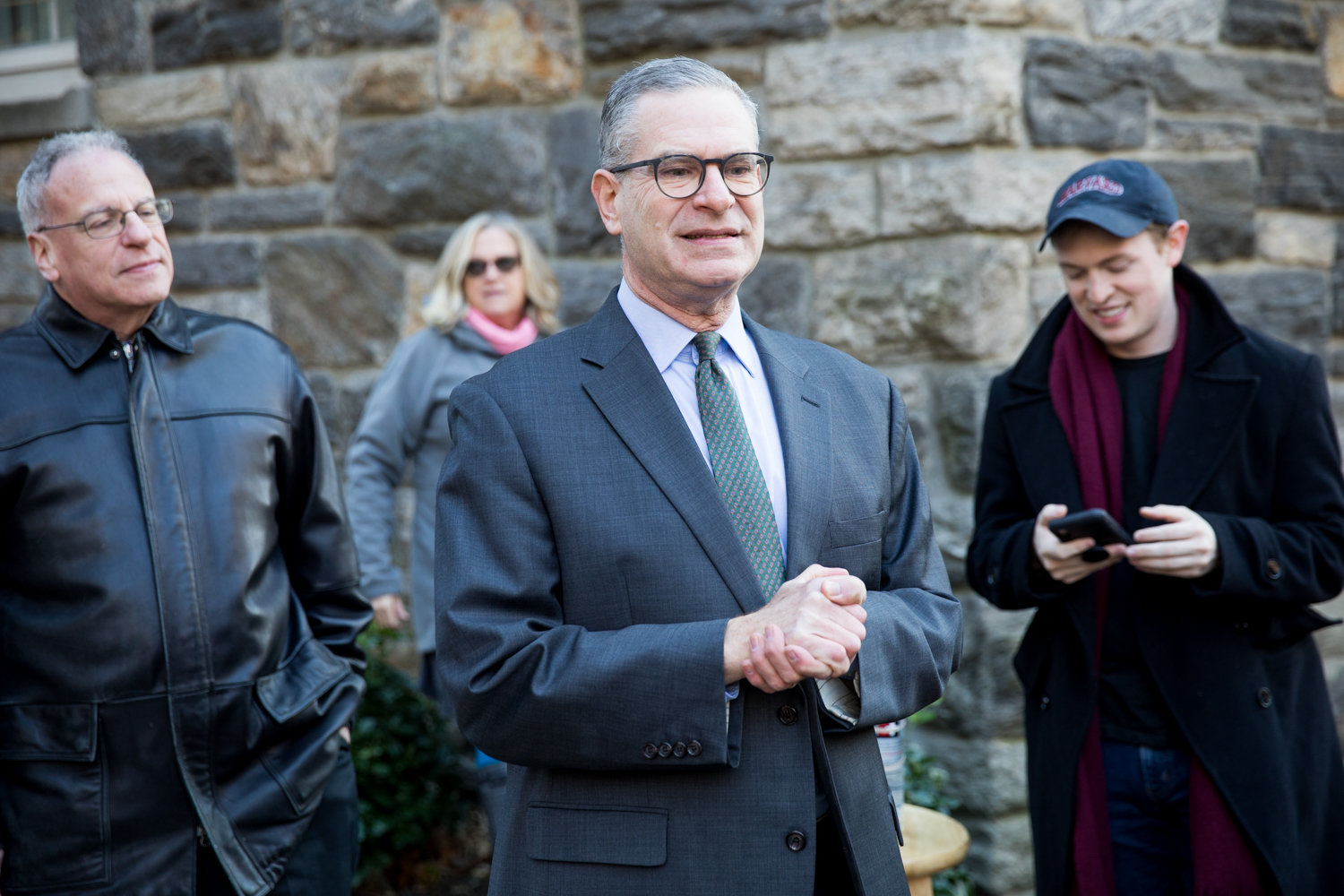 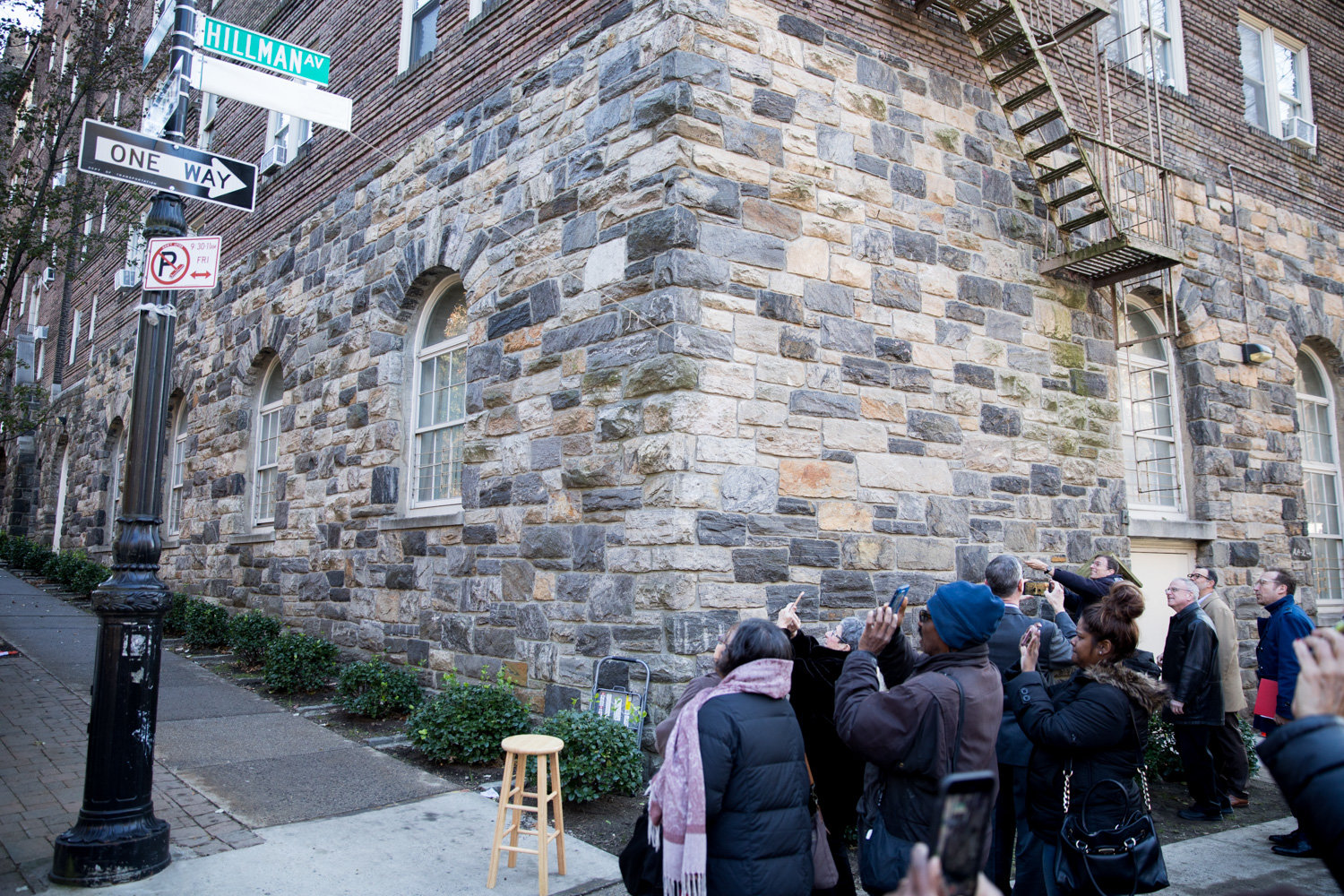 Andrew Scribner pulls the sheath of the street sign at the corner of Hillman Avenue and Van Cortlandt Park South named in honor of his father, William J. Scribner, who founded the Bronx Arts Ensemble.
JULIUS CONSTANTINE MOTAL 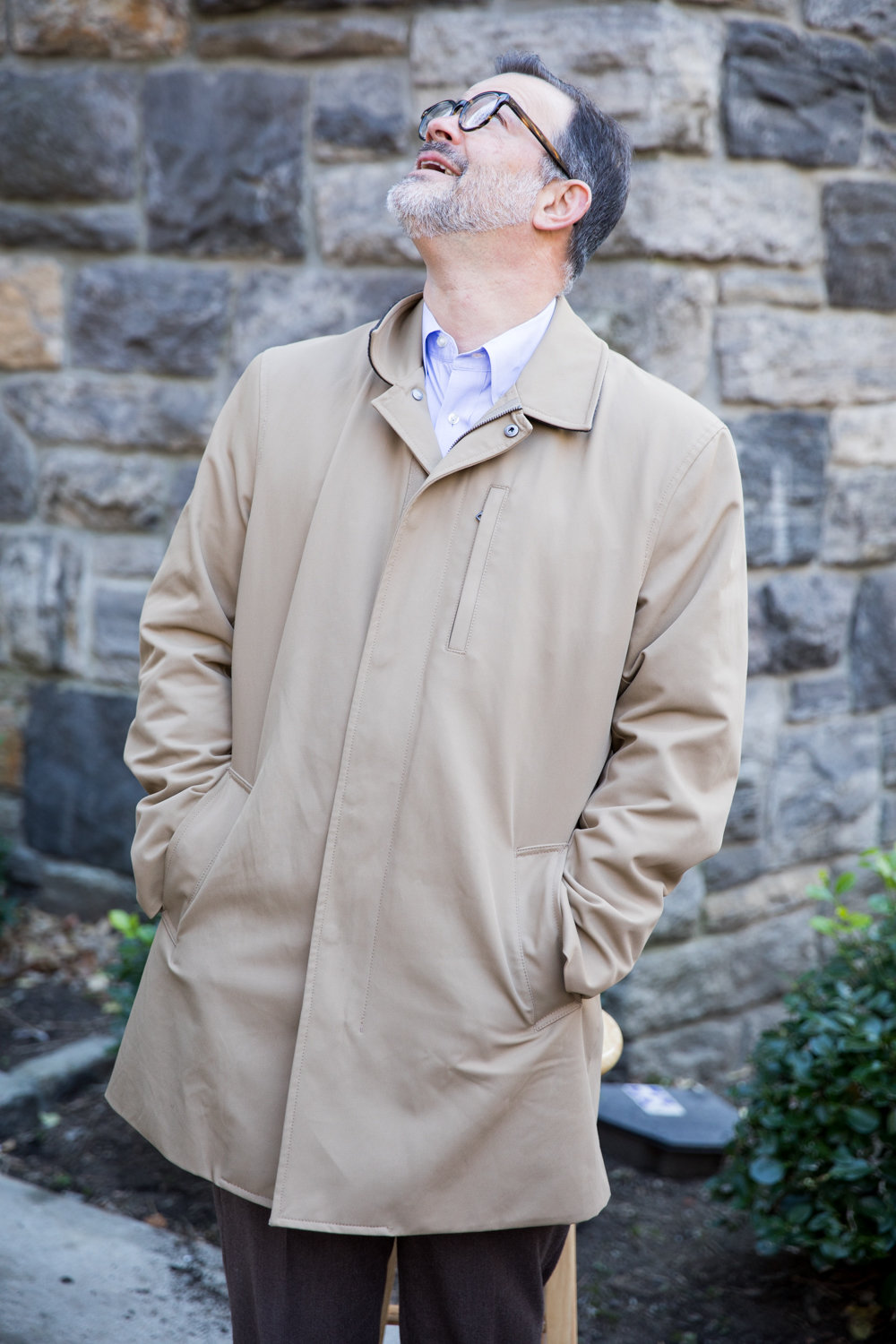 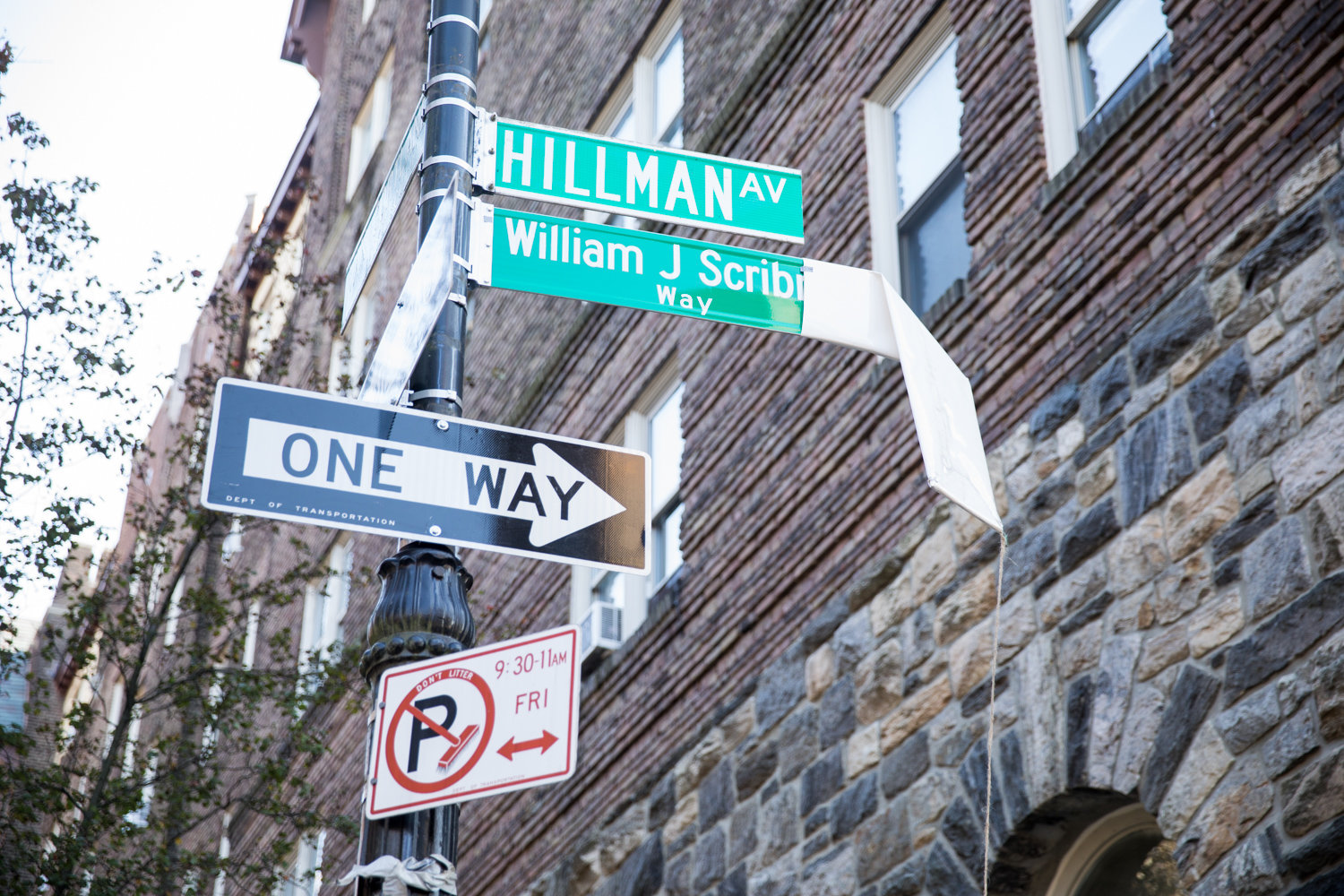 The sign for William J. Scribner Way is unveiled during a Nov. 15 ceremony. The corner of Hillman Avenue and Van Cortlandt Park South is named for the late founder of the Bronx Arts Ensemble, which is headquartered nearby.
JULIUS CONSTANTINE MOTAL 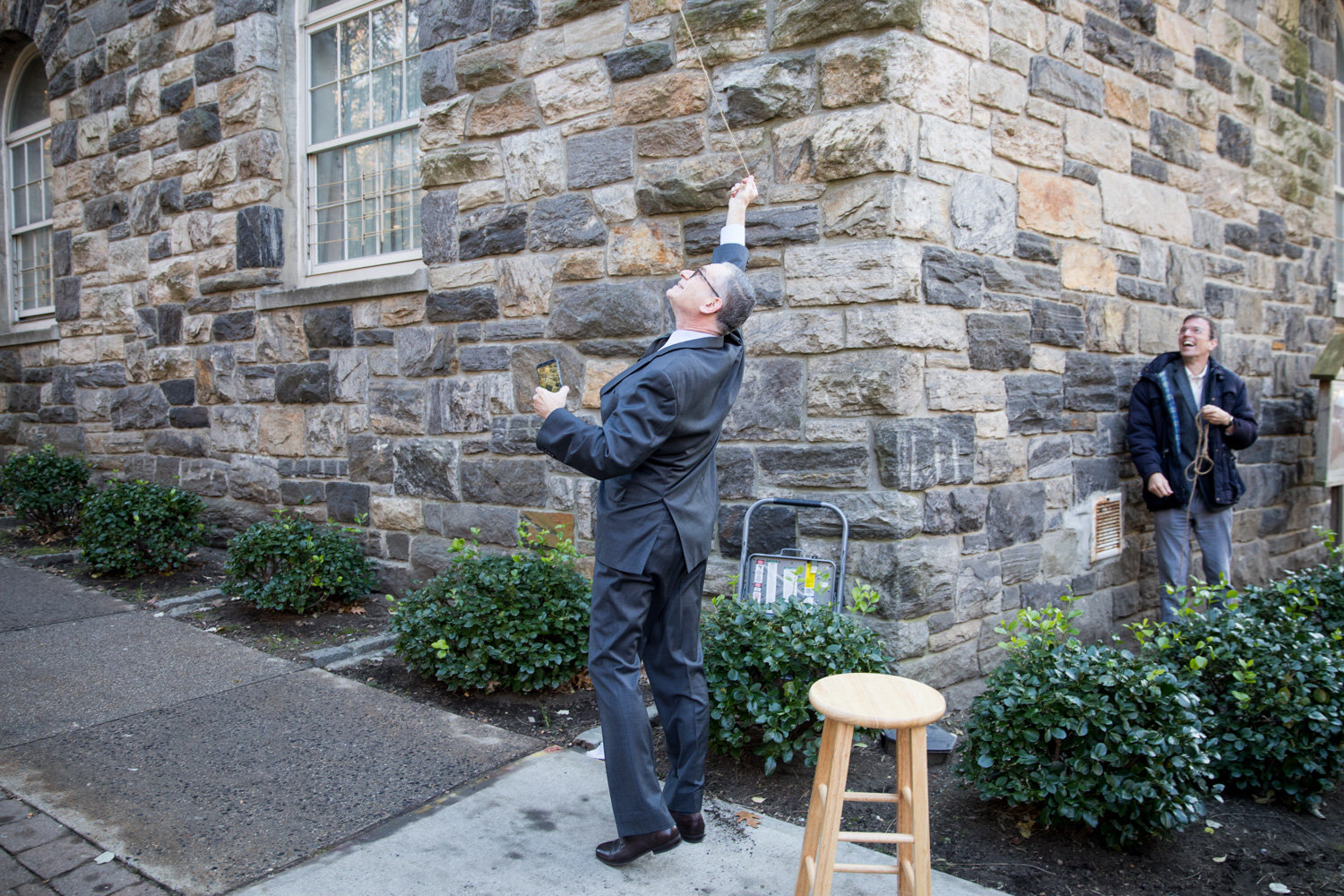 Bronx Arts Ensemble executive director David Nussenbaum gives the string one last tug to fully unveil the sign for William J. Scribner Way. Scribner was the founder of the arts ensemble, which is headquartered near the corner of this intersection of Hillman Avenue and Van Cortlandt Park South.
JULIUS CONSTANTINE MOTAL
Previous Next
By RAPHAEL LASSAUZE

The eyes of the shivering audience in the late autumn chill near Van Cortlandt Park South were fixed on the sign for Hillman Avenue — or rather, on the white plastic rectangle beneath it, and the brown twine leading away. The crowd was waiting for what was hidden behind the white plastic — the new ceremonial name for this particular corner, “William J. Scribner Way,” after the late founder of the Bronx Arts Ensemble.

This was a particularly special day for David Nussenbaum, executive director of the arts ensemble, whose headquarters were nearby. “They don’t name streets after just anybody.”

And Scribner wasn’t just anybody. He founded the Bronx Arts Ensemble in 1972 after realizing the lack of classical music in the Bronx. He brought free, public concerts all around the borough, but especially at Vladeck Hall at Amalgamated Houses, a place of culture and arts, the entrance of which now lies on Hillman Avenue’s William J. Scribner Way.

Scribner was a principle bassoonist for the American Symphony Orchestra, the Long Island Philharmonic, and the Brooklyn Philharmonic, among others. His dedication to music and the community at large are among the many reasons people asked for his memory to be preserved.

Among those in attendance was professional bassoonist Gil Dejean. He gestured to the signpost, and the river of people approaching it from the auditorium doors of Vladeck Hall.

“This is to honor Bill’s memory,” Dejean said. “And we should.”

A colleague of Scribner’s for decades, Dejean has been a part of the ensemble for close to 40 years. He saw in real time the changes brought about simply by bringing music and music education to an area often described as “burning” in the ‘80s. Scribner’s dedication to the cultural improvement of the Bronx has left its mark on the borough, Dejean said, forging long-lasting relations with 40 public schools as well as a residency at Fordham University that’s lasted decades.

Memorializing and honoring Scribner was a priority following his death in 2016.

“It was more or less his conception,” Dejean said. “Bill brought arts back to the borough. He helped save it.”

Streets in the city are typically co-named after prominent community figures two years after they die. But it can be a lengthy process, usually requiring a stamp of approval from the community board, leading to a city council vote. It’s a process that has to start almost right away.

“Shortly after Bill’s death, we were committed to co-naming the street after him,” Nussenbaum said. “So many people came forward to show their support. It took a few years, but we knew it was important.”

And it wouldn’t have happened without the actions and appeals of Assemblyman Jeffrey Dinowitz and Councilman Andrew Cohen, Nussenbaum said, who stood on the curb that morning shaking hands with those waiting.

Scribner’s first wife, Louise Scribner, stood in anticipation by the street post alongside her son Andrew. Both had driven up from North Carolina to see the Scribner name etched into the geography of the area he cared for so deeply.

At noon, a stepladder from Vladeck Hall’s auditorium was brought out to the signpost. After a well-meaning folly by Cohen, involving a stumble on the stepladder, and Dejean’s heroic detaching of the rope, the crowd took photos and laughed.

“Bill would have found this funny,” said Marsha Heller, Scribner’s second wife, who recorded the antics on her smartphone.

With all ready, Nussenbaum stood before the post and thanked everyone for coming, describing the necessity to remember someone like Scribner.

“He loved music, education and the Bronx,” Nussenbaum said. “I didn’t know him well, but I know I learned from him.”

Cohen spoke up as well, greeting the crowd and thanking both the participants and teachers connected with the ensemble, as well as Scribner himself.

“They’re very meaningful, these name additions,” Cohen said. “They are a modest honor that will remain a part of the community for a long time.”

Dinowitz took Cohen’s place before the crowd, seeking to encapsulate how Scribner managed to rejuvenate a borough that is rarely considered when the word “Manhattan” is brought up in conversations on culture.

“What Bill did was bring art and culture back here,” Dinowitz said. “He made it so that you can stay here to listen to beautiful music, no need for going to that island down there.”

Robert Fanuzzi, the chair of the Bronx Arts Ensemble, thanked the Scribner family and expressed joy at the turnout for an artist.

“Bill started something historic,” Fanuzzi said. “He helped to renew our beautiful Bronx.”

With the speeches complete, the two Andrews — Cohen and Scribner — pulled the wrapping from the sign, unveiling William J. Scribner Way. The crowd cheered and clapped, taking photos and talking with one another about Scribner, about the speeches, and about how the area is officially changed.