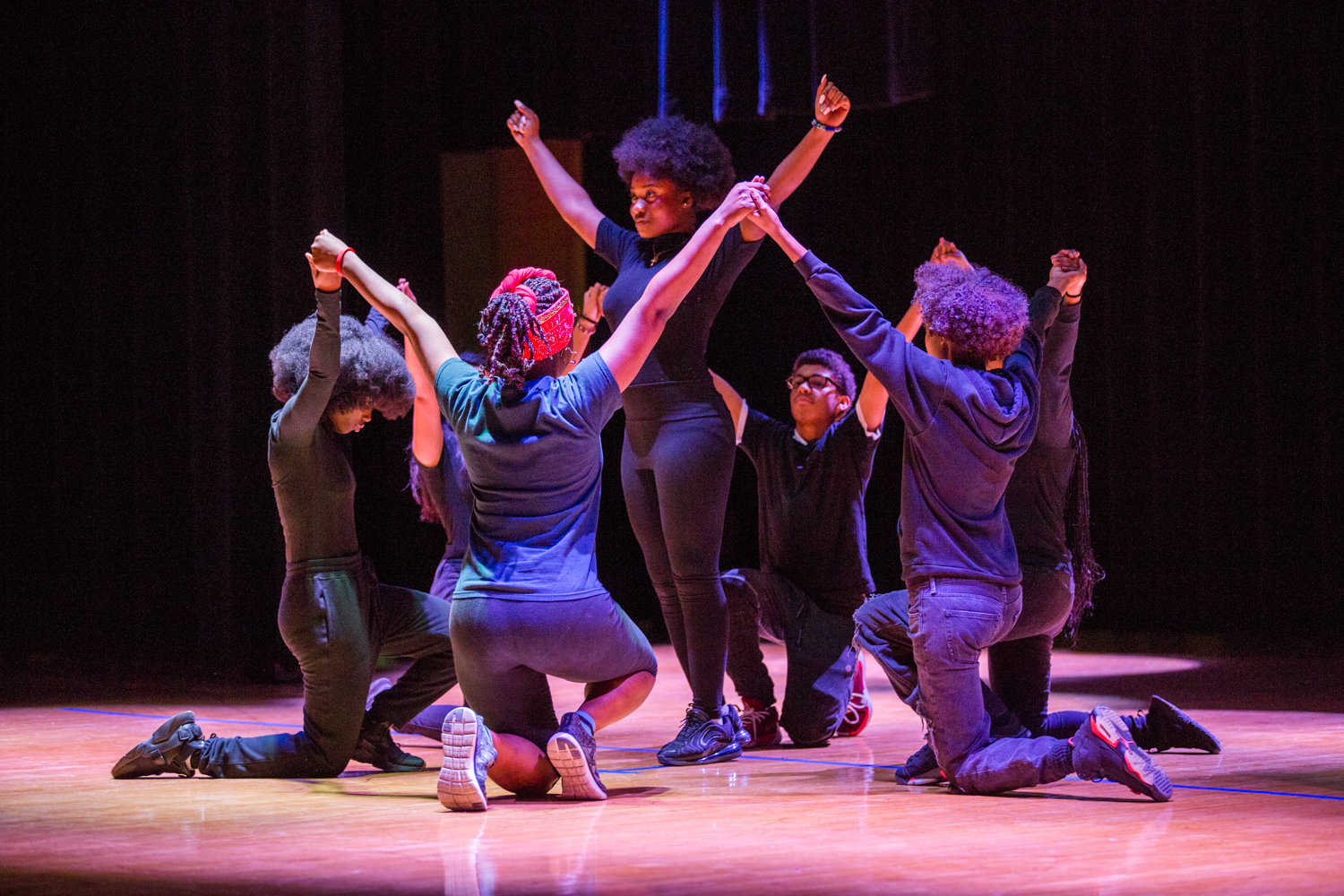 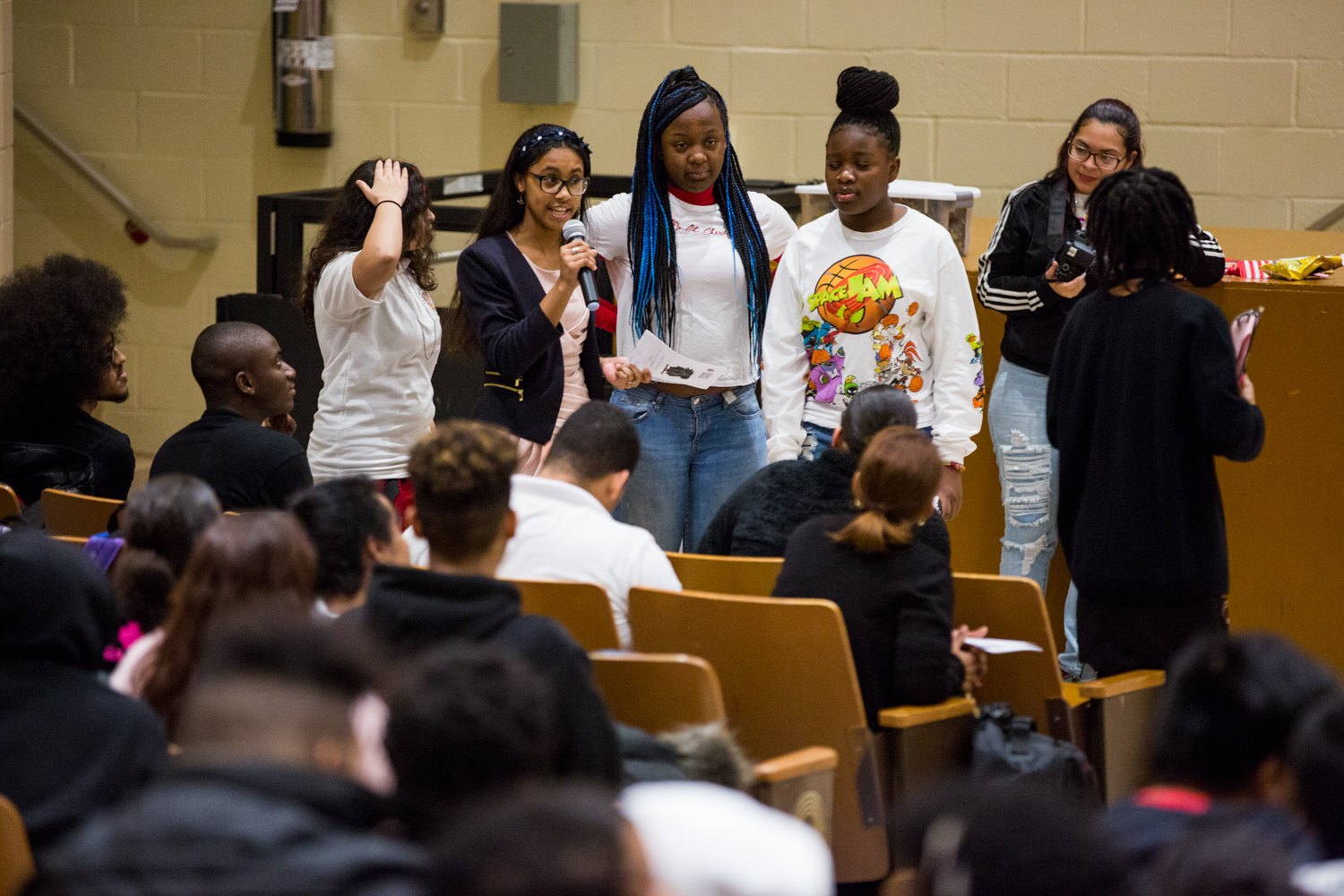 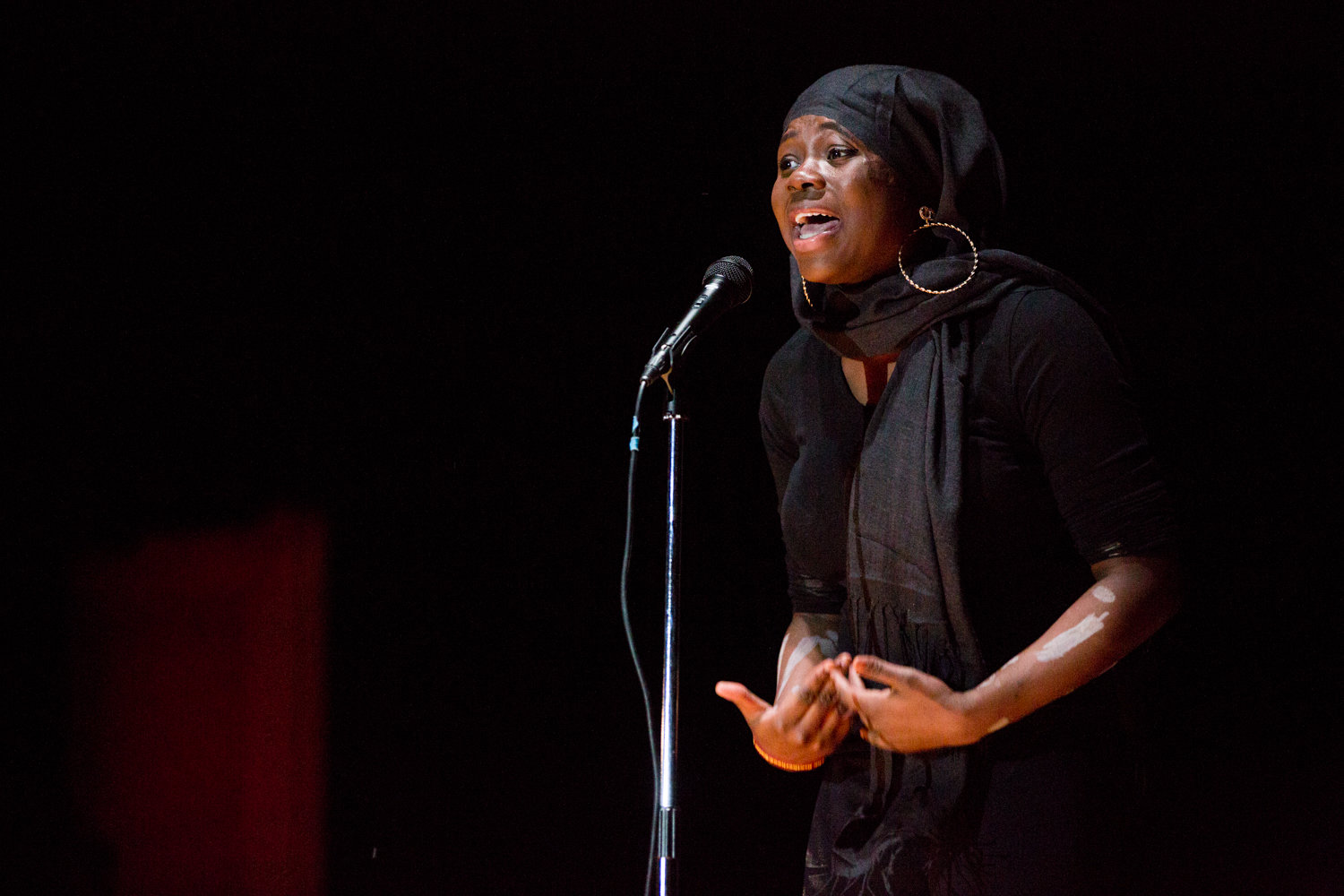 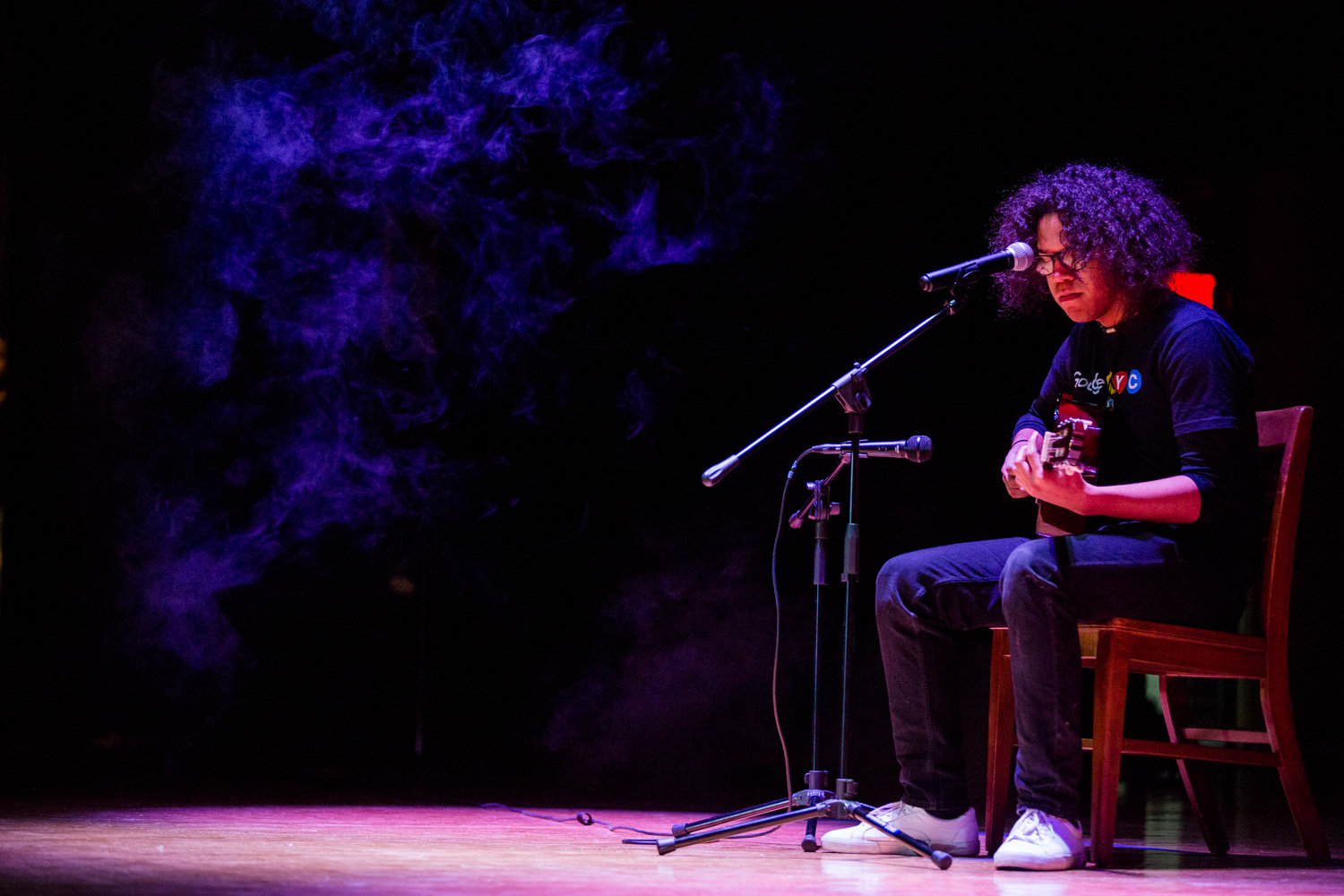 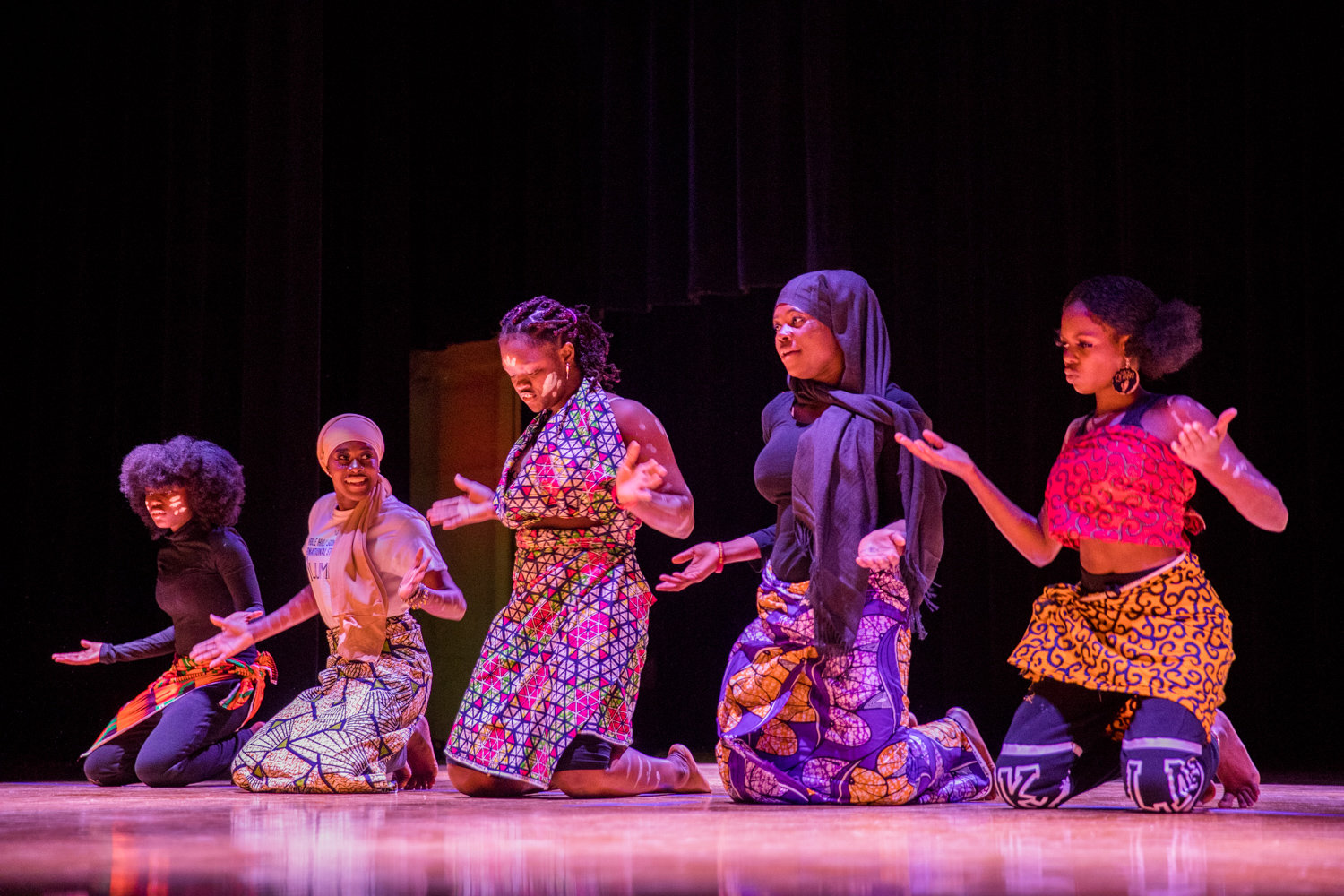 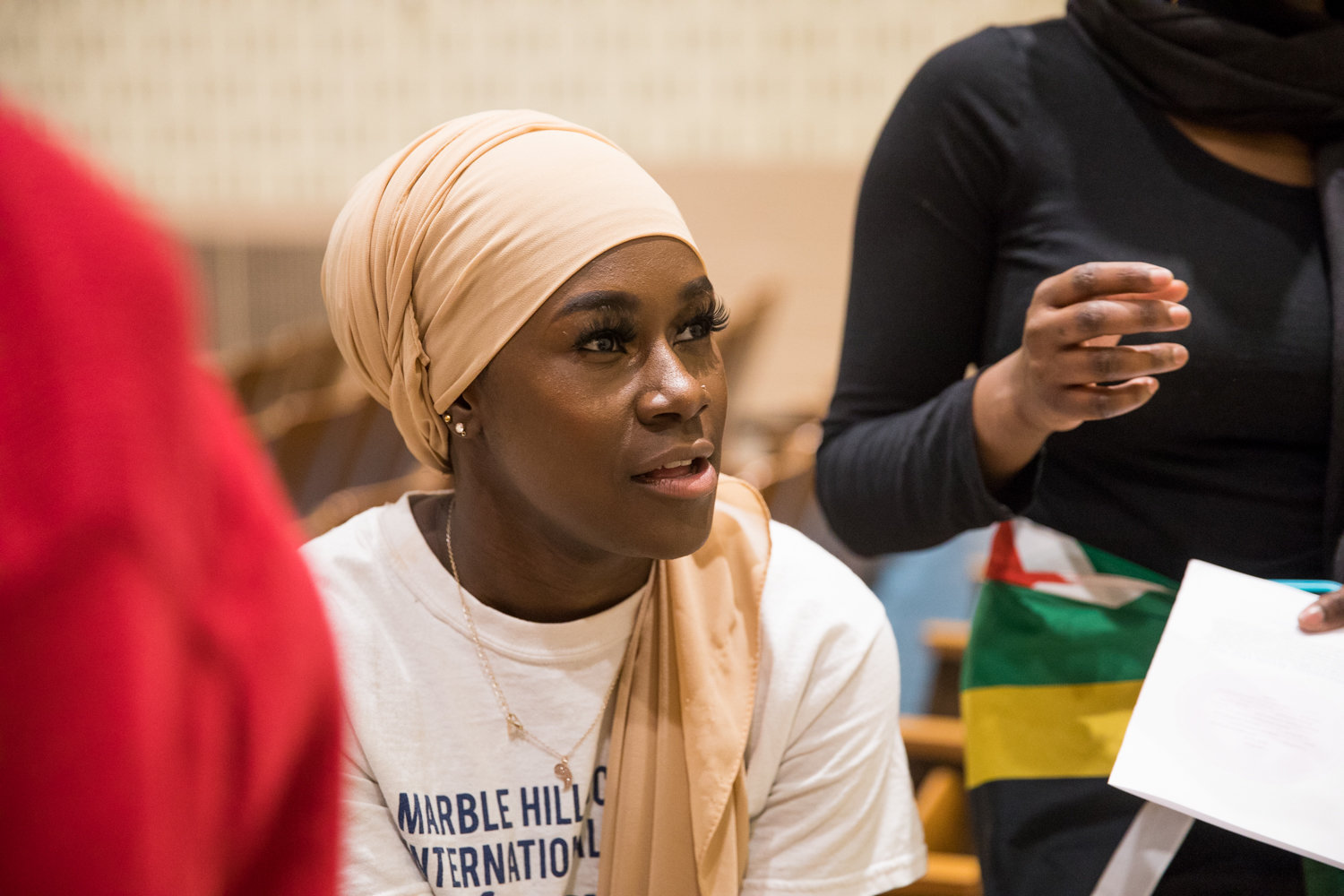 Fatoumata Camara, a junior at the Marble Hill School for International Studies, talks about her West African heritage and how it influenced her approach toward putting together a performance for the school’s second annual Black History Show.
JULIUS CONSTANTINE MOTAL 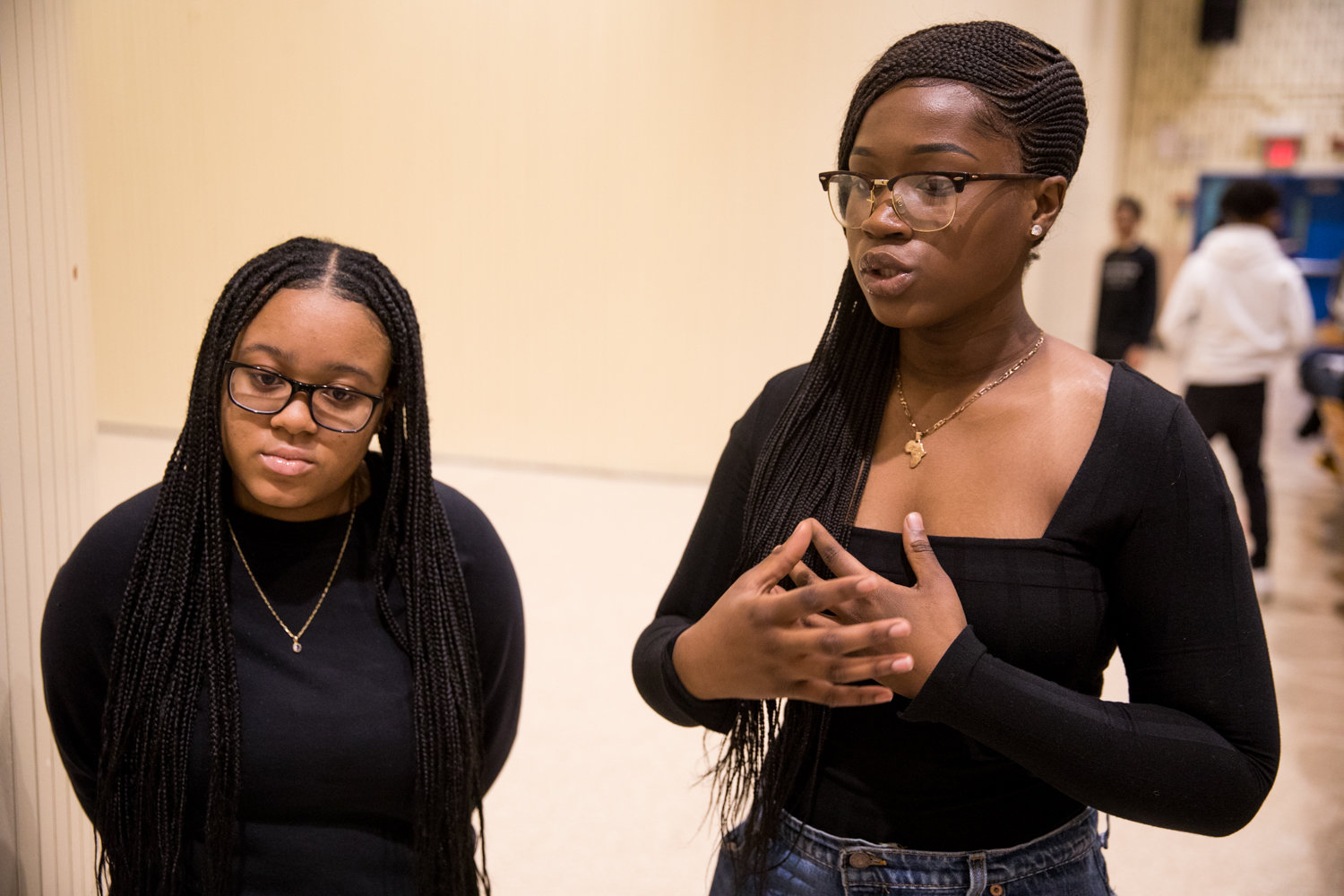 Marble Hill School for International Studies senior Massiata Cisso talks about her work in the school’s Black Student Union and what it was like putting this year’s Black History Show together. Cisso co-founded the Black Student Union with Tamara Wood, left.
JULIUS CONSTANTINE MOTAL 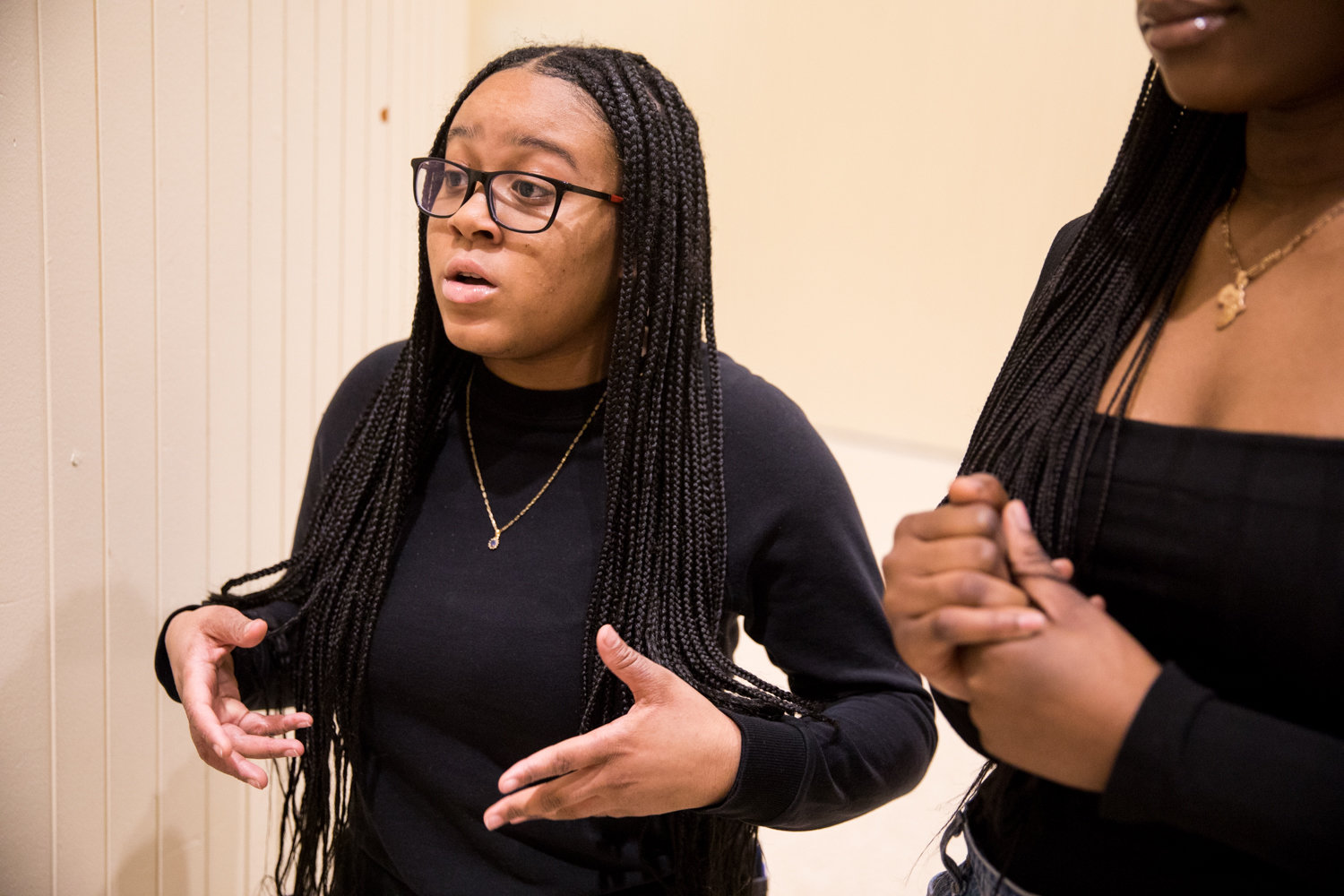 The Marble Hill School for International Studies is a diverse place, focusing on students who want to study foreign languages and cultures. Yet until last year, they were missing one particular student group: a Black Student Union.

Its arrival finally came thanks to the school’s first ever Black History Month variety show, where students performed songs, dances and poetry at the Terrace View Avenue school to celebrate the history of black culture, ranging from the 1960s to the present day.

It was that show which prompted two Marble Hill School students, Tamara Wood and Massiata Cisse, to found the Black Student Union as a way to extend the reach of black history past the bounds of February and the school’s auditorium.

“I was very inspired by the show last year,” said Cisse, a senior at the school. “The whole school was just blown away. We had planned to have a black history show, but then we realized that there wasn’t a group or a club where we could all speak about issues and be comfortable and be fully represented.”

“When we were on that stage, it felt like such a community,” said Wood, also a senior. “We noticed all the talent that these kids had, these boys and girls, all these black kids, you know? We don’t get to see a lot of that all the time. So I thought this would be an opportunity to have a solid community within our school.”

Wood texted Cisse and a few other friends, and from there they organized the Black Student Union.

They’d focus immediately on education and creating a space for community and support within the school. But they also took on another task: Organizing the annual Black History Month show at Marble Hill School.

On the day of this year’s performance, twin sisters Hawa and Fatoumata Camara joined classmate Djeneba Coulibaly in preparation for their performances. They were at the heart of last year’s show, according to Woods, working with the administration and organizing student performers to pull it off.

“We had a theme, and the theme was to go back to the tradition,” Hawa said. “We’re going to be dancing, and doing some poetry in the show. We’re all from West Africa, so we wanted to implement that, and show where the roots of black history come from.”

Coming from African American households, the Camaras and Coulibaly already were familiar with the traditions they would celebrate during the show. Given the diversity of the school, though, not all of their classmates are familiar with black history and cultures.

A weekly meeting at the Black Student Union, they said, brings everyone together to talk about accomplishments throughout history. They can talk about issues that aren’t usually covered in the classroom, Wood said, and the club members empower each other.

They’ve organized panel discussions talking about stereotypes against black women and racism within black communities. Since the club is so new, though, they’ve spent a lot of time just first getting to know each other.

During some of those meetings, they also planned out their performances for this year’s show. Cisse wanted to include a segment on black fashion and beauty, something she thought was lacking last year.

“That’s a very important part of our culture,” she said. “When I think of black culture, I think of the way we do our hair.”

Hawa performed two dances and read her own original poem, titled simply “Racism,” a culmination of her frustration of living in a society that doesn’t want to see her succeed. All of it once again bringing such issues to the forefront of the entire school body.

Now that their biggest event of the year has been pulled off, Wood is excited to get back to business as usual. Wood and Cisse also keep an eye on the future, already starting to organize elections for their successors since they both graduate in the spring.

Putting on the event is more than just giving black students a space to express themselves and embrace Black History Month, Cisse said. She hoped that it would inspire other students across the city to stand up for their history in their own schools.

“Self-advocate for yourself,” Cisse said. “If you see something that’s not in your community, go start it. Then when you start a project, that’s going to create a large picture.”

She hoped those larger pictures would drown out the negative depictions of young people of color that can feel overwhelming sometimes in the news.

“The portrayal of black and brown kids in the media these days is really horrible,” Cisse said, “and we want everyone to know — whether it’s as small as the Bronx or the whole world — that we are more than just police brutality, slavery, and all these arrests that black and brown kids experience.