Target is squarely on the back of incumbent Gustavo Rivera vs. Migelina Camilo 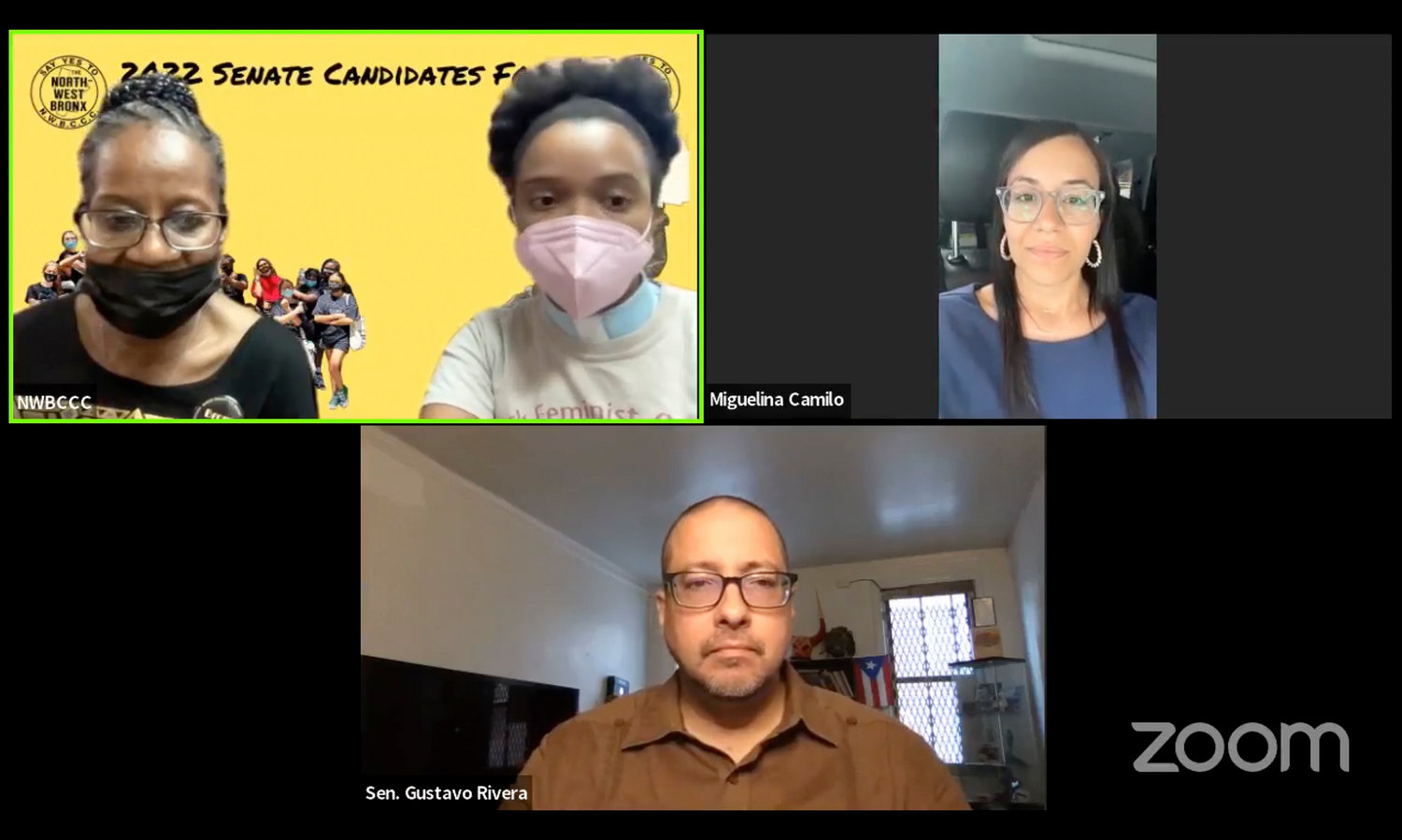 New York State Sen. Gustavo Rivera and opponent Miguelina Camilo went back and forth in a forum hosted by Northwest Bronx Community and Clergy Coalition last week. With the Democratic primary less than a week away, outside money has begun to bombard the race.
Hiram Alejandro Durán
By Sachi McClendon

Two corporate super PACs are putting their weight behind Miguelina Camilo in the hopes she can oust the embattled Gustavo Rivera from his state senate seat in next week’s primary.

Evidence of that arrived last week when the super PAC Common Sense New Yorkers took out a full-page ad in The Riverdale Press, calling Rivera “dangerous” and “reckless” with an “extreme agenda” that’s “pro-BDS.”

Voters in the district also began receiving similar flyers from the group soon after. BDS stands for the movement to boycott, divest from and place sanctions on the Israeli government.

The first, introduced in 2016, aimed to prohibit the state government from investing or contracting with businesses “that promote or engage in activities to boycott American allied nations.”

Neither bill ever became law.

“While I may disagree with the actions that this organization (ASA) has taken as it relates to Israel in that particular case, I think that this bill is much more broad than that, and it is why I must oppose it,” Rivera said on the chamber floor back in 2014, expressing worry the legislation would stifle academic freedom.

The ad also includes a 2015 tweet from Rivera praising Linda Sarsour — a political activist who, among many other things, supports the BDS movement.

Rivera told The Press last month he does not support the boycott, divestment and sanctions movement.

Then this past week, Rivera’s campaign fired back on the Common Sense New Yorkers ad, saying in a statement that “corporate and lobbyist money has poured into this race to prop up” his opponent.

“It’s clear their right-wing tactics will stop at nothing in the final weeks to the primary, as they spread false information about the senator’s record.”

The campaign then called on Camilo, the Bronx Democratic Party, and other elected officials to denounce the ad. Camilo’s campaign did not respond to The Press when asked if she would do so.

Common Sense New Yorkers, which is funded primarily by real estate developers and financial interests, has spent big in local and state elections in the hopes of defeating progressive candidates.

As of Sunday evening, the group has only reported spending $9,000 on the race, according to state financial disclosure records. Yet it spent upward of $1 million in a last-minute campaign against a slate of progressive candidates during the June Assembly primaries.

According to the New York Post, the goal was to prop up candidates who “value public safety.”

As part of that spending, the group sent out mailers in Jeffrey Dinowitz’s Assembly primary in June, calling first-time candidate Jessica Altagracia Woolford a “dangerous, reckless socialist” who “pledge(s) to defund the police.”

The group’s chief executive, Jeff Leb, did not respond to a request for comment.

Nevertheless, public safety has been a chief concern of Camilo.

“Any uptick in crime is something that should concern all of us,” Camilo’s campaign website reads. “As someone who’s spent years in our courts, I’ll make sure that law enforcement, across the board, has the resources it needs to keep our neighborhoods safe.”

In contrast, Rivera has called in the past to redirect funding from law enforcement to other social services.

“I believe we need to keep our police focused on policing and stopping crime,” the state senator said. “They are not mental health workers. They are not addiction specialists. They are not educators. For those services, we need to hire and use the appropriate personnel.”

Now Mayor Eric Adams, who ran a campaign on improving public safety, is putting his weight behind Camilo. On Tuesday, the mayor hosted a cocktail reception and fundraiser for her at the posh Midtown restaurant Osteria La Baia, a favorite haunt of his.

That’s not the only help Camilo is getting. A separate super PAC, New Yorkers for a Balanced Albany, has reported spending $435,000 in ads propping up the first-time candidate. On Monday, voters in the district began receiving mailers from the group claiming Rivera took $560,000 from “health care and pharmaceutical special interests and Albany lobbyists,” while chairing the senate health committee.

The super PAC is managed by StudentsFirstNY, a pro-charter school advocacy group, and has been on the receiving end of hundreds of thousands of dollars from people like billionaire Daniel Loeb and Walmart heirs Jim and Alice Walton.

And that, nearly a half-million dollars appears to not be going to waste. When asked about the role of charter schools in the state’s education system at a recent candidate forum, Camilo gave them her seal of approval.

“And I don’t think they have to be mutually exclusive. Charter schools — when they’re serving 10 kids, nine out of those 10 kids are students of color.”

Whether the two super PAC’s investments will pay off remains to be seen.

Early voting is already underway, and after the first two days, a little more than 1,000 people have cast their votes throughout the entire borough.

With low turnout numbers expected, it is believed these ads could give Camilo just the edge she needs to become the next state senator.