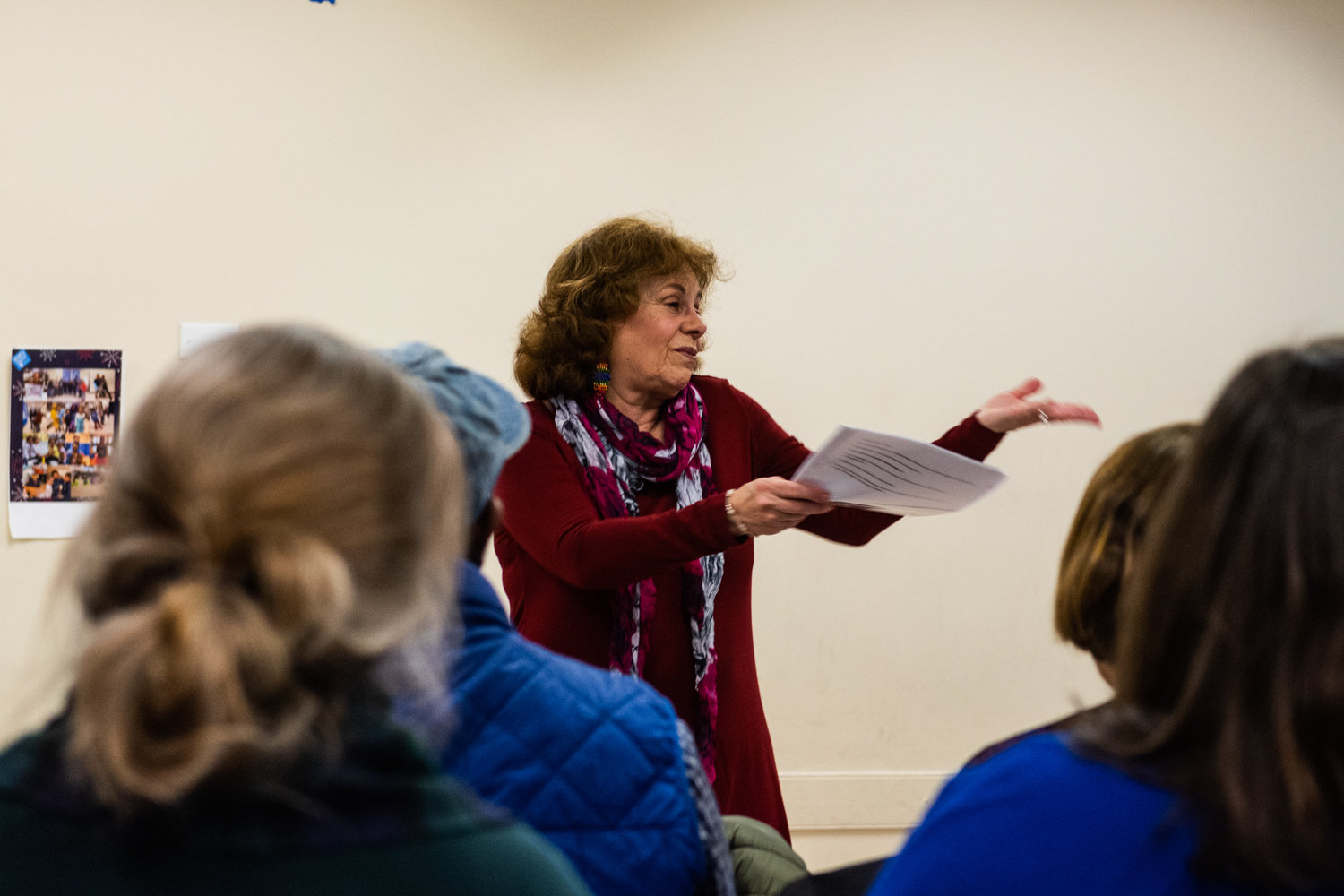 Mimi Goodman talks about her experience as a parent with LGBTQ children during the inaugural meeting of Bronx Parents of Pride at The Riverdale Y. 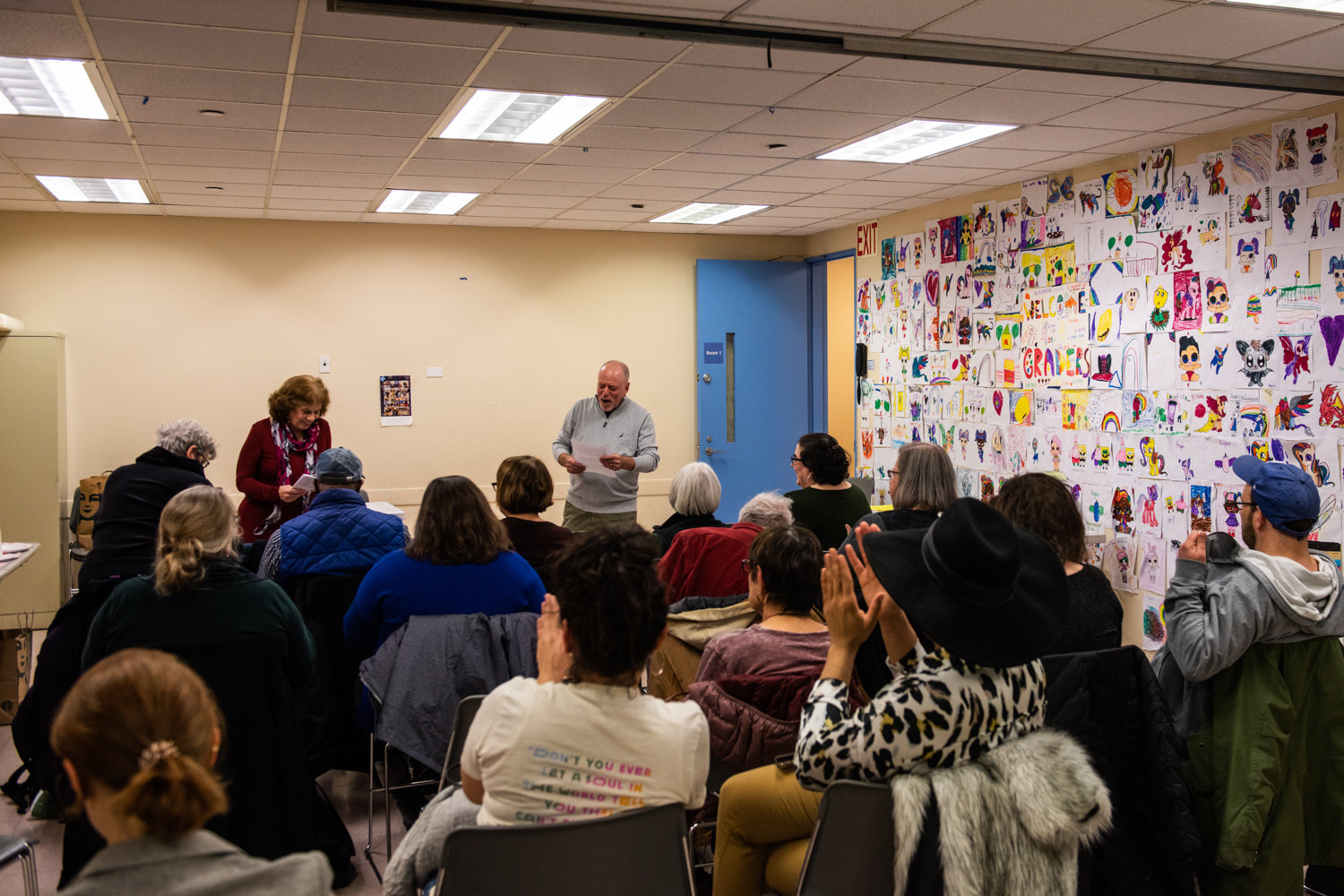 The inaugural meeting of Bronx Parents of Pride at The Riverdale Y sought to help people better understand their family members in the LGBTQ community. 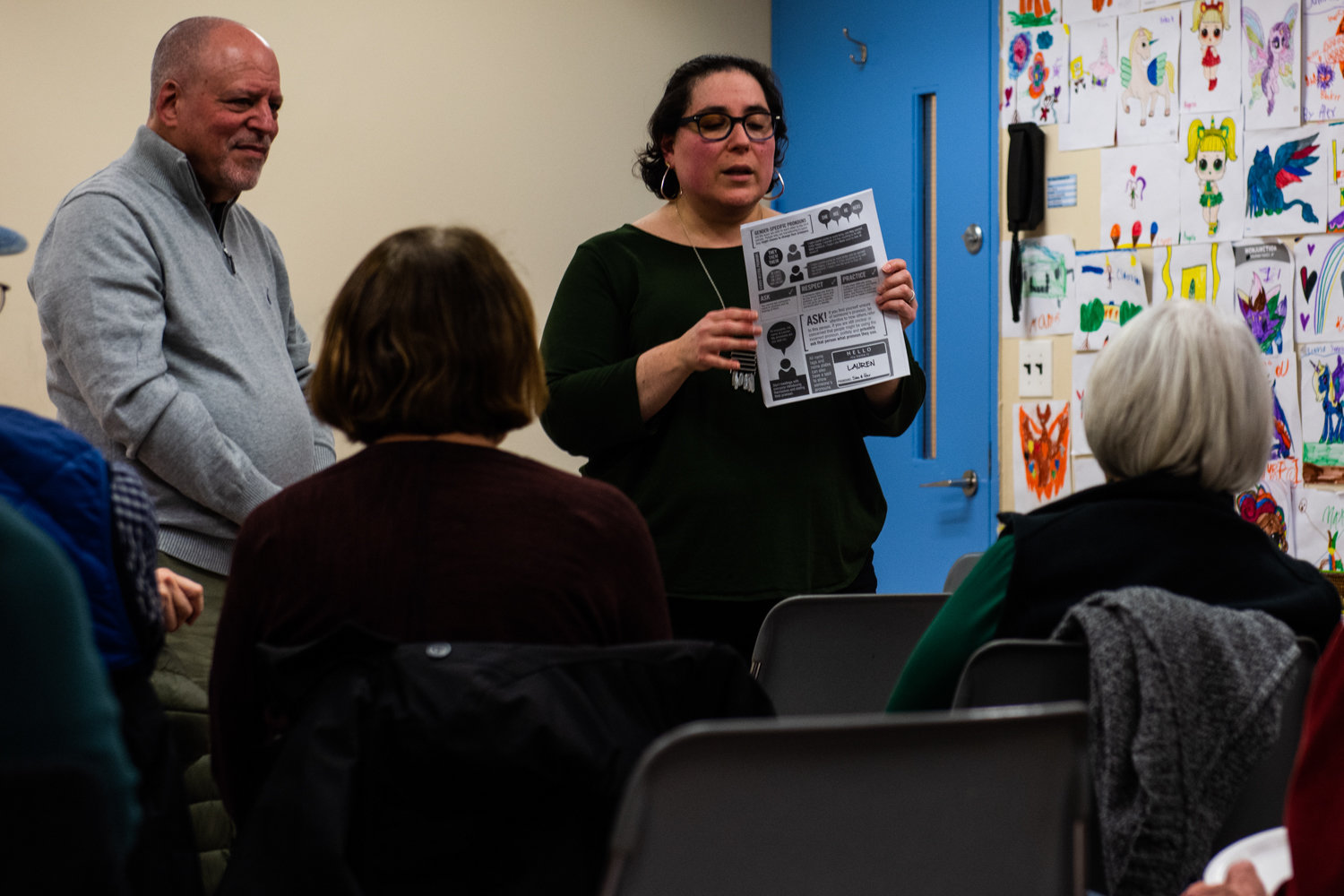 Eva Dolgin and Jerry Goodman lead a discussion at the inaugural meeting of Bronx Parents of Pride at The Riverdale Y. The group seeks to help people better understand the LGBTQ community, and their friends and family members who are part of it. 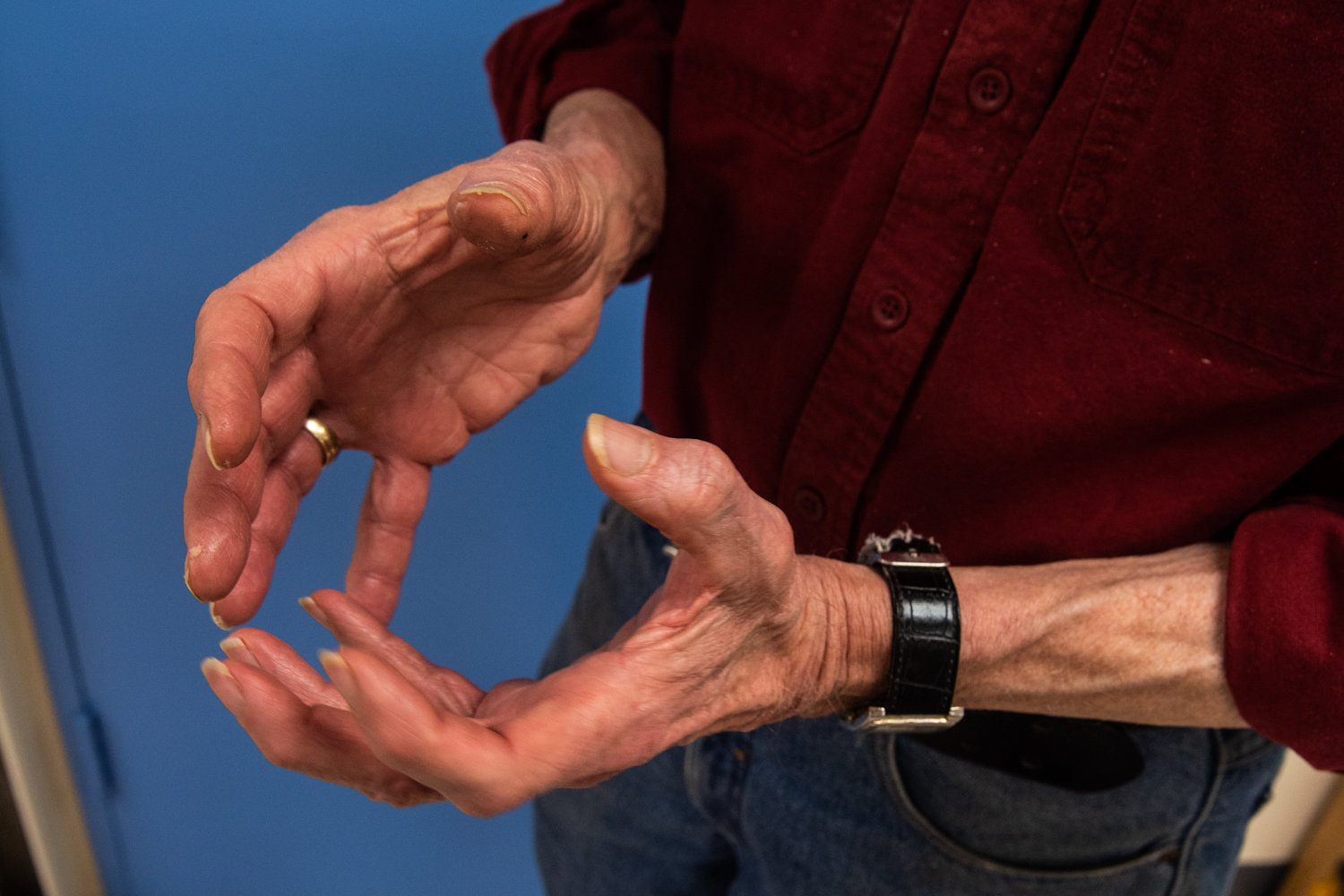 An attendee of the inaugural meeting of Bronx Parents of Pride shares his idea about how he views gender and sexuality as a sphere, rather than a spectrum with the two poles of ‘male’ and ‘female’ at either end. 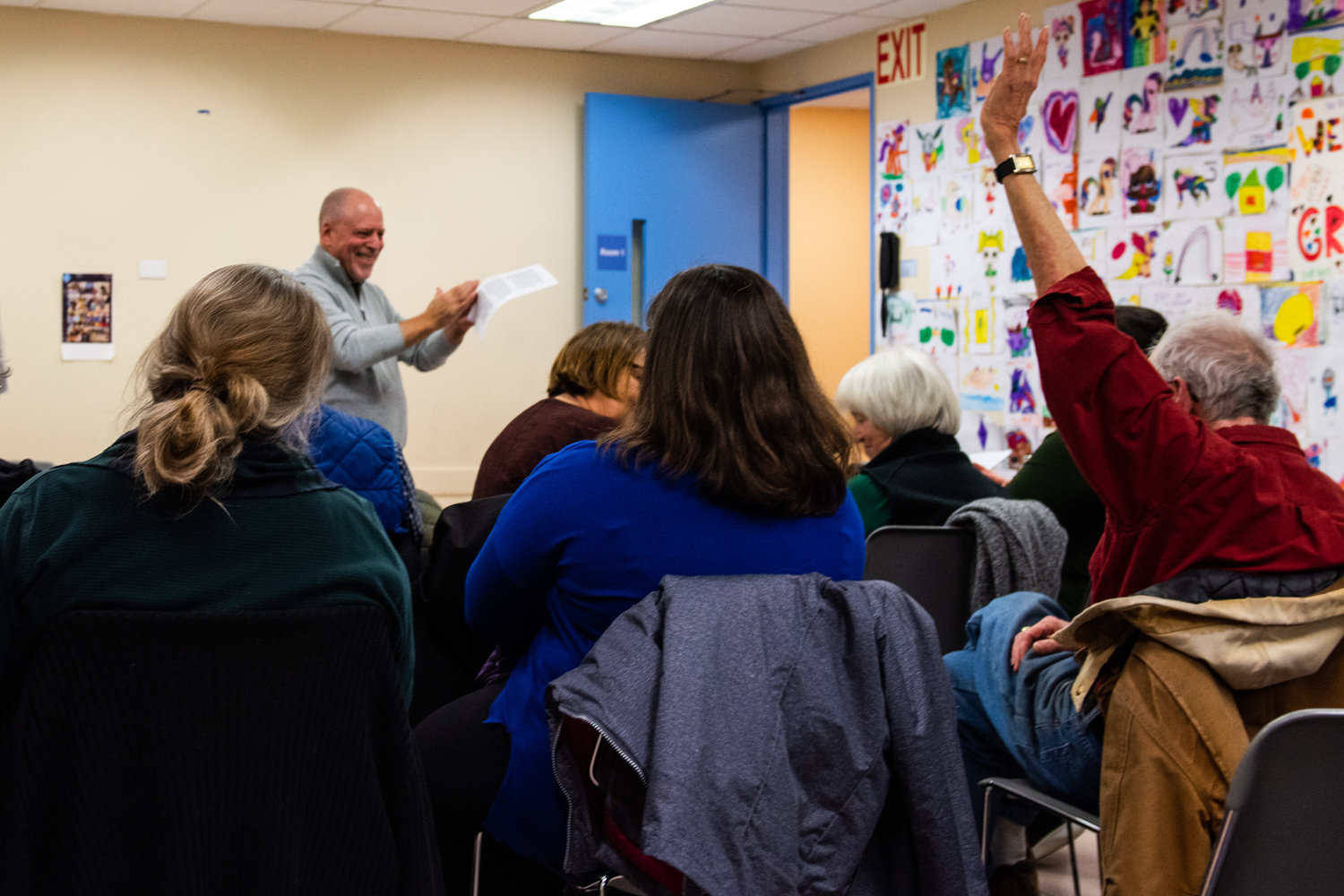 Jerry Goodman, left, fields a question from an audience member at the inaugural meeting of Bronx Parents of Pride at The Riverdale Y.
Previous Next
By KIRSTYN BRENDLEN

Jerry and Mimi Goodman have always been activists, standing up for causes important to them, and important to the world they live in. But as their children got older, they realized there was one group that seemed to be regularly overlooked — those of the lesbian, gay, bisexual, transgender and queer community.

They are parents of two children who came out just a few years apart — their daughter as gender nonbinary, and their son as gay.  That prompted Jerry and Mimi to put their anti-war and civil rights protest work on hold as they focused more on the LGBTQ community, something they have now done for nearly 25 years, working mostly with young people and their families in schools and organizations in their native Yonkers.

“We were not homophobic,” Jerry said. “But we were homo-ignorant.”

When Jerry and Mimi moved to the Bronx three years ago, they discovered that, unlike in Westchester County, there was no chapter of PFLAG, an organization for both people in the queer community and their families and allies. In fact, while there are some community centers and organizations geared toward LGBTQ people, there didn’t seem to be anywhere for parents and allies to go closer to home.

Even as open-minded as they have been about society in the past, both Jerry and Mimi admit they’ve needed help to learn and progress with the times, and they recognize that other parents and family members need that same support. Late last year, they found a home for a new pride organization at the Riverdale-Yonkers Society for Ethical Culture. And in mid-February, they hosted the first meeting of what has since become known as Bronx Parents for Pride.

“I would say that we are not starting this group because we were looking for support,” Mimi said. “It’s just very beautiful when you’re in any community, when you’re in your community.”

Jone Johnson-Lewis, who not only is the society leader at the local Ethical Culture meetinghouse but also a board member of Parents for Pride, says education is a key part of family support.

“You don’t go to your gay friends to ask how you deal with your feelings about issues,” she said. “You find other ways to take care of that so you can be supportive. And not make, if you have friends who are queer, that they are somehow responsible for your education.”

It’s the same for parents of gay children, Johnson-Lewis said. Parents may struggle to understand what their children are going through, or fear that their lives will be harder, or that they may face violence. But talking with their son or daughter about those fears won’t help anyone. Instead, it’s better to share those with others who might feel the same way — like the kind of people who might show up for a Bronx Parents of Pride meeting.

The first meeting was hosted by Eva Dolgin, the director of the youth pride program at CANDLE, a youth-centered organization in Rockland County known more formally as the Community Awareness Network for a Drug-free Life and Environment.

Dolgin was there to provide a sort of baseline for the group. She introduced herself using pronouns “she” and “they,” used interchangeably. The group introduced themselves using their names and preferred pronouns, a first for many, even for Mimi.

As Eva moved through her talk, she paused for questions from the crowd. One of the first: How is “they” used as a singular pronoun when it’s usually plural?

It’s not a tough question, necessarily, but it did require some explanation. People who are nonbinary or gender-fluid may use “they,” since they don’t identify as men or women, and may feel alienated by the use of “he” or “she.”

When their daughter first came out, Mimi said, the language to describe being nonbinary didn’t exist. It was only years later that she was able to describe how she really felt. And it was their son who explained the ongoing nature of coming out to different people, in different situations.

“They’d be talking about their wives, their girlfriends, and even today, we’re still living in a heterosexist society,” Jerry said. “And so he said, ‘You know, I’m always having to come out. I’m not just out. It’s never finished.”

There was also the question of the word “queer,” which has been used as a slur, but is now often used within the community. It serves multiple purposes, Dolgin said, working as an umbrella for many people within the community, as well as a marker for sexual or gender identity and, sometimes, as a political statement.

“Queer” might be more likely to get a rise out of someone, she said, and start a conversation.

And what can parents and allies do? Dolgin said that at CANDLE, she’s sure to leave space for young people to “try on” pronouns, labels, and even names as they figure out who they are. Labels can change over time as someone grows into themselves — even past their teenage years — and allowing someone to figure out who they are is important.

“If someone in their life says, ‘Oh, I’m nonbinary. Oh, I’m pan. Oh, I’m a lesbian,’ that folks have some working knowledge, and don’t have the freeze ‘oh, crap,’ moment,” she said.

After the talk, parents and family members regrouped for the first official support group meeting.

People looking to attend meetings of Bronx Parents of Pride can visit their Facebook page, or email the Goodmans at bxpop1@gmail.com.