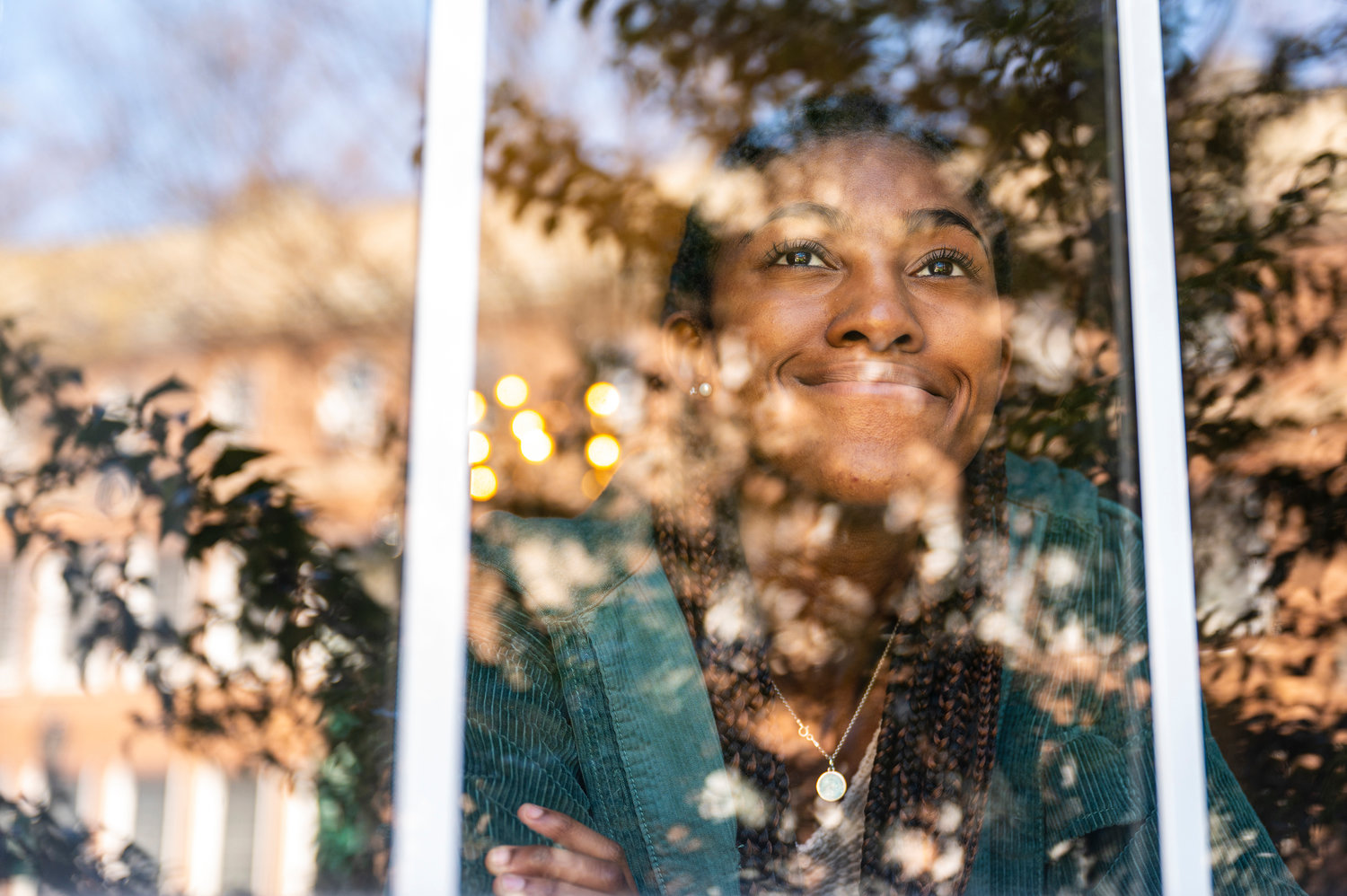 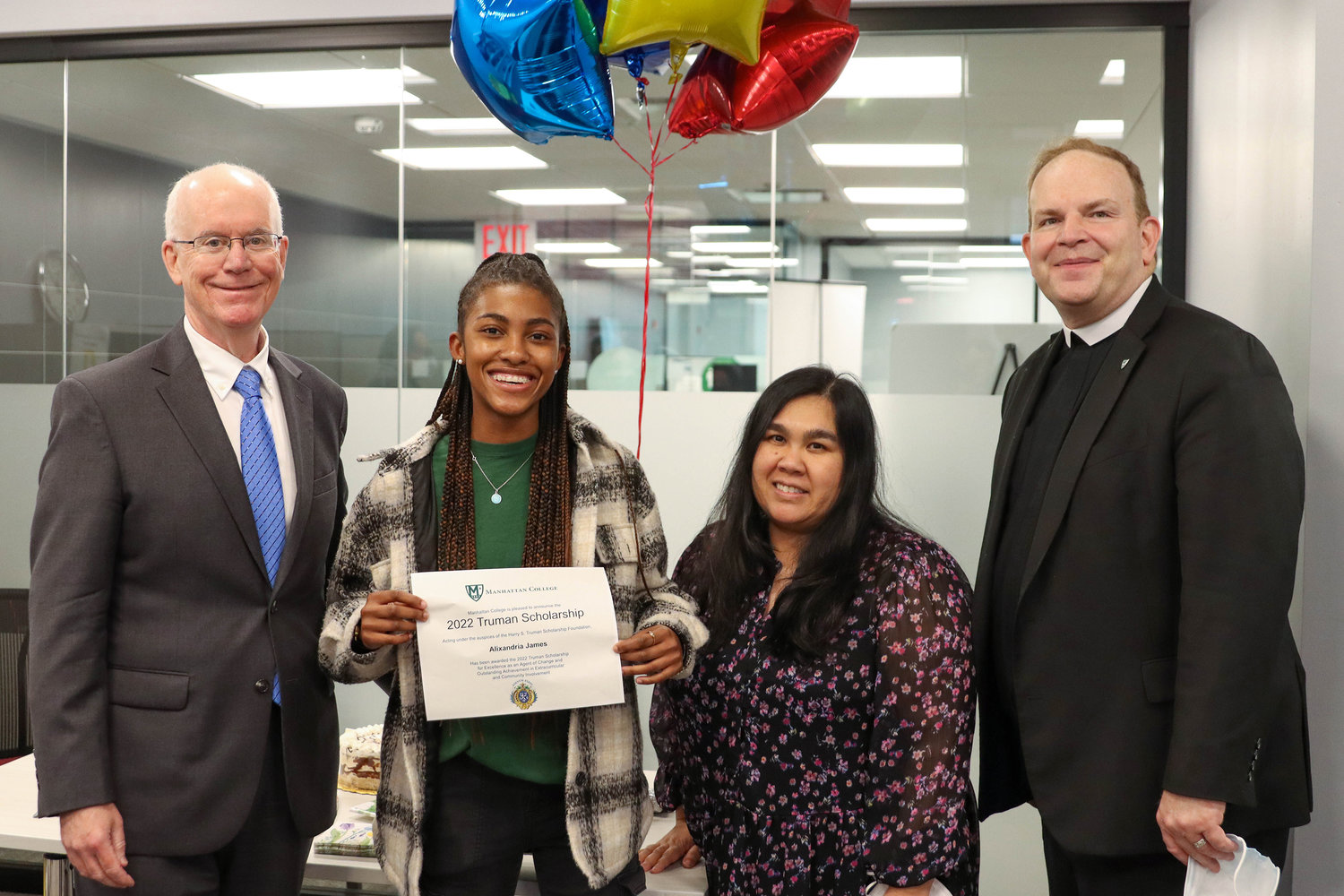 Alixandria James, the first Manhattan College student to be named a Truman Scholar, found out she was chosen for the honor at a surprise party on campus. At the school during her announcement are, from left to right, Manhattan College President Brennan O'Donnell, James, the college’s associate provost Rani Roy and Brother Daniel Gardner.
Courtesy of Manhattan College/ Ryan Warner
Previous Next
By STACY DRIKS

Alixandria James was in the middle of a class when her phone rang. It was Brother Daniel Gardner, head of Manhattan College’s graduate school and fellowship advisement program.

Gardner needed to see her right away, so James made her way to an emergency meeting. But instead of finding a concerned college administrator, James instead was greeted with balloons, cake, and the many faces who helped her through the lengthy application process to become one of just 58 students in the country to win an award from the Harry S. Truman Scholarship Foundation.

Even more, James is the first Manhattan College student to receive the honor.

“’Oh, what now,’” James said, remembering that moment with a laugh, “That’s what came into my brain.”

Started in 1977, the federal government sponsored Truman scholarship is highly competitive, awarded to students who share the same mission as the late president who helped lead the United States out of World War II. The Truman foundation’s mission is to award students who have a commitment and a strong vision towards specifically public service.

Winners receive $30,000 toward graduate school at the school of her choice, which for her are Columbia or Yale universities. They are also offered other fellowships and mentorships with the option of studying in Washington, D.C., the year after they win the scholarship.

The scholarship is designed to help students who want to further their education — and eventually get jobs in either public or government-related services.

Truman himself often spoke about the importance of promoting young leaders, envisioning a program encouraging students to commit to public service. The president even liked to take a small risk by reaching out to college juniors rather than seniors, which is why the scholarship in his name is typically awarded to those in their junior year.

“Six months ago, I didn’t know what the Truman was,” James said. “And now I really think it changed my life.”

In fact, it was in October her research advisor, Rani Roy, emailed James about the scholarship. She ignored, thinking she’d save it for her senior year. But then when a fellow student sent her the same email, James realized it must be important.

She met with her fellowship advisor the next day, ultimately seeking help from a number of people throughout the process.

“I think the most unique component of that application was the policy proposal,” James said.

“I had to come up with a policy,” she said. “I had to figure out, Who do I want to send this policy to? What is it going to address? Why is it important? And what are some obstacles that I would say?”

James ultimately settled on community health benefits funding intended to improve health and prevention services. It was a topic far more broad than the other research she conducted at Manhattan College.

She wrote her proposal sitting by the pool in Florida, and even traveled to Mexico last month to help prepare for her scholarship interview.

In fact, James presented her analysis of the campus social climate during a recent conference at Harvard University. She found campuses need to have better resources for people of color.

James will start an internship this summer researching topics similar to her Harvard proposal — racial battle fatigue, a term used to describe the stress someone of color experiences being racially oppressed on historical white-dominated campuses. James aims to evaluate the level of racial battle fatigue present at Manhattan College.

“I’ve been so impressed with her vision for what kinds of changes she wants to make in public health and her research in that field,” Scaramella said. “She really enlightened me and educated me in global health perspectives.”

As chair of Manhattan College’s political science department, Margaret Groarke collaborates with Brother Gardner to recruit students who are prime candidates for the Truman award.

“I work on community engagement, so I often like reach out to students who are involved in community service on-campus and off-campus,” Groarke said.

And many times, the application process itself can be a learning experience, even if they’re not ultimately chosen, Truman Foundation officials say. It helps them reflect on past experiences as well as the various paths of public service they may want to explore. Relationships are created, as well — especially with peers.

While many were happy for James, she’s now starting to feel some of the pressure that comes with winning the award.

James majors in public health — a field she has focused on, even while growing up in Stamford, Connecticut.

She was inspired by her father — a Manhattan College alum himself —who is a health care worker.

Yet, James herself is still not sure exactly where in public health she’ll end up.

“I didn’t like blood,” she said. “So that ruled out doctor pretty quickly.”

James had developed a real passion and interest for social justice in high school, and public health for her really encompasses that, tying it all together. Right now, James is an outreach program intern at NewYork-Presbyterian Hospital.

Her job has been to reach out to the community, educating people about the importance of COVID-19 vaccinations, all while directing Black and brown communities to health care services.

As she continue her public health work, James still finds it a little overwhelming because she had a lot of paths to take. But the overall route might be a little clearer now that she is a Truman Scholar.

James hopes all of her hard work sends a message to others who might be conflicted about their future. But she hopes to instill Truman’s legacy of working hard.

In fact, one Truman quote says it all: “Do your duty, and history will do you justice.”

“Honestly, I don’t think it matters what the name of your school is — or where you go to school — as long as you have the drive and the work ethic, and you find something that you’re truly passionate about,” James said.

“I think the sky’s the limit.”