Should Manhattan College distance itself from the likes of Raymond Kelly? 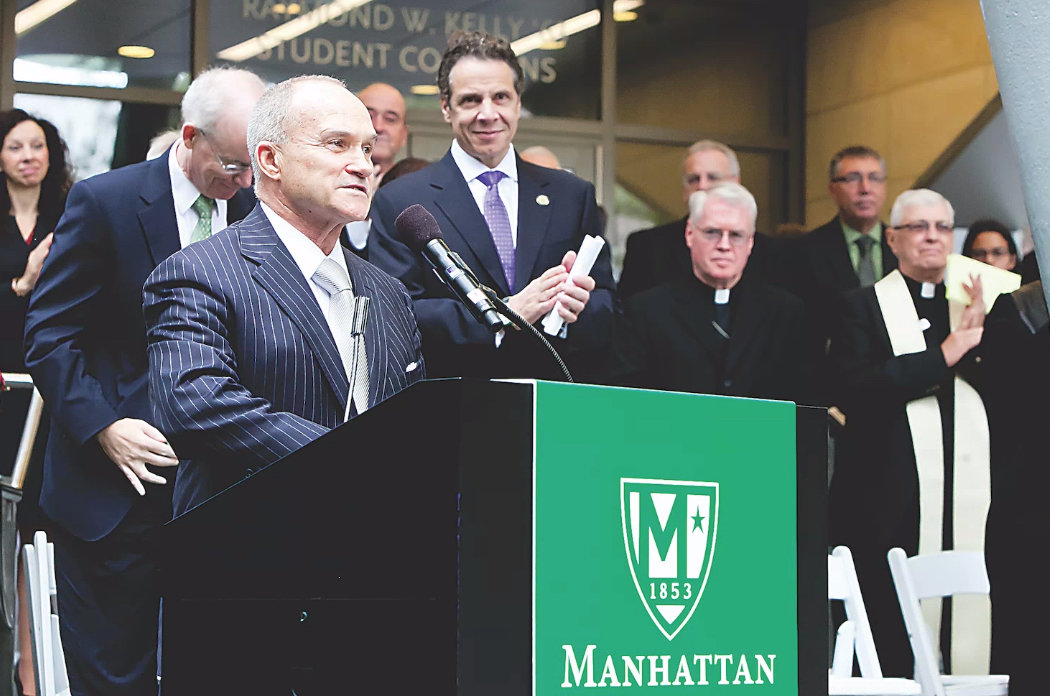 Former New York Police Department commissioner Raymond Kelly gets a standing ovation from Gov. Andrew Cuomo along with others at the 2014 dedication of the Raymond Kelly Student Commons at Manhattan College. Students, however, are now pushing to have Kelly’s name removed because of his involvement in the NYPD’s controversial stop-and-frisk program.
MARISOL DIAZ / File 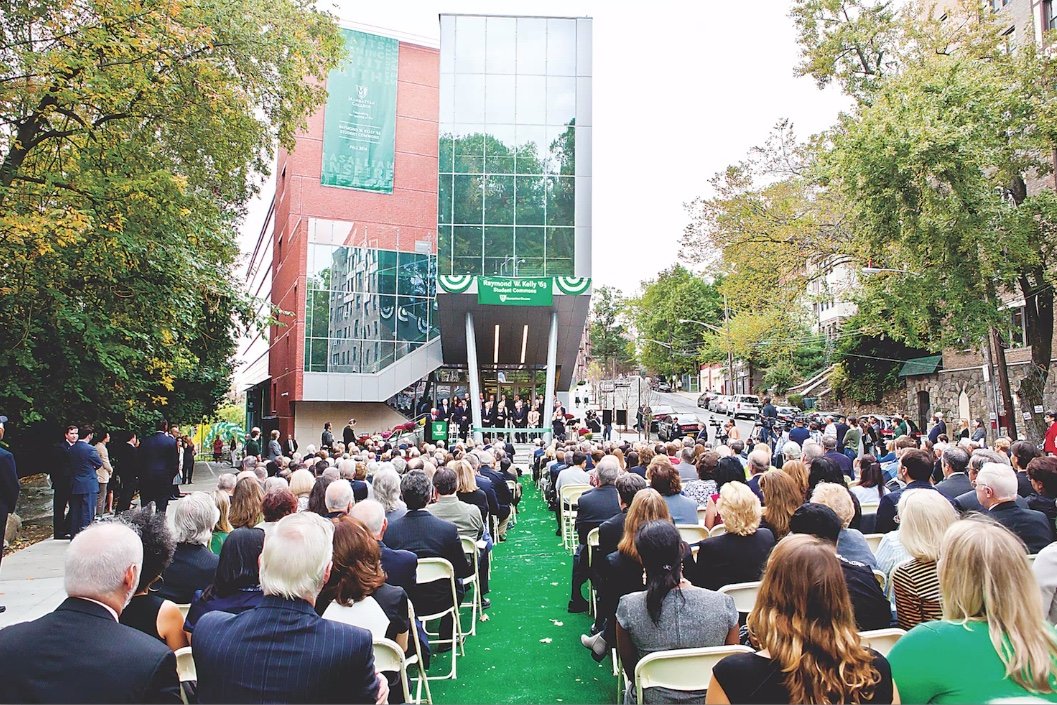 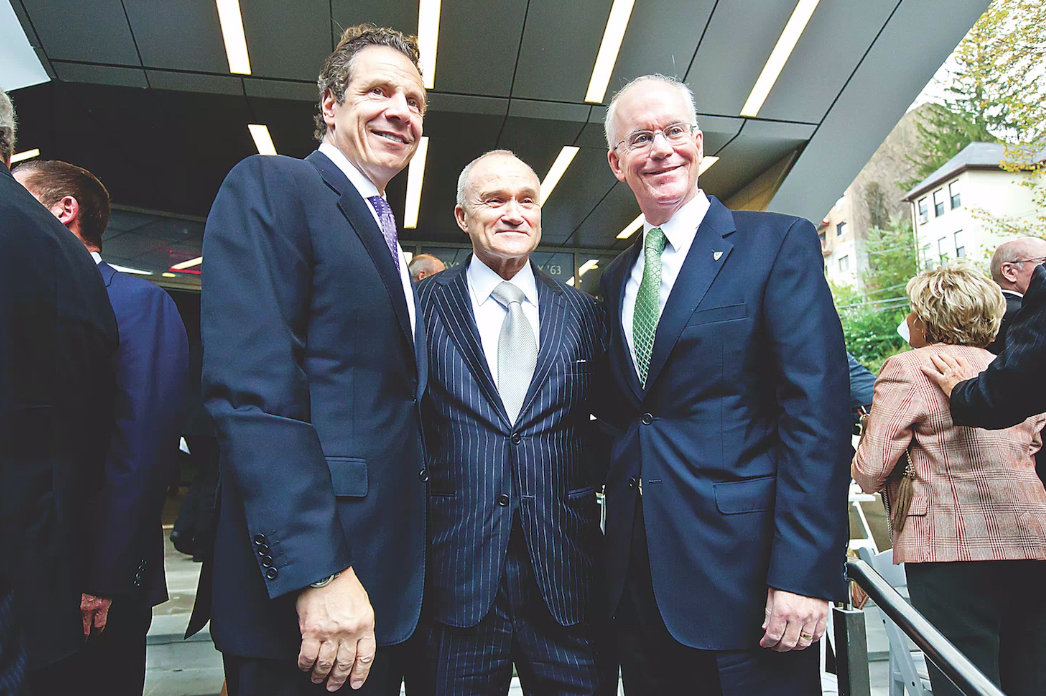 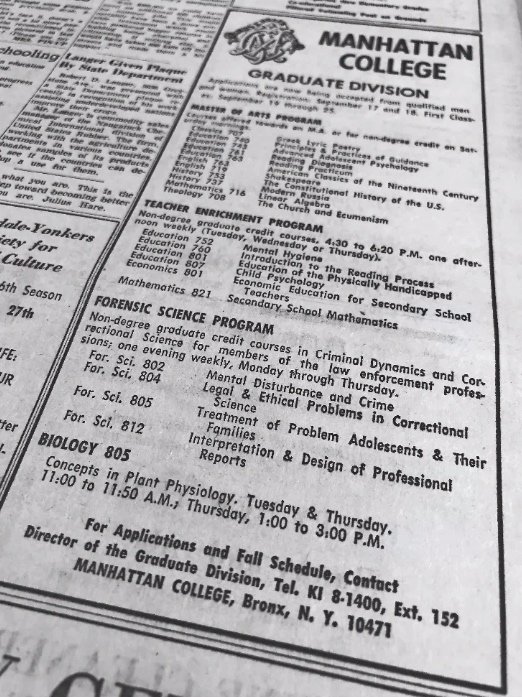 Manhattan College didn't always refer to itself as exclusively a Riverdale school. This 1964 advertisement that appeared in The Riverdale Press lists its address as the Bronx.
MICHAEL HINMAN
Previous Next
By ROSE BRENNAN

The death of George Floyd sparked what is now recognized as one of the largest movements for civil rights since the marches led by Dr. Martin Luther King Jr., in the 1960s. And several organizations at Manhattan College are leading the charge locally, hoping to make the school more welcoming to students and faculty who identify as Black, Indigenous and people of color — also known as BIPOC.

In the midst of the protests, on June 12, the college’s newly instituted critical race and ethnic studies department released a statement opposing institutional racism. The statement outlined nine steps for the college to take to address what it described as white supremacy on campus.

At the top of the list was the “removal of symbols of white supremacy on campus,” including renaming the student commons, named after Manhattan alum and former New York police commissioner Raymond Kelly because of what they said is his role in popularizing stopand-frisk — a practice which they say disproportionately targeted BIPOC — during his tenure as commissioner.

The statement also called for the removal of photographs and portraits of both Kelly and former New York City mayor Rudy Giuliani, a fellow Manhattan College alum and proponent of stop-andfrisk, who has made news more recently as an unofficial surrogate for President Donald Trump.

Another item called for the college to embrace the Bronx community in which it operates, including changing the college’s tendency to market its location as “Riverdale” instead of the Bronx. Five of the most popular college search websites — College Board, College Insight, Chegg, College Confidential and the National Center for Education Statistics — all list Manhattan College’s location as “Riverdale, New York.”

David Witzling — an English professor who also is director of the critical race and ethnic studies minor at the school — says he thinks using the term “Riverdale” to describe the college’s location can be exclusionary.

“Riverdale is a lovely neighborhood, and distinctive, but we feel that there’s really a lot to be gained by Manhattan College embracing its connections to all of the Bronx,” Witzling said. It’s “been understood for a very long time by people outside of the neighborhood that when people claim to be from Riverdale — rather than from the Bronx — that they’re closing themselves off.”

The statement also called for the college to “make its relationship with (the) local police precinct fully transparent to the entire community,” citing the University of Minnesota’s decision to cut ties with the Minneapolis Police Department following Floyd’s death.

“That was a gesture to say, ‘Hey, if (we) want to solve this problem of racialized police brutality, and if we don’t want members of our own community to be subject to that, first, we should try to understand how the college works with the local precinct,’” Witzling said.

Other groups on campus are also fighting for racial equity, like the Black Student Union. The group recently released a series of demands for the college to better serve its Black students — who accounted for about 6 percent of the total student population during the 2017-18 academic year.

One of the primary demands of the Black Student Union is for funding. For the past two years, the group operated as part of the college’s Multicultural Center. Now, having recently become an independent group, they have no funding, and must wait until both the college’s student engagement office and its student government approve a budget.

After Floyd’s death, the Black Student Union hosted two events called “Tell Me How You Really Feel” via the Zoom online videoconferencing app. According to Mamady Ballo, a rising junior and the vice president of the Black Student Union, the first forum provided a safe space for BIPOC students to share how they’ve been affected by racism.

“Students were just giving their opinions and (sharing) their experiences of racial injustice and how they felt,” she said, “whether it was on campus or off-campus.”

The Black Student Union also supports renaming the student commons, especially since it was named after someone who popularized a practice they say disproportionately targeted Black people.

“It resonates with us because that doesn’t provide us with that safe haven — that sanctuary — for the BSU,” said Pauly Paulicap, a graduate student and president of the Black Student Union. Although there have been no institutional responses to either the critical race and ethnic studies department’s statement or the Black Student Union’s list of demands, the college’s administration is attempting to address issues of discrimination on campus through other means. In a college-wide email delivered on June 4, college president Brennan O’Donnell announced the formation of the school’s inaugural diversity council, which he said will endeavor to “promote dialogue, seek meaningful change, and build a truly inclusive educational environment” at Manhattan College.

Manhattan’s director of diversity, equity and inclusion Sheetal Kale will serve as one of three co-chairs of the diversity council. According to her, such a council was in the works since she joined the college in 2018.

The original plan was for the diversity council to kick off in the upcoming fall semester. But given the current racial climate, they felt it was necessary to announce its formation sooner rather than later.

“We needed an urgent response,” Kale said. “We needed a space to discuss the murder (of George Floyd) and how that made people feel about their own treatment here, and how to create more equity and inclusion at the college.”

While some say there are clearly issues of racial injustice still present at the college, people from organizations across campus have made the commitment to short- and long-term change.

“The goal is to make equitable inclusion and belonging an integral part of the college,” Kale said. “We want to make sure that it’s embedded in our institutions and offices, and it outlasts the people who work in those offices.”