Candidates spend more than $100,000 on outside political consultants alone 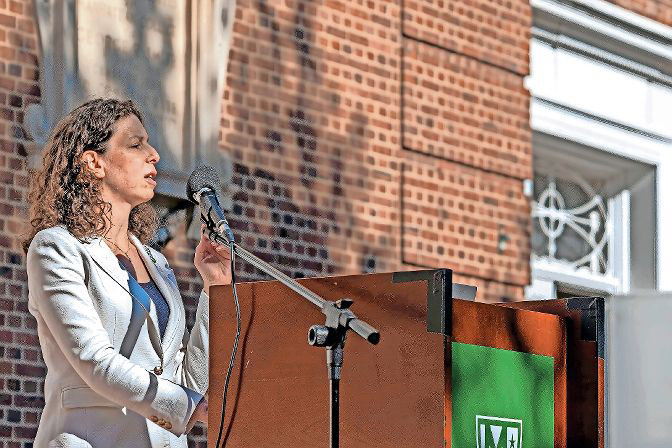 Jessica Haller already spent more than $96,000 in her efforts to succeed Andrew Cohen on the city council. However, less than 10 percent of those funds have stayed in the Bronx. Haller says she is trying to use local sources when possible, but just this past month, spent $18,000 elsewhere in the city for ‘digital ads.’
HIRAM ALEJANDRO DURÁN/ File 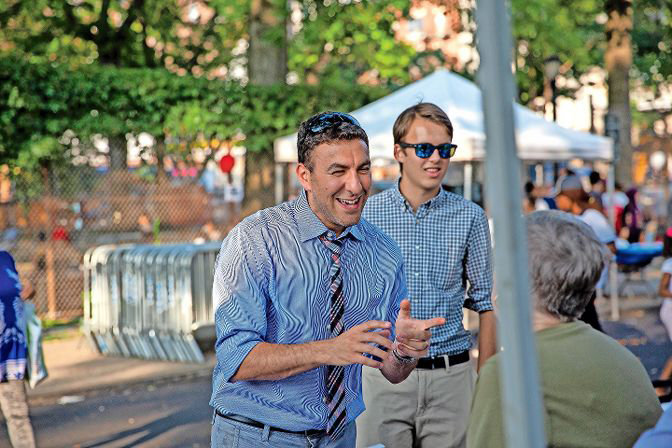 Eric Dinowitz attends National Night Out last month. In his campaign for city council, Dinowitz has raised over $70,000.
EIAN KANTOR/ File
Previous Next
By MICHAEL HINMAN

It’s supposed to be a local city council special election race, but some might say it’s not feeling very local. That is, for everyone except Carlton Berkley.

The retired New York Police Department detective raised just under $7,750 in his effort to succeed Andrew Cohen on the city council — a fraction of the tens of thousands raised by his opponents. But Berkley is spending almost every dollar solely in the Bronx, something no one else in the race can claim.

Nearly 77 percent of Berkley’s funds are coming from the Bronx, while 95 percent of them are returned to the borough. That all comes while his opponents in the March 23 city council special election have spent just 16 percent of their total dollars in the Bronx.

The worst offender in local spending? Fieldston environmental activist Jessica Haller, who already spent more than $96,000 on this special election race, but just 9 percent — $8,400 — remained in the Bronx.

“An analysis of our spending demonstrates that approximately 90 percent of our expenses have been made in New York state, and 80 percent in New York City,” said Paul Henderson, a spokesman for Haller’s campaign. “Thanks to The Riverdale Press and some volunteers, we now have a new relationship with another Bronx print shop.”

That print shop appears to be Bronx Design Group in Pelham Bay, picking up $235 in work for postcards earlier this month. The Haller campaign already spent nearly $1,800 on two print shops located in Briarcliff Manor and Long Island City, but cited Press coverage from financial filings last month in pushing them to move that business to a Bronx business.

Yet, that $235 appears to pale in comparison to the $35,000 Haller spent in the past month alone — second only to former teacher Eric Dinowitz. Nearly 95 percent of Haller’s money went outside the borough, including $18,500 she handed over to her Brooklyn political consulting group for what she labeled as “digital ads.”

But not everyone took past newspaper reporting to look for more Bronx businesses. Mino Lora, a Spuyten Duyvil non-profit executive director, has found herself putting organized labor ahead of local labor.

“We spend in the district when we can,” Lora spokesman David Neustadt said. “But, for example, we use union printers, and we have not found one in the district.”

Still, Lora has found a way to spend a third of her money inside the Bronx. She’s second only to the 95 percent local spending from Berkley, who didn’t respond to a request for comment.

Not far behind Lora in local spending is Kingsbridge Heights real estate attorney Dan Padernacht who has spent just shy of $10,000 since entering the race, with a quarter of it staying inside the Bronx.

Six candidates have entered the final month of campaigning before the March 23 special election with four — Dinowitz, Haller, Lora and Padernacht — qualifying for more than $500,000 in taxpayer-fueled matching funds. If those four continued their spending trends, only $89,000 of that money would remain in the Bronx, while more than $400,000 would end up elsewhere.

Of the $9,500 Dinowitz spent this past month, 21 percent of it remained in the borough. The biggest chunk of that — $8,000 — however, went to attorney Stanley Schlein, considered the main power behind the Bronx Democratic Party machine.

The rest of the local funds were handed over to the Benjamin Franklin Reform Democratic Club, the $1,400 designated in campaign filings as “space usage.”

The club only offers its West 231st Street storefront space to the candidate it endorses. Dinowitz won the Ben Franklin Club’s endorsement after the other candidates in consideration withdrew. They protested the club’s decision to continue with its endorsement vote while suspending officer elections in a way they said directly violated the club’s bylaws.

Haller’s campaign decried this practice as one that violates the spirit of campaign finance law.

“The bigger issue here is that the local machine seems to be playing by a different set of campaign finance rules by maintaining a political slush fund to support its candidate without any public oversight,” Haller’s spokesman said. “Unlike our campaign, which voluntarily participates in the (city’s) campaign finance board matching fund program, and discloses every single penny raised and spent online.”

Eric Dinowitz would not directly answer questions posed to him by The Press, but through his campaign consulting company Red Horse Strategies, said that campaign would continue “investing resources here in the Bronx.”

The Brooklyn-based Red Horse has been paid more than $46,000 from Dinowitz’s campaign. Haller has spent more than $43,000 with Raven Strategies, another Brooklyn-based political consultant group. Padernacht spent $12,100 on Sykes Global Communications in Manhattan, but stopped using them in 2019.

Lora has hired political consultants directly — including a field manager she hired from the Bronx — foregoing consulting groups.

There is still a lot of race — and money to spend — left ahead of March 23. More than $480,000 sits in campaign bank accounts, and the four candidates who received matching funds are all practically on equal financial footing for the last stretch.