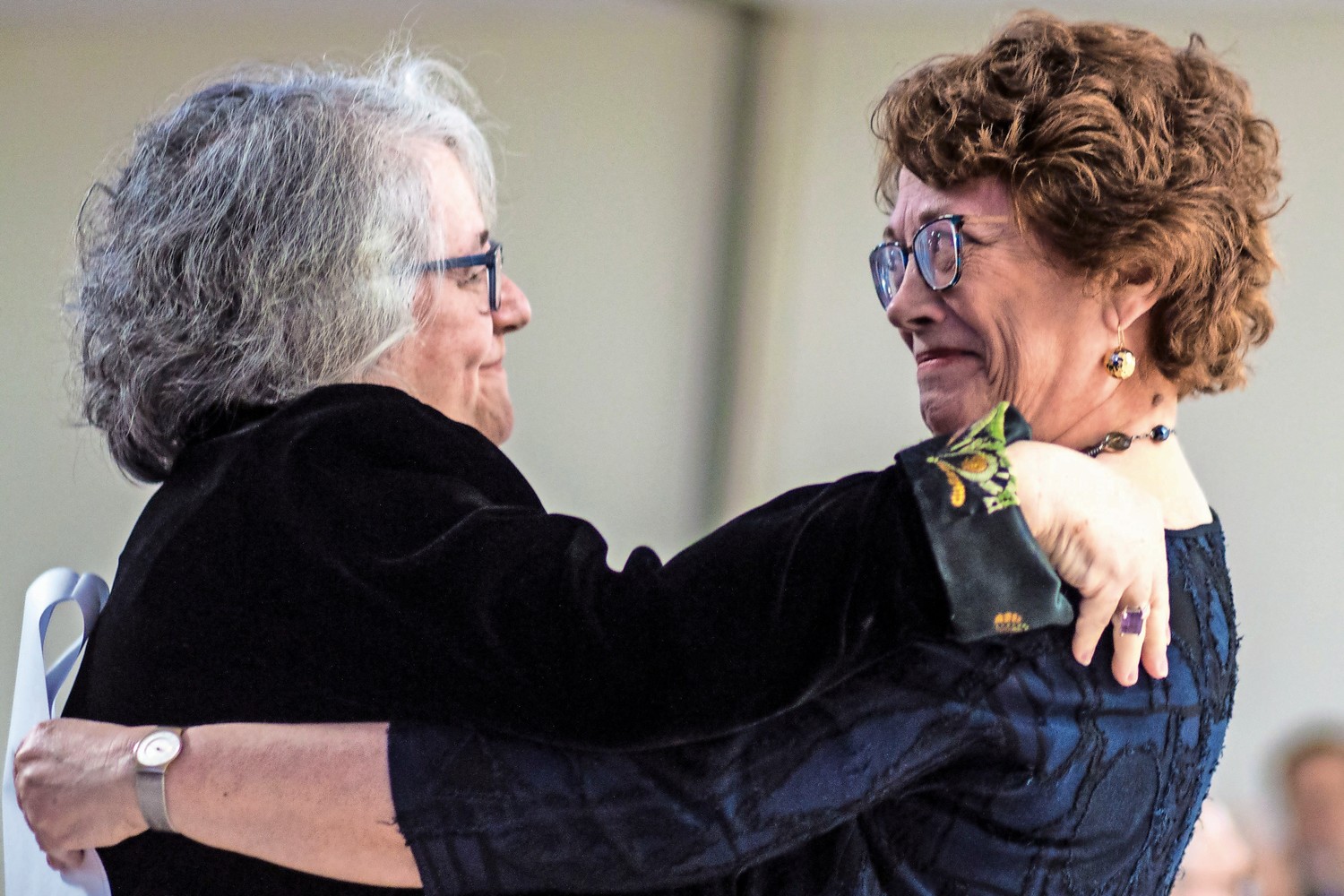 Rabbi Linda Shriner-Cahn, left, embraces Madeline Ritter, who spearheaded the search that installed Shriner-Cahn as the rabbi for Congregation Tehillah in 2008. For her 10 years of service, Shriner-Cahn and her husband David were honored during the congregation's 2018 annual gala at The Riverdale Y on Feb. 3.
AARON MAYORGA 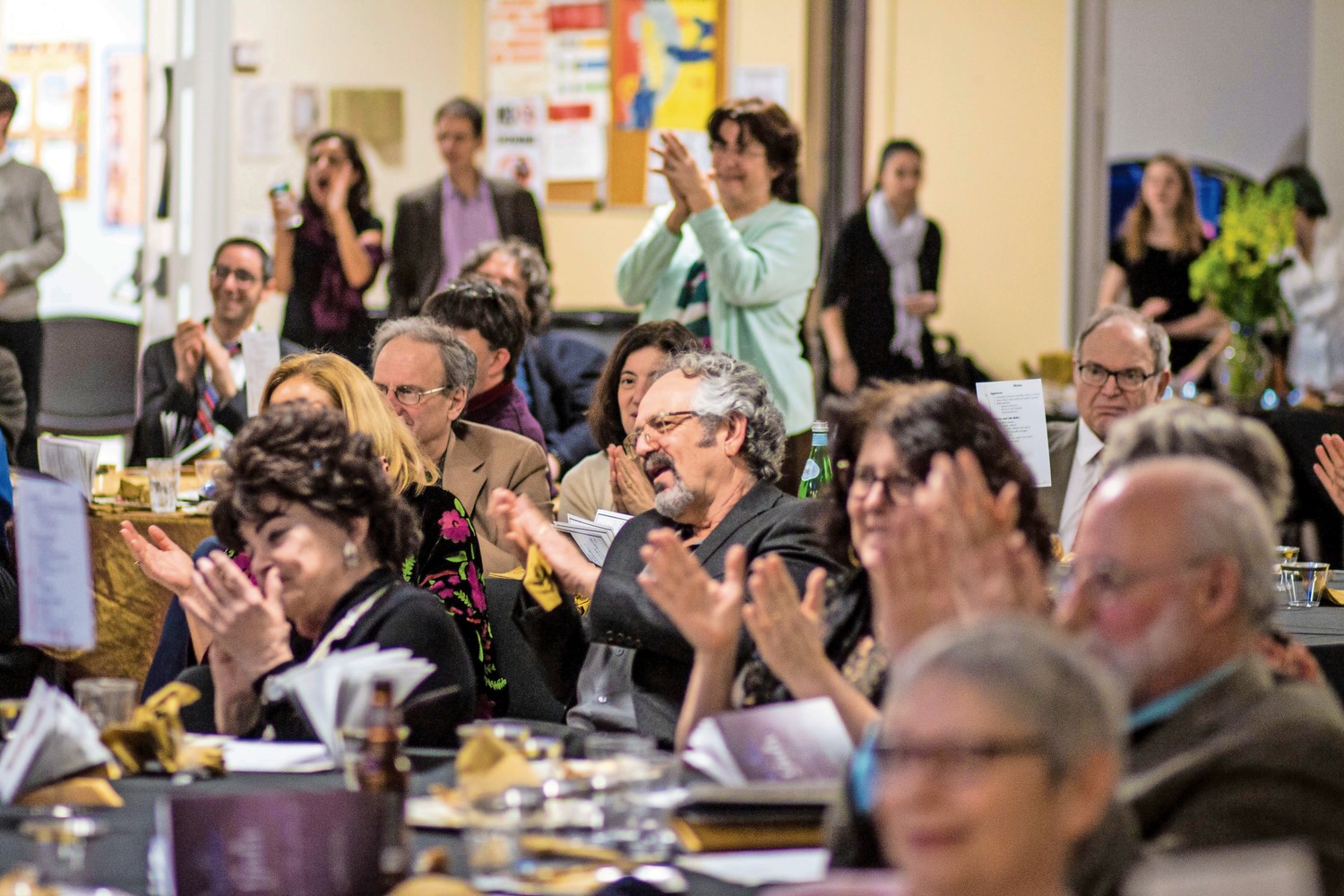 Rabbi Linda Shriner-Cahn receives an ovation from the assembled audience. Shriner-Cahn, who has served as the Congregation Tehillah's rabbi for nearly the past decade, was honored during the congregation's annual gala at The Riverdale Y.
AARON MAYORGA 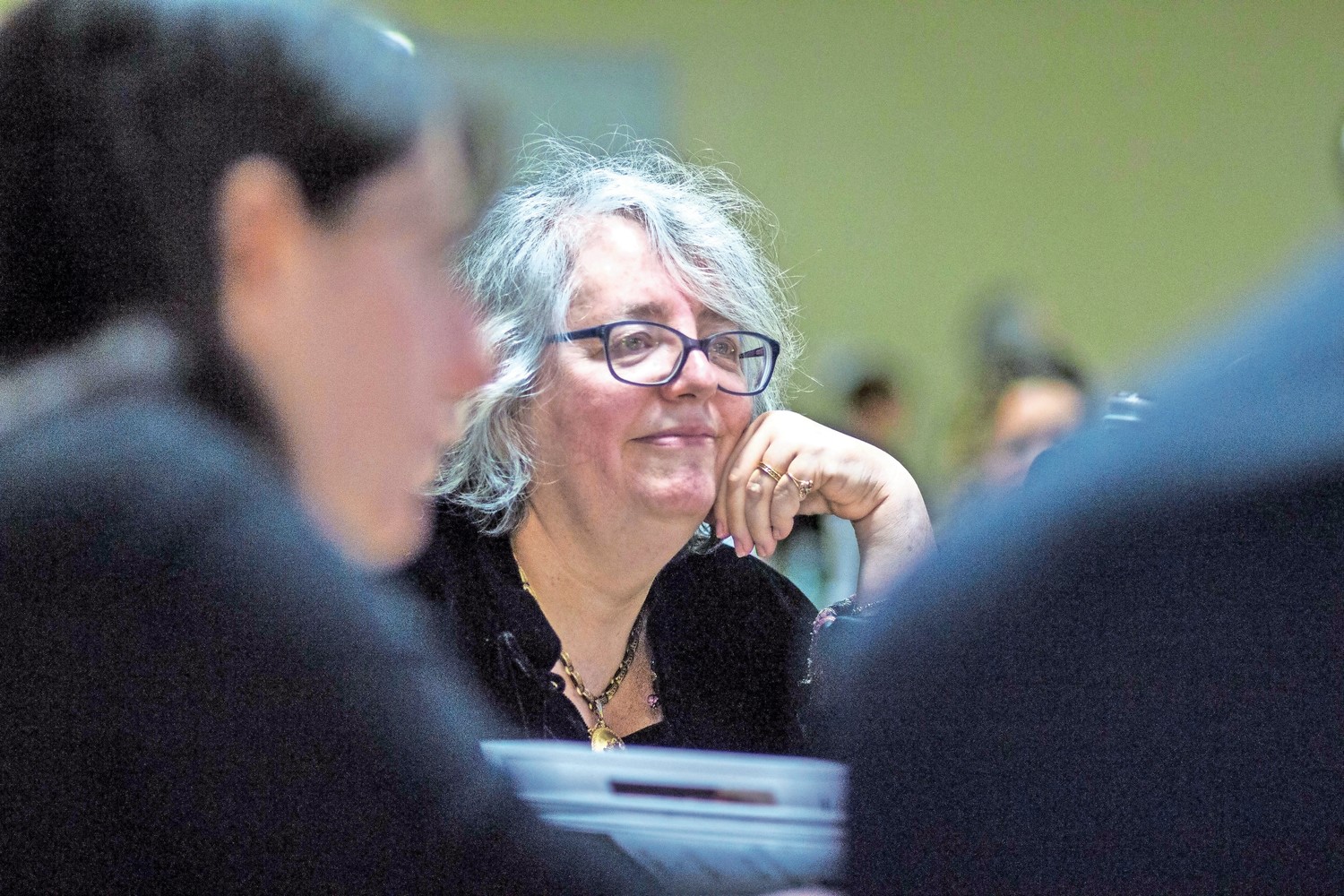 Rabbi Linda Shriner-Cahn, who has led the Congregation Tehillah since 2008, was honored alongisde her husband, David, as part of the congregation's annual gala at The RIverdale Y.
AARON MAYORGA 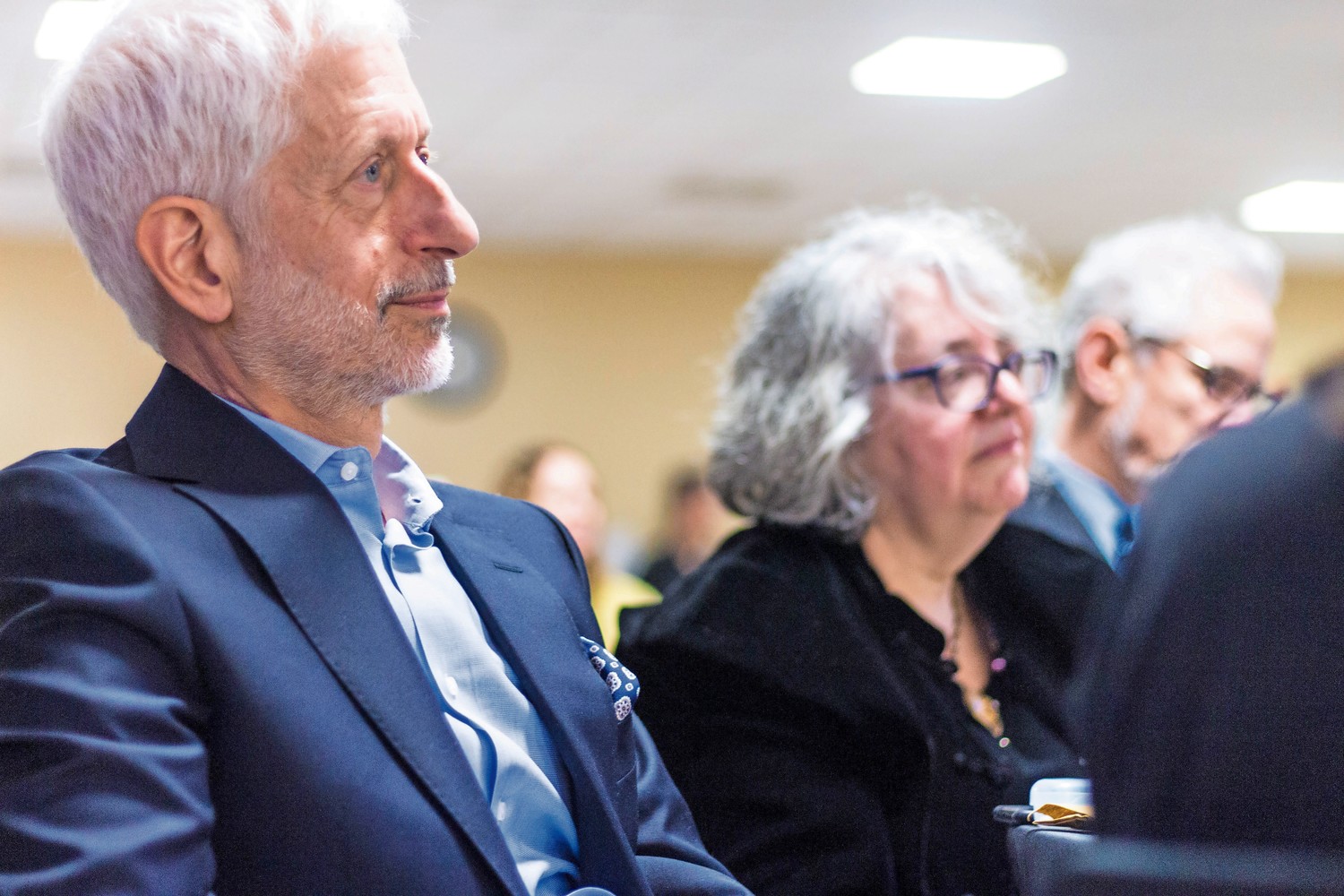 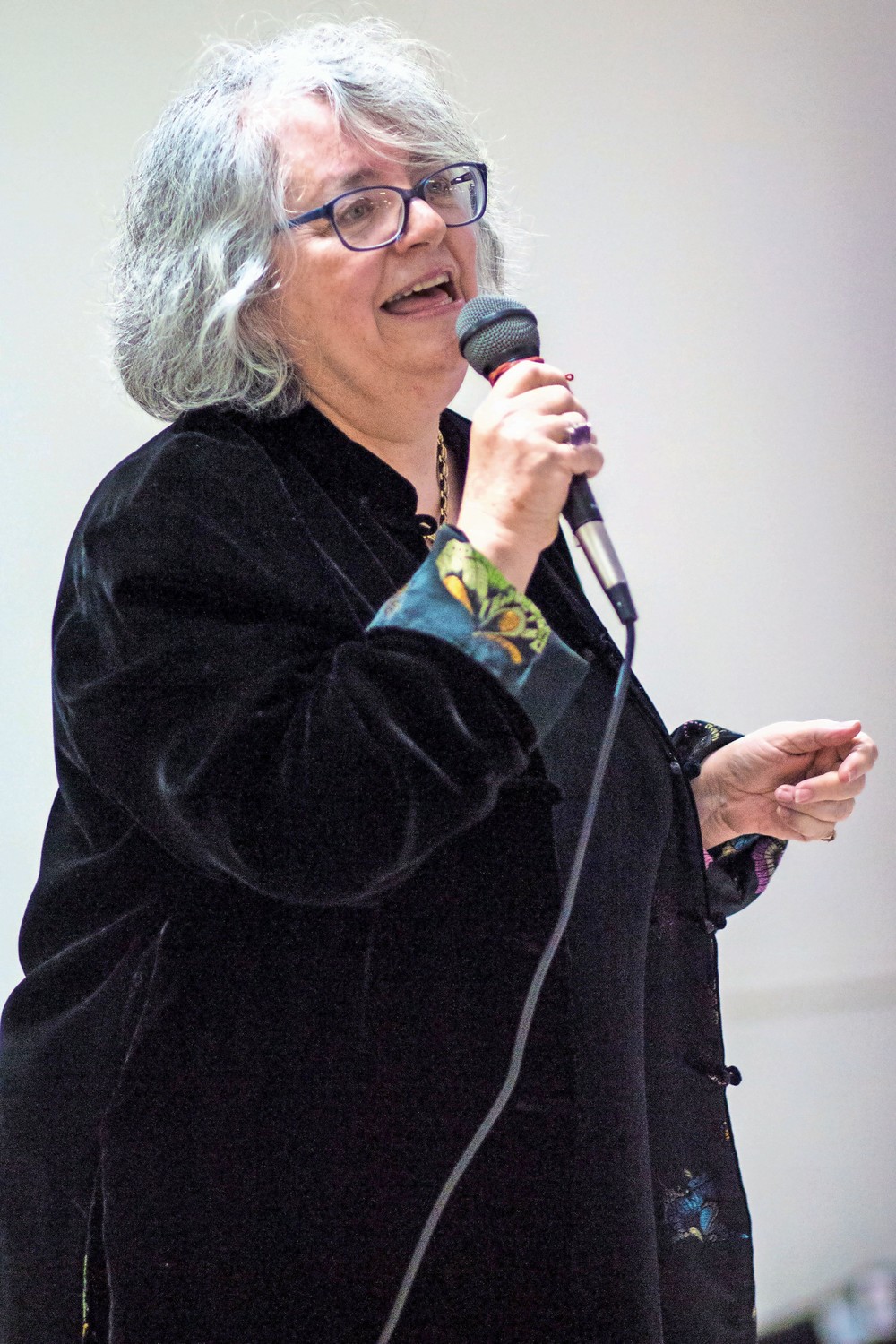 Rabbi Linda Shriner-Cahn sings during a performance with pianist Lee Feldman at the Congregation Tehillah's 2018 annual gala. Shriner-Cahn was honored during the event for her decade of service as the congregation's rabbi.
AARON MAYORGA
Previous Next
By SIMONE JOHNSON

When Rabbi Linda Shriner-Cahn first walked into Congregation Tehillah a decade ago, it felt just like home.

“My co-leaders were two men (who) were married to each other for quite some time,” Shriner-Cahn said. “I hate to have to say that we’re gay-friendly, because to me, it’s like, of course. Why would we even have to say that?”

Congregation Tehillah — which meets at the Riverdale-Yonkers Society for Ethical Culture building on Fieldston Road most of the year — has celebrated diversity since its inception, something that might not be too common among other Jewish movements.

But then again, Shriner-Cahn hasn’t exactly been the most orthodox when it comes to practicing her faith.

In junior high school, for example, she refused to participate in her bat mitzvah because her synagogue would not allow her to fully participate as an adult like her male counterparts could. And Shriner-Cahn sticks to her guns — she didn’t take the Jewish rite of passage until after she graduated from college.

It’s that fiery spirit that makes Shriner-Cahn and Tehillah a good match, according to the synagogue’s co-president, Kathy Schreiner.

And it’s exactly why members of the temple celebrated 10 years with the rabbi during a recent gala at The Riverdale Y.

“She has taken us on a long road to a great place,” Schreiner said. “We are not big, but we are very strong.
“We have a place in the community.”

Shriner-Cahn attributes her spirit to her immigrant parents, who not only endured a major move from China to America, but they also grew up in the 1960s when the Vietnam War and the women’s right movement both were in full swing.

The rabbi’s attention to inclusiveness goes beyond attraction and love.

Shriner-Cahn also reaches out beyond Judaism itself. Inspired by an Islamic women’s conference she attended in Turkey six years ago, Shriner-Cahn built a relationship with a mosque in Parkchester as well as a Muslim school in Yonkers.
“If I don’t know you, I can imagine a lot of things about you,” she said. “But if I sit down with you, the things that divide us become fewer and fewer.”

In the beginning the first programs behind Tehillah and the Muslim community involved their children working together. It was there Shriner-Cahn realized children were truly “the best ambassadors.”

Oftentimes children are not respected as people, she said. As a rabbi, Shriner-Cahn puts a huge importance on inter-generational teaching, believing anyone can teach at any age — and anyone can learn at any age.

It was through Tehillah’s educational program that allowed Madeline Ritter to not only find her spiritual home, but also emerge as a leader. She’s a facilitator for Bend the Arc, a progressive political awareness group that not only advocates for equality, but participates in refugee work through an interfaith coalition.

However, it was a different Tehillah program that brought Ritter together with Shriner-Cahn and her husband David. The Caregiver program is dedicated to taking care of the old and dying — something both the rabbi and her husband participated in when both were losing their mothers, joined by Ritter while she dealt with losing her father.

“It’s a community that’s there for people,” Ritter said.

Although the congregation is close-knit, Tehillah looks to grow beyond its current state in the upcoming year bringing on new people.

“I became a rabbi because I realized I wanted to walk with people on their journey, by their side,” Shriner-Cahn said.

“We have an obligation. Part of the journey is figuring out how do you fulfill this obligation to the community for being here, and that is what motivates me.”