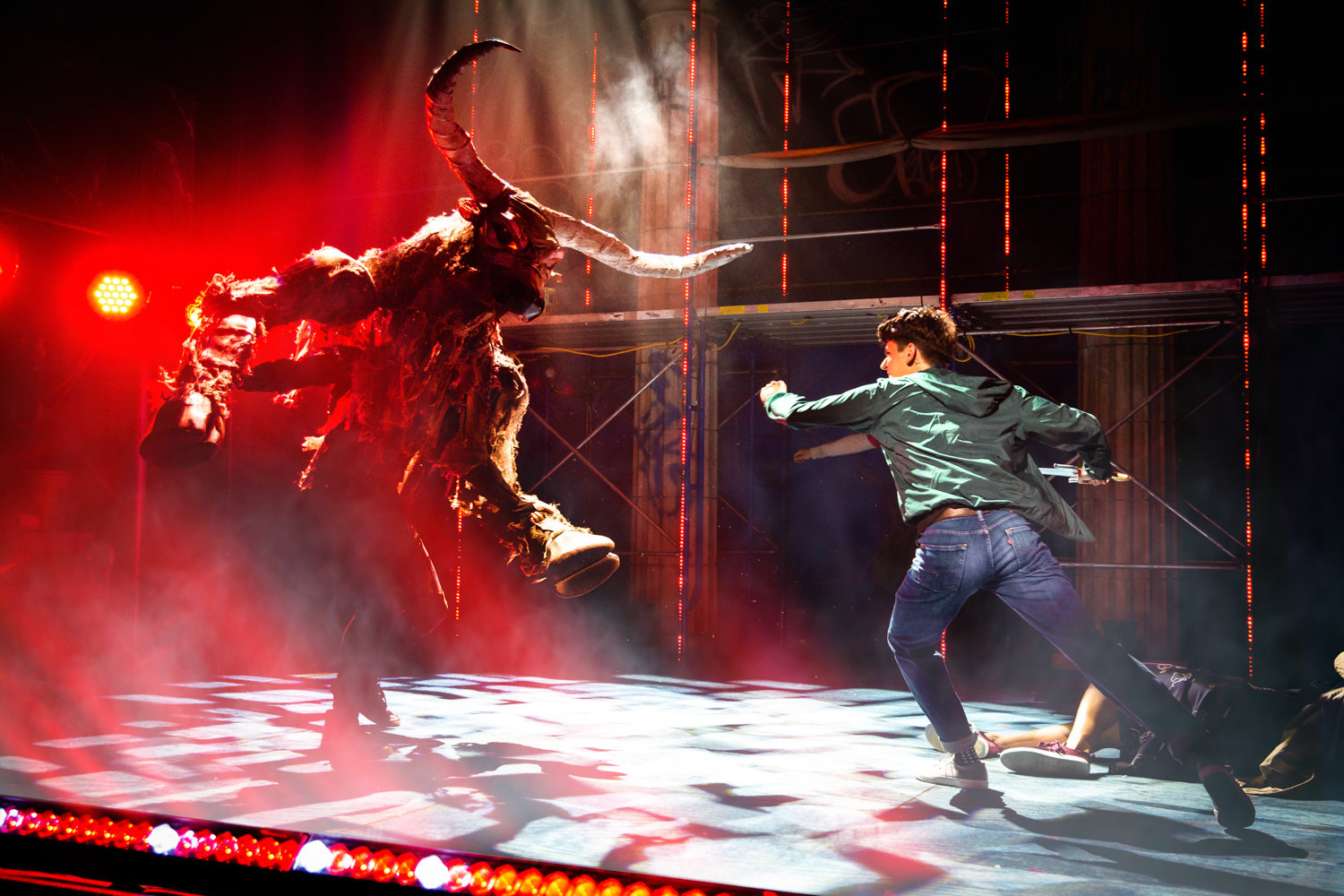 It’s tough being a teen.

That is not news, but it is the starting block for mountains of literature. Shakespeare did a fine job with his attack, as did J.D. Salinger and Mark Twain.

But those gentlemen wrote before the concept of “young adult” came to be, with all of its potential for franchise and marketing.

With 175 million copies of his books in print worldwide, author Rick Riordan rules the young adult category, and in the usual pathway for all blockbusters, a Broadway musical based upon his work has arrived in “The Lightning Thief: The Percy Jackson Musical” at the Longacre.

In a curious twist on its origins in both Greek mythology and oral storytelling, “The Lightning Thief” began as a bedtime story Riordan told his young son, which in itself is a fitting origin for this tale of a boy and the mysteries of his dad.

And so, in “Lightning Thief,” we have a boy and his two pals on a quest for identity and answers in a magical land. Surefire? Maybe not. Remember, it is so very tough to be a teen. They whine, they bicker, and they have trouble with focus. And then there are the obstacles.

Monsters lurk in this mythical realm, an alternate version of the United States, along with some sketchy characterizations, furious music, nightmares, and cornball jokes. Luckily, however, all is not lost. Ryan Knowles and Jalynn Steele spin gold here, each in a cavalcade of multiple characters — wacky to soulful — in spirited performances. You will find yourself waiting and hoping for their next entrances.

Another standout is David Lander’s lighting design, a spectacular display of LED finesse.

Our plucky trio (boy, girl, boy), however, has to negotiate the plot, some hectic, angry songs, and the slippery confines of Greek mythology, specifically the challenges faced by Perseus, revamped here as the son of Poseidon.

Our main character, you see — Percy Jackson — is based upon Perseus, and has his destiny: To slay the minotaur, behead Medusa, rescue his mom, stay in school, resolve the dad questions, and clear his name. The plot mashes up the ancient stories of Perseus and Theseus, but why quibble since the show is such a mash-up anyway with generous portions of whimsy, teen angst, rock, puppetry and other spectacles.

A shout-out is due to whoever reconceived leaf blowers into engines of celebration.

Chris McCarrell plays Percy, and once launched on his mission of self-discovery, he charges through the songs, dancing, stage combat and dialogue in full-out action hero mode. And his pals, Kristin Stokes and Jorrel Javier, are also sprinting, which tilts their work into strident, hyperventilated territory.

That’s unfortunate. But then, overdoing it is also a big part of growing up.

The show is headlong and furiously paced, with 19 songs and plenty of quirky dance numbers for the ensemble of seven. Director Stephen Brackett keeps the throttle wide open, making “The Lightning Thief” a brisk and lively option for the young adult audience.