Thanking veterans for service in more ways than one 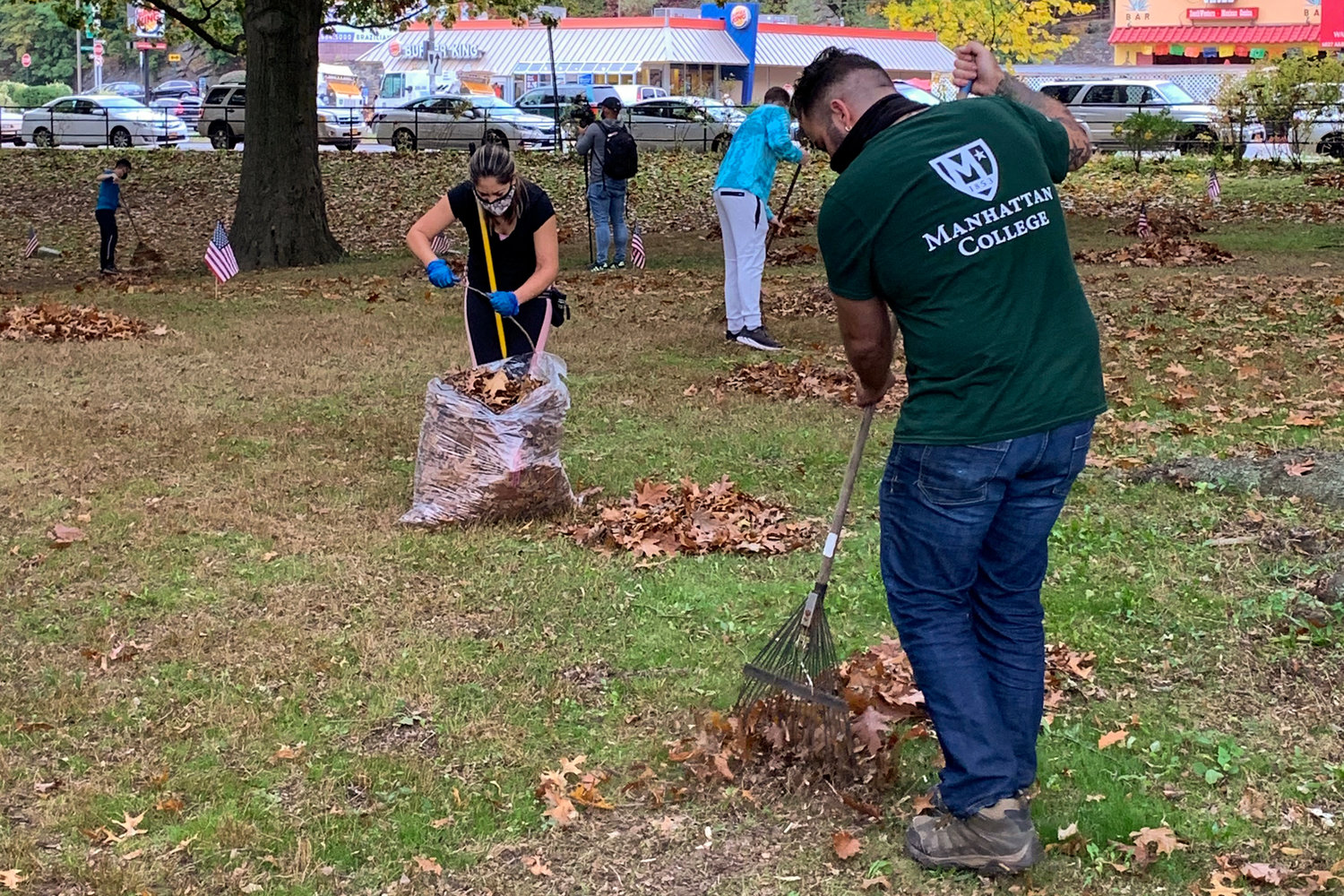 Members of Manhattan College’s Student Veteran Organization say some of their favorite volunteer experiences included doing clean-ups of Dogwood Junction near the school’s campus, as well as at Memorial Grove in Van Cortlandt Park last year. It was those efforts and more that earned them the top service award from Community Board 8, named after longtime neighborhood advocate Irving Ladimer.
Courtesy of Student Veteran Organization 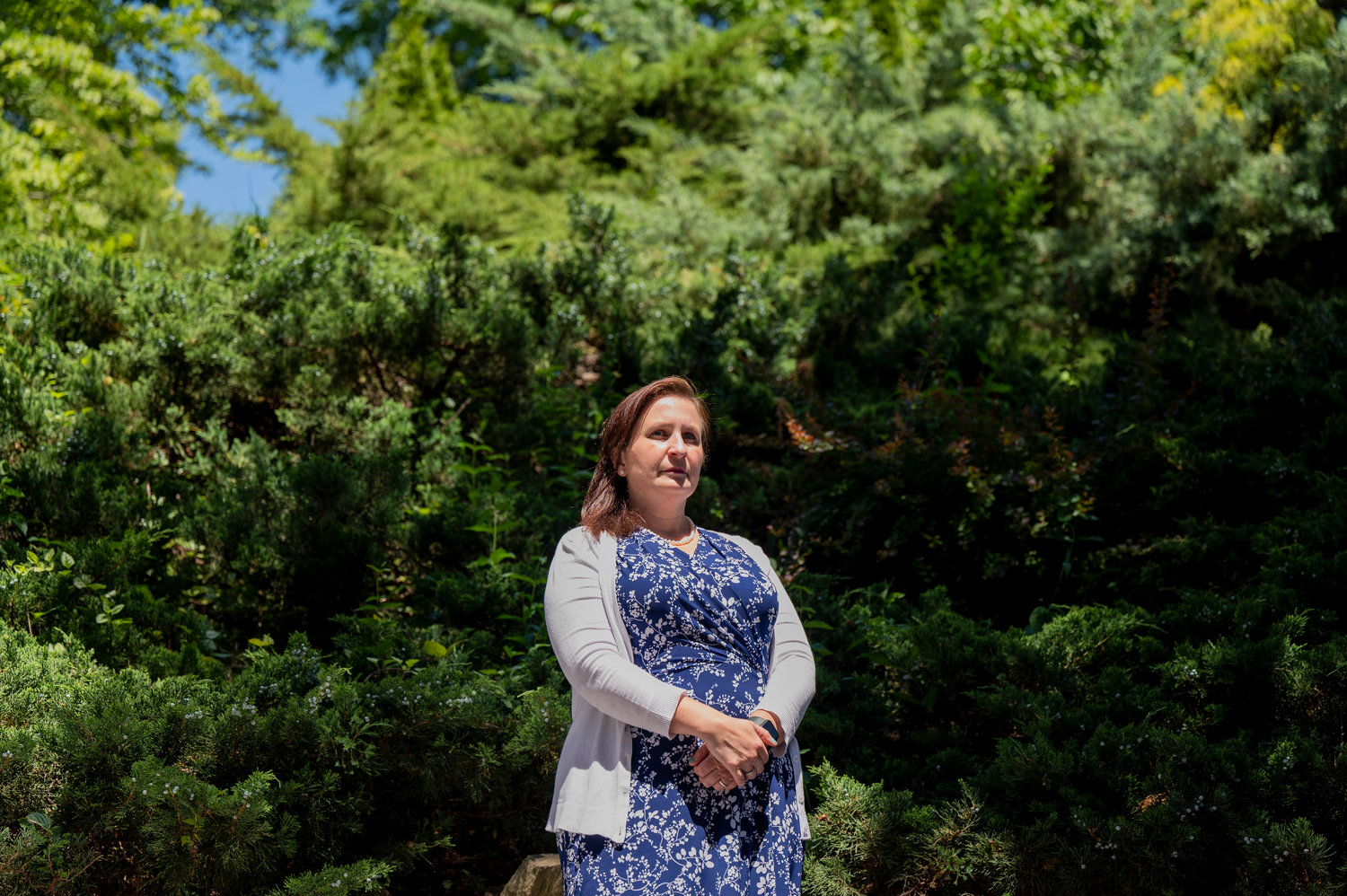 Tiana Sloan, the administrator of the student veteran center on Manhattan College campus, says the campus veterans are constantly trying to find new ways to help people in the community. Those efforts were recognized recently by Community Board 8, earning the organization’s top service honors — the Irving Ladimer Award.
HIRAM ALEJANDRO DURÁN 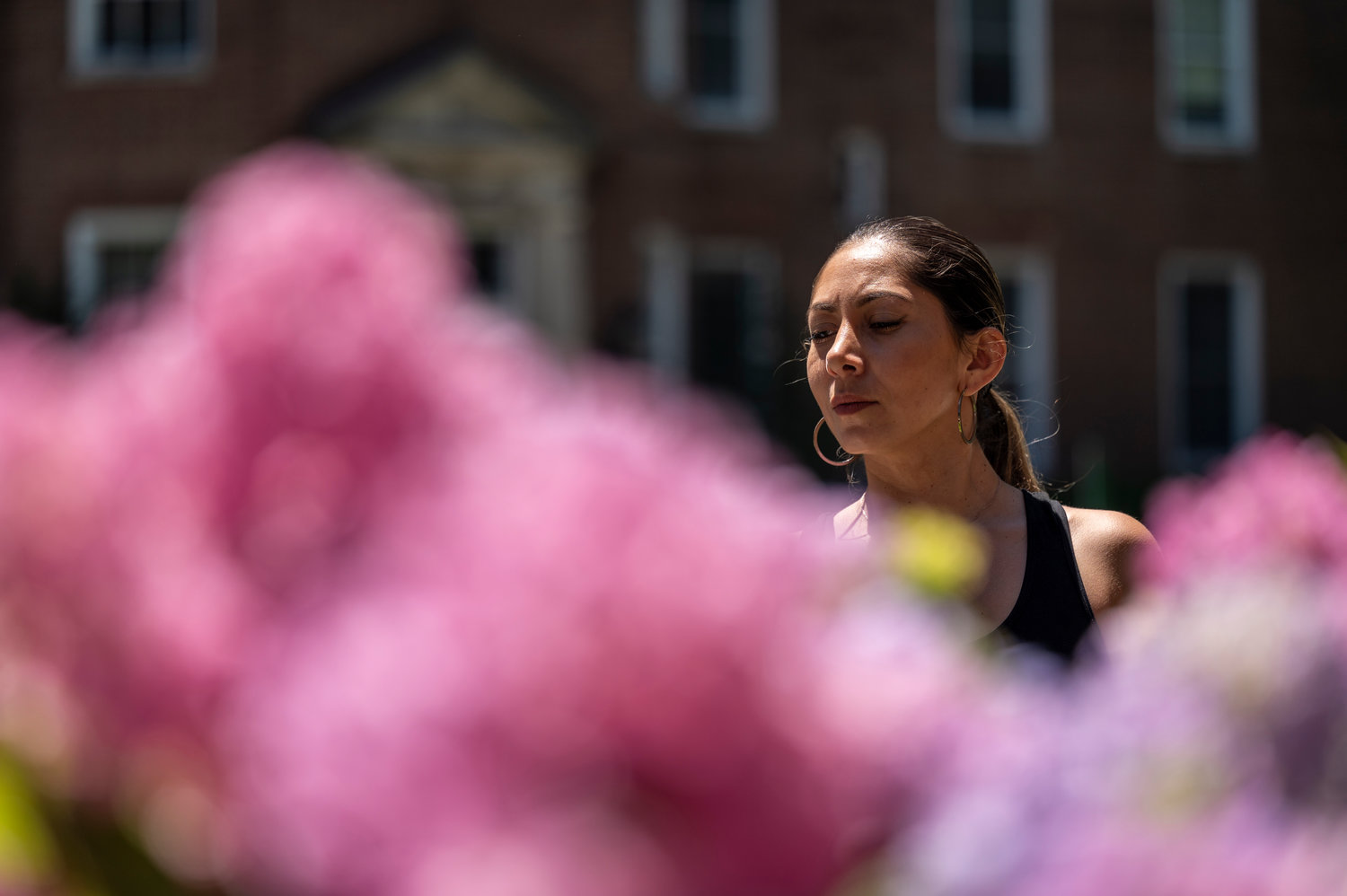 Student Veteran Organization president Andrea Toral Merchan says the coronavirus pandemic caused some difficulty for the Manhattan College group as they couldn’t always meet in person. Yet they still managed to complete many of their goals, on a their way to earning Community Board 8’s Irving Ladimer Award.
HIRAM ALEJANDRO DURÃN 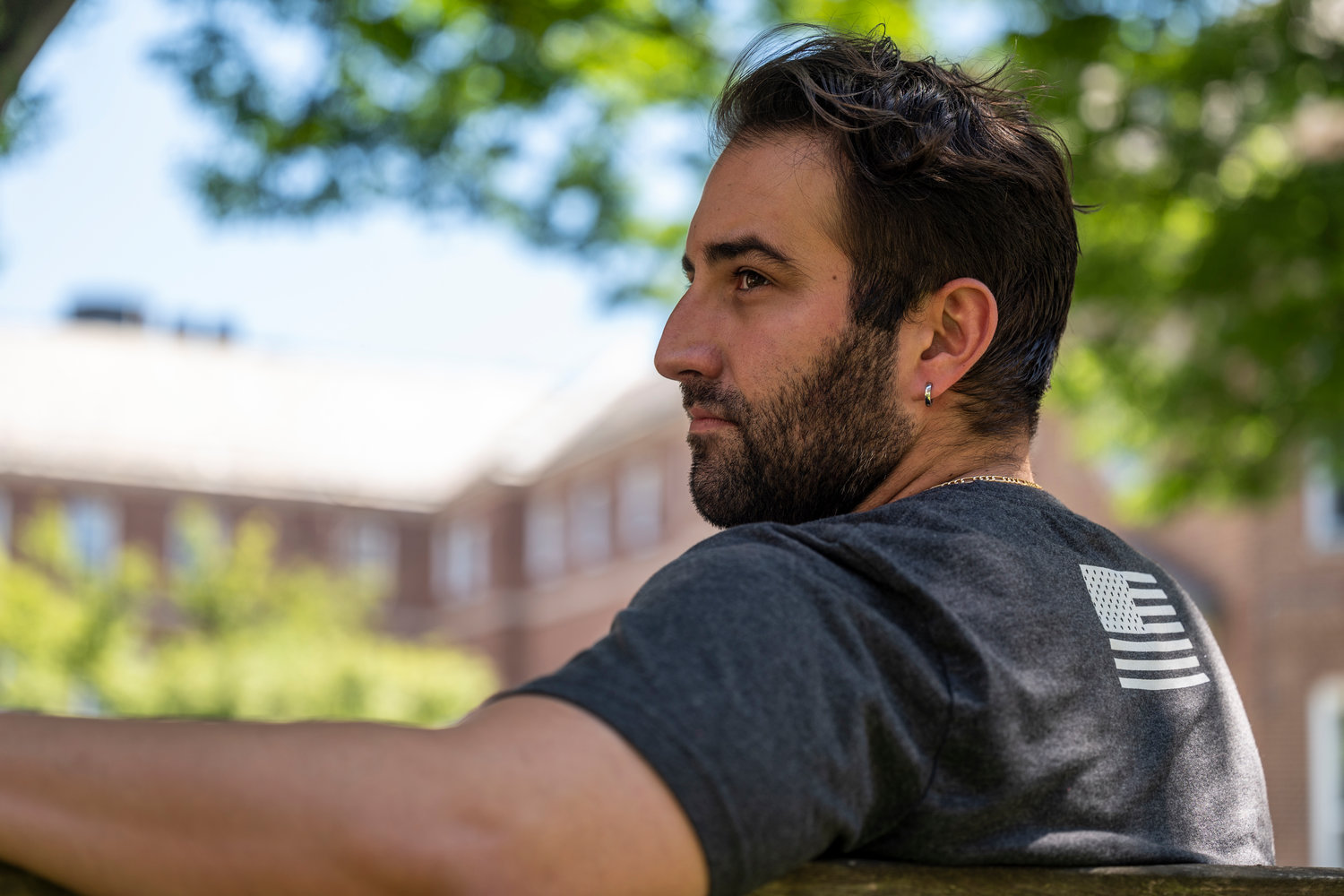 Chris Norberto, the treasurer of Manhattan College’s Student Veteran Organization, was surprised by Community Board 8’s recognition, saying he didn’t expect to win the Irving Ladimer Award. Ultimately, he feels the work they do is not about recognition, but more about veterans finding a community on campus where they can do good.
HIRAM ALEJANDRO DURÁN
Previous Next
By JILLEEN BARRETT

Between cleaning up parks, hosting collections for Toys for Tots, organizing blood drives with the American Red Cross, and helping those in need whenever possible, the Student Veteran Organization at Manhattan College stays busy.

But Community Board 8 recently asked those hard-working members to make time for one additional event: An ceremony honoring them with its community service award named after Irving Ladimer.

While there is plenty of credit to go around, a good chunk of it belongs to Tiana Sloan, according to the group’s members. She’s the administrator of Manhattan College’s veteran center who also serves as the organization’s faculty advisor. Sloan is married to a veteran, and has worked in the college’s veteran center for more than three years.

“It was interesting to me that (my husband) had things he was dealing with that I wasn’t used to with civilians,” Sloan said. “It definitely piqued my interest for me in dealing with veterans.”

The veterans group is an interesting one, she added, because its members always try to do more service to their country despite having already served their country.

“They don’t look at it like, ‘Oh, I did my job, I’m done,’” Sloan said. “Now they’re looking for what’s their next mission. What’s the next cause, and what are ways that they can be helpful? And so it’s all about continuing for, ‘What can we do?’ And I think that’s been something amazing (with) the student veterans, even before we officially had this as a program.”

Some of the more memorable efforts involved cleaning Memorial Grove in Van Cortlandt Park — an area set aside to honor those who died in service of various wars — as well as Dogwood Junction at Broadway and Manhattan College Parkway. Despite following strict coronavirus protocols, the vets collaborated with other groups such as the Jaspers men’s basketball team and the U.S. Air Force ROTC Detachment 560.

Herb Barret, a U.S. Marine Corps veteran, had originally brought attention to Memorial Grove when he noticed some years ago that part of the park was in a dismal — and disrespectful state.

He not only cleaned it up, but also would host Veterans Day remembrances at the site.

Andrea Toral Merchan, the veteran organization’s president, didn’t even know the grove existed, much less realize it was right across the street from the college’s campus. Helping clean Memorial Grove reminded her of her own service — for America.

“It kind of brings some flashbacks to when we were in the military,” she said. “But at the end of the day, it was very rewarding.”

Chris Norberto, the group’s treasurer, is particularly interested in the chance to do more service now that the organization’s name will be more recognized by the larger veterans community in the area.

“It was definitely a nice surprise,” he said. “And it’s not for the recognition. It’s honestly, I feel like just getting this nomination, the word itself opens up more doors for us to do more community service.”

The award is named for Irving Ladimer, who died just before the Fourth of July in 2018. He was 102. Ladimer joined CB8 in the 1980s, and stayed on the board right up to his passing. He was known for not only his volunteer efforts, but also his work welcoming new members to the board, including a “layman’s manual” that explained all the ins and outs of being a part of that larger volunteer community organization.

Barret, on the other hand, offered Norberto and the rest of the group an opportunity not only to be of service to fallen soldiers, but connect with other veterans whom they may not have otherwise known. Meeting Barret was part of what made the event interesting.

“A big thing that we want to do too is reach out to the older veteran organizations, you know like the American Legion, the” Veterans of Foreign War in the United States, Norberto said. “There’s a big gap between the older veterans and our generation of veterans.”

Barret was a Korean War veteran, but so was Norberto’s grandfather — also in the Navy. “It kind of goes back to what I said about closing the generational gap.”

Like war, the pandemic lingered in the background of everything the veterans organization did over the last 18 months or so, even as they tried to move their attention from events specifically created for veterans to community service that could be performed with other groups. That transition worried Toral Merchan at first.

But with the help of masks, and a lot of heart, she’s glad the college group was able to make such a difference.

“I’m grateful,” Toral Merchan said. “It’s not about being recognized, but we’ve been working on this for so long, and now finally somebody sees it.”