The ancient organisms that lived beneath ancient trees 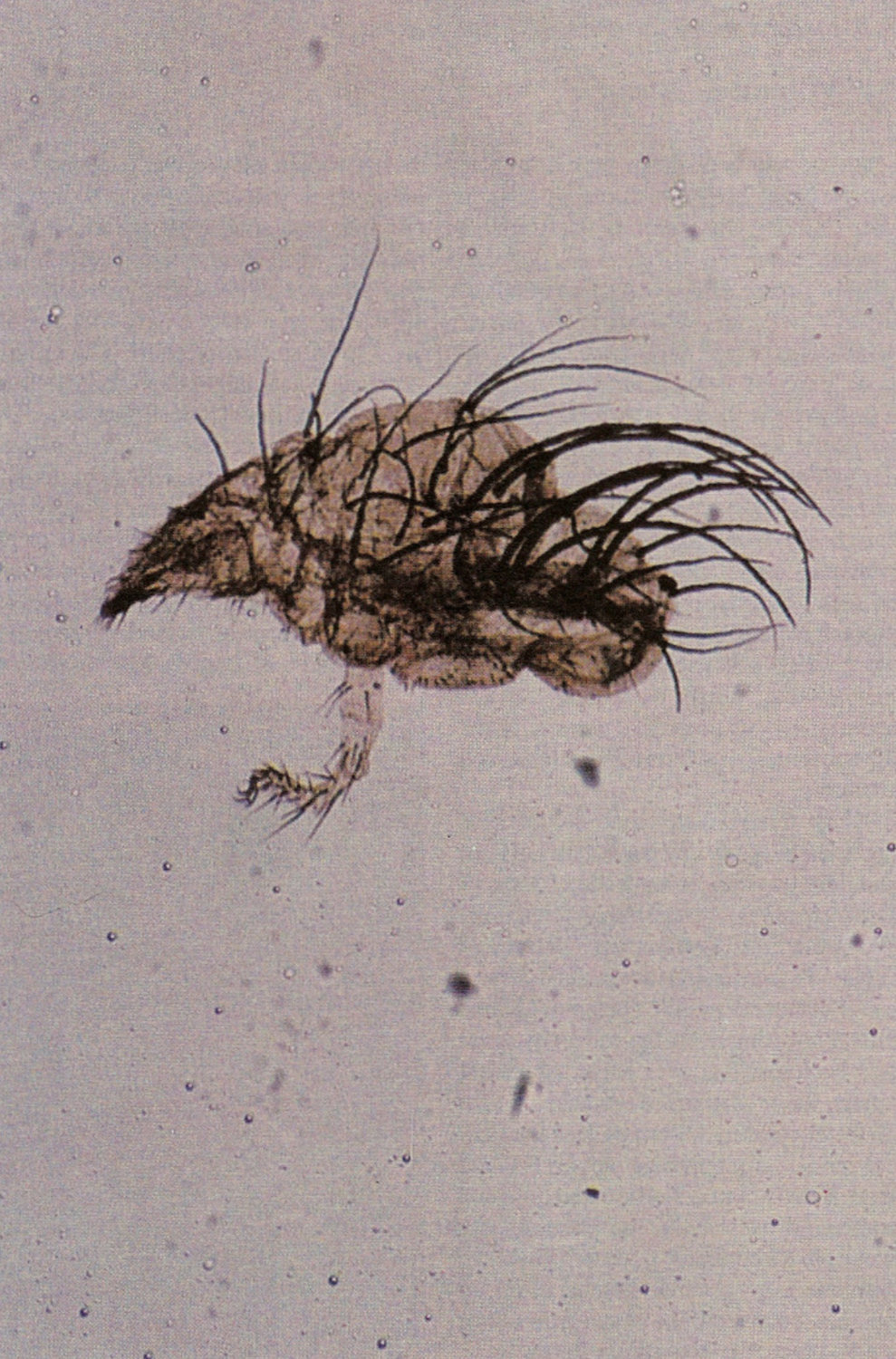 Some of the most interesting finds when it comes to ancient organisms are the vast number of arthropods, like this 370-million-year-old mite.
Courtesy of William Shear
By SURA JESELSOHN

In that faraway time when Eospermatopteris and Archaeopteris were growing mere miles from Riverdale, there were many other critters living in the same neighborhood.

While the Devonian seas were heavily inhabited by a large variety of fish and reef-building coral, we are going to train our focus on the “forest” floor of Gilboa and peer into the leaf litter and soil for the resident organisms living in proximity to our now-familiar Eospermatopteris and Archaeopteris.

On this journey, I have been guided by William Shear, emeritus professor of biology at Hampden-Sydney College in Virginia. His initial scientific interests focused on contemporary arthropods, particularly the cryptozoa — those hidden and tiny animals that live in leaf litter and the soil underlying vegetation. He concentrated on the Myriapoda — millipedes and centipedes.

The scientific name, Arthopoda, hints broadly at one of the identifying characteristics of the phylum. The Greek arthron means a “joint” (think arthritis) and pod meaning “foot,” a Latinized form of the Greek podion, meaning “little foot.”

The basic characteristics of the phylum include paired and jointed appendages, segmented and bi-laterally symmetrical bodies, cold-bloodedness, and rigid exoskeletons made of protein and chitin (a carbohydrate compound), with the occasional addition of calcium carbonate. An exoskeleton requires molting when the animal outgrows its outer protective cuticle.

Today’s common arthropods include creatures such as spiders and bees as well as shrimp, lobsters and centipedes (subphylum Crustacea).

Well might you ask, “How does one isolate such tiny creatures?” The answer is the ingenious, low-tech Berlese Funnel. In essence, forest litter and/or soil is placed in a funnel above a filter designed to hold back the bulkier soil elements. A light source is placed over the loaded funnel and as the soil material heats up and loses moisture, the animals seek respite by migrating downward, away from the heat. Due to their small size, they fall through the filter into a catch basin. From there, they can be collected and examined.

Before continuing, you need to learn about the Rhynie chert and the fossil found there. Chert — essentially flint — is a sedimentary stone made up of fine-grained quartz crystals. Rhynie is a village in Aberdeenshire, in northeastern Scotland, where an extensive fossil bed containing primitive plants, lichens, algae, fungi and arthropods from approximately 410 million years ago (early Devonian) were extremely well preserved. The beds were formed from silica-rich waters from the local hot springs that overflowed and encased surrounding flora and fauna forever. The same process occurs today in Yellowstone.

The initial discoveries were made during excavations conducted between 1910 and 1913 by William Mackie. The plant material was examined and shared with the scientific community by Robert Kidston and William Henry Lang between 1917 and 1921. For our purposes it is important to note that all the land animals from the Rhynie finds were arthropods!

In  1981, Shear found his scientific interests abruptly changing directions from the present to the past. He had fortuitously met W.D. Ian Rolfe, then at the Hunterian Museum in Glasgow (Scotland) who showed him photomicrographs of animals from the Gilboa materials from 375 million years ago that looked remarkably similar to modern cryptozoa.

These materials were found by two paleobotanists from the University of Binghamton — Patricia Bonamo and James Douglas Grierson. Those Gilboa materials yielded 11 specimens representing four species of oribatid mites (still considered today as major components of the soil food web), a millipede ancestor, trigonotarbids, centipedes, and some remains that seem very insect-like.

Shear is very insistent, however, that while the animal finds do resemble insects, it has not been scientifically determined that they are true insects. It also is unclear whether any true insects were present in the Devonian.

These Gilboa cryptozoa finds were living among low-growing plants such as Leclercqia — a club moss — and various liverworts and other mosses.

These finds include a proto-spider named Attercopus. While it did not have spinnerets, it did have spigots from which silk was extruded. There is no evidence that it spun webs, but may have used its silk to wrap its eggs for protection, to use as draglines, and to construct the walls of its burrows.

The tiniest fossil is that of a false scorpion (class Arachnida), nicknamed “Angry Dragon” for its array of tiny but vicious cutting “teeth.” Ten species of trigonotarbids — also found at Rhynie — were also spider-like.

In common with spiders, they breathed through book-lungs, a set of leaf-like plates each having a blood filled cavity (oxygen diffusing through the leaf walls) enclosed within the abdomen. Unlike spiders, they had armored bodies and did not spin silk.

I think it’s time to bid farewell to Gilboa and return to a more contemporary topic in my next column!