The artifact still fits in Shakespeare’s ‘Timon of Athens’ 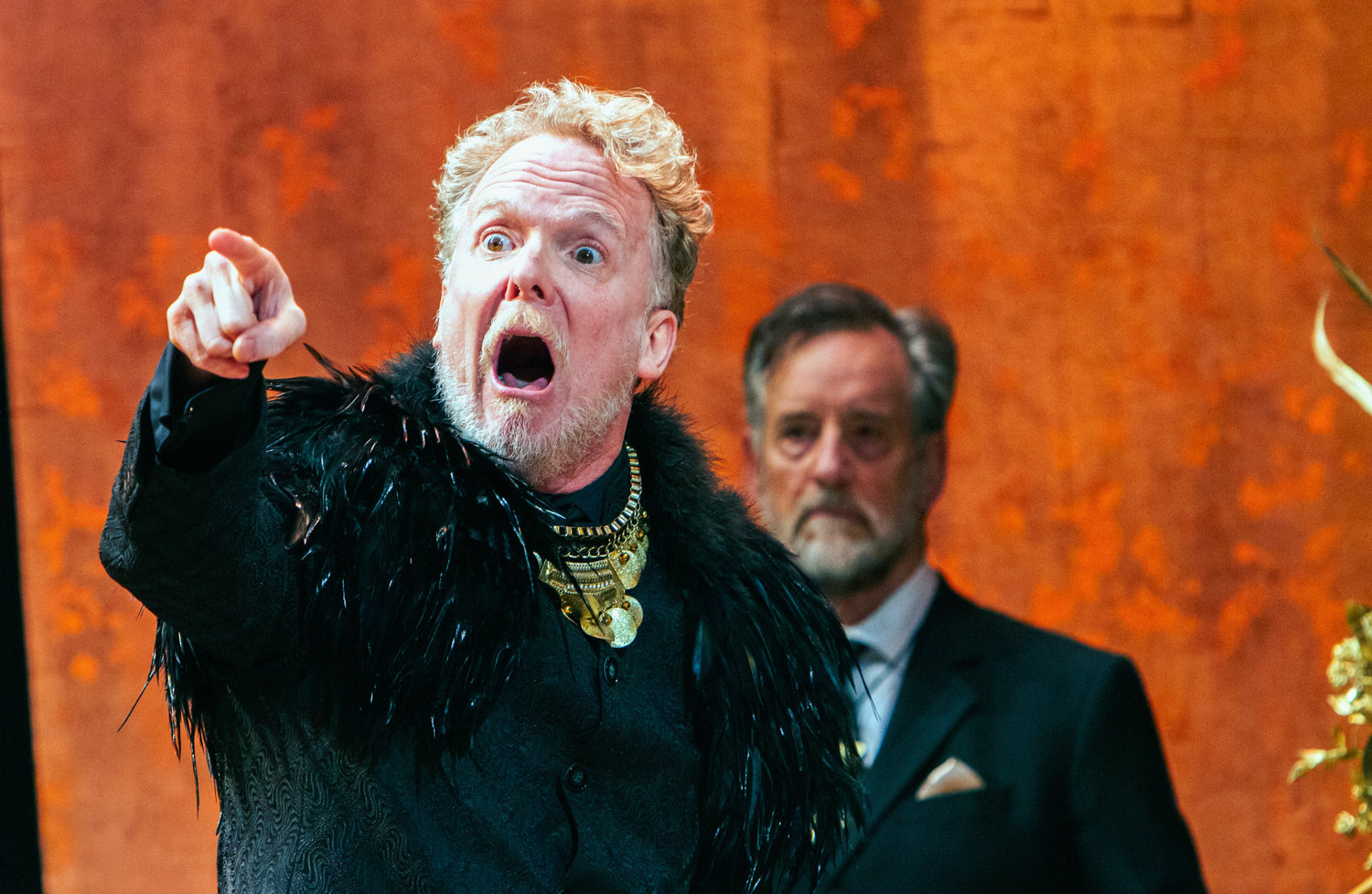 What to make of “Timon of Athens”?

Maybe Shakespeare was on the skids when he wrote it. You couldn’t exactly call 1607-09 a hot streak when “Coriolanus,” “Timon,” “Pericles” and “Cymbeline” first hit the boards.

And, of all things, the bard needed a script doctor. Can you imagine? The program for the new Theatre for a New Audience production at the Polonsky Theatre Center in downtown Brooklyn gives co-authorship of the play to Thomas Middleton. We’ll get back to him.

A refresher: “Timon of Athens” is the one where a rich guy goes broke, cusses out everyone in town, and moves into a cave.

Director Simon Godwin dials up a wiley confection here. The outrageous sycophants and frauds seem up to date, and the contrasts between life at the top and the travails of the dispossessed are rendered in full. From a glittery perch, Timon literally returns to earth.

Godwin and his fervent ensemble are always on course, along with Soutra Gilmour’s costume and scenic designs, and Michael Bruce’s rousing music. The choices unify this energetic cavalcade of greed, resentment and bile.

The look and the sound always fit, and — extreme or not — there’s something familiar going on here, where hypocrisy and the greed rule the day, and people are turning desperate.

Glorious torrents of invective color this journey as well, in which the noble Timon bolts into dire straits, and turns from philanthropy to misanthropy.

A choice to switch genders so that women play key roles here, and to play them as women, works seamlessly, given the heroic performance of Kathryn Hunter in the title role. Hunter is a dynamo, in full command, so that the wild swoops of reversal and fortune are unquestioned. Her gravelly voice suits the portrait, as both aristocrat and hermit.

Timon’s arc of character is a sort of double helix. Generous Timon grapples with selfishness in a time of need. Timon rejects society, but cannot escape fame. Timon desires nothing, but wealth finds her. She flees mankind, and discovers the civilization of nature. She escapes from the greed and hypocrisy of society, and finds kindness and care seeking her out.

Director Godwin edited this version, along with Emily Burns. The notion that Shakespeare collaborated with his contemporary, the playwright Thomas Middleton, is based upon the gaps and inconsistencies of the First Folio, and the belief that Shakespeare actually tucked “Timon of Athens” away in a drawer for a time.

The play is a real curio, and a good deal of the fun is witnessing Shakespeare anew, as something to discover for the first time.

But, as I heard my neighbor say from across the aisle, “Who is this Middleton fellow? He’s not in the program.”

Inclusion of a note about the apparent collaborators could have added some worthwhile context to this rarely performed gem. With the pedigree of this version, first staged by Godwin at the Royal Shakespeare Company — and then at Washington’s Shakespeare Theatre Company — this gap is a surprise.

That quibble notwithstanding, this generous production — with its bold choices and consistent approach — illuminates a problematic “lesser tragedy.”

And the echoes of gold’s allure and idolatry ring true as ever. Was greed ever good? “Timon of Athens” gives one eloquent answer, as both a vision and a warning.

'Rent' is due for an outdoor show

Inwood Film Festival looks to future for sake of creativity

Innocence is lost in Leegrid Stevens’ ‘A Peregrine Falls’