The city, the classroom and Eric Adams

Brooklyn BP likely to be mayor, putting him in charge of 1.1M students 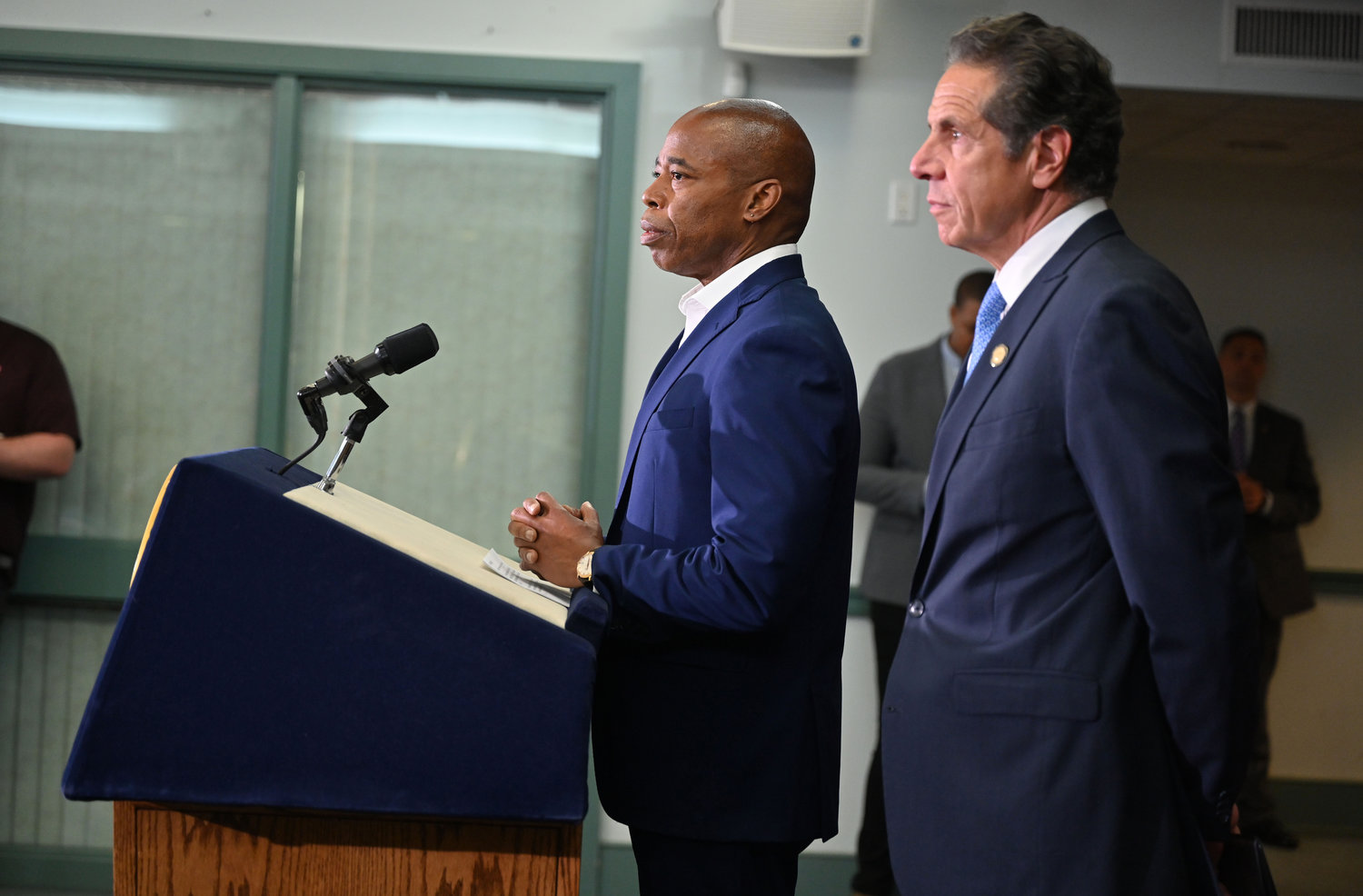 Eric Adams will likely be New York City’s next mayor. And now, more than ever, his education policies will be crucial as he’s set to take the helm of the nation’s largest school system in what is hoped to be the aftermath of the coronavirus pandemic.
Courtesy of Office of Gov. Andrew Cuomo/Kevin P. Coughlin 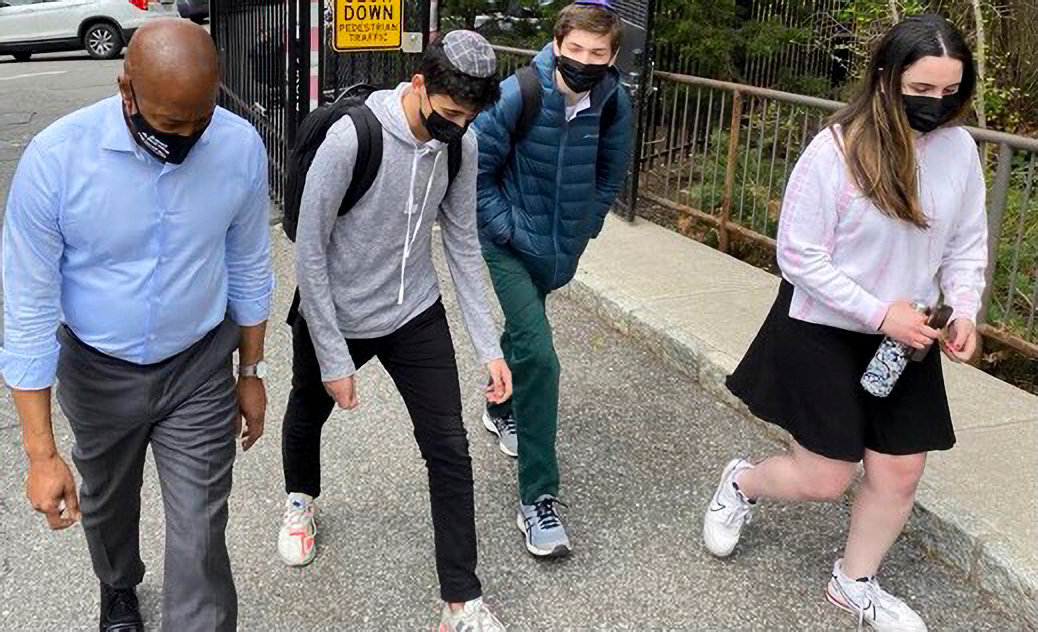 Prior to his victory in last month’s primary, Eric Adams visited SAR Academy and spoke briefly with leaders SAR High School’s elections, politics and governance club that had stopped over. One of its co-founders, Eytan Saenger, looks forward to holding Adams to his campaign promises, particularly when it comes to young people.
Courtesy of Eytan Seanger
Previous Next
By ROSE BRENNAN

The upcoming academic year will likely be one of particular importance as the city begins to recover from the coronavirus pandemic. But not even halfway through it, someone new will take up the helm of the nation’s largest public school system.

That person will more than likely be Brooklyn borough president Eric Adams, who recently claimed victory in the city’s Democratic mayoral primary. And since the city is solidly blue, odds of his Republican rival Curtis Sliwa winning in the November general election instead are slim.

Here, the mayor not only runs New York City, but also controls its public school system, giving him final say over any and all decisions impacting it. And while the mayor might take advice and input from teachers unions or a schools chancellor, at the end of the day, what the mayor says goes.

So, what does Adams have in store for schools?

Central to his education policies is something Adams calls the “whole-child approach.” In short, that means moving away from standardized testing as the preferred way to measure student progress.

“In the city school system, evaluations of our students mostly stop at grades and test scores,” according to Adams’ campaign education plan. “We often ignore critical challenges impacting their performance such as learning disabilities, health care and trouble at home. If we are going to be truly successful in providing a quality education to all young people, we have to look at the whole child and provide what they need to succeed.”

To Adams, that means identifying and supporting students with disabilities, providing students with healthy meals at school, and establishing mindfulness and meditation practices in the classroom.

Adams also hopes to “de-emphasize” testing culture in schools, which he differentiates from abolishing it completely. In the long-term, Adams wants to work with state lawmakers to have high school diploma requirements reflect this de-emphasis as well.

Sadly for students, quizzes and tests will still be a part of an Adams administration, but he also says it won’t be the focus.

“While the next administration won’t throw away the necessary tool of standardized testing, the DOE should go above and beyond to celebrate innovative approaches to education,” according to his education plan. “The experiences that drive sincere engagement with education are not derived from standardized testing, they come from holistic active learning experiences students have with their classmates and teachers.”

But the onus of finding innovative approaches to learning won’t fall solely on the city’s education department. Adams has a few ideas of his own up his sleeve already. For instance, he wants to expand the educational offerings into the summer months as he finds leaving school buildings empty during those months somewhat archaic.

“Three hundred years ago, when children worked alongside their families on an agrarian calendar, it made sense to take a few months off a year to tend to the crops,” Adams said through his education plan. “Those days are long over. By greatly expanding summer school options, we can much better use our education infrastructure by creating more flexibility for parents in how — and when — their child receives their education.”

So what does Adams hope these summer schools will provide for students? For one, child care, as many parents are still working throughout the summer. He also hopes the schools can provide soft skill instruction and local STEAM — science, technology, engineering, arts and math — programs. But he also plans for some of this learning to occur outside the classroom.

“Learning during the summer months … does not need to be limited to the school buildings,” according to the plan.

“It can be a time when teachers and students are encouraged to see the city as their laboratory, their theater, and their museum.”

While Adams will technically only manage public schools, he also has plans for private ones as well. That’s something Eytan Saenger learned firsthand when Adams paid him and some of his colleagues at SAR High School a visit last spring.

Saenger, set to become a senior this fall at SAR, first reached out to Adams for a cross-borough interfaith mayoral candidate forum hosted by SAR’s election, politics and governance club. Adams attended the forum along with Kathryn Garcia, Andrew Yang, Scott Stringer, Art Chang and Ray McGuire. And it was there Saenger learned a lot more about some of Adams’ policies.

For instance, Saenger is particularly supportive of Adams’ transition from caring about children “from cradle to career” to caring about them “from prenatal to profession.”

“Not only (are) the K through 12 years really important in a child’s youth and education, but also both the years after and the years before,” Saenger said. Adams “talks a lot about making sure that women — for childbirth and for pregnancy — that they have access to the experiences and care that they need. That policy, which I think factors into a lot of other smaller policies and his education plan, is a very important thing.”

Saenger is too young to have cast a ballot in the primary last month. However, he said while Adams may not have been his first choice for mayor, he probably would have appeared somewhere in his ranked choice.

That wasn’t the case, however, for some of the other students Saenger worked with on the interfaith forum. They weren’t as enthused about a prospective Adams administration. Nevertheless, Saenger believes young people can certainly play a large role in what’s likely the incoming administration — particularly when it comes to accountability and policies that impact young people in the city.

“He talked a little bit about … how important it is to listen to the youth and empower the youth,” Saenger said. “I’m looking forward to it because I feel like I have an aspect of knowing who the mayor is, and knowing I can trust him to an extent. But also, let’s make sure that everything he said (during the campaign) happens.”