The goodness of Tim Greathouse 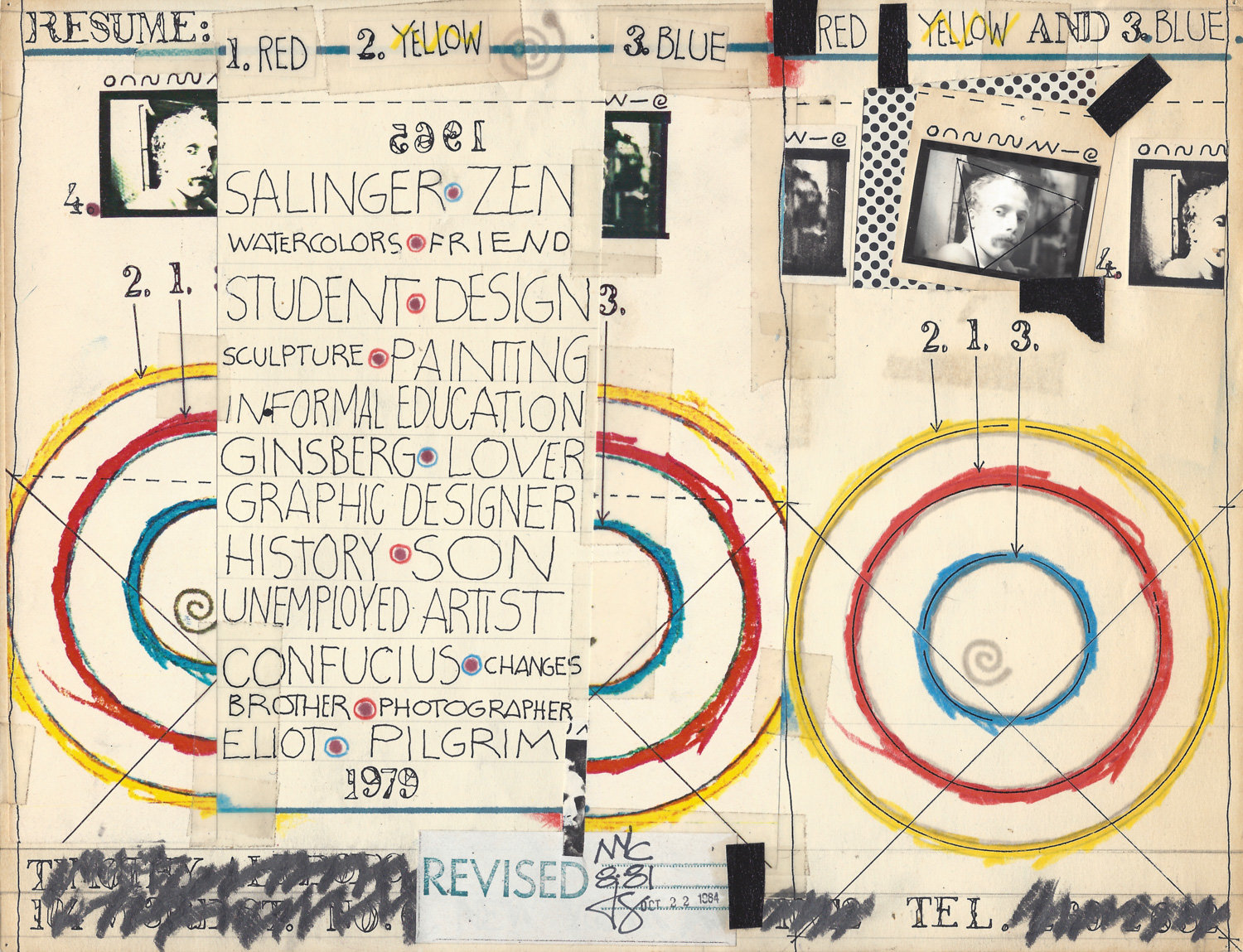 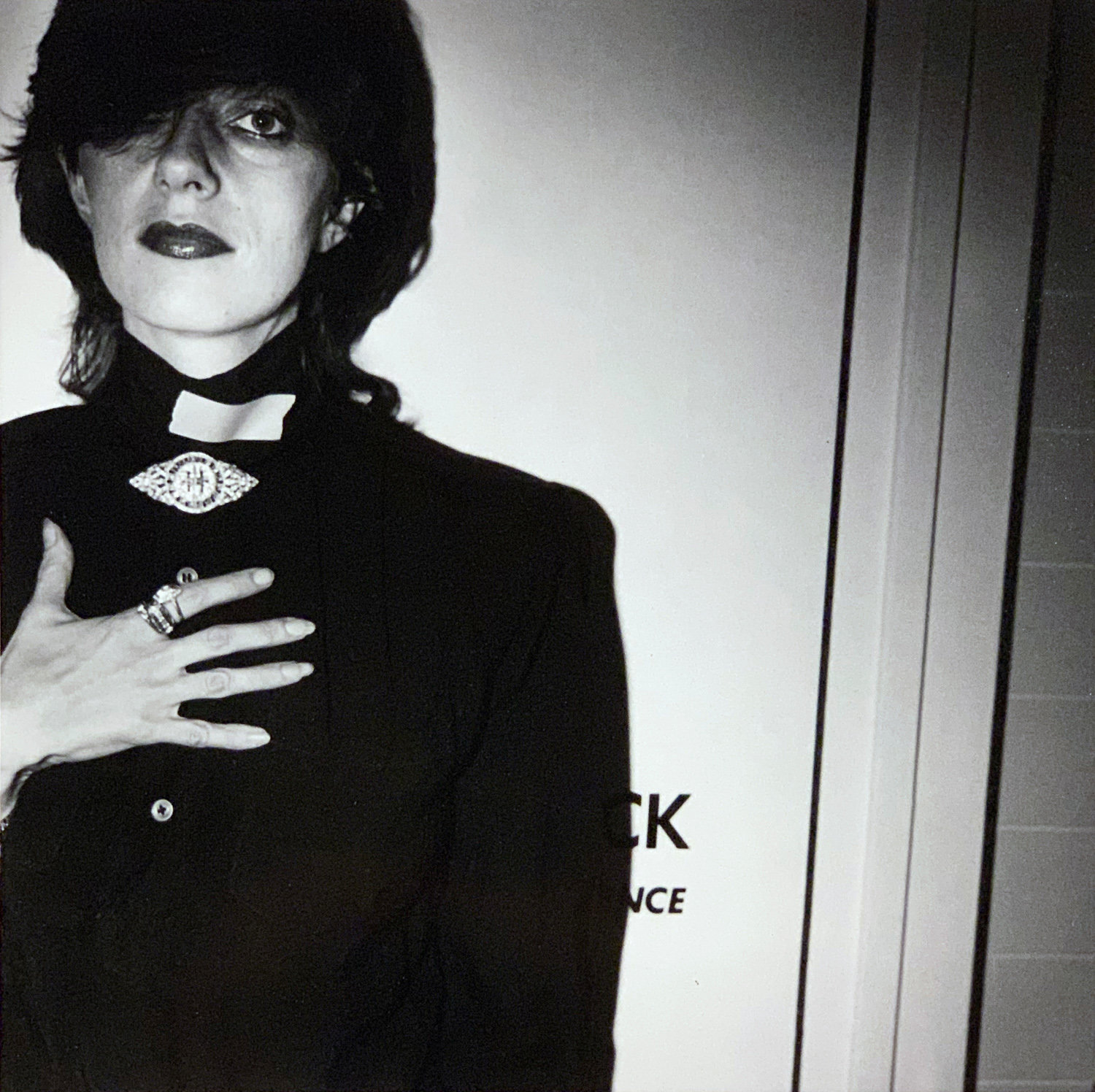 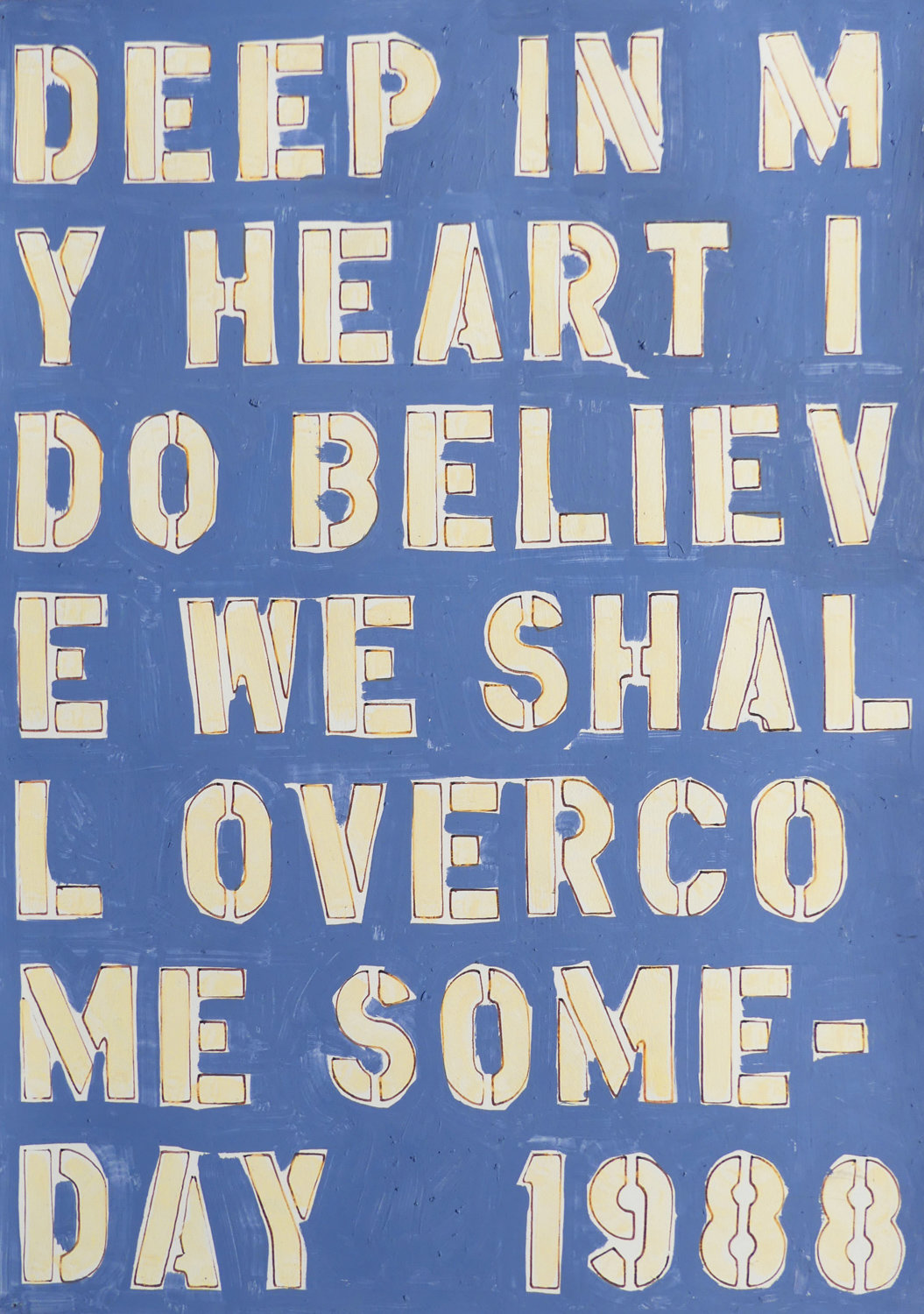 In 1988, Tim Greathouse painted a lyric from the gospel song ‘We Shall Overcome.’
Courtesy of Daniel Cooney Fine Art 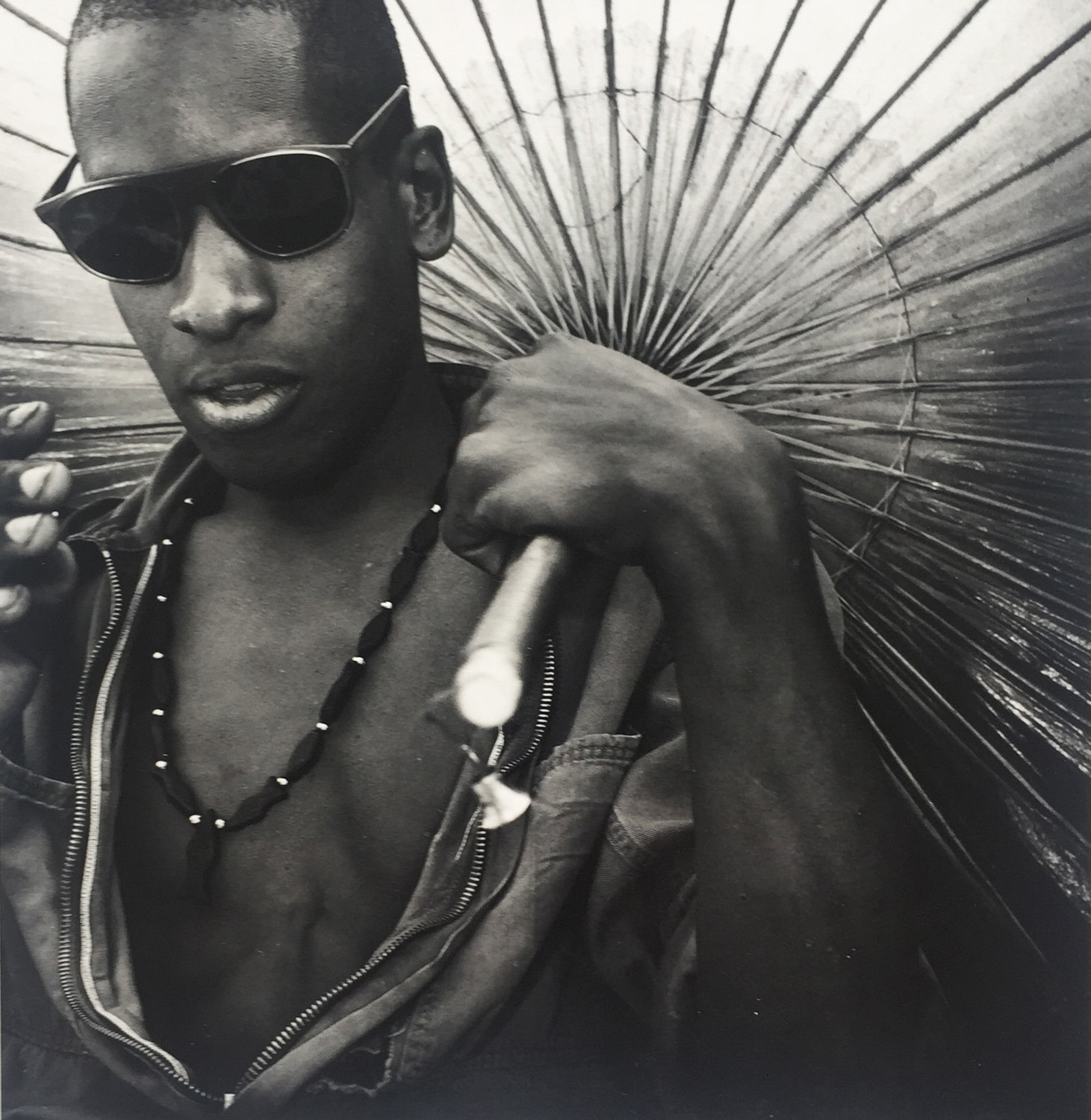 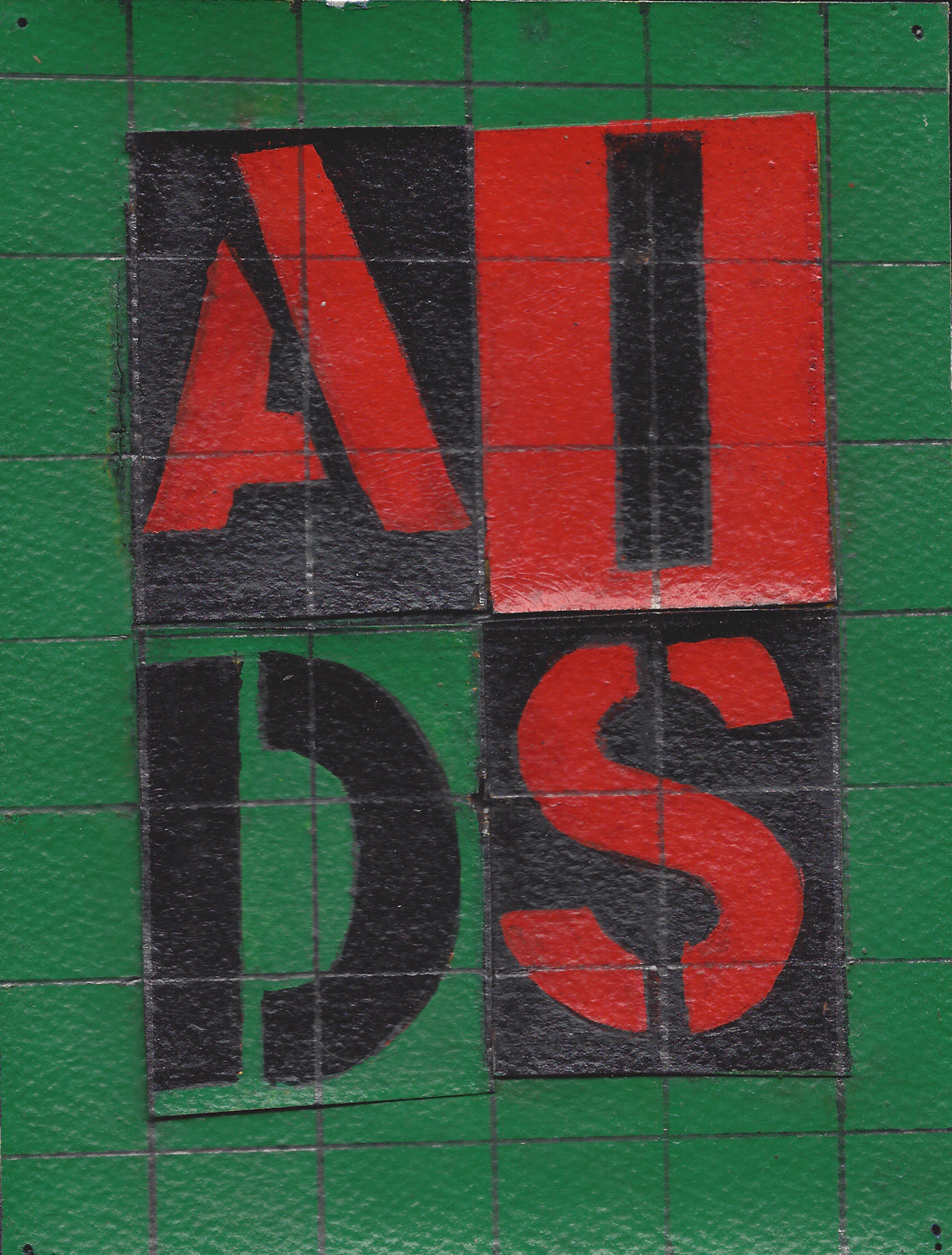 Tim Greathouse created art related to the AIDS crisis, like this 1998 piece shortly before his death that year.
Courtesy of Daniel Cooney Fine Art 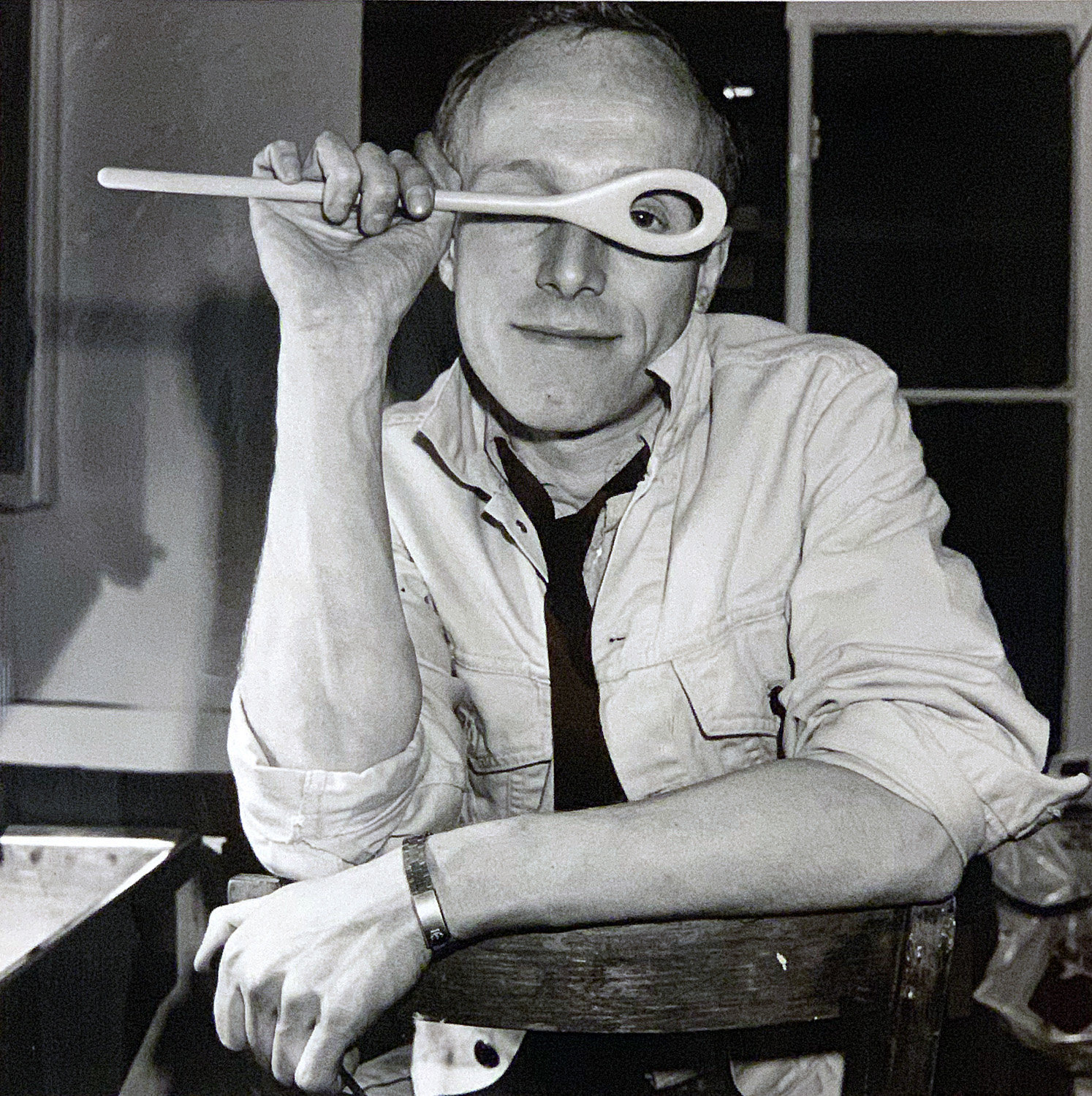 WHAT: Tim Greathouse: Albeit

The thriving East Village arts scene the 1980s would become known for was taking shape. With a tax refund in hand, gallerist Gracie Mansion set to putting a show together for Tim Greathouse, a photographer-turned-gallerist-turned-graphic designer — in her bathroom.

“I want to give you a show in my bathroom,” Mansion recalls telling Greathouse. The bathroom was in the kitchen, which provided ample space.

That show would ultimately be the only solo exhibition Greathouse would have in his lifetime. He passed away from AIDS-related complications in 1998.

Now, 38 years after that first exhibition — and 22 years after his death — Greathouse has his second solo exhibition, “Tim Greathouse: Albeit,” at the Chelsea gallery Daniel Cooney Fine Art through Feb. 29.

“He existed in a world that doesn’t exist anymore,” Daniel Cooney said.

Whereas galleries now have become outsized monoliths in some cases, the galleries in the East Village nearly 40 years ago were largely artist-run. They saw a need that they sought to fill, and Greathouse was a prominent part of that landscape.

He ran two galleries between 1984 and 1988. The first, Oggi Domani, was open until 1986, with Greathouse following. Oggi Domani was exclusively dedicated to photography, though when he moved to his second gallery, he showed sculpture as well.

“He made it possible for so many young photographers,” said Nina Velazquez, who ran New Math Gallery around that time, and now works as the parent coordinator at P.S. 81.

Velazquez decided she wanted New Math Gallery to represent Greathouse, and sought to put together an exhibition of his photographs. The idea was to show portraits of people and the objects that represented them. Yet, things did not go according to plan.

“Tim’s show did not materialize,” Velazquez said, “which is why I’m so happy this one did.”

The exhibition brings together Greathouse’s drawings, paintings and photographs, each medium representing different facets of his life and practice. The show is very much a revival and celebration of an artist who did not make it about himself.

“He was very modest about his own talents,” said Jay Katz, Greathouse’s romantic partner toward the end of his life, during a discussion at the gallery.

That modesty also was reflected in how giving he was with his own work. Those who knew him attest to the fact that he didn’t own much, and if he painted something or took a photograph, he would often give it away. That was also a function of how precarious life was at the time, in that money was often hard to come by.

“We were anti-consumers,” said Sur Rodney Sur, an artist and archivist. “He either gave everything away or recycled it. He needed what he needed to keep his life under control.”

That proclivity for giving his work away meant that his archive was decentralized. Sur had approached a number of gallerists, including Cooney, in 2012 to garner interest in a solo show for Greathouse, but those efforts were to no avail. That is until last year when plans for the current exhibition got under way. Cooney drew from a number of people, including Sur, to put the show together.

Greathouse endeavored to create a communal space for art, and his art was dispersed among his community. He was creating pieces even up until the end of his life. On their trips, Katz remembers seeing him painting postcards.

“It seemed to me almost carefree and very casual,” Katz said of Greathouse’s approach to painting.

Across his paintings, drawings and photographs, there is an immediacy and a vitality to them. The majority of the photographs in the show are monochrome portraits of his friends, artists and collaborators. There is physical and emotional proximity that communicates the connection between both people on either side of the camera.

“He really understood portraiture,” Velazquez said. “He understood getting something out of people in the most comfortable way possible. His portraits really showed who those people were.”

In looking back, more than anything, Velazquez remembers Greathouse as a fundamentally good and giving person with an enthusiasm for art and artists that was reflected in the work he created and the artists he exhibited.

“He was just such a pleasure to be around,” Velazquez said, “and so excited about everything.”