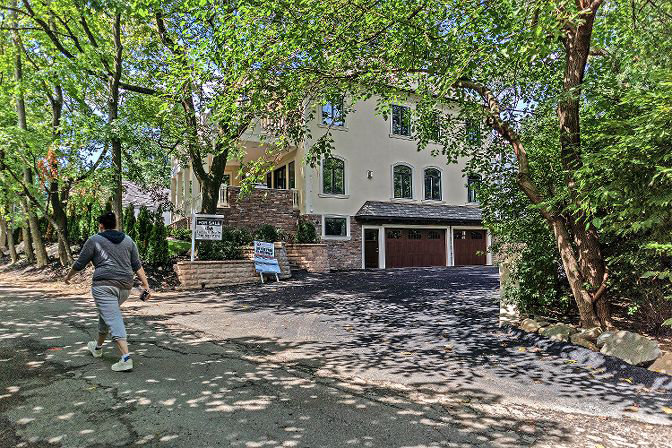 Buyers have been taking a close look at what seems to be a new home at 625 W. 246th St., in Riverdale — especially as it's the first palatial house anyone sees driving up Blackstone Place. Community Board 8 land use committee chair Charles Moerdler says it could very well be worth every penny of its $4.5 million listing price, but he warns the home still might have legal trouble ahead.
HIRAM ALEJANDRO DURÁN 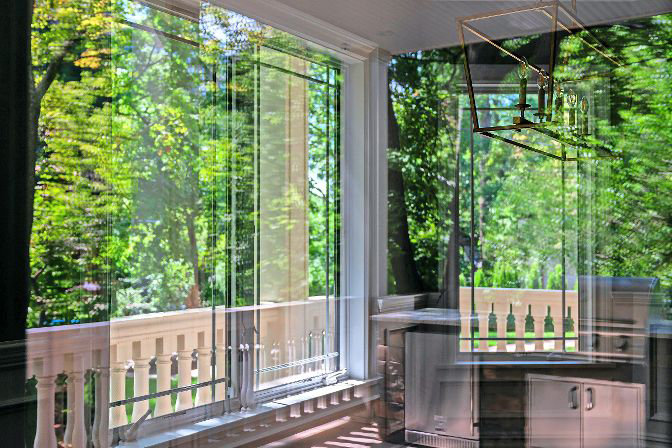 Trees reflecting through the window of the vacant house at 625 W. 246th St., which has faced controversy over its development by both the city's buildings department, and Community Board 8.
HIRAM ALEJANDRO DURÁN 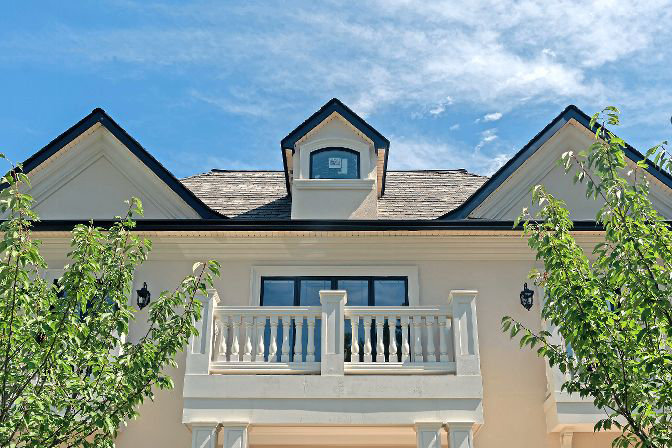 The second floor balcony of the vacant house at 625 W. 246th St. — a $4 million home that has come under some scrutiny over how it was developed by the city's buildings department and Community Board 8.
HIRAM ALEJANDRO DURÁN 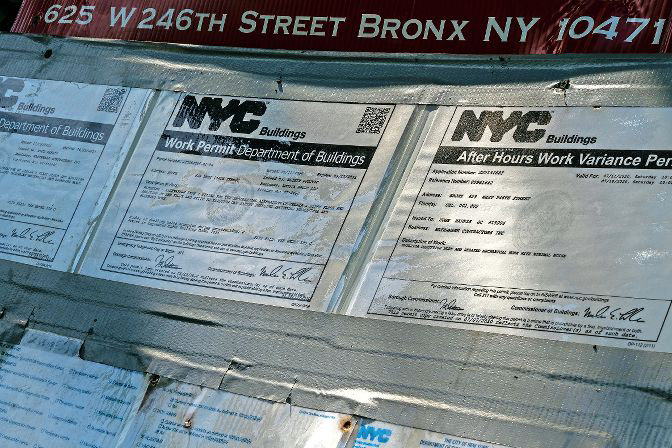 Laminated DOT work permits on display at 625 W. 246th St., show that developers were in touch with the city's buildings department, but there is still some controversy surrounding this building project.
HIRAM ALEJANDRO DURÁN 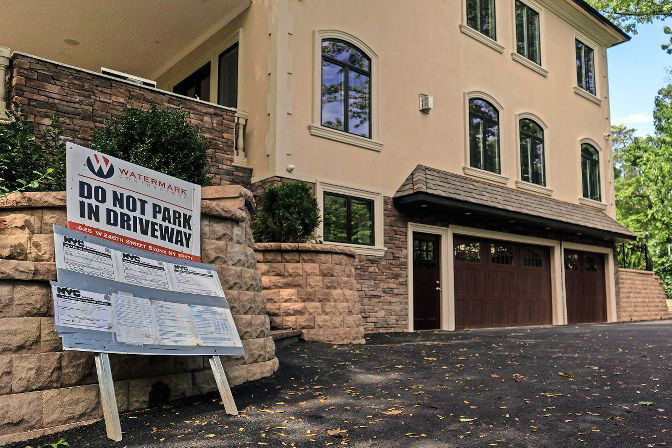 A sign reading, 'do not park in driveway' and city buildings department permits rest against the the house at 625 W. 246th St. The house has faced some controversy from city officials for alleged permit violations.
HIRAM ALEJANDRO DURÁN
Previous Next
By MICHAEL HINMAN

Halloween is that time of year when we hear stories about the scary and the unexplained.

None of those stories are real. At least we hope they’re not. But there is one very real mystery at 625 W. 246th St., and neighbors — as well as some city officials — are anxiously waiting to solve the ghost house that isn’t supposed to be there.

No, it’s not haunted or anything like that. Instead, this home — currently on the market with a listing price well over $4 million — is nothing what the developer originally permitted. In fact, Community Board 8 land use committee chair Charles Moerdler believes the house may actually violate Special Natural Area District rules designed to protect the greenway through that part of Riverdale.

But there might not be much the city can do about it.

“That building needs to be demolished,” Moerdler said. “Yes, I said demolished. This was supposed to be a remodel of a smaller house, but this is, for all intents and purposes, a brand new building. And they didn’t talk to a single person of authority to make that building happen.”

The city’s buildings department agrees. A spokesman for the city agency didn’t specifically comment on what’s been happening at 625 W. 246th, but did say the property’s owners obtained permits in November 2018 to convert an existing single-story house into a two-story home with cellar and attic.

Then last August, DOB inspectors headed out to the property after receiving complaints from CB8, finding “multiple instances where the contractors had significantly deviated from the” plans previously approved by both DOB and the City Planning Commission. That included enlarging the driveway and walkway, building additional steps up to the property, removing a retaining wall, relocating two other retaining walls, replacing a rock outcropping with new paving and grass, and other landscaping work.

Retaining walls and rock outcroppings are important, since both are specifically protected under SNAD guidelines.

The owners of 625 W. 246th did not respond to multiple requests for comment.

DOB also found that the roof did not comply with construction documents. That was enough to issue a stop work order — an order that can’t be lifted until the contractors either amend their current plans and receive approval for these new amendments, or provide DOB with a detailed plan on how they will bring the property into compliance.

Many times that means nothing more than adding trees or doing some other environmentally friendly addition to the property. And for Sherida Paulsen, a local architect and civic advocate, that just opens the door for developers to walk all over SNAD rules in the future.

“During those long discussions (last year) about changing the SNAD regulations, there was never a satisfactory response to people who violate SNAD rules,” Paulsen said. “They generally get to keep what they built, and there’s very little the community or the city seems to be able to do right now.”

While penalties may not necessarily mean tearing down brand-new multi-million-dollar houses, Paulsen wants the city to have more respect for the greenway many in the community fought hard for just a few decades ago. In her view, every time a developer finds a new way to bypass a SNAD regulation, it becomes a massive blackhole that could threaten the entire Special Natural Area District.

“Given the sensitivity of the environment and the need to protect our water resources, land and everything else, finding a better way to enforce the zoning would be very much appreciated.”

Right now, enforcement of such codes falls on the city’s buildings department. While they might be quite knowledgeable on many of the laws governing construction in New York City, SNAD is quite unique — and covers just a small portion of DOB’s overall enforcement area. Because of that, DOB officials out enforcing building rules may not necessarily be aware of different environmental regulations that are specific to Riverdale’s SNAD.

There had been a push to upgrade DOB’s enforcement ability when the city was pushing to overhaul the Special Natural Area District last year, but when those plans were abandoned, so too seemed to be any discussion about better training zoning enforcement officials.

Moerdler, who has spent nearly his entire career dealing with city construction as both a lawyer and a public servant on the community board, isn’t ready to give up. At least not yet.

“This all demonstrates that developers will take advantages that other developers have found,” Moerdler said. “That’s including this one that takes advantage of the fact that (lack of enforcement) has been the attitude of the CPC.

“It also demonstrates to me that whoever the next mayor is, they are going to have to do a major overhaul of the philosophy behind the Department of City Planning. From top to bottom.

“And if you enforce it, then developers will stop, turn their head, and pay attention.”