They’re too young to vote, but they’re old enough to care

Education, economy and life after COVID-19 among key forum topics 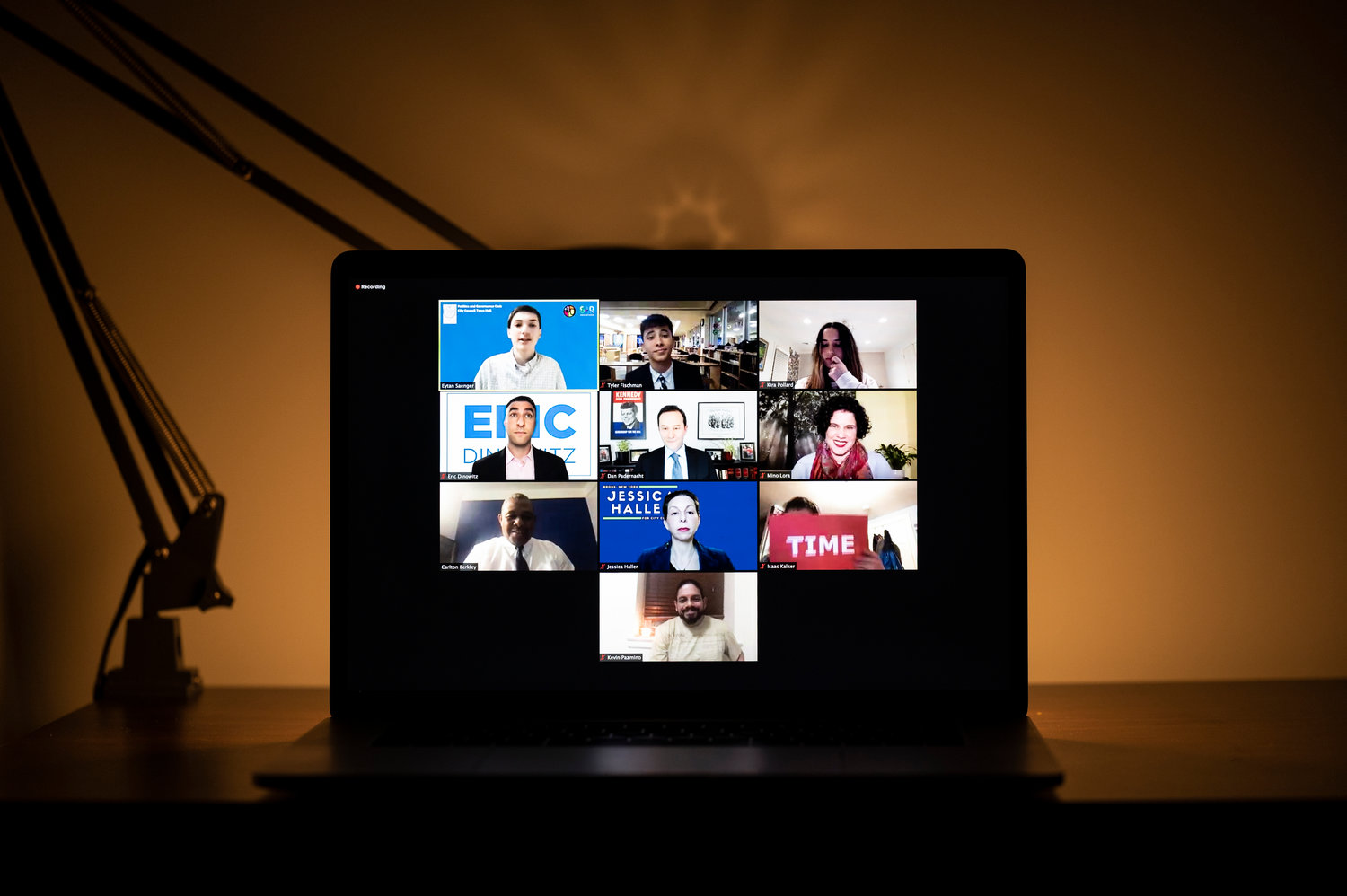 The six candidates for the March 23 city council special election appeared at SAR High School’s town hall last week. Hosted by the school’s new elections, politics and governance club, the town hall gave some insight into the candidates’ positions on education, the economy and ranked-choice voting, among other subjects.
HIRAM ALEJANDRO DURÁN 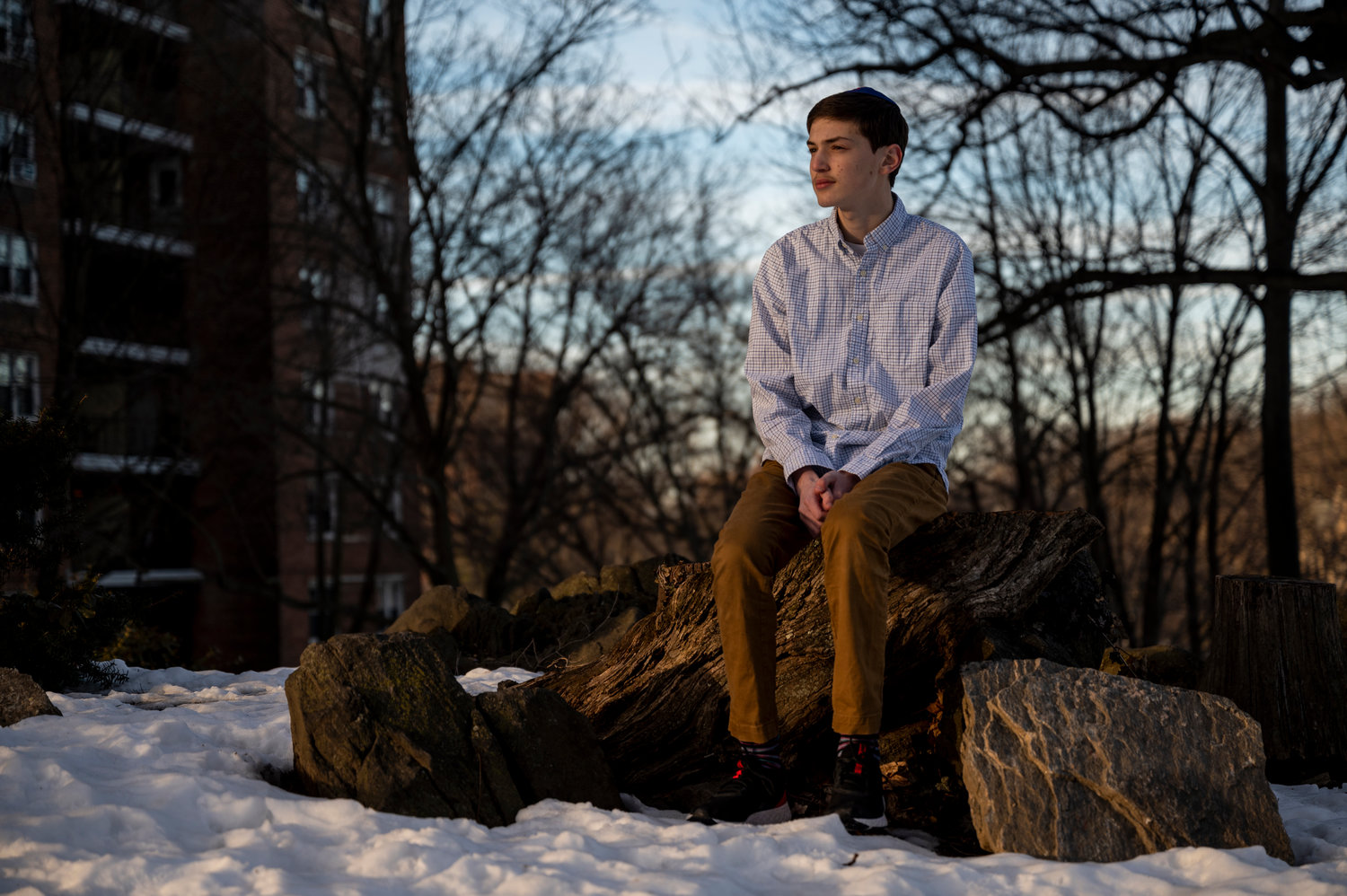 Eytan Saenger, one of the founders of SAR High School’s elections, politics and governance club’s founders, is only a junior who won’t be able to vote in the city council special election next month. Still he thinks it’s important people his age know about important political issues — which led his club to host an online town hall for the council candidates last week.
HIRAM ALEJANDRO DURÁN 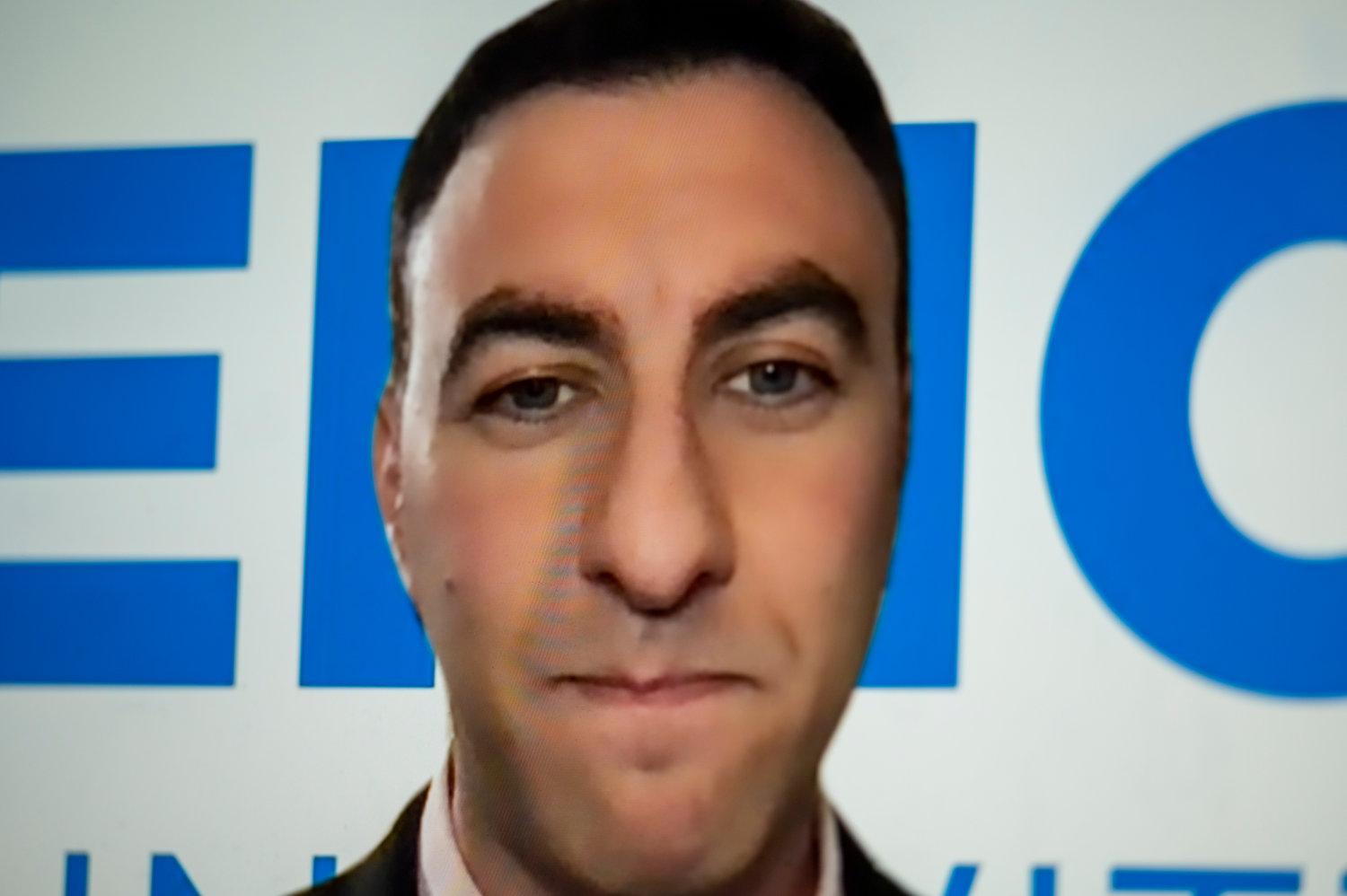 Eric Dinowitz, a former public school teacher, relied on his past experience with students during the coronavirus pandemic to flesh out his position on the challenges facing schools when questioned on them during a town hall last week. The forum was hosted by SAR High School’s elections, politics and governance club.
HIRAM ALEJANDRO DURÁN 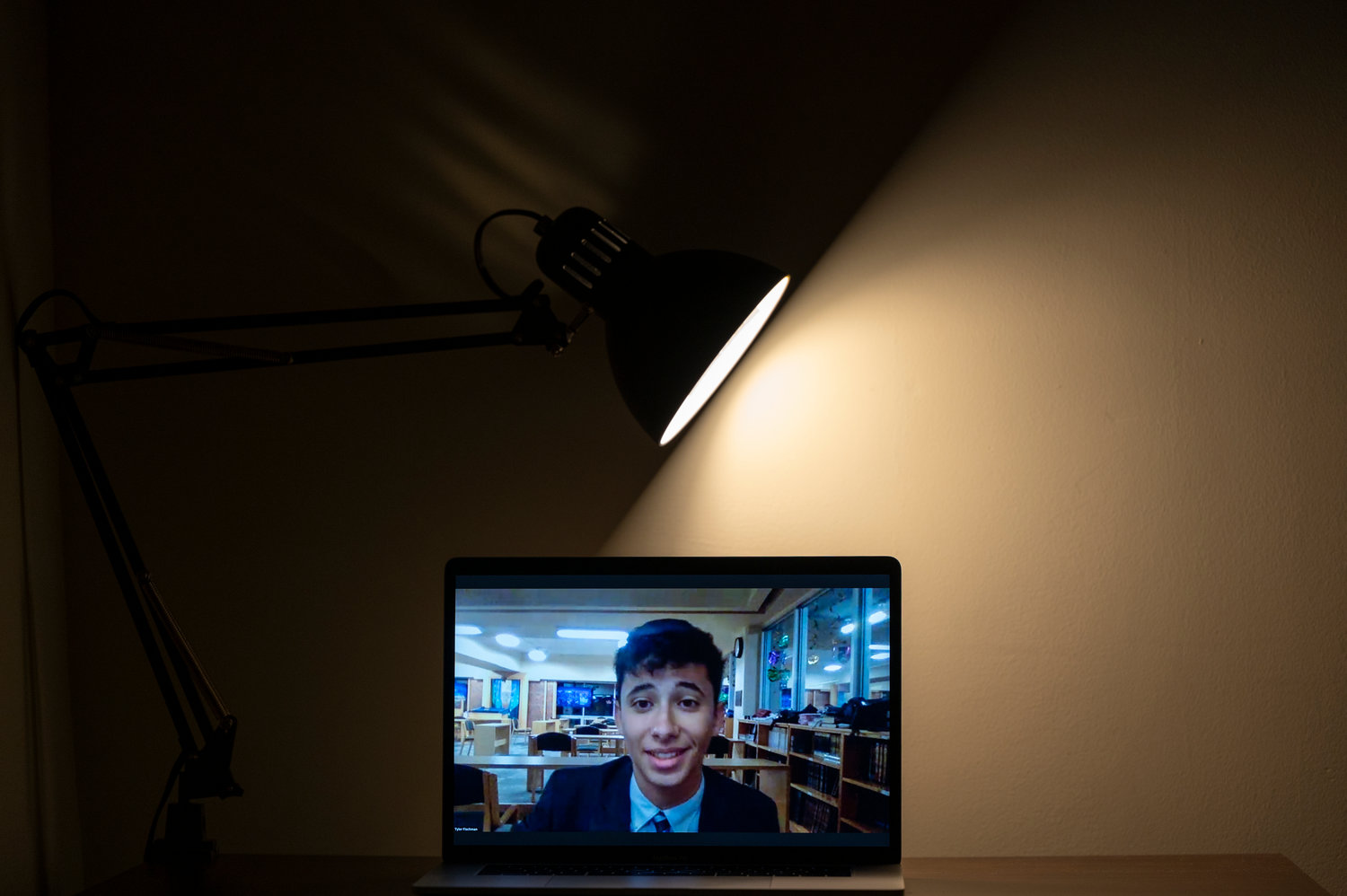 SAR High School junior Tyler Fischman — a founder of his school’s elections, politics and governance club’s founders — was front and center at a town hall last week featuring candidates in the March 23 city council special election. It was a forum where questions from younger constituents — many not even old enough to vote — took center stage.
HIRAM ALEJANDRO DURÁN 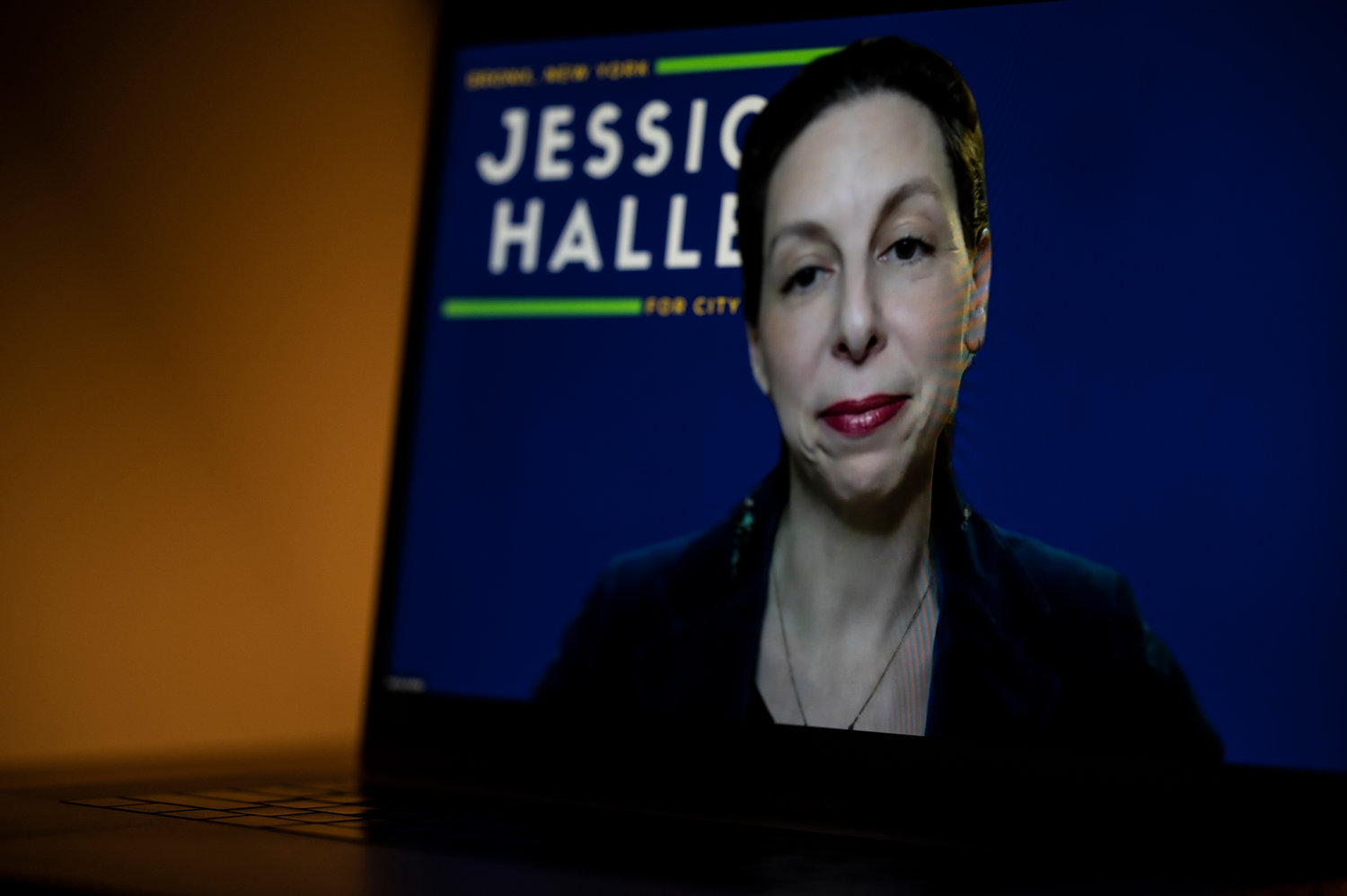 Jessica Haller’s children attend SAR, and the Fieldston environmental activist called upon their experiences during a town hall hosted by SAR High School last week. The city council candidate noted the ‘digital divide’ by public schools and private schools like SAR during the coronavirus pandemic, promising to address it if elected next month.
HIRAM ALEJANDRO DURÁN
Previous Next
By ROSE BRENNAN

Too young to vote, but certainly ready to ask the tough questions among a group of people looking to become the area’s next member of the city council.

That’s exactly what happened during a virtual town hall last week hosted by SAR High School’s elections, politics and governance club. Not only did it provide yet another forum to see exactly where the candidates for a March 23 special election stood, but it also previewed what our future leaders are going to look like.

Eytan Saenger and Tyler Fischman founded the EPG Club as a place for fellow students to discuss politics and policy with a non-partisan focus.

“When our friends talk about politics, it usually very quickly devolves into a screaming match,” Fischman, an SAR junior, said. “People are obviously very impassioned, but I think both of us saw that in the offices of government. Everyone there just kind of wants to do the best for their constituency. And there’s so much that government does that aren’t the several hot button issues of the day.”

While young people might have a more future-oriented outlook on important issues like health care and climate change, many of the questions raised at last week’s town hall were more about the present — one where living in the midst of the coronavirus pandemic remains a reality.

Aptly, the town hall began with a few questions about education. Jessica Haller, an SAR mom herself, used the school to illustrate the deep divide between the pandemic’s impact on public versus private education. She recalled the day last year when the pandemic closed SAR.

“We all got a text that SAR was closed, and the next day, Avi Bloom made it so that you were all up and learning on Zoom,” Haller said. “Schools like SAR have the ability to show us the art of what’s possible. We now need to take the responsibility of making sure every kid across the city has access to technology and broadband … so that they don’t fall further behind.”

But that’s easier said than done for public schools, many of which don’t have the same kind of resources that institutions like SAR have. That was something pointed out by one of Haller’s opponents in the special election, Dan Padernacht.

“We need to essentially start speaking to the school administrators and the teachers within the schools in our district to figure out what exactly our local schools need,” the Kingsbridge Heights real estate attorney said. “We need to make sure that (students) are getting Wi-Fi to be learning at home immediately. And that’s an essential service that we need.”

Eric Dinowitz had a front-row seat to the detrimental effects the pandemic had on his students.

Much of the former public school teacher’s ire was directed toward Mayor Bill de Blasio, who Dinowitz believes must be held accountable for a lack of planning and communication with school communities.

But education wasn’t the only topic SAR’s students were interested in. Many had questions about the economic impact of the pandemic, wondering how the city will bounce back, and if and when it would do that.

Mino Lora believes building up the artistic community is a way to bring the city’s economy back, along with continued protections for essential workers.

“Billions of dollars are generated through our arts and culture sector, and also the vibrancy of the trauma that all of us as New Yorkers have experienced,” the non-profit executive director said. “I think really putting our artists back to work — our gig workers and nighttime (workers) back to work once it’s safe — is going to be a very important part of building up the economy.”

Haller offered an optimistic promise to SAR’s students: While it might take a while for the economy to come back in full swing, she believed it would happen. After all, it was déjà vu from another city crisis.

“We are going to come back,” Haller said. “Those of us who were here during 9/11 and felt the same way: New York City bounced back.”

While the March 23 electoral landscape might be unique in and of itself, it also will be one of the first city elections to utilize ranked-choice voting. Most of the candidates stated their support for the new process, saying it leveled the playing field and served as a check against incumbency and name recognition — sentiments seemingly directed against one candidate in particular, Eric Dinowitz, who is the son of Assemblyman Jeffrey Dinowitz.

And since the voting process was a bit different this time around, the EPG Club asked each of the candidates who they’d select as their second-choice candidate. Lora and Haller once again named each other, while retired police detective Carlton Berkley chose Padernacht. Kevin Pazmino — the lone conservative in the race — said he was undecided, but was leaning toward either Padernacht or Berkley.

Padernacht also was undecided, while Dinowitz sidestepped the question.

Saenger believes getting involved in politics — or at least learning about it — is very important for young people. While teens like him might not be able to vote, they don’t live in a vacuum either. It’s important to know what policies are out there, and how those policies might affect them.

“A good percentage of the population is under 18, and the decisions made in government affect them,” Saenger said ahead of the forum. “Decisions about education can’t just be impacted by 40-year-olds, 50-year-olds and older people. They have to be impacted by the students who want to see different changes.”