Thieves working overtime in the 50th 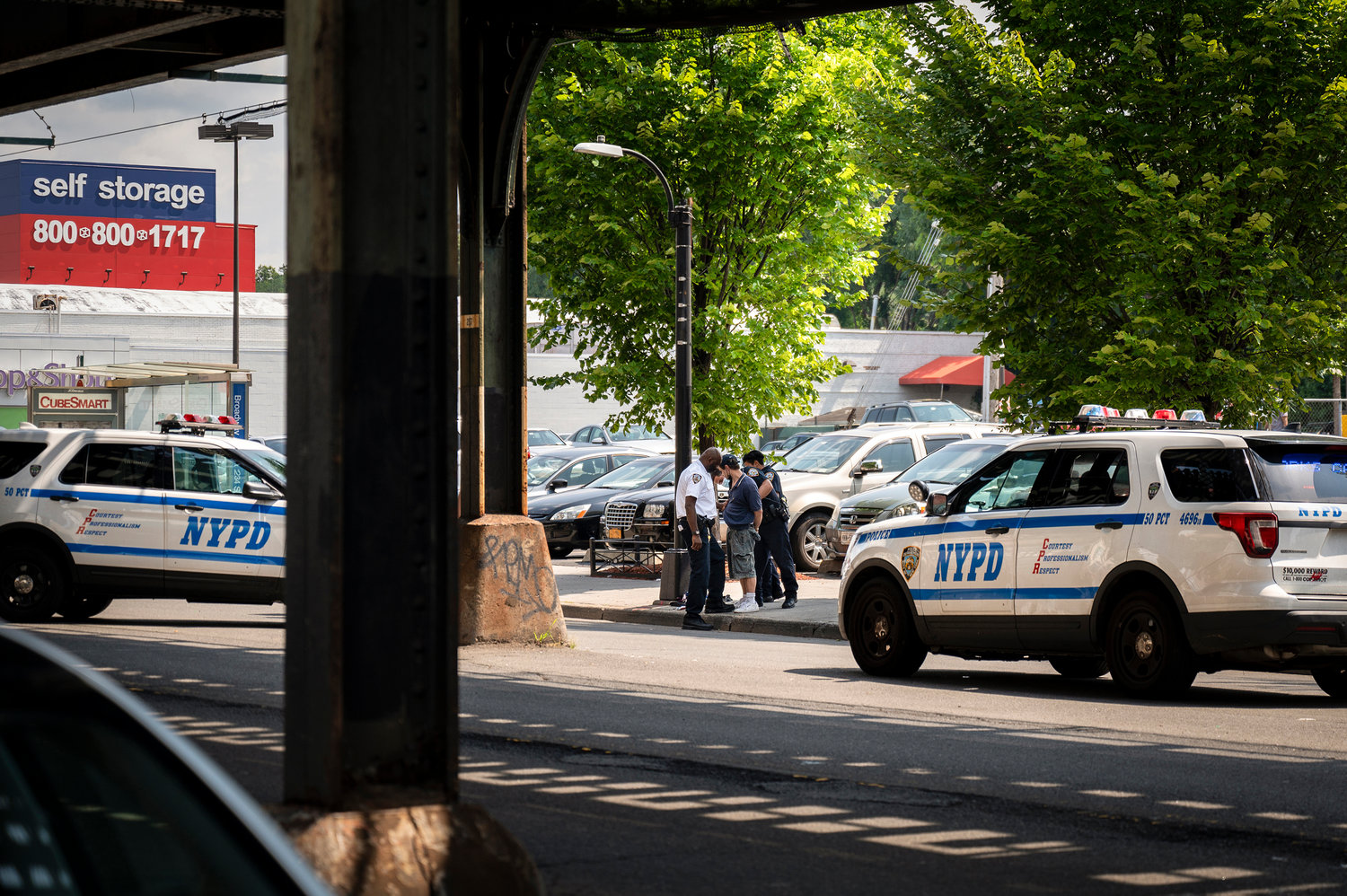 Two 50th Precinct squad cars partially block traffic while officers arrest a man near West 233rd Street and Broadway. Over the past two years, the precinct has seen a significant spike in theft of all stripes — including burglary, grand larceny and robbery.
HIRAM ALEJANDRO DURÁN

Theft has been skyrocketing in the 50th precinct. Jewelry. Checks. Cell phones. Wallets. Tools. Car parts. Even pet food. You name it, and thieves are not only stealing it, but stealing it more often.

In fact, robberies are at a 20-year high. The last time there were this many in a year was back in 2002. For grand larcenies, this is the highest number ever seen since the NYPD began publishing its crime statistics back in 1993.

Some in the area have taken note and are getting worried.

“I never used to, but now I think about where I’m going,” long-time resident Susan Jacobs said after a recent violent robbery close to her home. “I think about whether or not it’s going to be light out. I think about getting home. It’s a terrible feeling. It seems like everybody today has a gun.”

“Vehicular accessories,” or stolen car parts, have been the most common items snatched this year. Of the 454 grand larcenies within the precinct, 124 of them came from that category alone. Those who read The Riverdale Press Police Beat column know that every month, without fail, catalytic converters are stolen from cars in the area.

The car part, which helps reduce a vehicle’s harmful emissions, is a hot commodity as thieves, who are able to remove the car part in less than five minutes, can make a pretty penny selling the metal on the second-hand market.

Yet at least one person in the city council is trying to bring that practice to a swift end. Just this month, Councilman Justin Brannan introduced a bill that would prohibit scrap metal shops from buying and selling used catalytic converters.

“Cops can’t be everywhere at all times. The only way to put an end to this is by prohibiting the scrap metal dealers from purchasing catalytic converters in the first place. You don’t have to be Sherlock Holmes to know if a guy comes in looking to sell 10 catalytic converters that they’re all stolen.”

While theft-related crimes have been on the rise throughout the city, neighboring precincts have not seen an attendant spike.

“We know that any crime increase in our city is wholly unacceptable,” said Police Commissioner Keechant Sewell in a statement. “Everyone who lives, works, and visits here deserves to be safe, and the members of the NYPD will tolerate nothing less.”

Still, there is some good news. The murder rate throughout the city dropped 54 percent in August 2022 compared to August 2021. In fact, that marks the fourth-lowest number of shootings for any August since the NYPD began utilizing CompStat.

The department has been quick to praise itself for these numbers, saying the drop is due in part to its anti-gun initiatives.

“The NYPD’s array of strategies to remove illegal firearms from the streets is gaining traction as reflected in the department’s seizing more than 4,880 guns year-to-date in 2022,” read a recent press release.

“Our gun seizures and gun arrests in August  — and the corresponding downturn in shooting incidents — indicate a positive corner turn in our fight to stop criminals willing to carry illegal guns and brazenly use them,” the commissioner said in a statement.

Neither the communications department at the NYPD nor the 50th Precinct would grant an interview with The Press to discuss what accounts for the spike in theft or what its officers are doing to try and combat this trend.

Yet in that same press release, the commissioner did imply what the department believes may be to blame.:

“We know there is much more work to be done to address crime in our city. We must push forward as we continue to advocate for further refinements to the state’s well-meaning criminal justice reforms that too many recidivists and violent criminals exploit.”