An advantage? Or is it a curse? It’s always been this way in Marble Hill 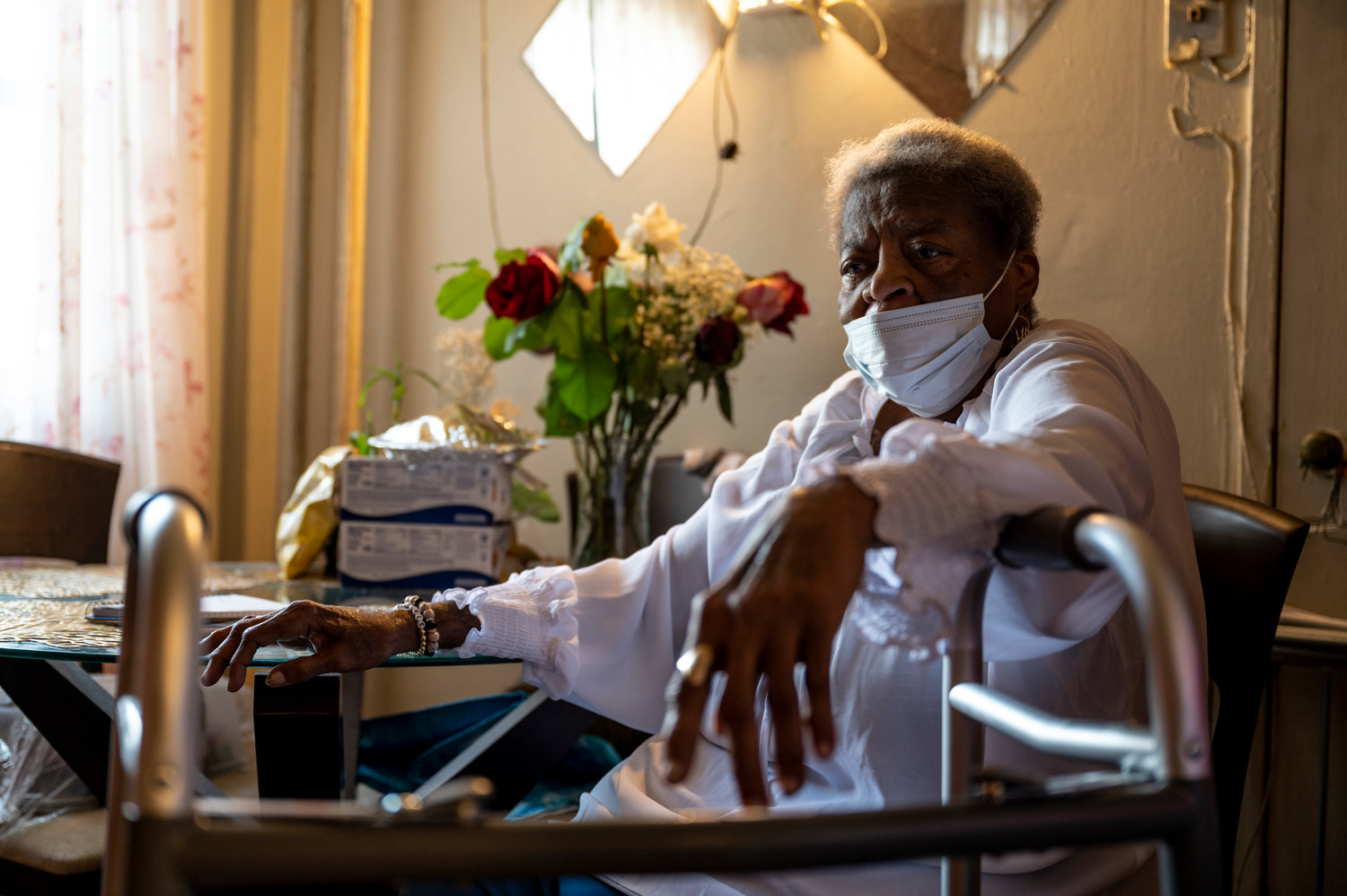 Paulette Shomo is still active in her Marble Hill Houses community after living there for more than a half-century. For her, it’s seems there was always a struggle in managing three different council members for a single community, but admits having that much representation can be advantageous as well.
HIRAM ALEJANDRO DURÁN 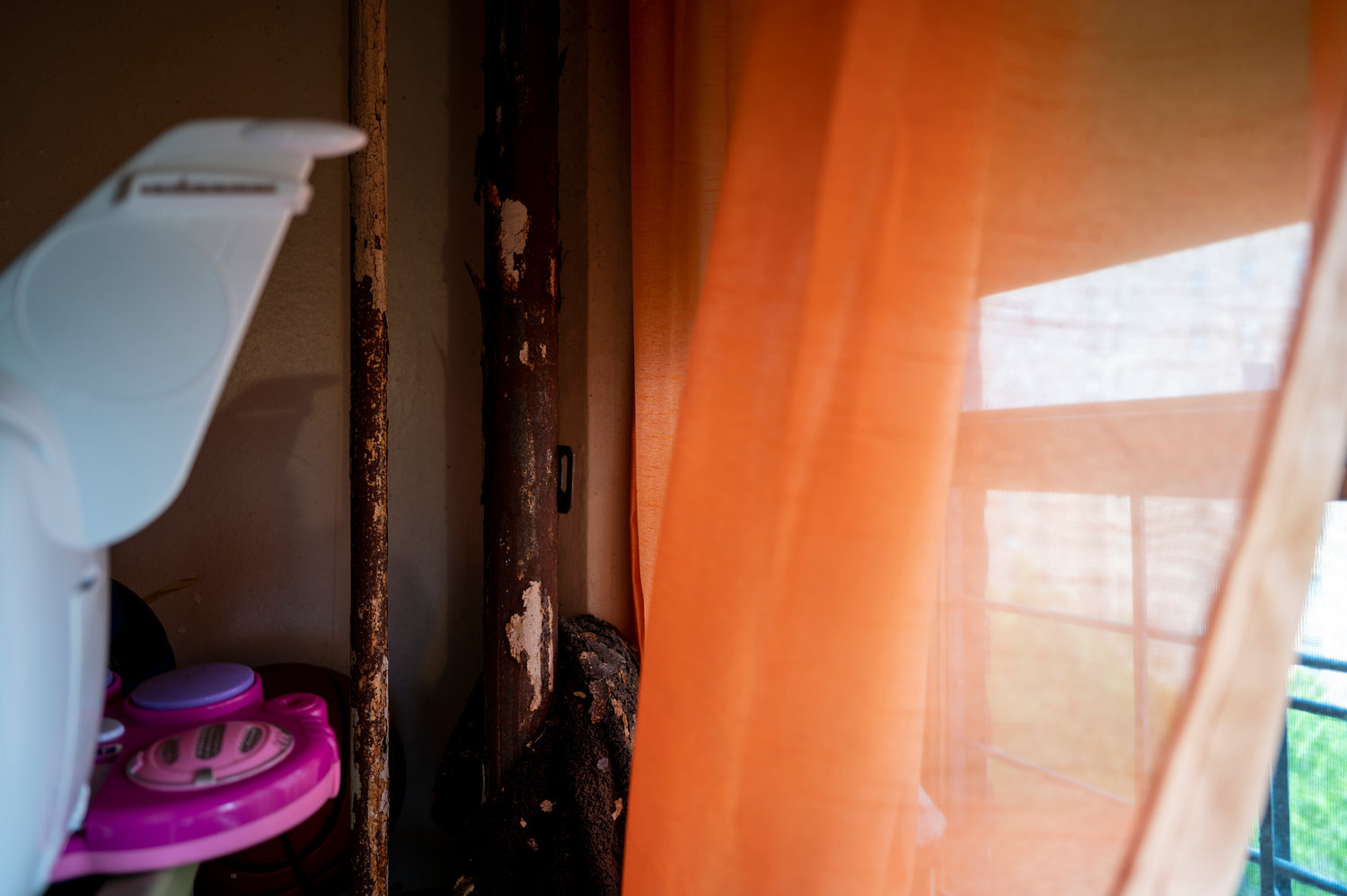 Addressing many long-term issues like water damage from constant leaks and poor sealing in Paulette Shomo’s apartment at Marble Hill Houses is something that might not be necessarily hurt by the fact three different councilman represent a single community — but it probably doesn’t help much either.
HIRAM ALEJANDRO DURÁN 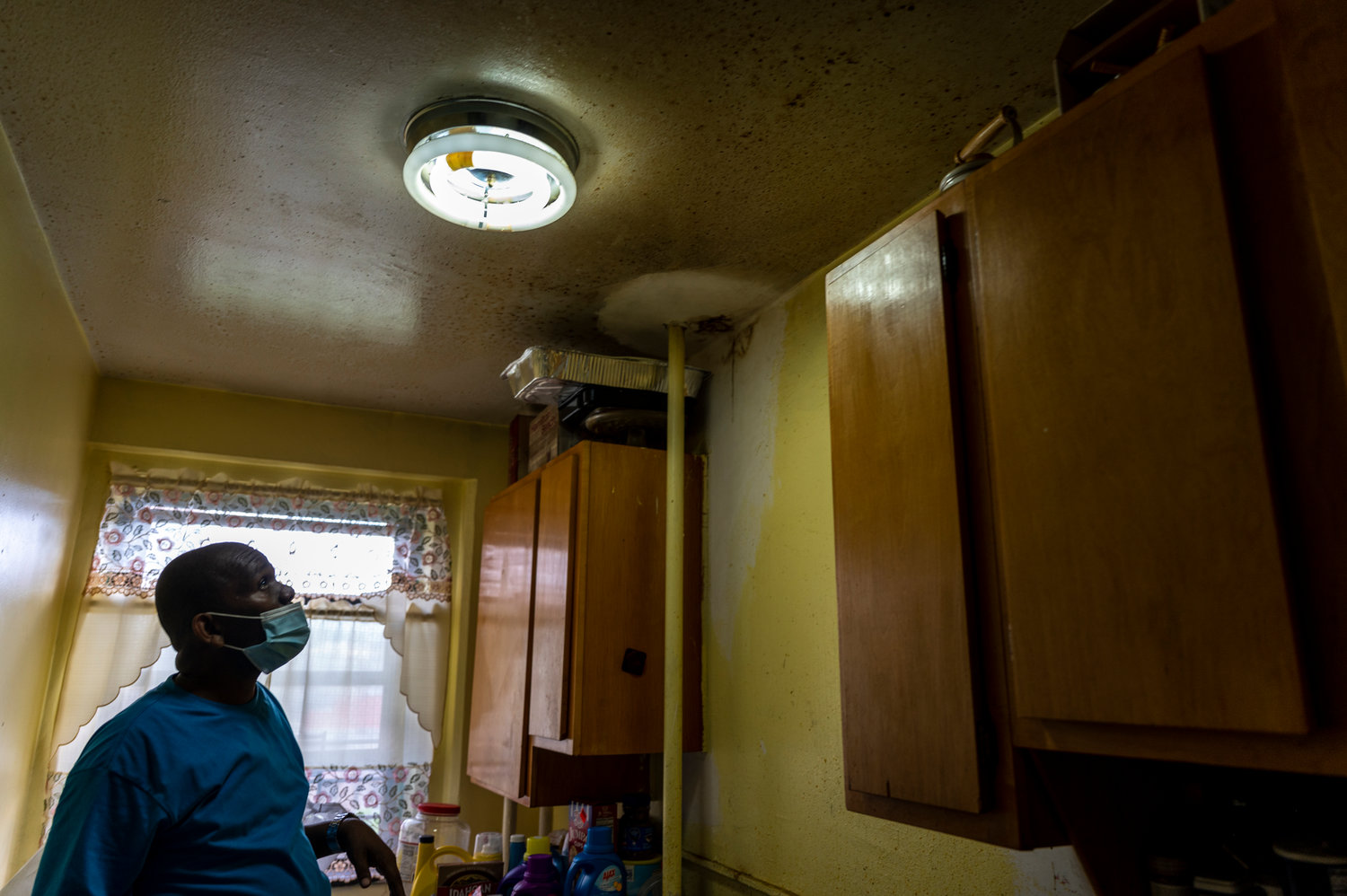 Addressing many long-term issues like water damage from constant leaks and poor sealing in Paulette Shomo’s apartment at Marble Hill Houses is something that might not be necessarily hurt by the fact three different councilman represent a single community — but it probably doesn’t help much either.
HIRAM ALEJANDRO DURÃN 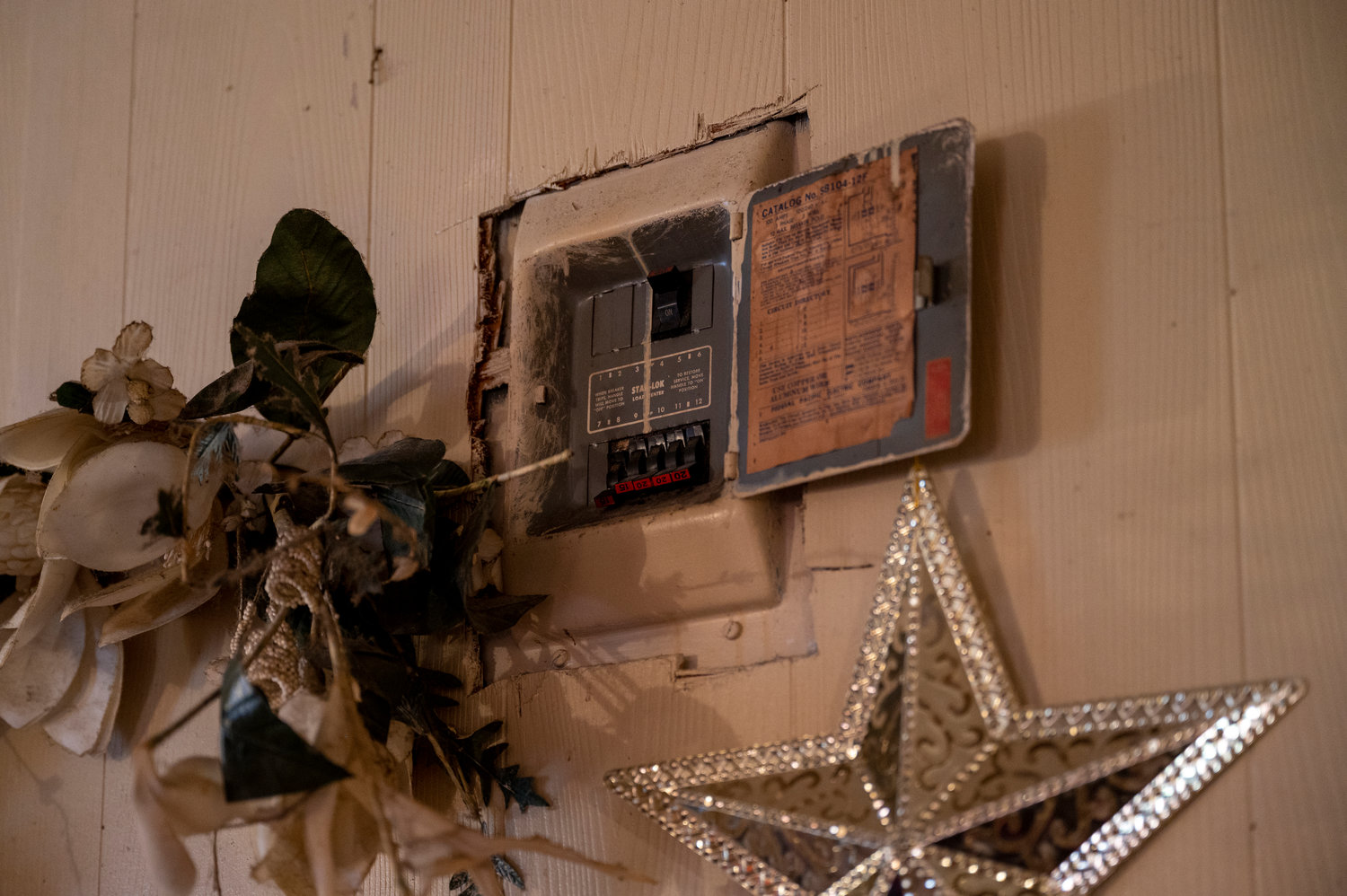 The circuit breaker in Paulette Shomo’s apartment needs constant finagling when fuses blow every time she has more than a handful of electrical appliances running at the same time. It’s art of many issues not addressed at Marble Hill Houses, but Shomo doesn’t necessarily believe the failure to fix it lies on the fact her community had three different city council members representing it..
HIRAM ALEJANDRO DURÁN 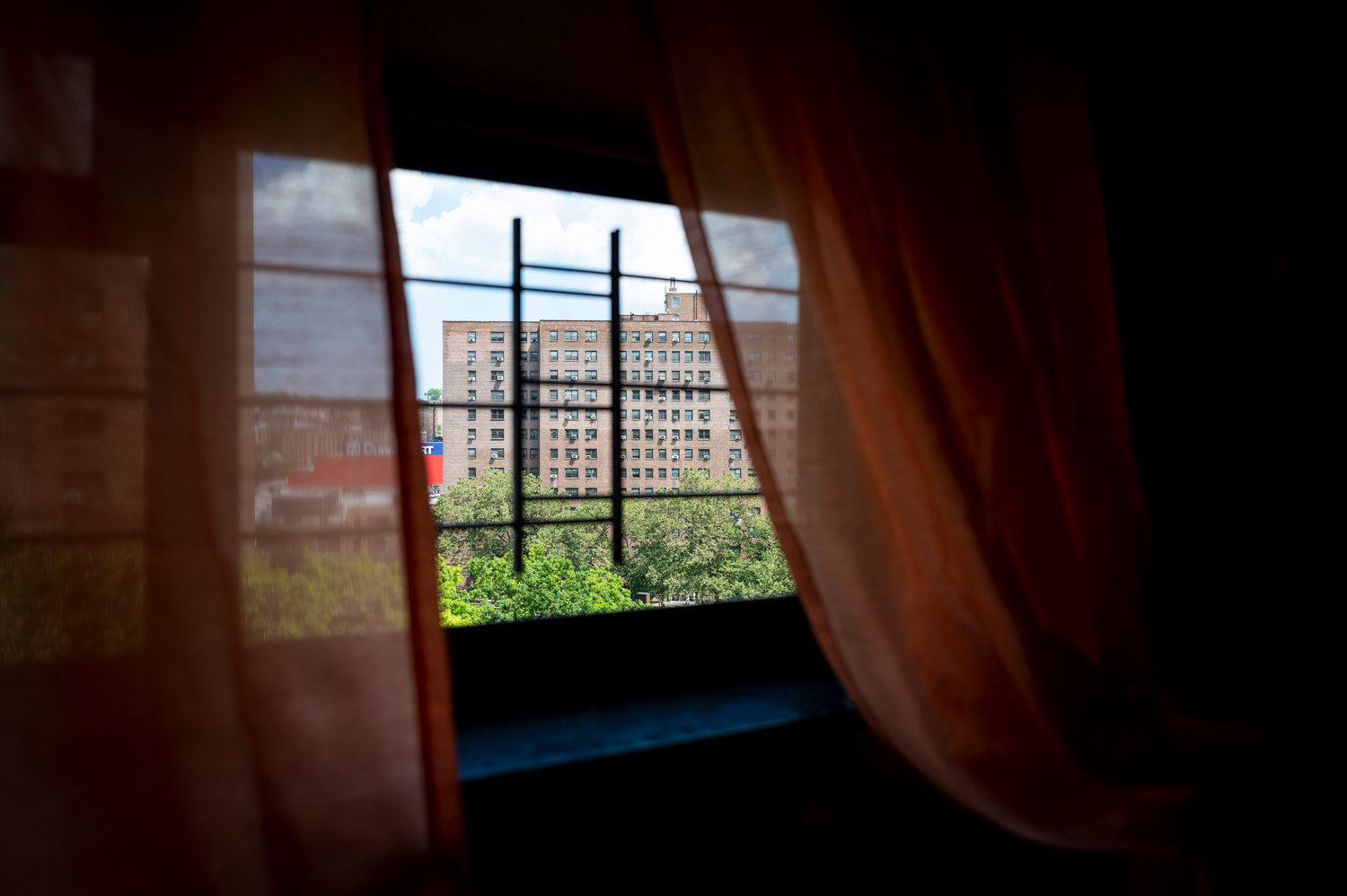 Paulette Shomo has a clear view of neighboring buildings in her Marble Hill Houses NYCHA community. But which council member represents what really depends on exactly where each building is. That means any neighbor could be represented by Ydanis Rodriguez, Fernando Cabrera or Eric Dinowitz.
HIRAM ALEJANDRO DURÃN 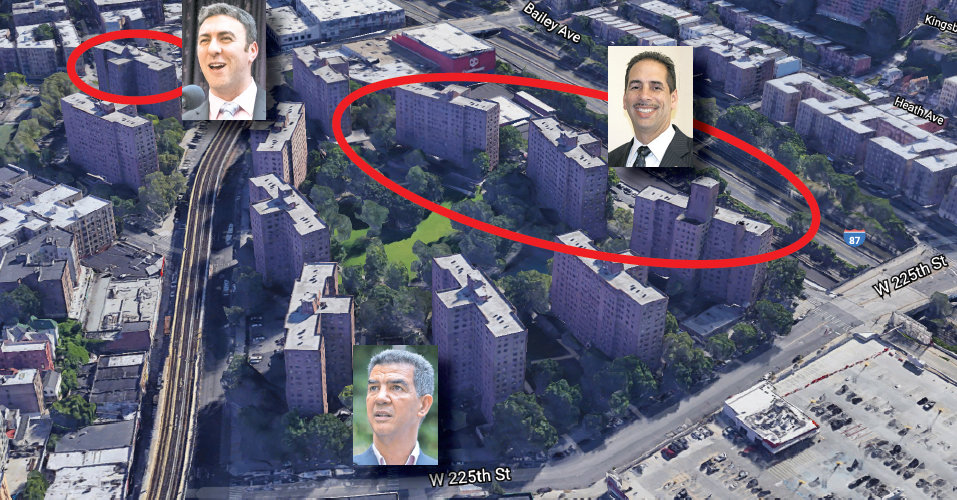 Finding exactly who represents you in the city council is not an easy task for NYCHA’s Marble Hill Houses, spread out on 16 acres inside both Manhattan and the Bronx. All seven buildings on the Manhattan side are represented by Ydanis Rodriguez. But after that, it gets tricky. Fernando Cabrera serves three buildings along Exterior Street, while Eric Dinowitz is the councilman for just one of the buildings, located across Broadway at West 230th Street. Representation in Albany is a bit less confusing with Assemblywoman Carmen De La Rosa and state Sen. Robert Jackson representing all seven Manhattan buildings, while Assemblyman Jeffrey Dinowitz and state Sen. Gustavo Rivera include all four Bronx buildings in their districts.
Courtesy of Google / Illustration by Michael Hinman
Previous Next
Support journalism

If you want to see more stories from Joseph, please donate today at tinyurl.com/ReportForRiverdale.

Paulette Shomo has seen many elected officials come and go over her 50 years living in the Marble Hill Houses. With it have come many promises — few of them ever fulfilled.

Like the big open grassy area in the middle of her complex off Broadway and West 225th Street that was supposed to be home to a community center for kids that never developed. But at least those representatives even remembered the NYCHA buildings were even there, something Shomo says too many others haven’t.

While she doesn’t get around as much as she used to, Shomo’s always aware of just about everything happening around Marble Hill Houses — its needs and its improvements. Those holding office and representing her community matter, as well as the work that goes into her home.

Marble Hill Houses already gets labels Shomo says is unfair — it’s a drug den, or an environment where crime thrives.

Yet, she’s adamant that despite the reputation of public housing, Marble Hill Houses is in a class all of its own. And don’t even think about referring to it as the “projects.”

“We’re not perfect, but we’re far from the kind of place most of these other public houses are depicted to be in the media,” Shomo said.

And Marble Hill Houses is one of the more unique public housing complexes in the city. Its 16 acres are nestled on what is seemingly the Bronx side of the Broadway Bridge, but it actually straddles the border shared by both the mainland borough and Manhattan, creating a community where residents in one building could be represented by a completely different set of elected officials than those immediately next-door.

In fact, when it comes to some of those elected who matter most — like city council members — Marble Hill Houses can boast not just one, not even just two, but three people at City Hall. And while one might say that there is no such thing as too much representation, for Shomo, it’s clear more often than not there are just too many cooks in the kitchen.

“I don’t see why we need to have three different council members,” she said. “I feel like we’d get a lot more done if we had just one person making those decisions.”

Depending on which of the 11 buildings one might reside in the New York City Housing Authority complex, your councilman could be anyone from Ydanis Rodriguez, Fernando Cabrera or even one of the council’s newest members, Eric Dinowitz.

Rodriguez, whose council district is in Manhattan, represents the largest share of buildings, while Cabrera represents three buildings along Exterior Street that happen to be just across the Bronx borough line.

Dinowitz has the smallest share — one of two buildings located on the other side of Broadway, away from rest of the complex. His building borders West 230th Street, but the one immediately next to it is actually considered part of Manhattan, and is represented by Rodriguez.

It’s a complex tangle of City Hall representation that, according to Tony Edwards, can more often than not do more harm than good.

“It would be easier to have money contributed for things that we need since we’d have three elected officials distributing the money,” the Marble Hill Tenant Association president said. “It’s just a matter of getting them all to agree on paying for the same things.”

Shomo, who lives in a building represented by Rodriguez, once held Edwards’ position among the residents, and now leads a police council that liaises with the New York Police Department’s 50th Precinct. But unlike many who call Marble Hill Houses home, Shomo had a chance to see how NYCHA operates from the inside, spending nearly 40 years as a housing assistant — someone who typically lends a hand with the management and administration of a particular housing complex.

Now 79, her job these days continues to ensure her neighbors are living in the best possible environment available.

“I will say this much, even though violence has been increasing in the area, I feel like we are making strides to keep that to a minimal,” Shomo said.

In fact, that’s where having three council members have been advantageous. Rodriguez, Cabrera and Dinowitz’s predecessor — Andrew Cohen — worked together to increase police surveillance in and around Marble Hill Houses, in an effort to keep those who live there safe.

Still, as violence continues to surge across the city, some of Shomo’s neighbors aren’t feeling too confident.

Camejo has lived in Marble Hill Houses for the past 15 years, moving there from Washington Heights. While she admits there are very few problems these days, from time to time some issues have resurfaced, like neighbors fighting with each other in the same apartment building.

In one particular case, a tenant was moved from one building to another after tensions with a neighbor reached a boiling point.

There’s also the occasional robbery — an issue many in the community have tried to address with NYCHA in years past.

But then there have been other issues not related to crime — like lead paint, heating and sewage problems. Many of the city’s NYCHA buildings were constructed in a time when no one really thought twice about what materials were used in paint. In recent years, many older buildings have worked to remove the lead — known to cause developmental problems with children.

Mayor Bill de Blasio launched a campaign targeting lead paint in NYCHA complexes in 2019, although the administration is still a long way from removing lead paint from every apartment under NYCHA’s control.

And it seems there’s not a winter that goes by without some problem ensuring Marble Hill Houses stay warm. Just last December, more than 150 apartments in one of Cabrera’s buildings along Exterior Street spent weeks without hot water, according to published reports.

While his office does receive plenty of complaints from the three buildings on Exterior Street, one of the longest-standing beefs these residents bring to Cabrera is the lack of follow-up on reports made to Marble Hill Houses management addressing various issues within their units, spokesman Clark Peña said.

In response, Cabrera has sponsored a bill intended to allow the city’s 311 system to handle all NYCHA complaints. That, the councilman says, will create transparency and hold management officials accountable to the residents they represent.

Right now, filing a complaint by many living in NYCHA apartments means creating an internal trouble ticket that, more often than not, leads to nowhere.

“There are times I complain about different issues in the building or around the area, and nothing ever gets done,” Camejo said. “There’s no way of tracking what’s getting done.”

But even without Cabrera’s proposal added to the city’s law books just yet, Peña promises any residents can turn to the councilman for assistance at anytime.

“We’re always happy to help people no matter where they come from or what they’re representation is,” he said.

Dinowitz is still relatively new to his position, but believes there are many opportunities to work with his colleagues at City Hall to make a difference.

“It all boils down to collaborating with the respective council members that represent a portion of the Marble Hill Houses,” Dinowitz said. “It is important to facilitate a productive working relationship between our offices, because the work that we do centers on constituents’ needs.”

In fact, as far as Dinowitz is concerned, Marble Hill Houses have a tremendous advantage with the trio representing them.

“I am optimistic that having three council members — instead of just one — advocating on behalf of the Marble Hill residents will give them strong representation in City Hall,” Dinowitz said.

Shomo says that’s fine, as long as they keep one thing in mind: “I just want them to remember they are working for the good and the betterment of the development.”