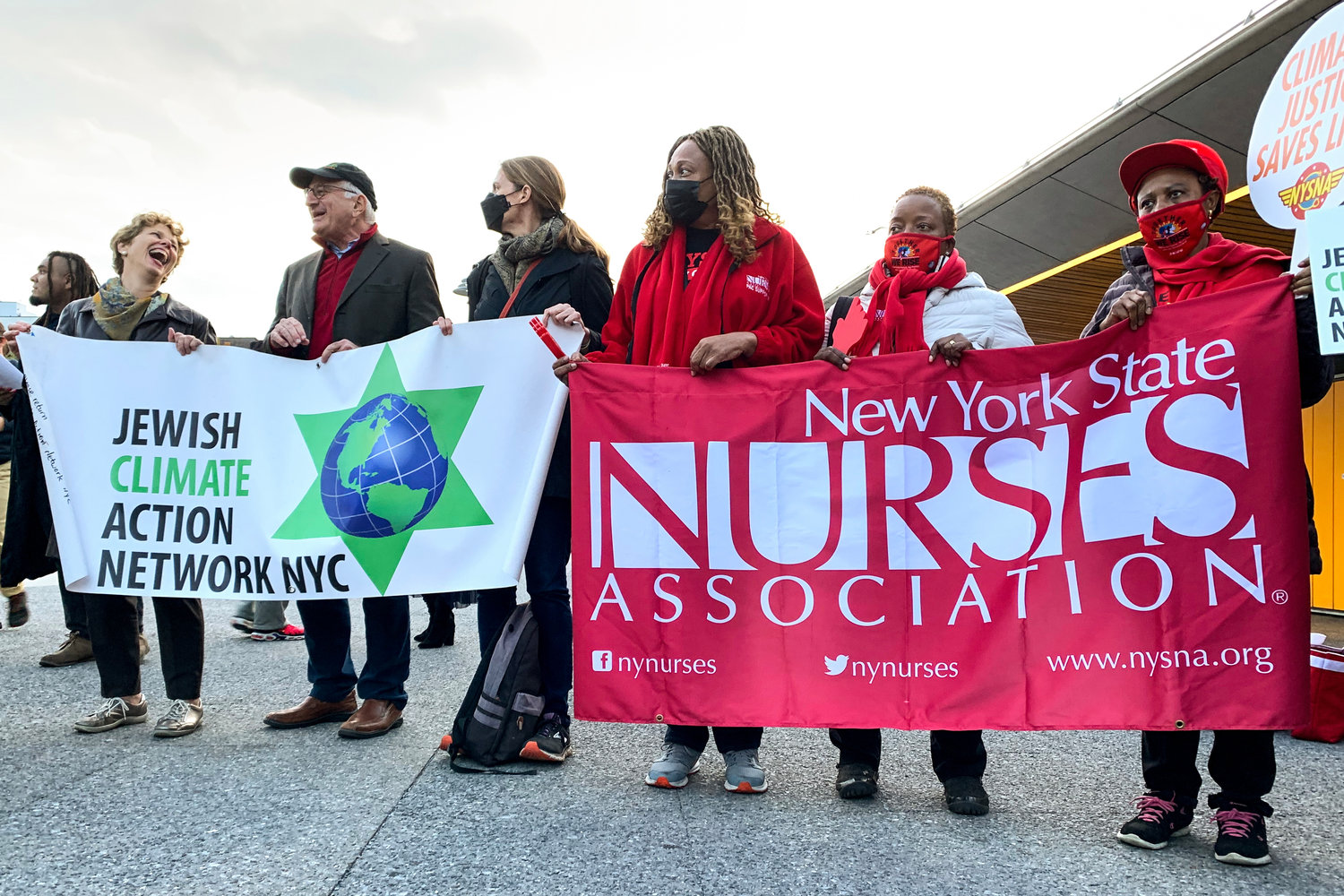 Members of Jewish Climate Action Network NYC, New York State Nurses Association and other community groups rallied for climate justice last week in Fordham Plaza. Those in attendance pushed for passing the Climate and Community Investment Act, intended to tax carbon emissions at their point of entry or when developed in New York.
ETHAN STARK-MILLER 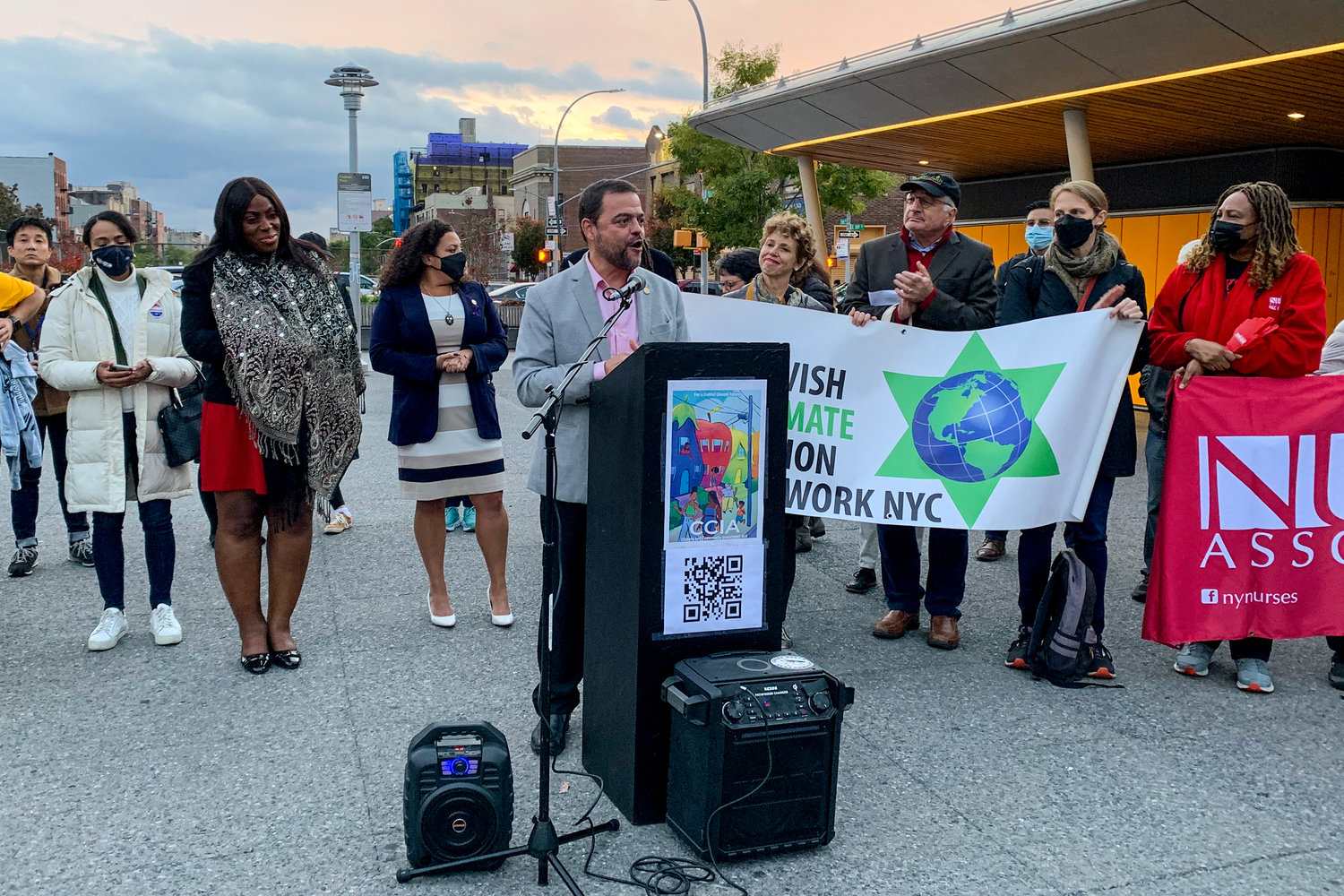 State Sen. Luis Sepúlveda — who represents Hunts Point and other southeast Bronx neighborhoods — spoke about the importance of passing the Climate and Community Investment Act at a rally in Fordham Plaza last week. The bill would impose a tax on carbon emissions at their point of entry or when development in the state.
ETHAN STARK-MILLER 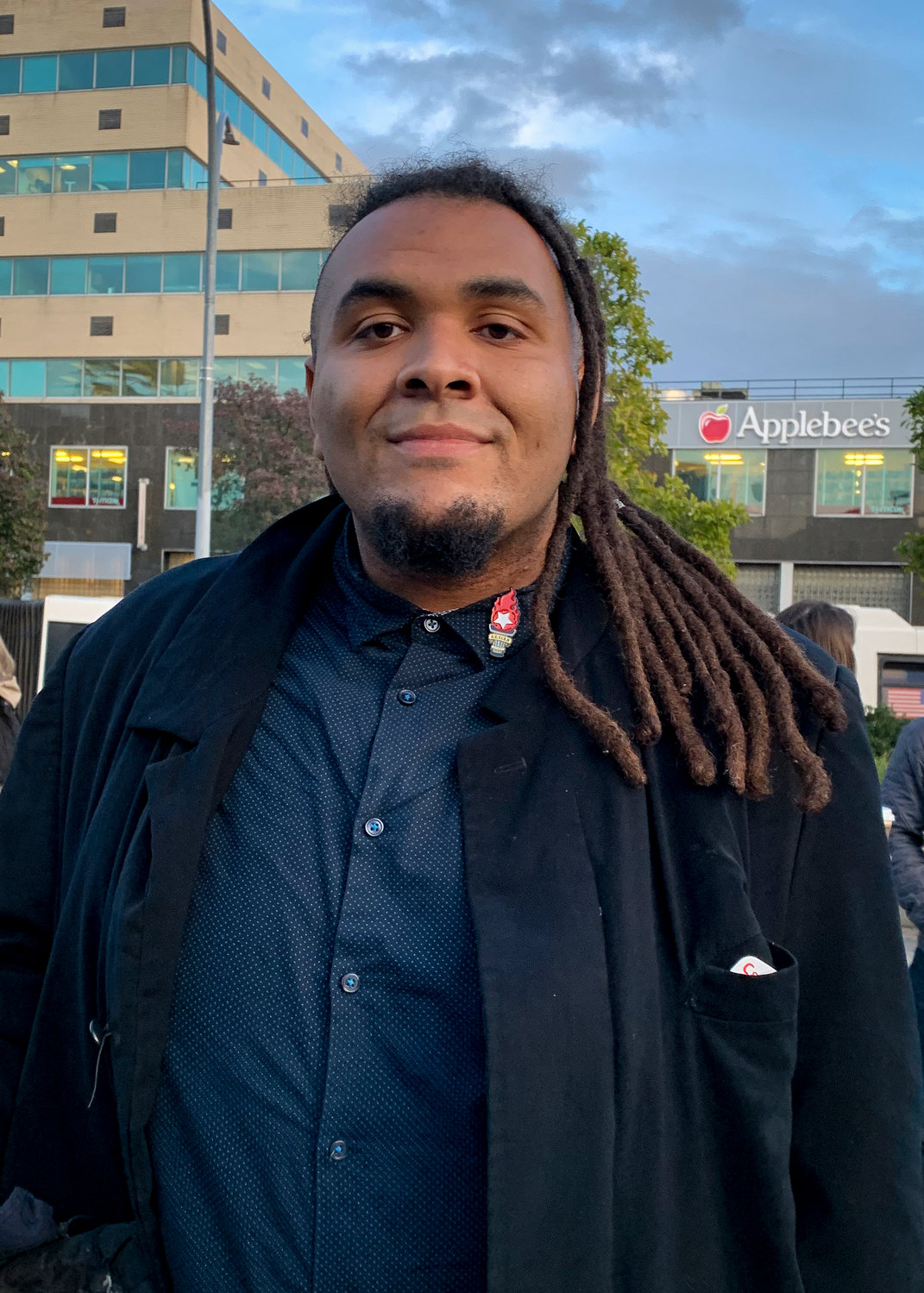 Victor Davila — who leads The Point Community Development Corp. — rallied with several local organizations for climate justice last week in Fordham Plaza. Davila and other advocates pushed for passage of the Climate and Community Investment Act early next year.
ETHAN STARK-MILLER
Previous Next
By ETHAN STARK-MILLER

Growing up in the South Bronx, Victor Davila says he’s been exposed to pollution his entire life. And he’s hardly the only Bronx native to suffer the daily effects of what has been termed “environmental racism.”

“I have asthma,” Davila said. “I have other issues related to the fact that I’ve been poisoned my whole life like most people. The biggest tragedy that you can have in this area is simply that every Bronx child grows up — especially in the South Bronx — with the exact same trauma. The infrastructure screams, ‘We don’t care about you.’ And you can look over to other boroughs and not have that be an issue.”

The pollution, he says, comes from an industrial infrastructure — like highways, factories and power plants — spread across the Bronx.

Adding to the Boogie Down’s years of poor air quality is the relatively new threat of powerful storms believed to be exacerbated by climate change. When the remnants of Hurricane Ida hit the city last September, it submerged the Kingsbridge stretch of the Major Deegan Expressway in what was essentially the resurfacing of the old Tibbett Brook while flooding streets and basement apartments in other boroughs.

The increasing urgency of addressing these disasters is why Davila — a community organizer for The Point Community Development Corp. — joined leaders from other Bronx community groups as well as several elected officials in a rally at Fordham Plaza late last month to do something about it.

“Hurricane Ida barely hit our city and the damage was palpable,” Davila said. “There will be more storms. Your children will experience three times the rate of extreme weather events you did at their age. Yes, climate disaster is a threat to all of us, but some communities face that danger front and center. Decades of neglect have left the Bronx with outdated infrastructure that is extremely exposed to environmental catastrophe.”

The rally’s goal was not only to unite activists from across the Bronx, Davila said, but also to call on the state legislature to pass the Climate and Community Investment Act when lawmakers return to Albany in January.

“Our infrastructure is weak,” Fernandez said. “We cannot take any more storms. Ever since Ida, every time it rains, we’re terrified it’s going to flood, because we know it’s possible. We’ve seen some of the worst, and I don’t want to see any more.”

The act, according to activist Jack Gorman, is designed to provide funding for the Climate Leadership and Community Protection Act, which became law in 2019. Its goal is to reduce the state’s overall emissions to at least 85 percent of 1990 levels by 2050.

“In order to get there, we’re going to have to move rapidly toward establishing sustainable energy,” said Gorman, a member of Jewish Climate Action Network and one of the event organizers. “And that’s what the CCIA bill is for — to essentially provide funding for getting there.”

If signed into law, the bill would impose a fee on carbon emissions, Gorman said, either when it enters New York or is developed here. Fees start at $55 a ton, and are projected to raise $15 billion in annual revenue.

The bill has several provisions designed to direct that revenue toward the development of sustainable energy. Gorman said. This means building solar and wind farms, upgrading the electric car infrastructure, and retrofitting buildings to lower carbon emissions.

Establishing a strong renewable energy sector also could create nearly 150,000 jobs in the decade after the bill’s implementation, Gorman said. It also is expected to fuel rebates for whenever utility companies raise their prices because of the fee while establishing a new state agency to oversee the collection and distribution of this money.

Much of the money raised by the bill is expected to be directed toward the state’s more under-resourced communities, Gorman said — which, of course, includes the Bronx.

In addition to raising money to fund sustainable energy, the climate act also could hold responsible corporations contaminating the air, water and ground.

“I want to see those who caused these problems held accountable and to pay up because we’ve been paying with our lives for generations,” Fernandez said. “Enough is enough. This is the year that I want to see the CCIA passed.”

As a co-sponsor of the bill, Sepúlveda says he’s dedicated to securing a floor vote — not just to clean up pollution in his district, but also for its potential economic benefits.

State Sen. Alessandra Biaggi and Assemblyman Jeffrey Dinowitz are both co-sponsors of the climate act from a more local perspective. With backing from lawmakers like them, Gorman believes the climate act has a good chance of passing.

“I also think that things have changed, even in a year in our appreciation of how dire the climate crisis is,” he said. “Everybody now has fresh in their mind that the Major Deegan Expressway just flooded in the Bronx because of Hurricane Ida. And that we are in peril.

“I think that message that the climate crisis is a real phenomenon is really coming home to our elected officials now. So, I think the chances are pretty good that we’ll get this to move this year.”

CORRECTION: Victor Davila is a community organizer for The Point Community Development Corp. A story in the Nov. 4 edition provided an incorrect title.