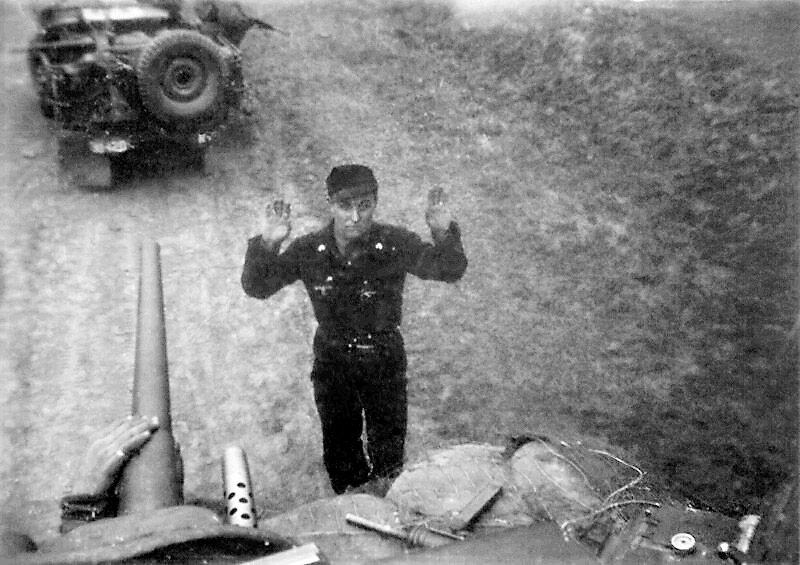 One of the train guards surrenders to U.S. troops. There was no effective resistance when American soldiers arrived.
File photos courtesy of 30th Inf 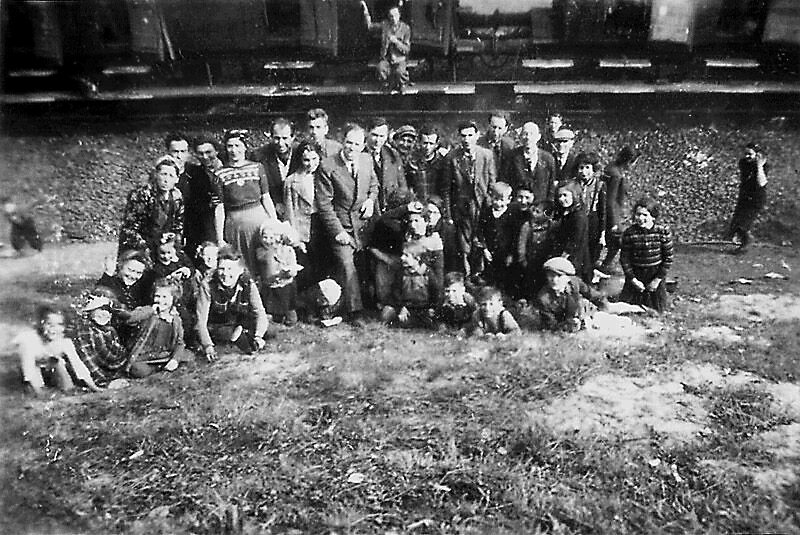 Martin Spett, a Holocaust survivor, believes his family was shown in this picture.
File photos courtesy of 30th Inf 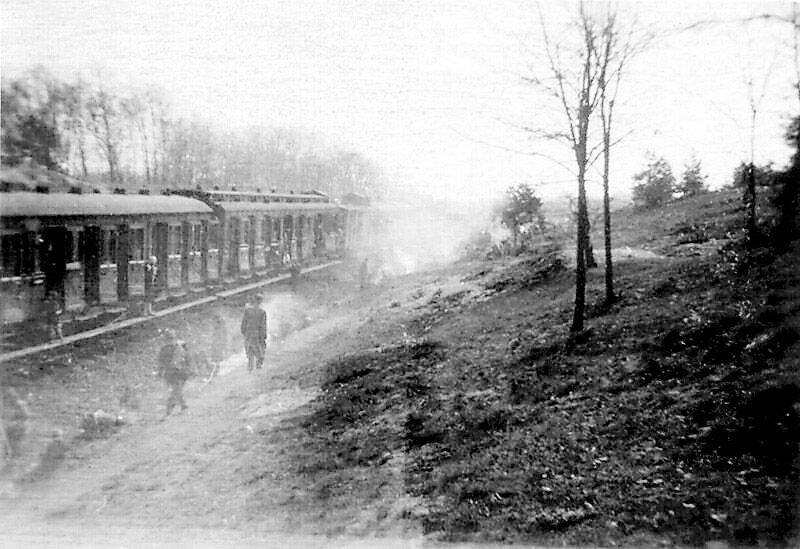 Guards were instructed to drive the train into a ravine. It’s unclear why the orders weren’t carried out.
File photos courtesy of 30th Inf
Previous Next

Nearly a decade before his passing last month at 90, Martin Spett shared his story with then Riverdale Press editor Jason Fields of how his family survived years inside a Polish ghetto, where many of his fellow Jews were killed or shipped out to concentration camps around Europe.

Finding a way to live another day has come from solid hiding places and quick thinking from Martin’s American-born mother.

But as World War II rages on, life inside Tarnow is not getting any easier.

To live, the Spetts knew they would have to leave Tarnow.

Out of the ghetto

It’s now 1943, and life inside the Tarnow ghetto has become intolerable, a place where Martin and his family have been trapped for nearly four years of Nazi occupation.

There is little food or heat during the bitter months of winter. There is, however, plenty of forced labor, random violence, mass executions and truck transports with hundreds, even thousands never heard from again.

Into this gray existence comes a call for any Jews still alive who have passports or other documentation from the Allied nations — England, America — to present themselves to the Gestapo for a chance of salvation.

A similar call when the occupation began had been met with the slaughter of those who stepped forward. But for the Jews of Tarnow, all that is left are choices between the means and methods of death. Even a false glimmer of hope offers a chance that must be taken.

Martin’s mother had been born in America and stranded in Tarnow on a family visit. Her father had business back in the United States and boarded a ship back home in 1895, intending the rest of his family to follow later. Instead, his ship sank, as did her family’s dream of moving to America.

She may have stayed in Poland, but Martin’s mother held tightly that scrap of paper — her American birth certificate — that could now move her own family out of harm’s way.

After years of lies and death, it seems that finally, this Nazi promise of salvation was true. Martin and his family are told to return the next morning at 10, with one suitcase each. That, of course, is not difficult. Everything the family owns has been used or sold in the effort to live one more day.

Martin, however, exchanges life in the ghetto in Tarnow with a cell he shares with his father in Krakow, embraced by screams, surrounded by torture, all while waiting for their turn to join that hell.

Martin’s mother and sister are elsewhere, maybe bloodied, or raped … or dead.

Once a week the men shower, the lone chance for Jews to meet other Jews, many missing ears, noses, or bearing horrific scars.

The nine weeks of prison end in the courtyard, where executions take place. Martin and his father are fearfully reunited with his mother and sister, the entire family lined up against a wall, their backs to the soldiers, their hands reaching high.

Laughing, the men in black and gray playfully pantomime murder, although the bullets never come, rifle hammers falling only on empty chambers.

Instead, the prison doors open, and the Spetts are put on a passenger train. After years of nothing, they are fed bread, butter and jam. Martin’s memories and imagination fall away, inadequate to the reality. The food is gone in an instant.

A uniformed commandant appears in the train car, a briefcase at his side. In it is paperwork that all aboard must sign, giving up their claims to family homes and land held for centuries. Theft is not enough, forms must be filed.

They are told the train is bound for Portugal. The Jews will be exchanged for German prisoners of war. The generosity of the jam makes the story easy to swallow.

In what feels like only a few hours, Martin is in Berlin, displayed before the crowd at the railway station, a true novelty: A Jew who is still alive.

Back onto the train, more cars are attached with a dull thud, filled with more Jews.

The train pulls out of Berlin, but stops shortly thereafter. Portugal was an illusion, after all.

SS troops are standing outside the train.

Everyone is afraid. No one will leave the train, despite the call for them to disembark.

Still, nobody moves. So men in gray with lightning flashes on their collars board the train, using the butts of their rifles to force men and women — who have become nothing more than cargo again — into a straight line beside the rail cars. When one soldier says to another that one machine gun will be enough, there is no doubt about what is happening.

Everyone is loaded onto trucks, which rumble into the forest nearby. Martin’s father says the Kaddish, the prayer for the dead, knowing what is coming.

But one more time, death does not come.

The trucks pull up at the gates of a camp meant to house prisoners of war, but has now turned into another purpose. Fresh barbed wire glimmers in sunlight.

Martin and his family arrive at Bergen-Belsen.

It’s April 1945, and the gears of Bergen-Belsen grind out death and pain in the nearly two years Martin has spent there. But that time is ending.

The 400 adults and children that remained are forced on a seven-mile march to a train. Martin is nearly carried by his mother and father. He has double pneumonia and is choking in his body’s fluids.

They finally get to the train, but there are no seats. Only room for cargo.

The Jews of Bergen-Belsen join 2,100 survivors of other hells.

Once a day, everyone is taken off the train for a half hour to eat a “soup” made of potato skins and lukewarm water.

The guards eat the potatoes.

The train changes tracks often over six days, trying to make its way to Theresienstadt in occupied Czechoslovakia. Instead they end up just 70 miles from where they started, near the German town of Madgeburg. Allied bombing has prevented further travel. At night, the silvery chaff dropped from planes to fool German radar obscure the stars.

There are hundreds of guards with the train. The German commandant heads to town to receive fresh orders. He returns out of uniform, riding a bicycle and waving farewell to his former charges.

Seventy men are left to guard the remains of 2,500 starvelings.

Rumbling in the forest. Trees shake. The ground does, too. Metal clangs, gears scream. Liberty and life are encased in iron.

A young lieutenant, Carrol Walsh, opens the hatch and climbs down, rifle slung across his chest. He walks toward the train.

A guard, a Pole in German uniform, raises his gun and takes aim. Jews with strength left in their bodies leap down from the train and onto him.

The Jews ask Lt. Walsh to take the guard’s life. After all, he tried to kill the American.

“We have orders to take prisoners,” the officer says.

The words of mercy wash over the 2,500 Jews — including Martin and his family — who have known so little of it for seven years.

Martin Spett, who shined the light of truth on the Holocaust, dies at 90
A journey into horror, and the man who survived it all (Part 1)