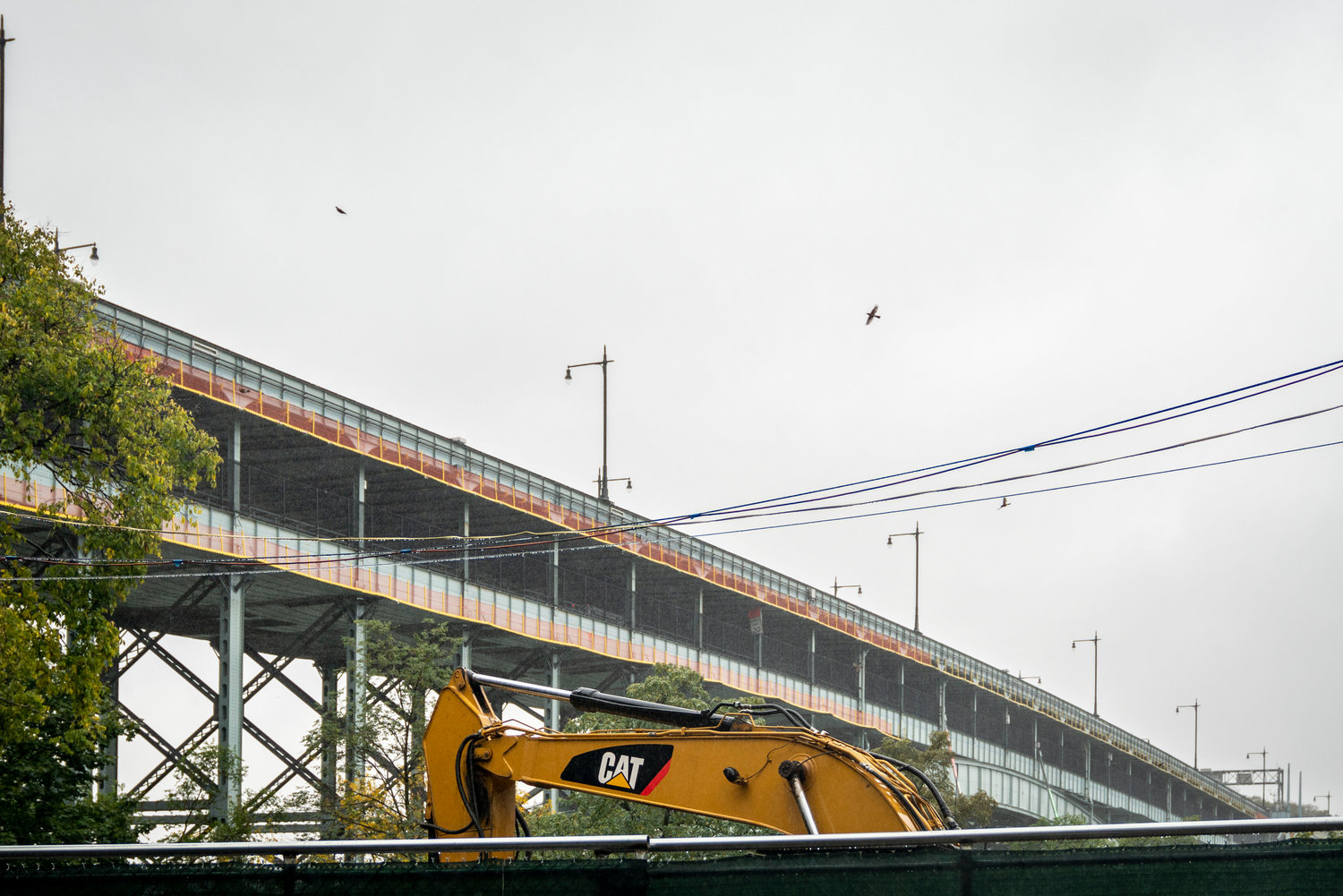 With the Henry Hudson Bridge in the background, all that’s left of the former Villa Rosa Bonheur apartments is a yellow crane ready to prepare the Palisade Avenue site with a new apartment building. Jeff Torkin, the local businessman who is leading the development, says he has no apologies for trying to bring more homes to Spuyten Duyvil.
HIRAM ALEJANDRO DURÁN 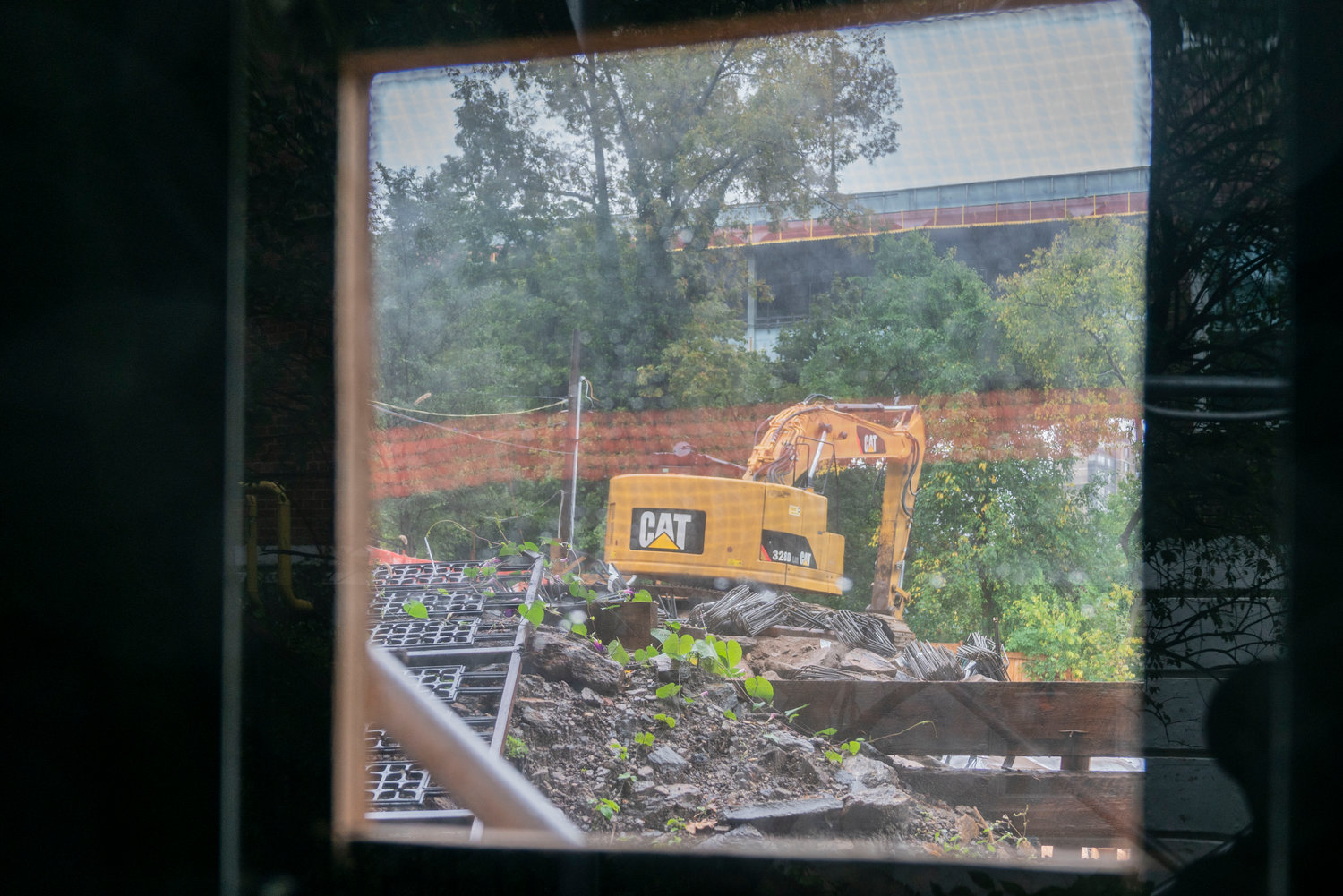 A crane rests above the rubble where Villa Rosa Bonheur used to stand on Palisade Avenue. The property is one of two sites where a development group led by Fieldston’s Jeff Torkin has planned new apartment projects — projects which have met with a considerable level of controversy.
HIRAM ALEJANDRO DURÁN 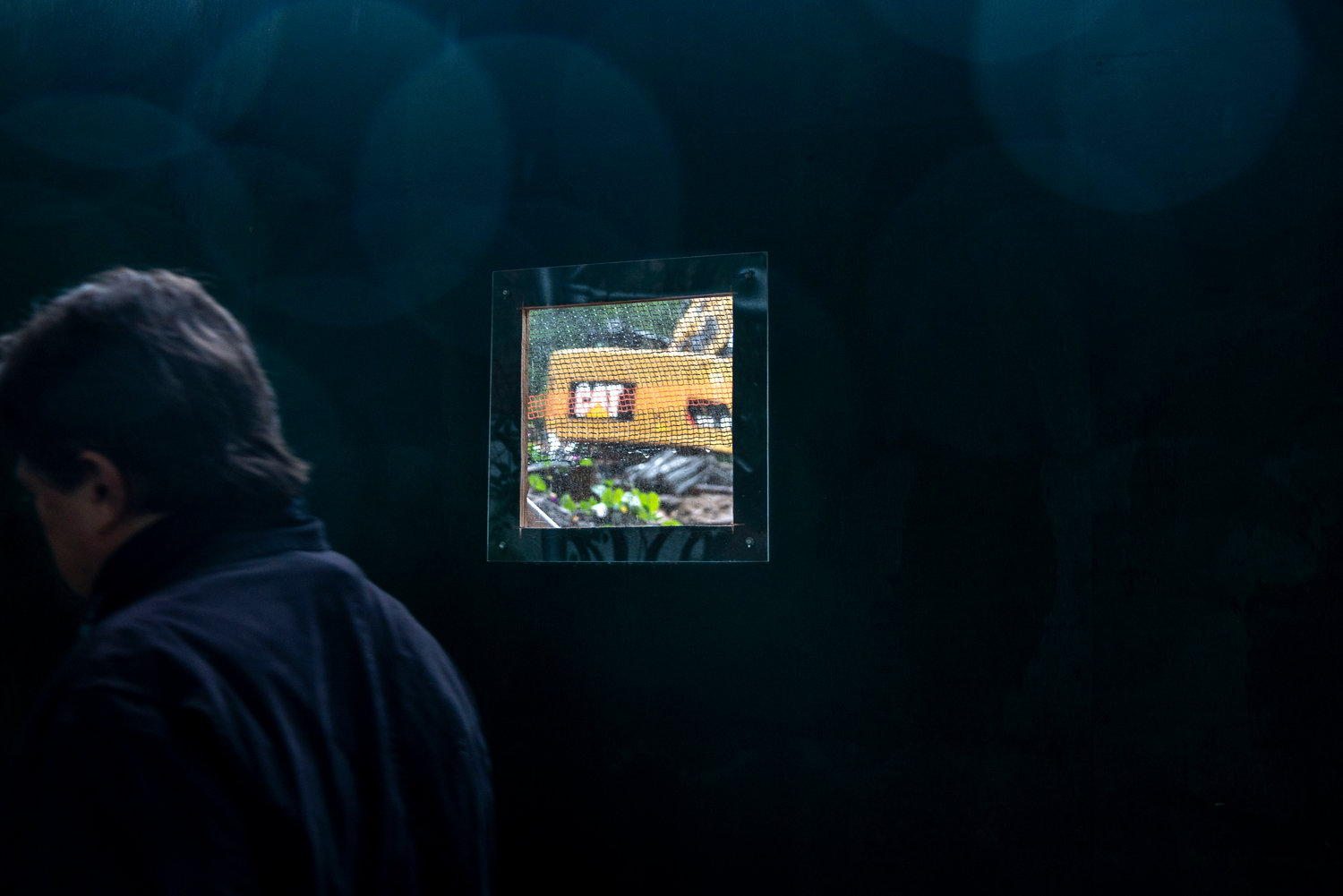 A pedestrian walks past the construction site where the Villa Rosa Bonheur once stood on Palisade Avenue during a rainy Monday afternoon. Plans are to build a 55-unit apartment building on the site along the Spuyten Duyvil Creek.
HIRAM ALEJANDRO DURÁN 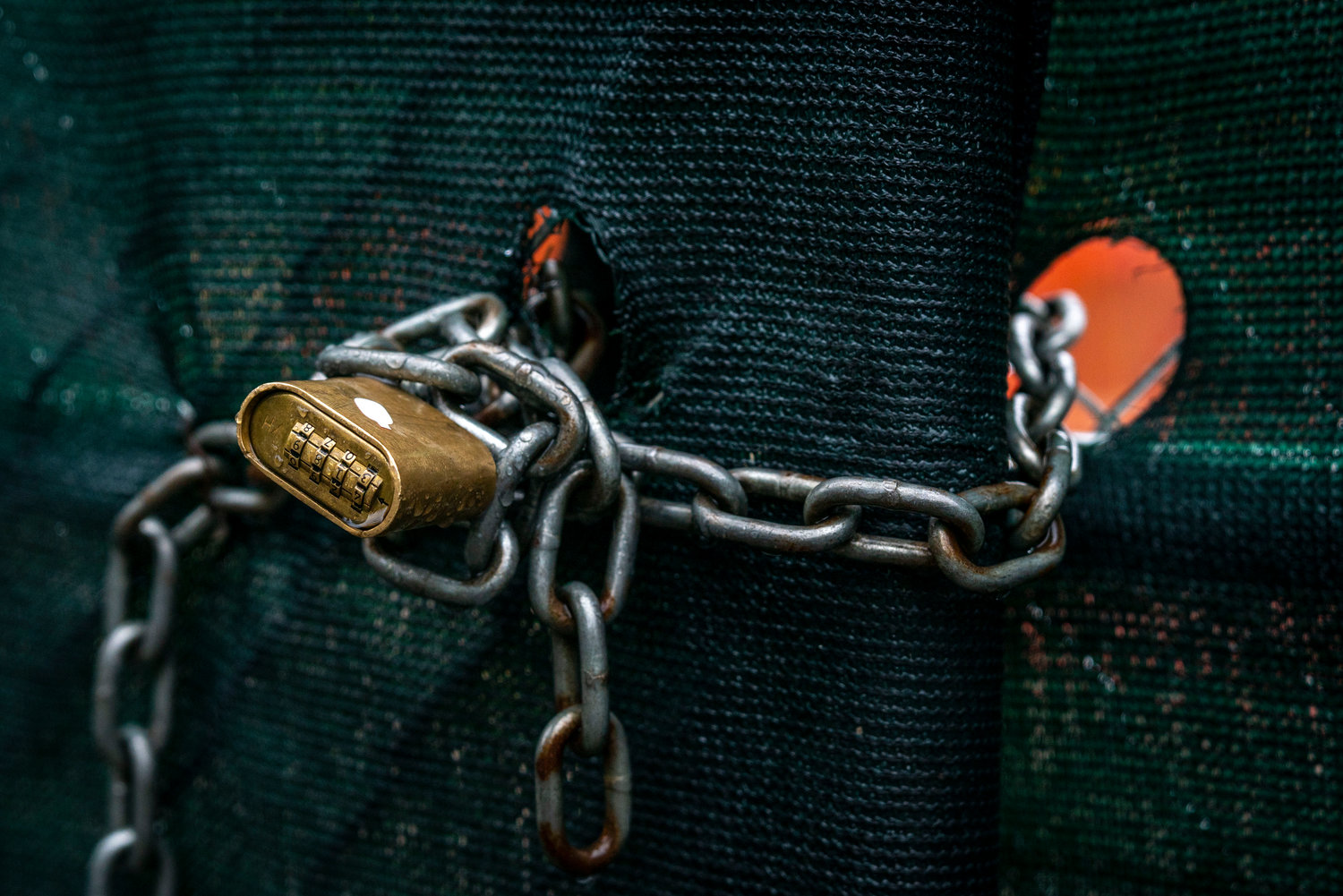 A lock holds the construction gates shut at the Palisade Avenue construction site that was once home to the Villa Rosa Bonheur. A development group led by Fieldston’s Jeff Torkin plans to build a 55-unit apartment building on the site — a project that has brought considerable controversy from his neighbors.
HIRAM ALEJANDRO DURÁN 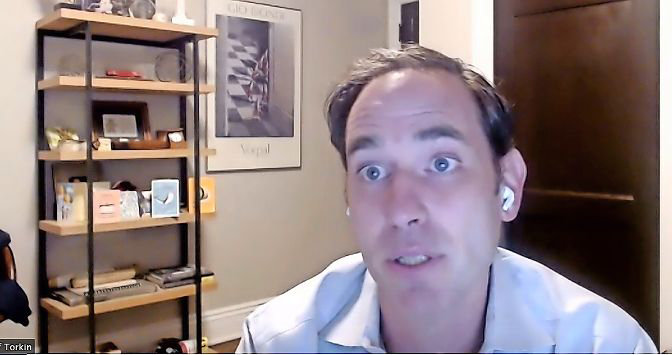 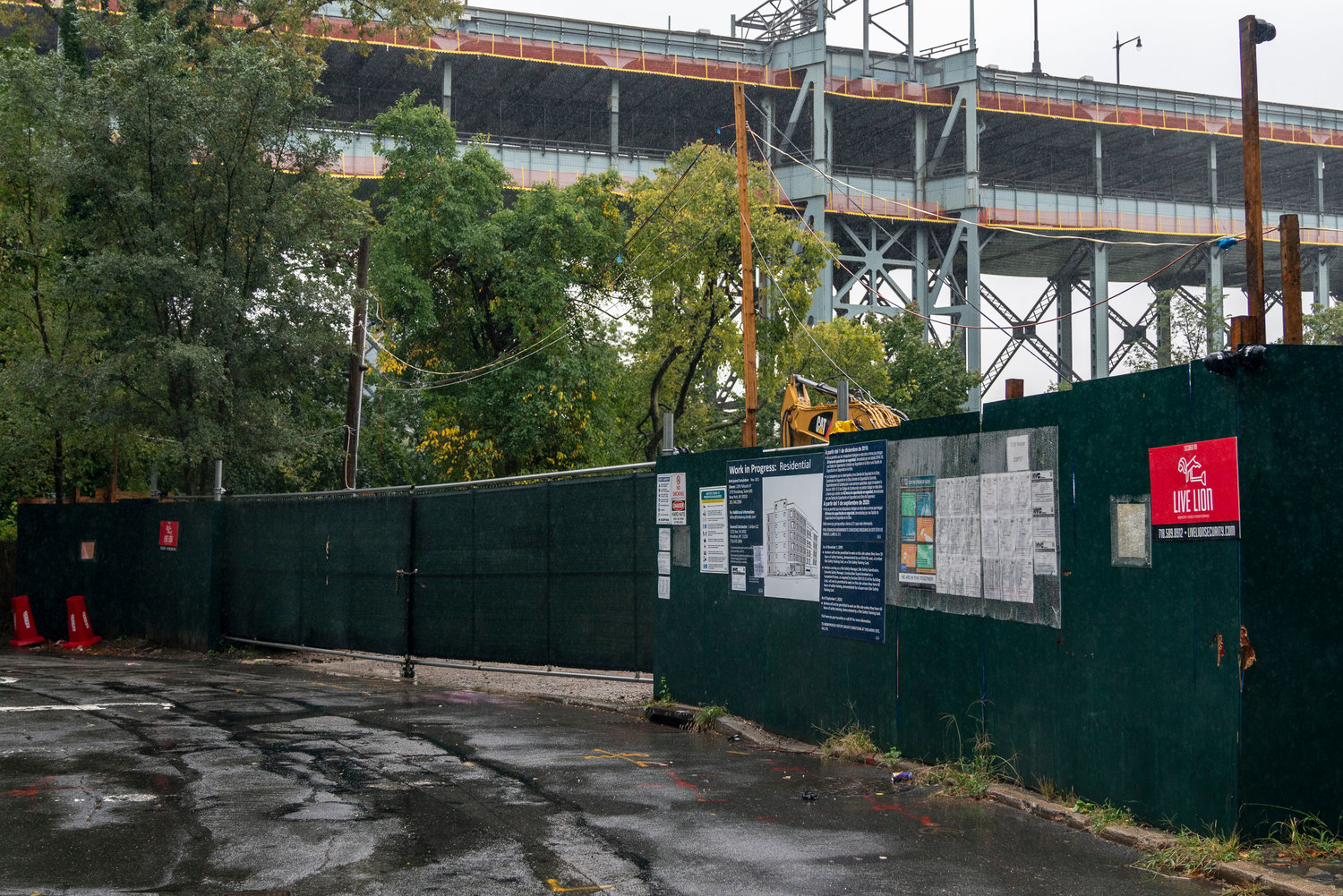 Construction is beginning on the Palisade Avenue site where Villa Rosa Bonheur once stood. Plans are to build a 55-unit apartment complex on the land overlooking the Spuyten Duyvil Creek.
HIRAM ALEJANDRO DURÁN
Previous Next

They weaponize or misrepresent the most benign information we share if they feel it will assist them in the court of public opinion. I don’t think anybody at this hearing would dispute that.”
Jeff Torkin
By MICHAEL HINMAN

Jeff Torkin was never really one for the spotlight. Even as a development group he led started spending hundreds of thousands of dollars acquiring land not far from his Fieldston home in the hopes of developing it, the plan seemed to be more to focus on his company Timber Equities than on him.

But it wasn’t just any property Torkin’s team was buying. He first went after what some describe as the historic Villa Rosa Bonheur apartments on Palisade Avenue overlooking the Spuyten Duyvil Creek. Although initial permits called for simply an interior demolition of the century-old building, rumors persisted that the entire structure was coming down.

When workers started dismantling the roof, neighbors cried foul — but it wasn’t enough to save the structure. And now a 55-unit apartment building is being constructed where the Bonheur once stood.

Then there’s 3893 Waldo Ave., just outside of Manhattan College’s campus, where an unremarkable single-family home is set to be razed, making room for 29 apartments and 10,000 square feet of “community space.” Neighbors near that project aren’t worried about the house as much as they are nearby Brust Park, which they claim Torkin’s building will tower over, and ultimately block much-needed sunlight for the plant life there.

Along the way, Timber Equities has had to dodge accusations of mishandling toxic construction material like asbestos, and doing work without permits. But Torkin visited a recent Community Board 8 land use committee meeting with the hopes of putting some of those claims to rest once and for all.

“I’m sure you’re not going to love everything I have to say, and I would argue that this board has a tendency to propagate rumors as well as some of the members in the community,” Torkin said. “But I do look forward to getting to a point where we can talk constructively about how to make improvements in the community because we truly feel that the buildings that we’re building are going to be best in class.”

Torkin challenged claims Timber Equities hasn’t been transparent about its plans, telling land use chair Charles Moerdler someone from the development team has been present at nearly every meeting where these two projects have come up. Torkin says his team also has met with some of the advocacy groups in both communities, answering questions and trying to work through various issues they have with the apartment building projects.

Timber Equities spent 18 months negotiating what Torkin described as a “protection arrangement” with the co-operative at 3875 Waldo. During those talks, “very detailed information” was shared with its board members, he said, including detailed plan renderings. He also offered “generous compensation” to the co-op for what he said were “very little intrusions on their property.”

Despite these efforts, Torkin said those who weren’t part of those negotiations have instead dragged his name through the mud.

“As the saying goes, ‘no good deed goes unpunished,’” Torkin said. “Our neighbors and the associated advocates relating to Brust Park and Villa Rosa have made clear that they will use any means available to them to delay or prevent our projects. They weaponize or misrepresent the most benign information we share if they feel it will assist them in the court of public opinion. I don’t think anybody at this hearing would dispute that.”

Developer not being forthcoming

Jim Wacker might dispute that. He’s been one of the more vocal neighbors opposed not only to 3893 Waldo, but any new major development inside the boundaries of Community Board 8. He believes the site is not a corner lot as the developer claims, nor that the building proposed will be four or five stories — but instead eight stories, since some of the lower levels will be considered below street level, but on the side of a cliff near Dash Place.

“The community has made it clear that it doesn’t want this,” Wacker said. “But it’s still advancing nearly 30 new buildings, and a huge increase in traffic shows that the laws aren’t protecting our environment. They were written long ago by real estate investors, and ultimately do what they want.”

Also opposing 3893 Waldo is Aurora De Armendi, who feels Timber Equities is simply misleading neighbors — and ultimately city officials — which she says is evidenced by the controversy surrounding asbestos. Some neighbors claim asbestos was present not only at Villa Rosa Bonheur in Spuyten Duyvil, but also at the single-family home slated to be demolished at Waldo.

If asbestos is not handled properly, De Armendi says she fears it will have an adverse effect on anyone walking through the neighborhood.

“We are very concerned about the visitors going into Brust Park,” De Armendi said. “The rumors of asbestos spread really quickly because you have had a lot of violations about asbestos at Villa Rosa.”

Although the city’s buildings department received some complaints about potential asbestos on site, no citations were issued against the developer related to asbestos, according to DOB records — something Torkin reinforced, claiming the limited amount of asbestos found in the basement of Villa Rosa Bonheur never posed a safety threat.

“That is no excuse whatsoever for the unfounded allegations and false statements by these various self-interested parties,” Torkin said. “In many instances, these allegations are amplified by the board.

“I don’t mind the political theatre. I enjoy it. Broadway is dark. But it does raise questions of credibility.”

Many of those rumors could be quashed if Timber Equities just communicated more frequently — and more freely — Moerdler said.

“Deal with your neighbors so that they know what’s going on, and are not bitten by the rumor mill because it does you no good,” the land use chair said. “It does them no good, and certainly doesn’t do the board and the elected officials any good.”

Although a fence has been constructed at Waldo, demolition has yet to start of the single-family home that still exists there. At Palisade Avenue, Villa Rosa Bonheur is gone, but the planned apartment building there has yet to go vertical.

How much Timber Equities might talk with neighbors from this point forward is up in the air, however. Especially since Torkin has made it clear he’s no longer engaging many of the people opposed to his projects — at least as far as the Palisade apartment building is concerned.

“I don’t expect this is going to put an end to the allegations about us being reckless and disgraceful,” the developer said.

“But we have no intention of litigating this matter any further, and we’re simply going to disregard future references or criticism to the demolition of the Villa Rosa.”