All of this comes after U.S. State Department holds espionage meeting 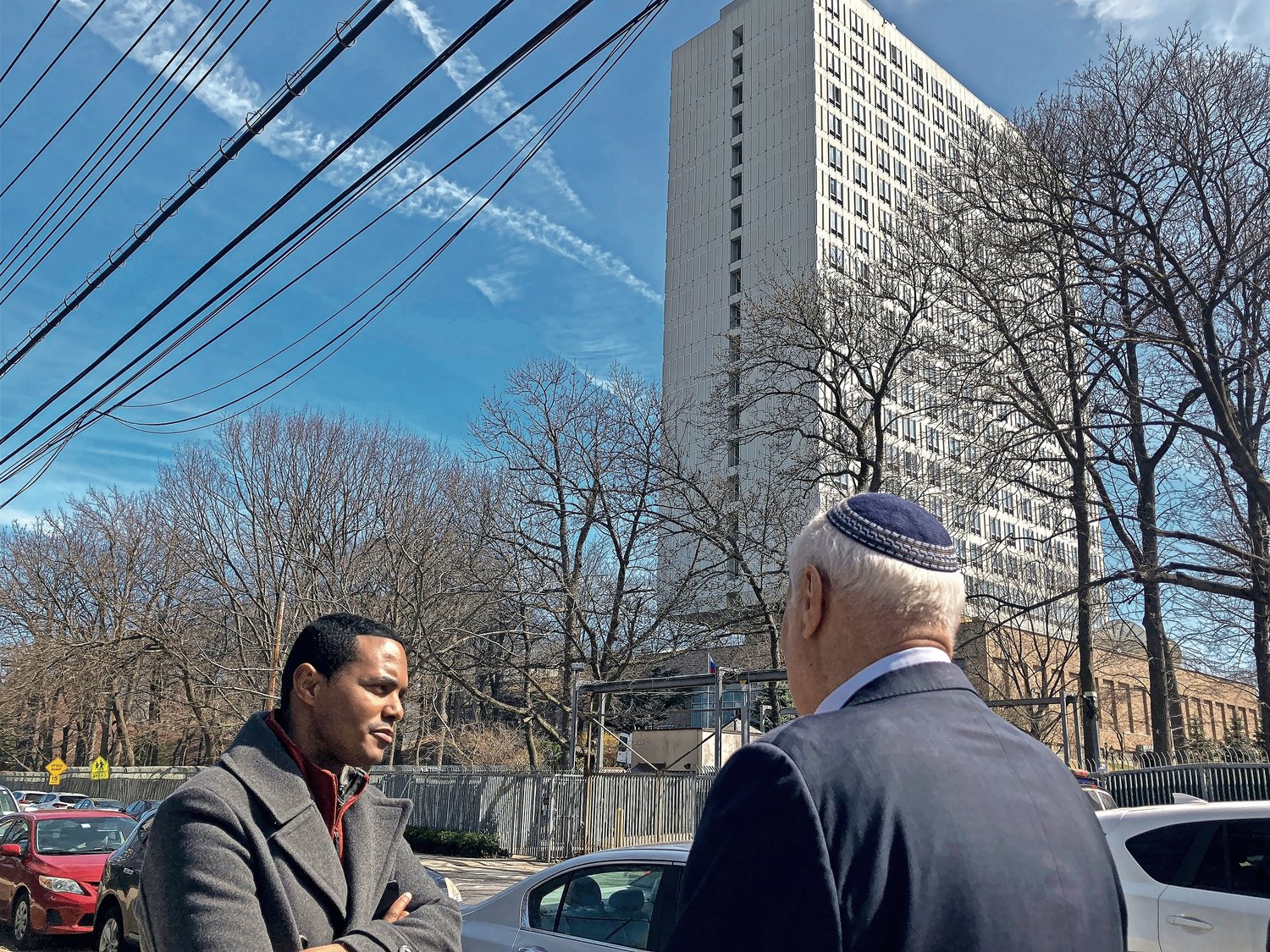 U.S. Rep. Ritchie Torres, left, meets with Rabbi Avi Weiss outside of the Russian Mission compound on North Riverdale's Mosholu Avenue in March. Torres wants the FBI to investigate whether the diplomatic residential complex that towers over the Riverdale Library and the Riverdale Neighborhood House also serves as home to spies loyal to Russian president Vladimir Putin.
SACHI McCLENDON
By Sachi McClendon

U.S. Rep. Ritchie Torres on July 27 in a letter to the FBI called again for the law enforcement agency to investigate the Russian Diplomatic Compound in Riverdale after concerns were raised that the towering complex is harboring Russian spies.

“Given the heightened risk of Russian retaliation against the United States for aiding the Ukrainian struggle for self-rule, the FBI should strongly consider assessing whether the presence of the Russian Diplomatic Compound in the Bronx threatens the national security interests of the United States,” Torres wrote.

The congressman’s latest call for action came soon after the State Department held a classified briefing about the Cold-war-era compound on July 22, according to The Daily Beast which broke the news of the meeting.

Back in March as the Russian invasion of Ukraine entered its fourth week, the congressman spoke in front of the building on the corner of West 255th Street and Mosholu Avenue, urging for the bureau to launch a probe into who lives there.

“It is literally the highest building at the highest point in the north Bronx. And it is both metaphorically and literally a structure of surveillance.”

To back up his claim, the congressman referenced the 2015 deportation of Evgeny Buryakov, a Russian banker living right next to the compound who was prosecuted for moonlighting as a spy for the Russian government.

This most recent letter, in contrast to the one in March, is more specific, outlining why the complex falls under the bureau’s bailiwick. According to Torres, one agency within the State Department — the Office of Foreign Missions — is mandated to regulate the activities of foreign missions. The FBI, in turn, is directed to help guide the OFM in any investigation by launching a national security assessment of the mission.

“It is wrong for the FBI to claim, as it has done in the past, that it has no jurisdiction,” the congressman wrote. “The Foreign Missions Act specifically mentions the Director of the FBI and contemplates a critical role for the FBI in assessing the national security risks of foreign missions.”

And the OFM would need the FBI’s help. A former U.S. diplomat told The Daily Beast the office doesn’t have nearly enough resources to conduct such an investigation alone.

Torres — who will most likely represent the newly drawn district 15 next year — cited several story that reported members of Russia’s Foreign Intelligence Service and military intelligence agency reside at the compound.

“When it comes to the foreign mission in the Bronx, the FBI has been missing in action,” he said. “The time has come for the bureau to break its silence and reveal the truth about the national security risk posed by the Russian Diplomatic Compound in the Bronx.”

The complex first came on the congressman’s radar after he received a wave of complaints from neighbors feeling as if they have been kept out of the loop on what’s really transpiring inside the gated building. In fact, security is so tight that even after a fire broke out at the mission, the New York Fire Department wasn’t granted access inside.

Yet according to a New York Post article, some in the community already suspect that the FBI operates a house across the street that’s used to keep tabs on those there.

Torres also introduced legislation earlier this year to squeeze the Russian economy thereby putting economic pressure on president Vladimir Putin to pull out of Ukraine. His bill, the Reveal Risky Business in Russia Act, would require U.S. corporations to disclose all their business dealings in Russia. If passed into law, any publicly traded company would have to report such business to the Securities and Exchange Commission.

“And if you fail to make the disclosures required under federal law, you could be held liable civilly,” Torres said at the conference. Torres introduced the legislation after Ukrainian president Volodymyr Zelenskyy beseeched American companies to pull out of Russia.

The FBI did not respond to a request asking whether it would launch a security assessment of the building.