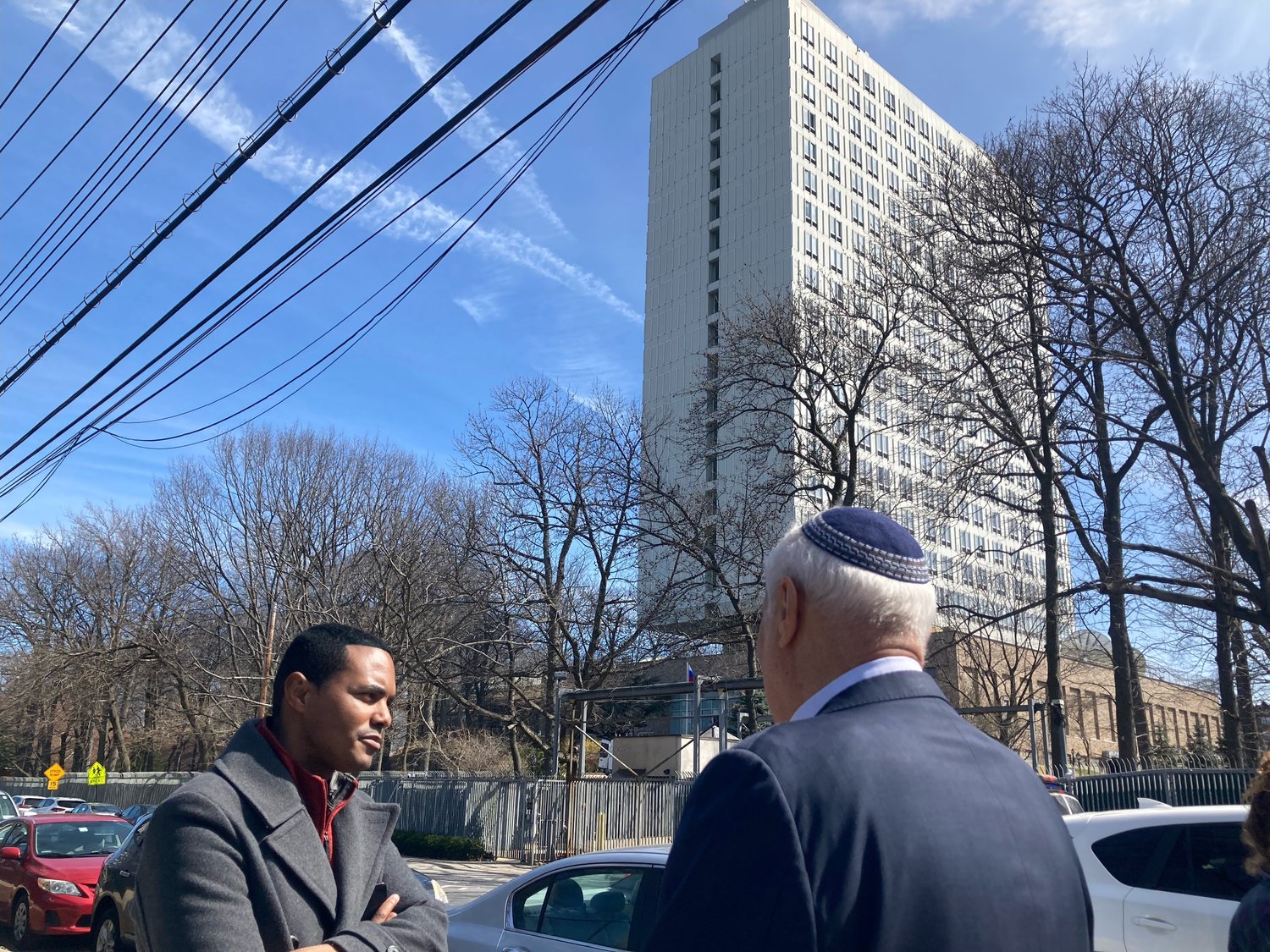 U.S. Rep. Ritchie Torres, left, meets with Rabbi Avi Weiss outside of the Russian Mission compound on North Riverdale's Mosholu Avenue. Torres wants the FBI to investigate whether the diplomatic residential complex that towers over the Riverdale Library and the Riverdale Neighborhood House.
SACHI McCLENDON
By SACHI McCLENDON

U.S. Rep. Ritchie Torres on Tuesday urged the FBI to launch an investigation into whether the Russian Diplomatic Compound in Riverdale houses several Russian officials who he believes to be intelligence operatives.

Torres, the Democrat representing the redistricted 15th District, spoke in front of the Cold-war-era compound on the corner of 255th Street and Mosholu Avenue as the Russian invasion of Ukraine drags into its fourth week. At the same time more businesses and agencies with ties to the Russian state are being scrutinized.

Torres added he was spurred to action after receiving a wave of complaints from neighbors feeling as if they have been kept out of the loop on what’s really going on inside the compound. “Russia has emerged as the single greatest threat to the national security of the United States,” he said. “And so we in the Bronx can no longer afford to be in the dark about espionage in our own backyard. Russian espionage must be exposed wherever it exists, and it must be expelled wherever it is exposed.”

When Torres, who is the vice chair on the House Committee of Homeland Security, wasn’t railing against Putin and his invasion, he found time to push a new bill of his: the Reveal Risky Business in Russia Act, which would require US corporations to disclose any of their business dealings in Russia. If passed into law, any publicly traded company would have to report such business to the Securities and Exchange Commission.

“And if you fail to make the disclosures required under federal law, you could be held liable civilly,” Torres said at the conference. Torres has said he introduced the legislation after Ukrainian president Volodymyr Zelenskyy urged US businesses to pull out of Russia — something that hundreds of American businesses have already begun doing.

Rabbi Avi Weiss, who joined Torres Tuesday, said he does not trust any of the diplomats within the compound. “If I’m a diplomat working for Putin — and I’m pushing papers that support what he’s doing — I’m accountable,” he told The Press. “That’s what the Nuremberg trials showed. Onlookers are as guilty. You are complicit.”

The street outside the fenced-in compound has played host to several protests since the start of the war. Rabbis, community leaders and holocaust survivors have all stood in support of Ukraine over the past few weeks, with Weiss declaring at one point that everyone, regardless of nationality, was Ukrainian in this moment. And at that same protest, Ukrainian nationals emptied bottles of Russian vodka outside the compound as they sang songs from their homeland.

Yet at Torres’ event Tuesday, there was no one on the other side of the fence to listen to Torres’ call to arms, save the scattered leaves and slender trees.

It’s also unknown if the FBI is listening to what Torres has to say. The bureau did not respond immediately to say whether it would launch a probe into the compound and its residents, many of whom are just family members of Russian diplomats.

That said, it’s unclear why Torres assumes that the FBI, which is tasked with sniffing out spies, wouldn’t already have open files on those living within the compound. When asked by The Press why he assumes there is no such investigation already underway, Torres replied, “I’m making no assumptions … given those reports, it would be irresponsible not to request an investigation,” adding that he also sent letters to the CIA, the director of National Intelligence and the Department of Homeland Security, asking for any information they might have on the compound.

Some nearby neighbors already suspect that the FBI operates a house across the street from the compound that’s used to keep tabs on those within, according to a 2018 New York Post story.

Rumors have swirled around the compound ever since it was built back in the 1970s. Back then, the U.S.S.R. constructed the building from top to bottom — placing floors beneath one another — so as to prevent U.S. intelligence agents from placing spyware within the building, some have alleged.

Even though the U.S.S.R. has since crumbled, the Russian Mission has survived through the years. And as chance would have it, one of the few Americans ever to have stepped foot on the property, former Press reporter Sol Solomon, passed away earlier this month. Solomon was interviewing Frank Montero, a vice president for the company constructing the building, who told him the view from the top of the compound was the best in the city.

As Torres gave his closing remarks on Tuesday, a landscaper with the Russian Mission swept up leaves outside the side of the compound. He wouldn’t respond when asked about his views on the conflict overseas.