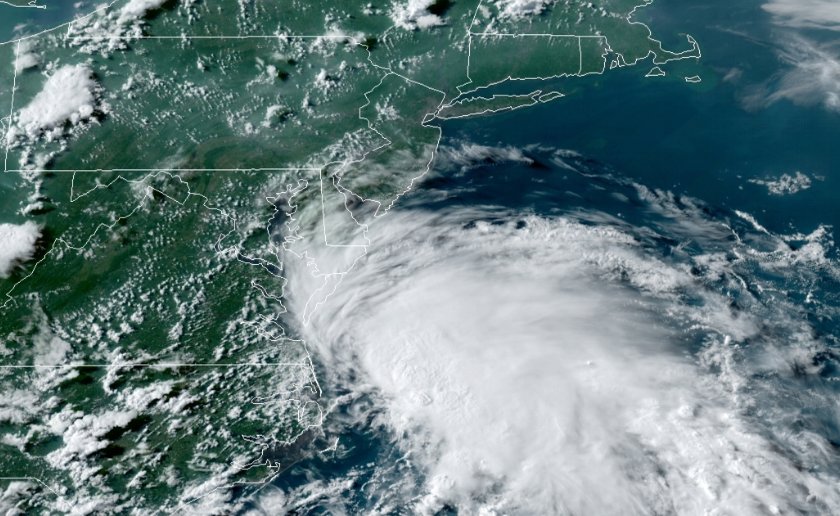 New York City and much of the coastal northeast is under a tropical storm warning until late Friday evening.
Courtesy of NOAA / NESDIS Center for Satellite Applications and Research
By MICHAEL HINMAN

Tropical Storm Fay has formed off the coast of North Carolina, and it could be gunning for New York City as early as this weekend.

The National Weather Service has issued a broad tropical storm warning for good portions of the coastal northeast, including New York City, believing the region could see winds between 30 and 40 mph, and gusts up to 50 mph, by Friday afternoon and into the evening.

Because such storms are unpredictable on how strong they will become — or what path they will take — weather officials warn that Fay could carry winds as high as 57 mph, and because of that, residents and businesses should plan or hazardous winds, and seeking shelter where necessary. Such damage could affect porches, awnings, carports, sheds, unanchored mobile homes, and unsecured lightweight objects.

Large tree limbs could also come down, and possible some smaller trees could be uprooted, officials said. There also could be scattered power and communications outages.

There also is a flash flood watch in effect, although peak rainfall is expected to be no more than 3 inches.

Fay — the sixth tropical storm to form this season — is currently located just a few miles from the outer banks of North Carolina as of 5 p.m. on Thursday, traveling north at 7 mph, with winds of 45 mph.