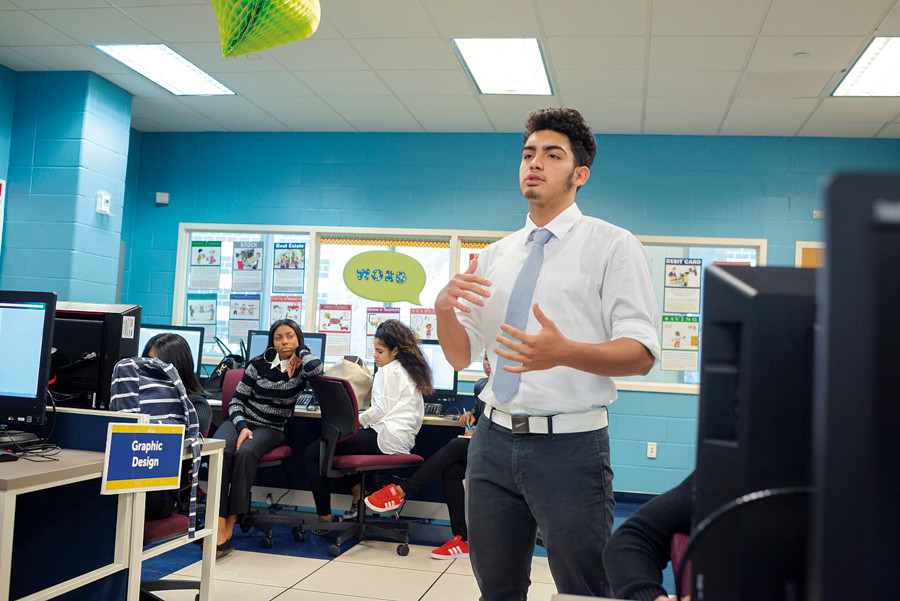 Alejandro Furniel, a senior at IN-Tech Academy, speaks to his class about an upcoming digital business project in a Virtual Enterprise class on Oct. 5. As the COO of the project, he explained to his classmates the requirements of the business plan and marketing strategy that they would be implementing over the coming months.
Adrian Fussell / The Riverdale Press 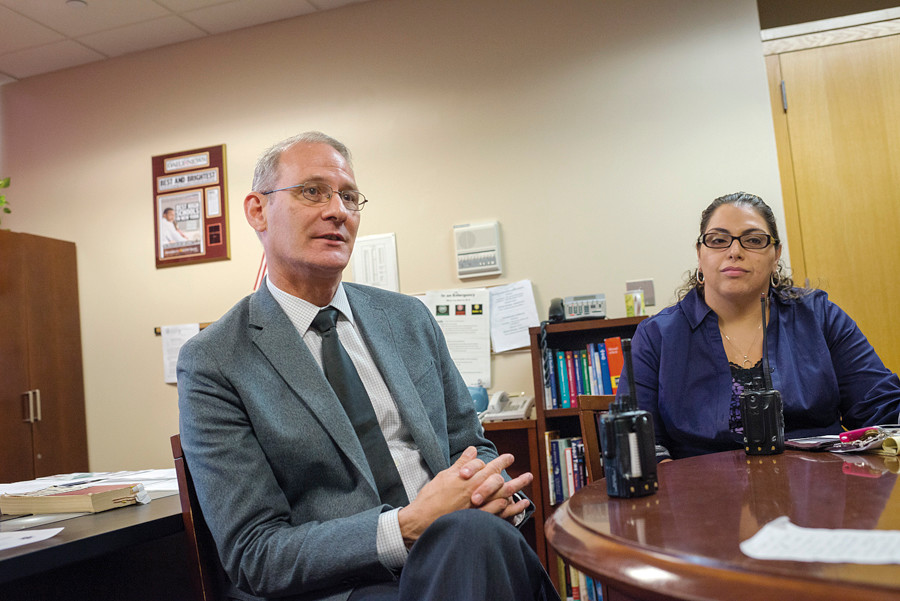 Only 10 percent of city schools currently have a computer science program, and those only reach one percent of the students, according to the Department of Education (DOE). That arguably makes Mayor Bill de Blasio’s recently announced goal of providing a computer-science education for every public school student within 10 years, called "Computer Science For All," a tall order.

With any tech-based education, one crucial factor is simply getting students in front of a computer. At IN-Tech Academy (M.S./H.S. 368) at 2975 Tibbett Ave., the school has invested in four computer labs, a laptop cart for most classrooms and a roving laptop cart. In middle school, students are guaranteed an average of 2.5 class periods of technology education every week.

“We have a computer available for every student when they need it,” said IN-Tech Principal Stephen Seltzer.

“They’re readily available, and if they’re not available, we can move a laptop cart to that room if a teacher’s using it for a unit or a project,” added Shirine Andraws, the assistant vice principal for technology. Add in the SmartBoard in every classroom, and Ms. Andraws calls IN-Tech “tech-savvier than most other places.”

To provide all that technology infrastructure, IN-Tech needs funding — lots of it. Computers are not cheap, and the school needs to make sure the students are working with up-to-date equipment.

“A lot of it at this point is really looking for partners,” Mr. Seltzer, said of fundraising. He explained the school looks for money wherever they can get it, from a recent grant from the borough president’s office to the Virtual Enterprise organization buying the office furniture for their new middle school program.

“I think that one of the realities of public schools today, and especially public schools in New York, is building those relationships even with private foundations,” Mr. Seltzer continued. “It’s something that we continue to work on so we continue to build the technology offerings at IN-Tech, as well as making sure that we try to stay on if not on the cutting edge, at least on the knife.”

Some of that funding comes from the DOE, but a lot of it comes from outside sources.

“If you want to help us, that would be great! Wherever we can get the help,” Mr. Seltzer joked.

Citywide, the New York City Foundation for Computer Science Education (CSNYC) will help fund and implement the mayor’s goals, which carry an estimated price tag of about $81 million. The foundation will ensure that Computer Science For All will be a public-private partnership. The city will cover about half of the $81 million in costs, while CSNYC will look to secure the rest from private sources. Several groups have already stepped forward as founding donors, including the Solomon Wilson Family Foundation, the Robin Hood Foundation and the AOL Charitable Foundation.

IN-Tech does not have a dedicated computer science program, but the school does offer a coding class for middle school students and has two technology-based tracks for high school students.

Along with funding, finding educators to teach computer science is another major hurdle. At IN-Tech, administrators put an emphasis on regular training.

“Our teachers are constantly going out on professional development, and they seek opportunities for themselves… We have two teachers going out toward the end of the month to become BrainPOP certified,” said Ms. Andraws, explaining that BrainPOP helps teachers integrate technology into science education.

Mr. Seltzer said it can be difficult to find teachers with the proper career and technical education (CTE) certificate to teach the technology-based classes, like Cisco certification and Virtual Enterprise.

“I think it’s a challenge because it’s a new area, but as more schools are taking this on, I think we’re going to find more people who are available and certified,” he said.

CSNYC acknowledges this is an issue, and promises that 5,000 teachers will be trained in grade-appropriate computer science education over the next 10 years. Some of them will be exclusively computer-science teachers, while others will receive additional training.

On the political side, northwest Bronx Assemblyman Jeffrey Dinowitz noted, “It’s not a matter of more funding, it’s a matter of spending money properly.”

He pointed to former Mayor Michael Bloomberg’s education proposals as a lesson in misguided ambitions.

“They spent massive amounts on things that never went into the classroom,” the assemblyman said.