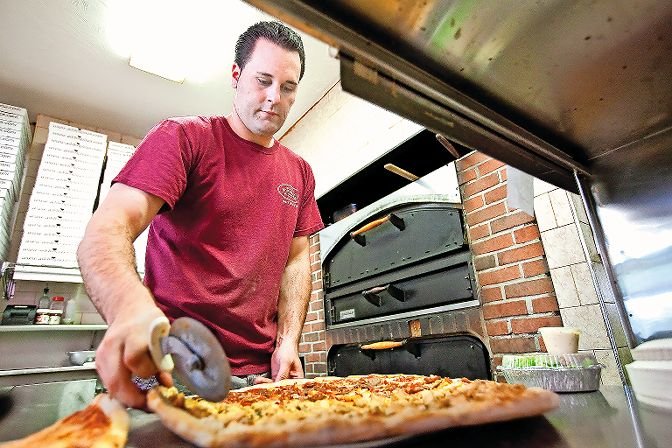 Larry Addeo, owner of Addeo’s Riverdale Pizzeria, says the new vaccine mandate will make it much more difficult for him to hire not only at his North Riverdale shop, but in his other eateries around the Bronx. Addeo already doesn’t require vaccine status checks at his Riverdale pizzeria since most of his orders are takeout and delivery anyway. But that’s not the case in some of his other establishments.
MARISOL DIAZ / File
By ETHAN STARK-MILLER

In a couple of weeks, Mayor Bill de Blasio’s eight years in City Hall will come to an end, handing the reins to Mayor-elect Eric Adams.

But even in the waning days of an administration, it’s never too late to try and leave a lasting impact. Especially for de Blasio, who’s rumored to be eyeing a run for governor next year.

That very well may be why de Blasio announced a coronavirus vaccine mandate last week for all of the city’s private sector workers. In a series of television interviews, the mayor said this new mandate is necessary as the city enters the winter months and is facing two variants — first delta, and now omicron.

The mayor already requires all public sector employees to be vaccinated, and even many private sector employees with his Key to NYC mandate that took effect this past August. That required all indoor dining, entertainment, fitness and performance establishments to have employees vaccinated.

This mandate will be the first in the nation that extends to the entire private sector, de Blasio said. By the time it goes into effect, all employees of private companies will have to get at least one dose of the vaccine, or their employers could face fines of up to $5,000. This comes at a time when the city has one of the lowest coronavirus infection rates in the state, and a vast majority of its population is fully vaccinated.

When de Blasio first announced the mandate, the city’s broader business community quickly raised concerns about how the measure would be enforced, whether the city had the power to enact it, and if it would cause worker shortages. Nick Fazio, Community Board 8’s economic development committee chair, echoed those concerns, adding the city didn’t effectively communicate the new rule before announcing it.

“I understand the motivation (behind the mandate), however I think the business community is fairly united in their disapproval of the timing of this and how it was abruptly announced,” Fazio said. “There were no discussions between the administration, the Department of Small Business Services, the New York Chamber of Commerce and the business community, or CB8’s economic development committee. We were not consulted. But that is a late motif of this administration.”

For small businesses in this corner of the Bronx, Fazio said, he doesn’t think the mandate will have much of an impact on staffing. That’s because many of them already had their employees vaccinated when de Blasio passed the Key to NYC mandate in the late summer.

“So, the businesses that I spoke with,” Fazio said, “it’s not going to be a real issue for them.”

Jennifer Sproull, the assistant manager with the Kingsbridge Business Improvement District, says she believes this new mandate is just posturing for the de Blasio administration, and she doesn’t see how it could be enforced. And the incoming Adams administration could very well do away with this mandate when it takes over next month.

Fazio is worried the new mandate could disrupt some of the systems businesses have already implemented to keep customers and employees safe during the coronavirus pandemic.

“Businesses have worked with employees and with their patrons to come up with policies and procedures that are allowing them to keep people safe and to continue to conduct business,” Fazio said. “The impulsiveness of this will certainly cause confusion in the systems that they have in place when businesses ultimately are struggling to find workers and continue to try and recover from the pandemic.”

Many small businesses are still at reduced staff, said Tracy McCabe, executive director of the Kingsbridge Riverdale Van Cortlandt Development Corp. So small, in fact, businesses are generally worried the mandate could make it harder to retain the few they have.

“They’re already having a really hard time finding help and employees,” McCabe said. “I mean, a lot of them have cut back on their hours and things because they can’t find people to work. This is just going to make it that much harder.”

The mandate already has made it more difficult for Larry Addeo, owner of Addeo’s Riverdale Pizzeria in North Riverdale, who’s been looking to hire new employees for his other restaurant in Morris Park.

“It’s another question now on the interview,” Addeo said. “When I was hiring over here, there’s a few people I’ve had to turn down. When I do interviews, that’s been the first question that I ask: ‘Are you vaccinated?’ And if they say ‘no,’ I don’t need to continue.”

Although Fazio made it clear he thinks people should be getting vaccinated, he adds many business owners believe they shouldn’t be responsible for enforcing the mandates. And Addeo is certainly in that camp.

“The government wants everyone vaccinated, but they’re putting the burden on us, which is not fair,” Addeo said. “Because what we’ve gone through the past year-and-a-half with all the restrictions and then these new mandates and everything. It’s already been a big enough burden.”

Addeo hasn’t reopened indoor dining at his Riverdale pizzeria because it would be too much of a burden to police the vaccine status of both his employees and customers in a business that mostly relies on takeout anyway. He doesn’t have the same flexibility with his Morris Park location, which is a sit-down restaurant.

In addition to private sector employees, the mandate also will require those between 5 and 11 to show they’ve received at least one vaccine dose before visiting indoor dining, entertainment, fitness and performance venues.

Fazio hopes enough people will get vaccinated before the Adams administration takes over next month, which could make such a mandate no longer necessary.

“Most companies above 100 employees in New York City already are requiring vaccinations and regular testing and mask wearing. And I hope that it doesn’t have an adverse impact on the bodegas and the small businesses that so far haven’t really had to control their vaccinations.”