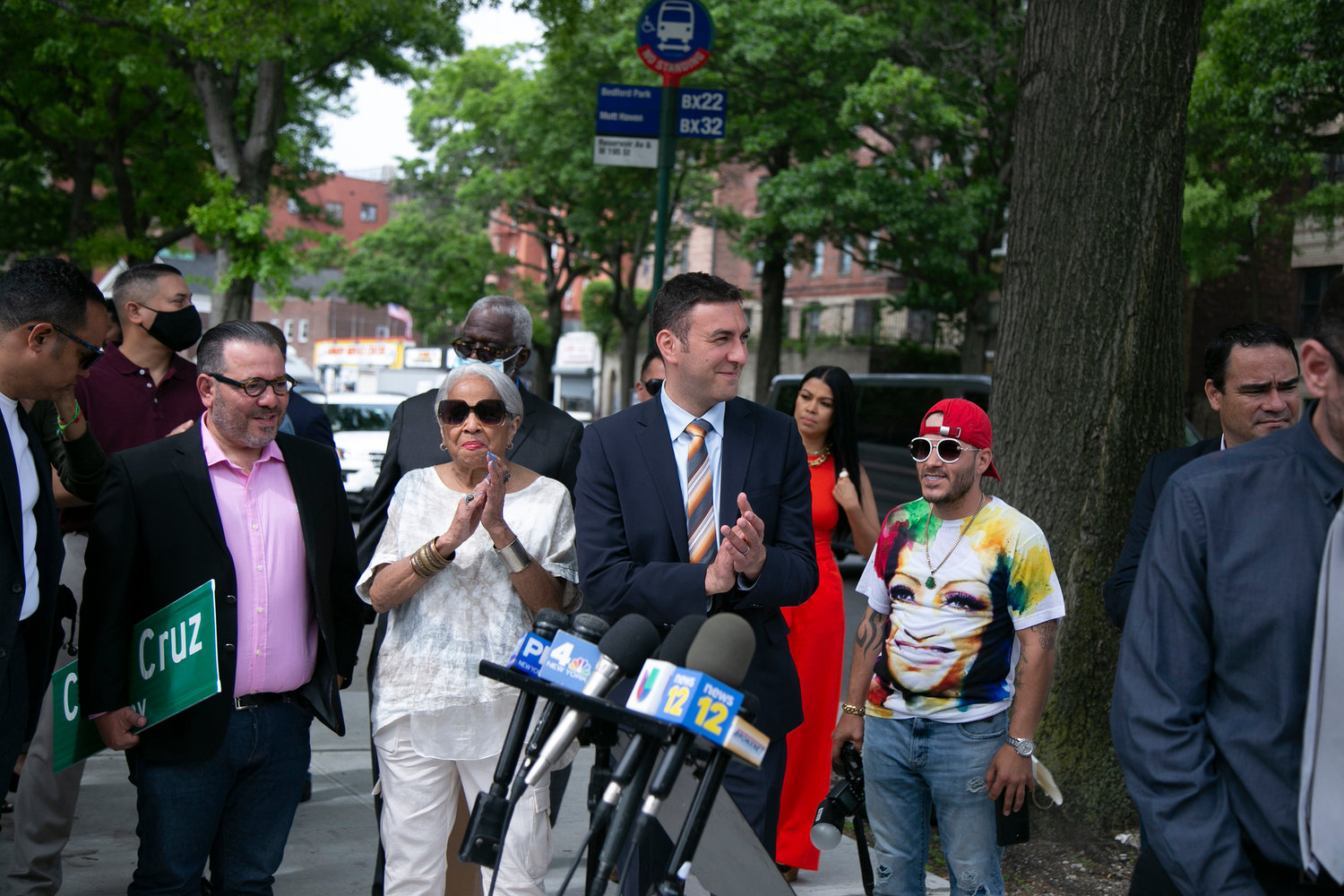 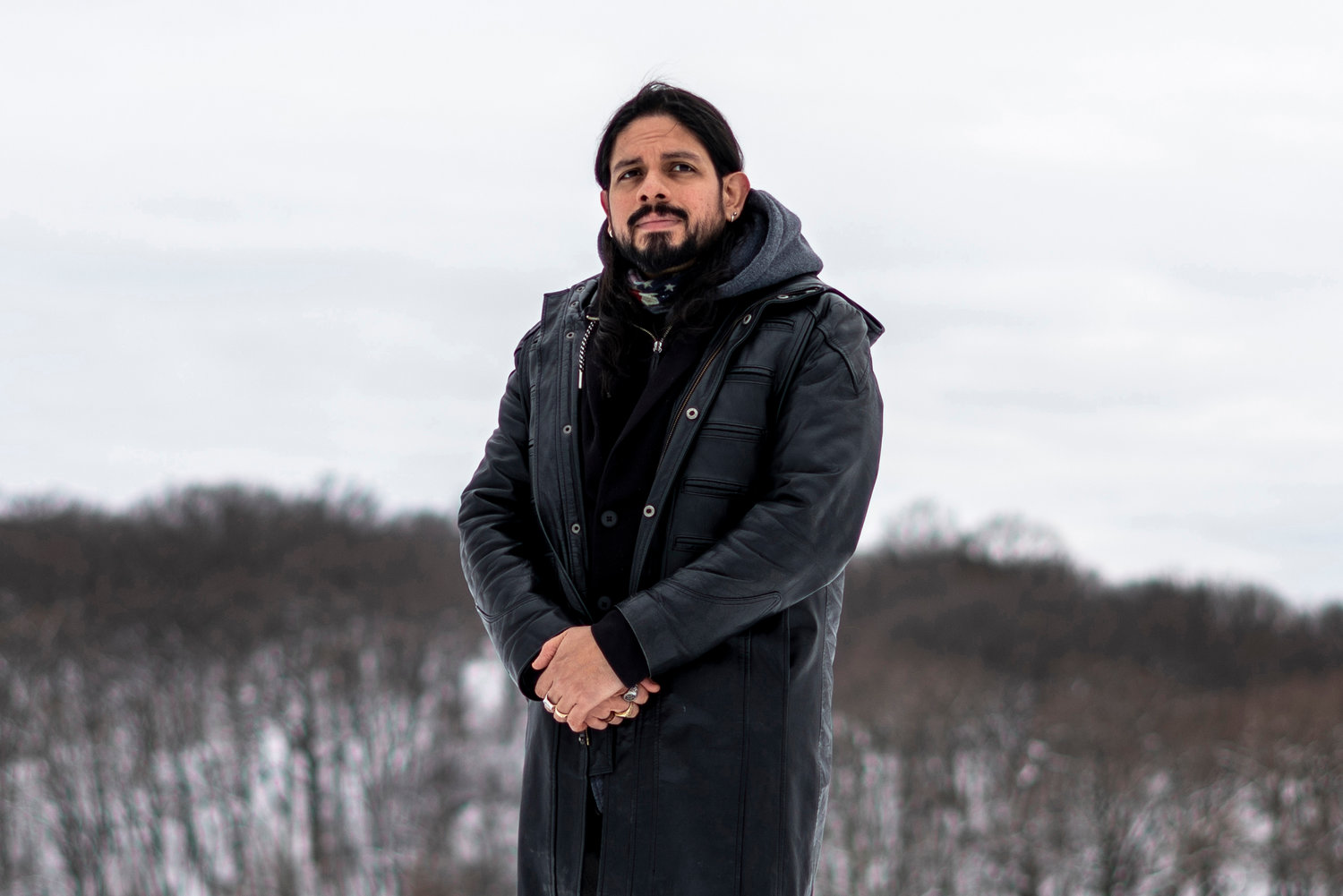 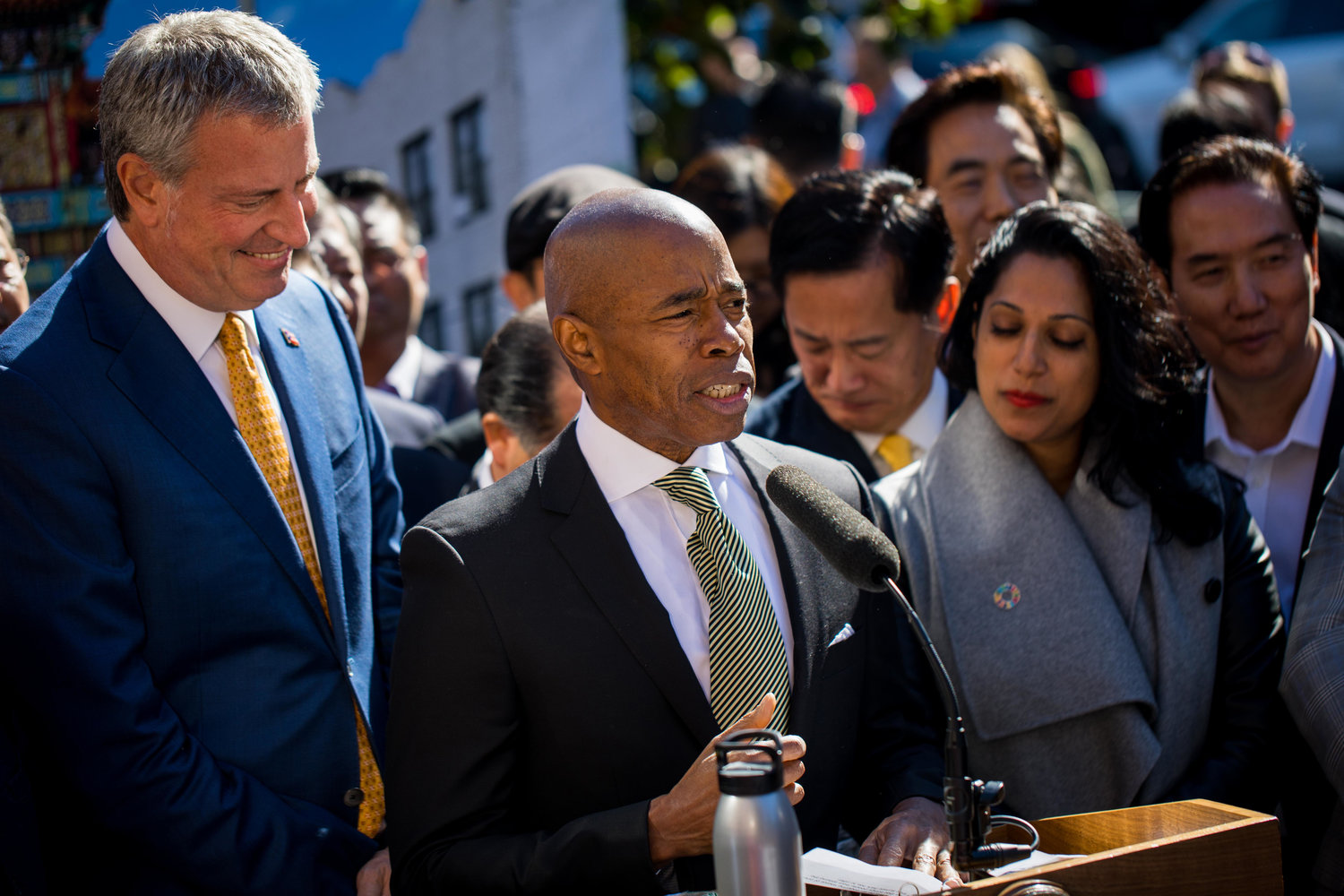 Brooklyn borough president Eric Adams will likely be elected the city’s next mayor in a few days, taking over for term-limited Bill de Blasio. As a former cop, Adams ran on a public safety platform. But he also talks about police accountability, especially amid a surge in violent crime across the city over the last couple years.
Mayoral Photo Office/ Benjamin K 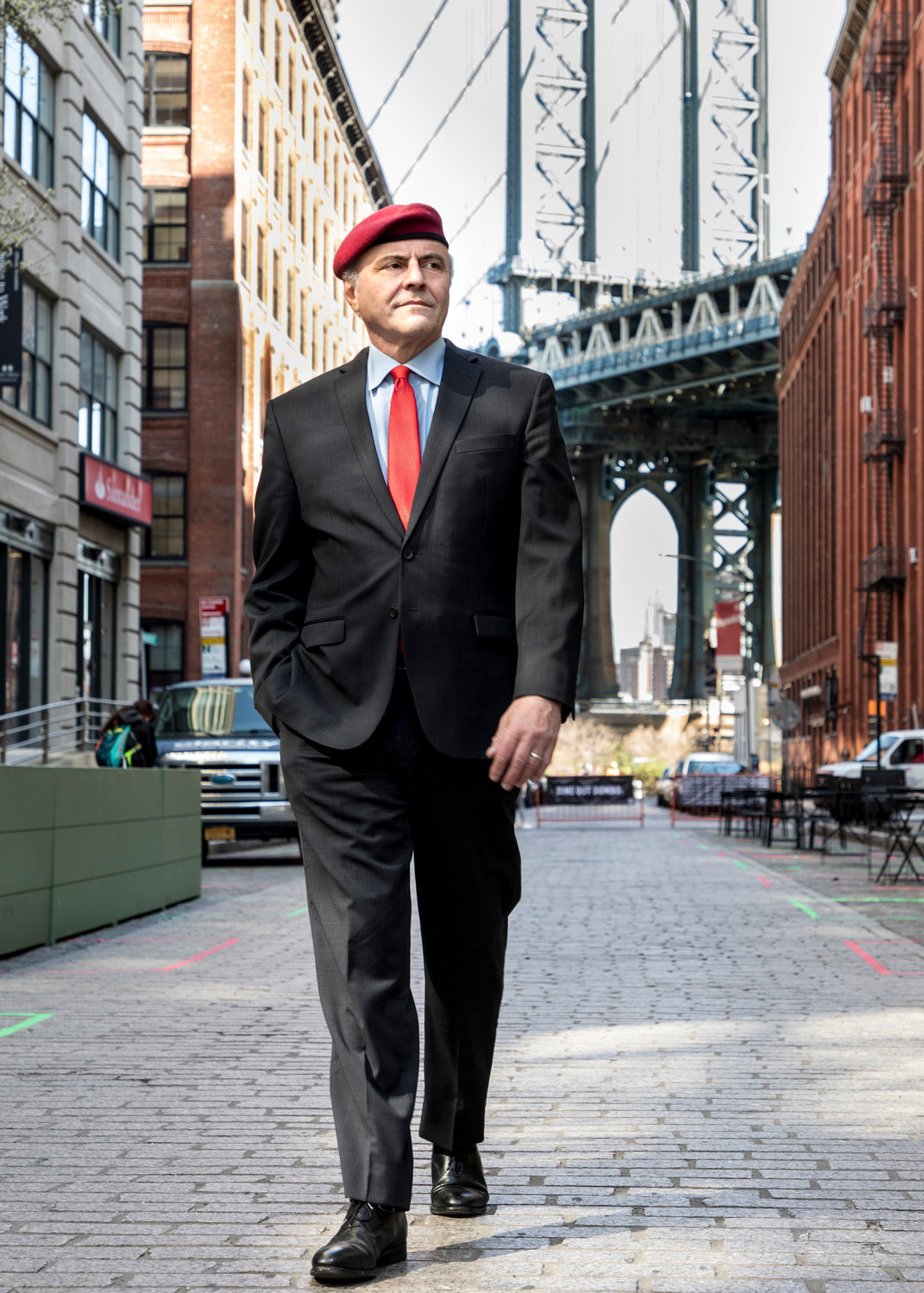 Guardian Angels founder Curtis Sliwa is the one thing standing between Eric Adams and Gracie Mansion. Sliwa says Adams hasn’t gone far enough in his tough-on-crime message because he hasn’t committed to hiring more police officers or bringing back the controversial stop-and-frisk policy.
Courtesy of the Curtis Sliwa For
Previous Next
By ETHAN STARK-MILLER

It’s only been a half-year since Eric Dinowitz won his city council seat in a special election to replace now-Bronx Supreme Court judge Andrew Cohen. And only about four months since the Democratic primary where Dinowitz all but assured he’d hold onto his seat for the next two years.

But the councilman must still overcome one last hurdle — albeit a very small one — to solidify his job security: the Nov. 2 general election. There, he’ll square off against Republican independent filmmaker Kevin Pazmino in a contest Dinowitz is almost assured a win because of his district’s solidly blue makeup.

In fact, Dinowitz tells The Riverdale Press he’s not putting nearly as much energy into campaigning as he did in two straight elections earlier this year. Instead, Dinowitz is more focused on simply being this area’s councilman.

“In the short six months that I’ve been in office, I’ve been able to get an incredible amount done for the community,” he said. “And a lot of the things I spoke about in the campaign, I’ve already started to address.”

Those accomplishments include convincing the city’s sanitation department to return curbside composting for the western part of his district. And he is credited with playing a role in helping keep a community garden in operation at DeWitt Clinton High School.

“When I have parents concerned about (school) reopening, those are the concerns that I bring directly to the Department of Education, directly to the chancellor of the schools, at committee meetings,” Dinowitz said. “When people say that they want composting back, we do the work, and we get composting back. When people say that their pleas for preserving the school garden are falling on deaf ears, we bring people together and make sure that those concerns are met.”

Pazmino, however, still thinks he could bring a much-needed different perspective to City Hall. The conservative candidate is running on the notion that Democratic leadership in New York City and state has become increasingly inadequate over the past couple years.

And while the number of Democrats in this particular council district easily dwarfs Republicans, Pazmino believes there are potentially a large number of voters no matter what their political affiliation who agree with him on issues, including his opposition to Mayor Bill de Blasio’s recent vaccine mandate for municipal employees.

“I think there is quite a bit of discontent in terms of the populace,” Pazmino said. “In terms of people not being very comfortable with being coerced to have to take the vaccine. And people losing their jobs. And people being forced to choose whether to provide for their families and put food on the table, (or) take a shot.”

But no city employees have lost their jobs for refusing to take the vaccine so far. Instead, public school and city health care employees refusing the vaccine have been placed on unpaid leave until they get the shot.

Like in the special election, Pazmino said he’s pretty much campaigning by himself. Mostly because he’s against the influence of money in politics, and hasn’t tried fundraising at all. Instead, Pazmino gets support from like-minded candidates that include Sammy Ravelo and Bill Pepitone — both running on the Conservative Party line for Bronx borough president and mayor, respectively.

The biggest difference Pazmino has noticed between the special and general elections is the lack of chatter and opportunities to present his case to voters.

“In the special, there was a lot more forums, there were a lot more debates going on that we were invited to go to,” Pazmino said. “Pretty much everything after the primaries died out. There hasn’t been much coverage at all or much debates scheduled or whatever.”

In contrast, the mayoral election has had two televised debates between Brooklyn borough president Eric Adams and the Republican founder of the volunteer crime patrol group the Guardian Angels, Curtis Sliwa. Still, Adams is the clear frontrunner and will almost certainly be the city’s next mayor.

In their first debate last week, Sliwa attacked Adams — a former New York Police Department captain — for not promising to hire more officers and bring back the controversial stop-and-frisk policy from the Rudy Giuliani era. Sliwa also railed against the city’s vaccine mandate for municipal employees, which Adams said he fully supports.

There are also races for public advocate, city comptroller and all the other 50 city council seats. Jumaane Williams will likely hold onto his position as public advocate, while Brooklyn councilman Brad Lander is poised to succeed the embattled Scott Stringer as comptroller.

While it’s pretty much a foregone conclusion the Democratic candidates will win most elections across the city next week, Manhattan College political science professor Margaret Groarke says it’s still important people vote. And for a couple of reasons.

One is the five ballot proposals to amend different parts of the state constitution voters will find on the flip side of their ballots.

The other is for people to ensure their neighborhoods are represented in the final vote tally.

“We know that elected officials pay attention to where their vote comes from, and what neighborhoods vote and don’t vote,” Groarke said. “And so, I always encourage my neighbors to go out and vote irrespective of who they’re going to vote for. I think it’s important that people know that you can’t forget our neighborhood when you’re in office.”

For his part, Dinowitz says he won’t be forgetting any of his constituents. And he looks forward to working with the next mayor.

“I’ve become known as someone who is able to work with anyone to fight for what I believe in and to fight for my district,” Dinowitz said. “But do it in a way that brings people together and actually gets the job done. So, I see myself working very well with the Adams administration.”