Veterans get a little help from some of their friends 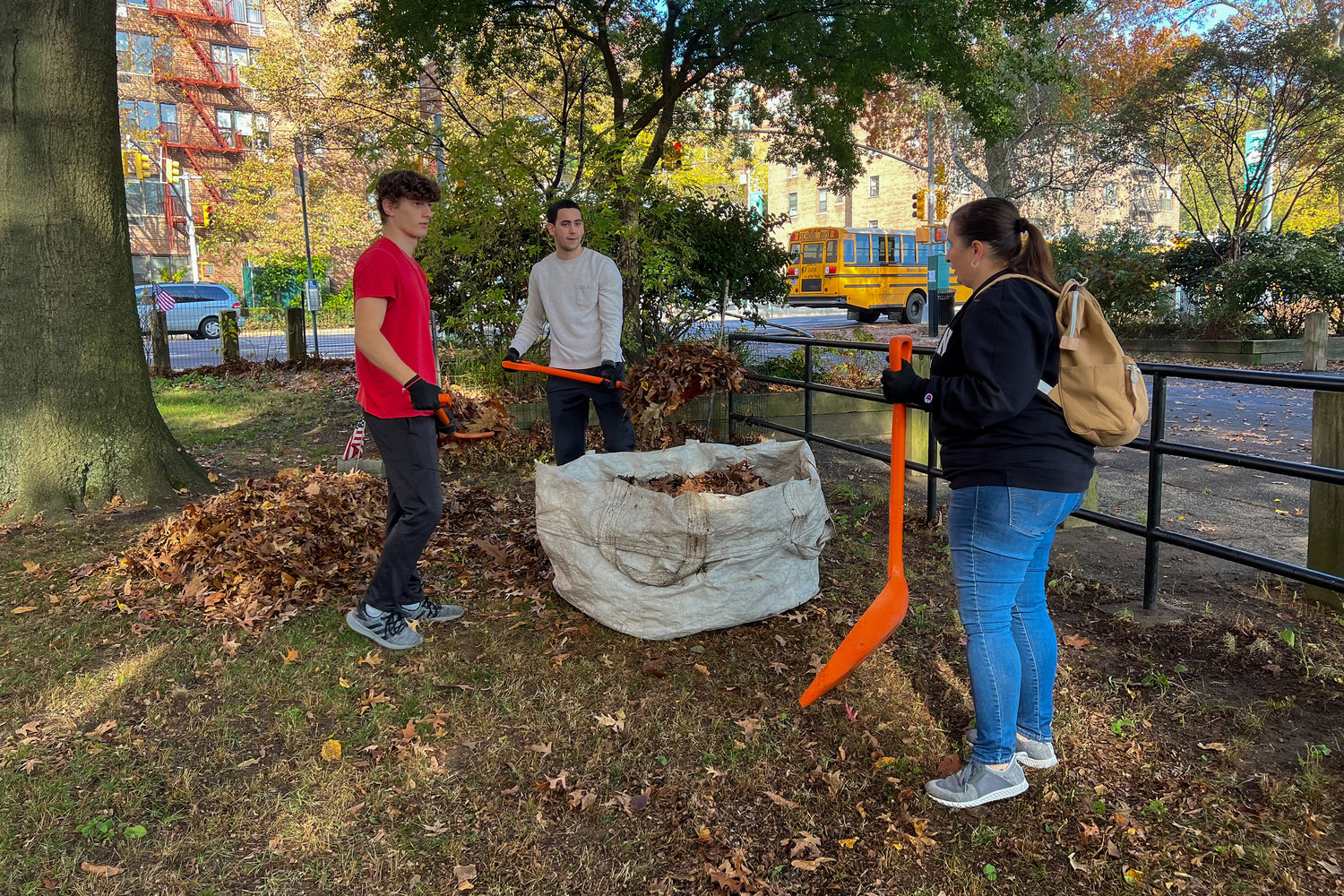 The base of each oak tree is a bronze plaque — 39 in total display such notable names as Franklin Delano Roosevelt.

However, since he was not a resident of the Bronx, he was memorialized as the commander-in-chief, president, statesman and humanitarian.

The sons of the American Gold Star Mothers continues as an organization of mothers who lost a son or daughter who fell in service of serving our country.

“We found Memorial Grove in 2020, so it seemed natural — like let’s go help out,” said Tiana Sloan, director of the college veteran center and success programs.

The organization always tries to stay busy. Whether on campus or on the streets of their community, the group donates food and/or clothing.

One of their annual efforts is cleaning Memorial Grove in Van Cortlandt Park at West 242th Street. The area, which many might not notice, is a living tribute to fallen Bronx service members who served in various wars.

The institution and the Van Cortlandt Park Alliance joined forces to rake the many leaves that fall from roughly 40 oak trees. Christina Taylor, deputy director, considers the college one of their best partners.

Some members of the alliance joined the Jaspers’ track team that gets along with the veterans on campus.

Within the first half hour, the team collected at least a dozen bags in a specific area of the memorial site.

The Riverdale Press reported that Herb Barret, a U.S. Marine Corps veteran, noticed a while ago Memorial Grove had not been taken care of.

Don Tannen, another veteran, and Barret began a mission to restore the neglected memorial.

In 2012, Assemblyman Jeffrey Dinowitz convinced the parks department to restore the site and install a wire fence around the grove to stabilize soil erosion and reverence.

By the time it was completed, there were 39 plaques in front of 39 oak trees.

However, Chris Norberto, a Bronx native who used to come to the park during his childhood, was not aware that the grove or its history existed until his volunteer work at Manhattan College.

“Learning about the memorial, I was just like, that’s super cool. I didn’t know that was in the neighborhood,” he said.

The clean-up lasted for three hours. Students came and went, but the turnout was what Norberto, president of the Student Veteran Organization, expected.

Students came to the park throughout the day.

Sloan encouraged students to come for one hour, rake a bag and go back to class. The walk to campus is no more than 10 minutes.

To some, raking leaves after multiple hours can stress the lower back and lead to sharp pain. But Norberto, who served in the U.S. Navy for 11 years, claims he’s been through worse.

“I got in trouble once, and I was in the Middle East, and I had to shovel sand over sand, so this is nothing,” he said.

Not only was it easy for him, but he noticed a difference in workload because trash in the park was non-existent. In 2020, Norberto and other volunteers picked up trash and empty beer cans left near the park’s gates and benches.

During the pandemic, national parks were getting trashed.

One reason was the parks became so overcrowded with people as they would seek an escape from quarantine or need a stress reliever after losing a job.

The parks staff had problems keeping up with the trash. And Van Cortlandt Park’s understaffing issue didn’t make their job easier.

Stephanie Ehrlich, executive director for the Van Cortlandt Park Alliance, says it is best to say that parks in New York City are generally understaffed.

“For instance, today (Thursday), we have eight maintenance staff for the whole park, which is 1,146 acres,” she said. “The park is open from early in the morning until it gets dark.”

Yet, the alliance helps the staff by coordinating volunteering efforts. They have more than 2,000 volunteers a year.

Tayler told The Press  volunteers need to be supervised by staff members, but it is hard to have 5,000 volunteers while the park is understaffed.

“More leaves are going to fall, so later today it might look so same, but we help out where we can,” Sloan said. “Even encouraging people in the community to reach out to the target line and see how they can make the park look beautiful.”