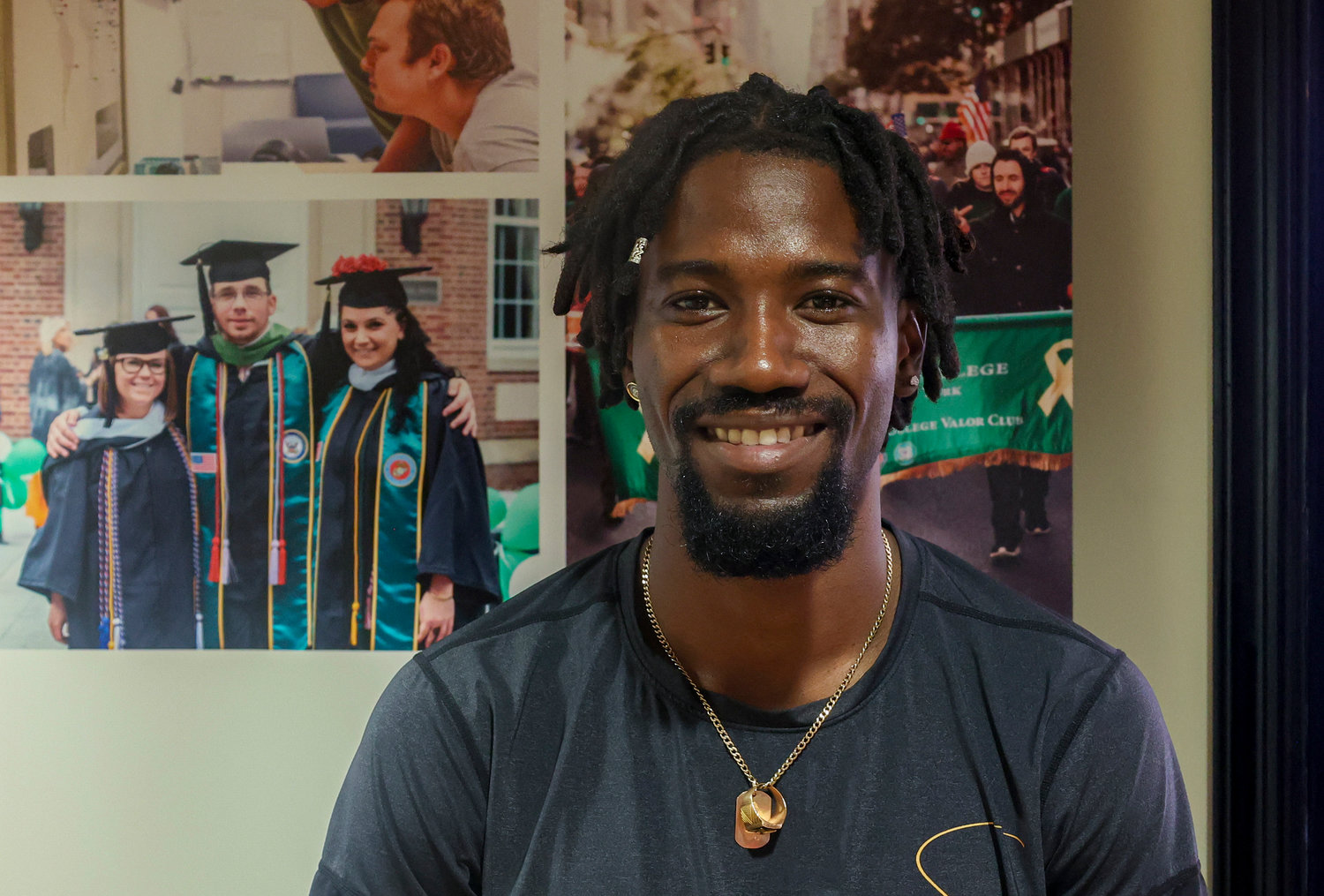 Veteran Student Brian Saul was officially discharged Dec. 30 of last year. He attended Manhattan College last fall but transferred 60 credits making this his senior year as an undergraduate. He is studying business administration and plans to get an MBA at MC.
Gary Jean-Juste 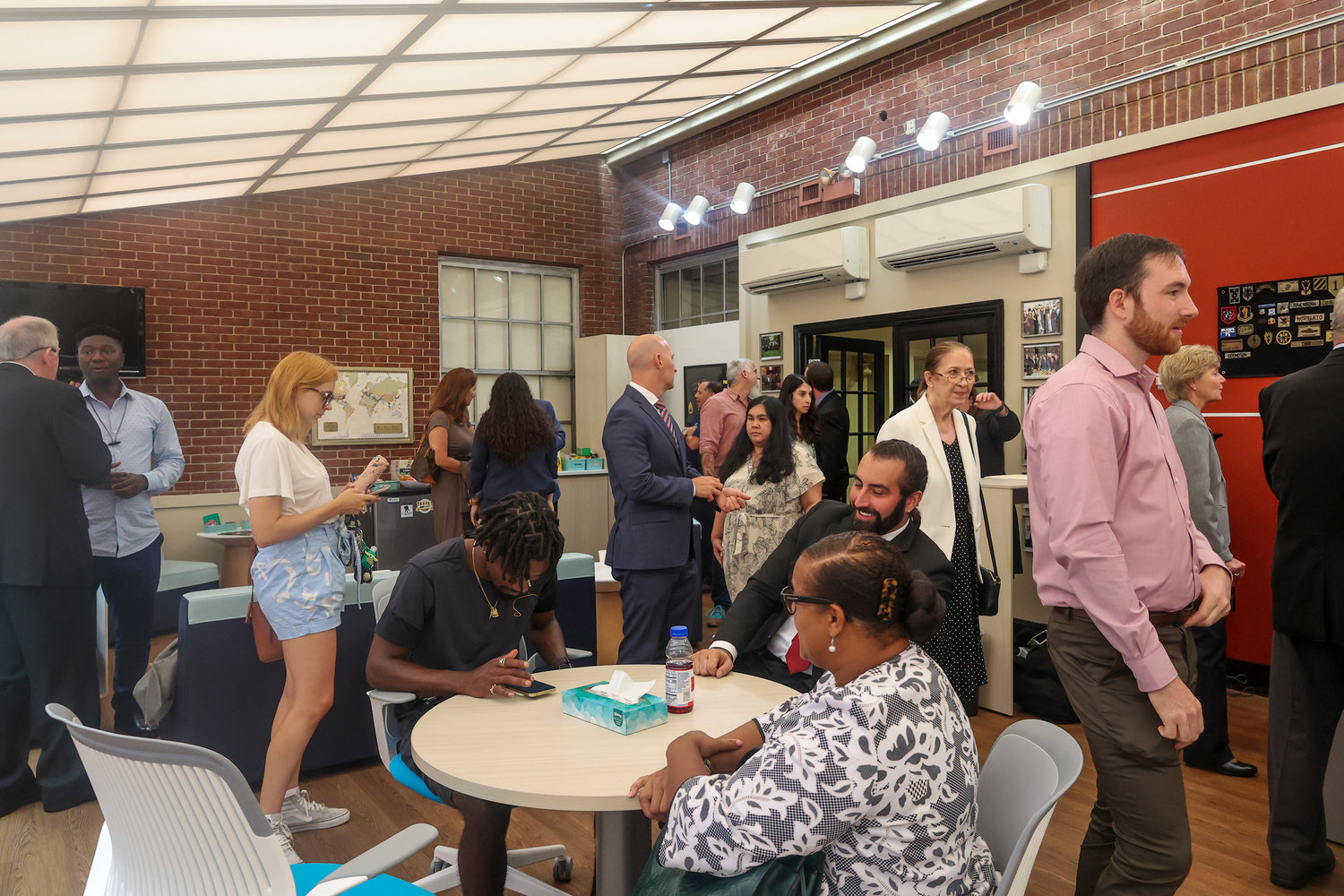 The renovated Veteran Success Center officially opened Sept. 15 as the college hosted a ribbon cutting ceremony at Manhattan College. The center is more than a group of students socializing but can be used to allow students to study and seek comfort with their struggles academically and personally.
Gary Jean-Juste
Previous Next
How to connect

Are you a veteran and are not sure where to find opportunities?

Visit Veterans.ny.gov or nyc.gov/vets if you are a veteran. There are multiple opportunities veterans can take advantage of.

Returning home from military service can be challenging for service members, especially those returning to school.

Chris Norberto, a 32-year-old Bronx native who is the president of the Student Veteran Organization, enlisted in the U.S. Navy for 11 years. During his service time, he worked as a security officer overseas in: Bahrain, El Salvador and Coronado, Panama.

“I thought I was going out as a warrior with my name attached with something, Norberto said. “But knowing what I know now, it’s not about just having your name on something.”

After his discharge in 2019, finding work was almost impossible for him. He applied for security jobs. Since he enlisted in law enforcement and anti-terrorism security, he thought that was his best bet.

“The hiring manager told me that they thought I didn’t have enough experience doing security,” he said. “And I was just kind of dumbfounded by that. I just spent nine years in the Middle East twice. I was in El Salvador for a year and a half and did security on the East and the West Coast of this country. What more experience do I need, dude?”

When a soldier is discharged and becomes a veteran, it comes with a title of respect for most. However, veterans have struggled to find work.

With the support of friends and family, they encouraged Norberto to start over by attending school, and with his degree, he will be able to do anything.

U.S. Department of Veteran Affairs say only 15 percent of student veterans are the traditional age of a college student. Most veterans are between the ages of 20 and 40.

In response, he enrolled his hometown school Manhattan College, studying sociology with a concentration in criminology and a minor in philosophy. He plans to continue to receive his master’s at the institution sometime after he graduates this summer.

After the GI Bill was passed into law in 1944, veterans across the country could receive relief benefits to claim tuition assistance for undergraduate and graduate students.

According to the VA, veterans are enrolled in higher education to increase their career possibilities, acquire new skills, apply military skills in civilian life and improve their own quality of life.

At the same time, there was a dire need to adequately accommodate the veteran community in Manhattan College.

On Sept. 13, the school hosted a ribbon-cutting ceremony to celebrate the opening of its expanded Student Veteran Success Center.

The original center opened in October 2017. Prior to being a veteran center, it was a faculty dining hall.

That dining hall is closed before the pandemic and has yet to reopen in the Kelly Commons building on campus.

The $100,000 project is not only a hang-out space for students. Now veterans have an ample designated area of their own to study peacefully until midnight.

It was almost impossible to study while students were shoulder to shoulder. But now, they can kick their feet up on a chair while completing their homework or studying for an exam, students said.

“I love it, I still can’t stop smiling,” Norberto said.

Tiana Sloan, director of Veteran Success Programs at the college, said the small lounge was a good start.

However, the students outgrew it fast. However, it was put on hold, which slowed down during the pandemic.

Some of the programs and veteran success aim to support veterans and give them a smooth transition from a discharged military member to a student.

“It was OK, I mean, the space was so small, there wouldn’t be enough seats, and some of us would need to sit on the floor,” said Brian Saul, veteran and student at Manhattan College studying business management.

After Saul’s official discharge on Dec 30, 2021, he began his transition.

“It was a lot of emotion, proud, sad, and scared at the same time,” Saul said. “But it was a start of a new journey — it was the best decision I made to come here,” Manhattan College.

He plans to continue his studies in the institution to achieve his master of business administration degree.

Saul’s time in the Army helped him in Manhattan College as his position was mainly office work. He helped with a lot of paperwork and set up finances, he told The Riverdale Press.

Two years ago, he created his own athletic wear clothing, for himself, with the word Saultitude written across the chest.

“When I wear Saultitude, it reminds me that I am strong and I can overcome any challenge or obstacles that come my way,” Saul said online. “This is the feeling I want you all to have.”

A year later, he went global. selling thousands of leggings, sweaters, and tracksuits.

However, by attending the newly renovated center, he believes this space is helpful for veterans because everyone needs space, he said.

The lounge could accommodate only 15 people, while sometimes 25 would want to come.

“The bar was the only place we can go,” Saul said.

Instead of being in a small room, student veterans had open-table conversations every Thursday at An Beal — a local Irish pub. The veteran community would go grab a few drinks and socialize.

The college has always been a supportive home for the veteran community, dating back over 150 years. It was a priority to be named as a friendly military campus.

According to vignettes collected by Christians in the Civil War, Brother Patrick Murphy, the first president of Manhattan College, was drafted into the war. But, he didn’t have to go.

Murphy met with President Abraham Lincoln to state the reasons for his exception. The president relieved Murphy from the draft. More than a month later, the war ended.

Student veterans enrolled after serving in the Civil War are history in the center. Sloan said the college was ranked number 10 this year by Military Friendly Schools, a company that identifies institutions committed to serving the veteran community.

In return, Gardner returned the favor by giving her Manhattan College Jaspers sweater.

The Veteran Organization on Campus holds various events at the quad. The upcoming one is on Sept 22 to raise awareness for veteran suicide prevention.