Vincent’s Table aims to increase food security throughout the area 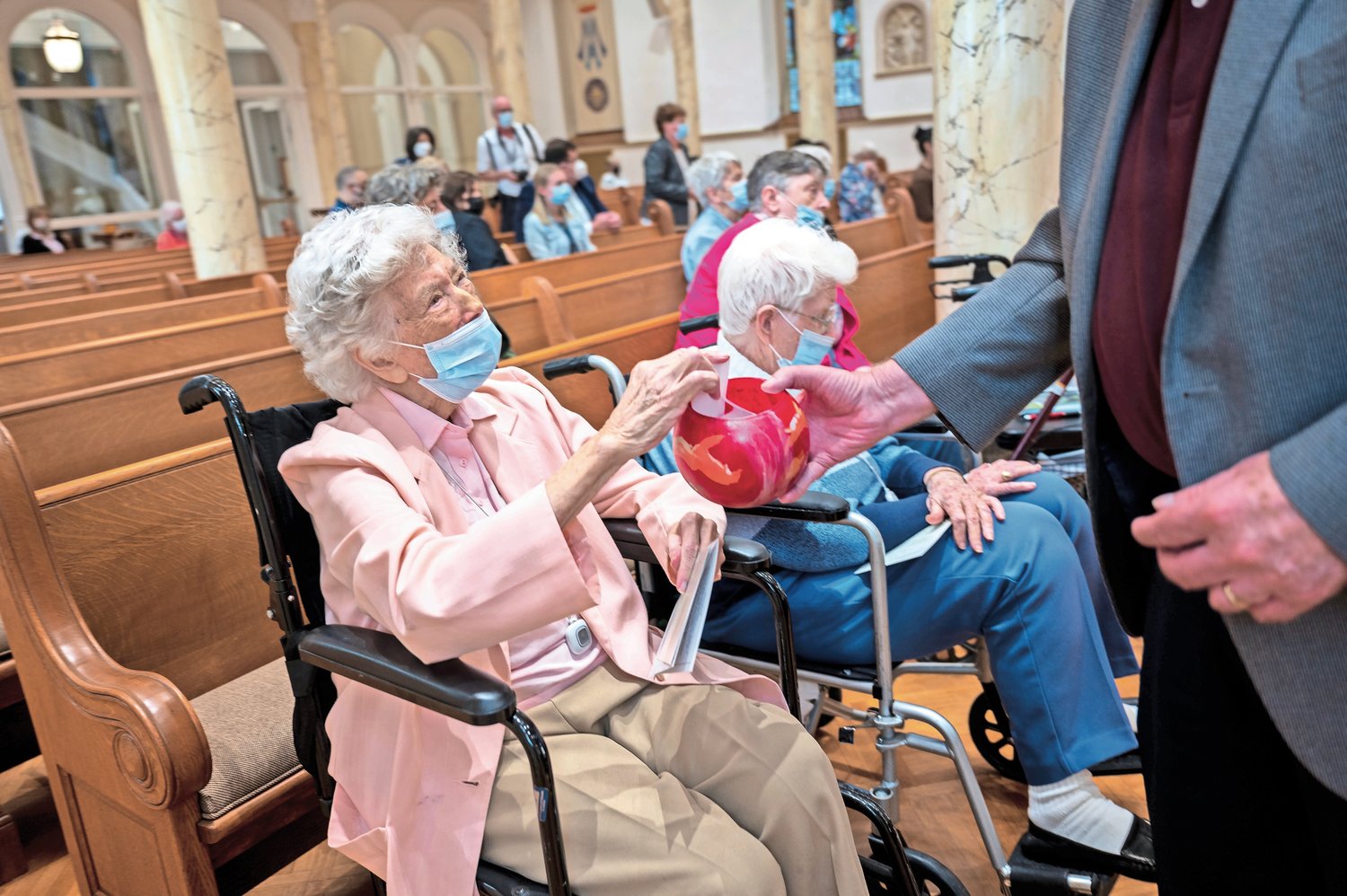 Parishioners returning their pledges for the Laudato Si’ Action Platform, which for Vincent’s Table is to help feed struggling families in the area as the community deals with food insecurity.
HIRAM ALEJANDRO DURÃN
By JOSEPH DE LA CRUZ

The last few years have been hard on families across the city. It’s more than likely that many New Yorkers have fallen on hard times and are still affected by the pandemic, inflation, and now economic challenges the rest of the world is facing as a result of the Ukrainian-Russian War.

But even before 2020, rising costs have made it difficult for families to balance school, housing, bills, and more importantly – getting food on the table.

It’s one of the reasons Sister Mary Lou McGrath of the Sisters Charity of New York, feels more compelled than ever to get out and help those in need.

“We know that times are so hard for families these days,” McGrath said. “It’s just one of the reasons why we’re making an effort to get out there and help feed as many people as we can in the area.”

McGrath’s organization has partnered with volunteers at the college of Mount Saint Vincent – a school it founded as an academy in 1859 in North Riverdale – but then later transformed as a college for women in 1898 to launch Vincent’s Table – a new outreach program for two local communities.

The venture between the two entities was created largely in part to help address the food insecurity for individuals and families around the school’s campus in the northwest Bronx and southern Yonkers.

For McGrath, participating in any charitable effort at 80 years old still brings her joy. She’s been with the Sisters of Charity for approximately 64 years.

But it isn’t just the act of being charitable but also setting milestones in the number of people the organization gets to help.

“This is so extraordinary what we did (at) Vincent’s Table,” McGrath said. “Last month we gave out 5,000 pounds of food up at 35 Vark St. We’re feeding Westchester.”

The reality of food disparity came to McGrath one day after she and a colleague ran around delivering food to different drop-off sites.

“We went back to Vincent’s table and we got about eight or nine bags together,” McGrath said. “We took them to this pantry – it’s a cupboard for dry goods and a refrigerator right by the Riverdale Neighborhood House on Mosholu Avenue. I filled all these bags with eggs, rice, a dozen of huge jars of peanut butter and jelly, cereals, soups and cans of other foods. In just twenty minutes when I circle back to the site–it was completely empty. Everything was gone. I just got the chills.”

Food insecurity has been one of the broader topics going into this year’s election cycle with prices rising due to inflation. For residents in the Bronx food insecurity had been a problem long before inflation and the pandemic.

More than a million New Yorkers are experiencing food disparity, according to Food Bank NYC – a non-profit organization that advocates against food insecurity in the city. That’s roughly 11 percent of the city’s population but half of the state’s population that needs food accessibility, the organization stated in a report released last year.

Income inadequacy is one of the driving factors that have contributed to food insecurity. The Bronx, geographically, has one of the highest rates of income inadequacy. According to the Food Bank NYC report, 52 percent of households in the borough have incomes below the self-sufficiency standard, which was $85,507 in 2021.

The partnership between the school and congregation allows for better organizing and execution of strategy because of what both groups bring to the table.

Many of the sisters in the organization are senior citizens who are battling ailments that might slow them down, according to McGrath.

“Our median age of the sisters in our congregation is in the late 70s,” McGrath said. “The youngest sister in our community is 68. We get a lot of actual feet on the tar at feeding families in the area because the young people help us do it.”

The collaboration between the two groups also allows the sisters to teach the college volunteers about providing service to the community.

“Service is a very big thing at the College of Mount Saint Vincent,” McGrath said. “It’s almost the first word the kids hear when they step on the campus.”

For college volunteers like Jordan Douglas, providing service to the community is an opportunity to reach out get to know the people he’s helping.

“I think, since we’ve been doing this for the past few months, there’s a sense of community,” said Douglas, Vincent’s Table coordinator. “We see familiar faces, and families, so it’s more or less just happiness and joy.”

Douglas doesn’t just see Vincent’s Table as just a collaboration between two generational groups, but rather a necessity for communities to build hope and help revitalize families.

“I think in this time it’s definitely needed more than ever,” Douglas said. “The pandemic definitely disrupted the economy as a whole, as well as a lot of family stability.”

Douglas and McGrath want families to know they will be received with love and care from Vincent’s Table. Together, the duo along with the entire volunteer organization want the community to know they are dedicated to playing a major role in helping to stabilize food security and remain committed to the service of charity.

“We are welcoming everyone, no matter who they are,” Douglas said. “We’re here for you, and we welcome you with open arms.”