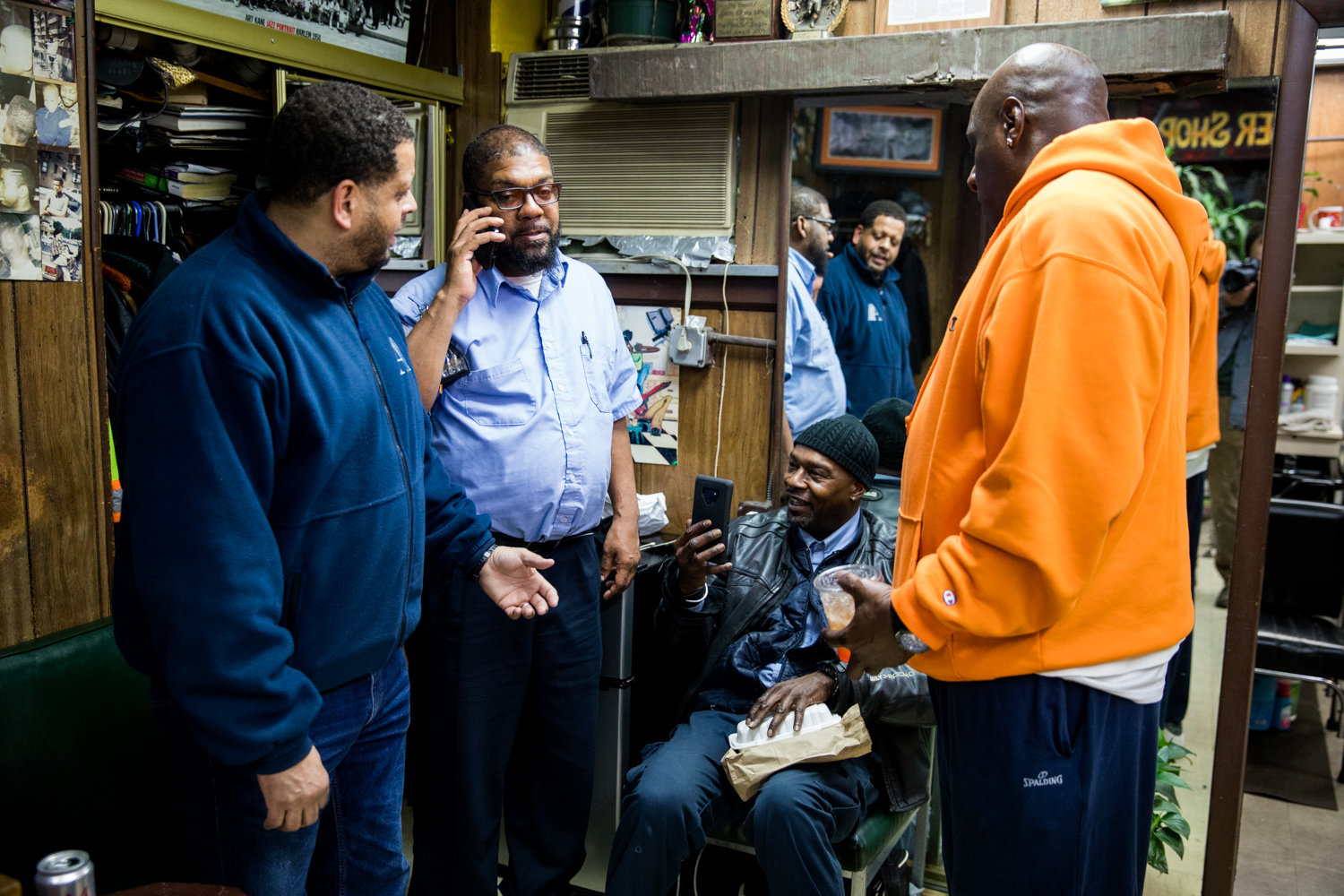 Walter Watson, second from left, talks on the phone inside Marble Hill’s International Unisex Salon on March 6, where he was a longtime customer. The MTA bus driver would die from complications related to COVID-19 less than two months later at 55.
JULIUS CONSTANTINE MOTAL / File 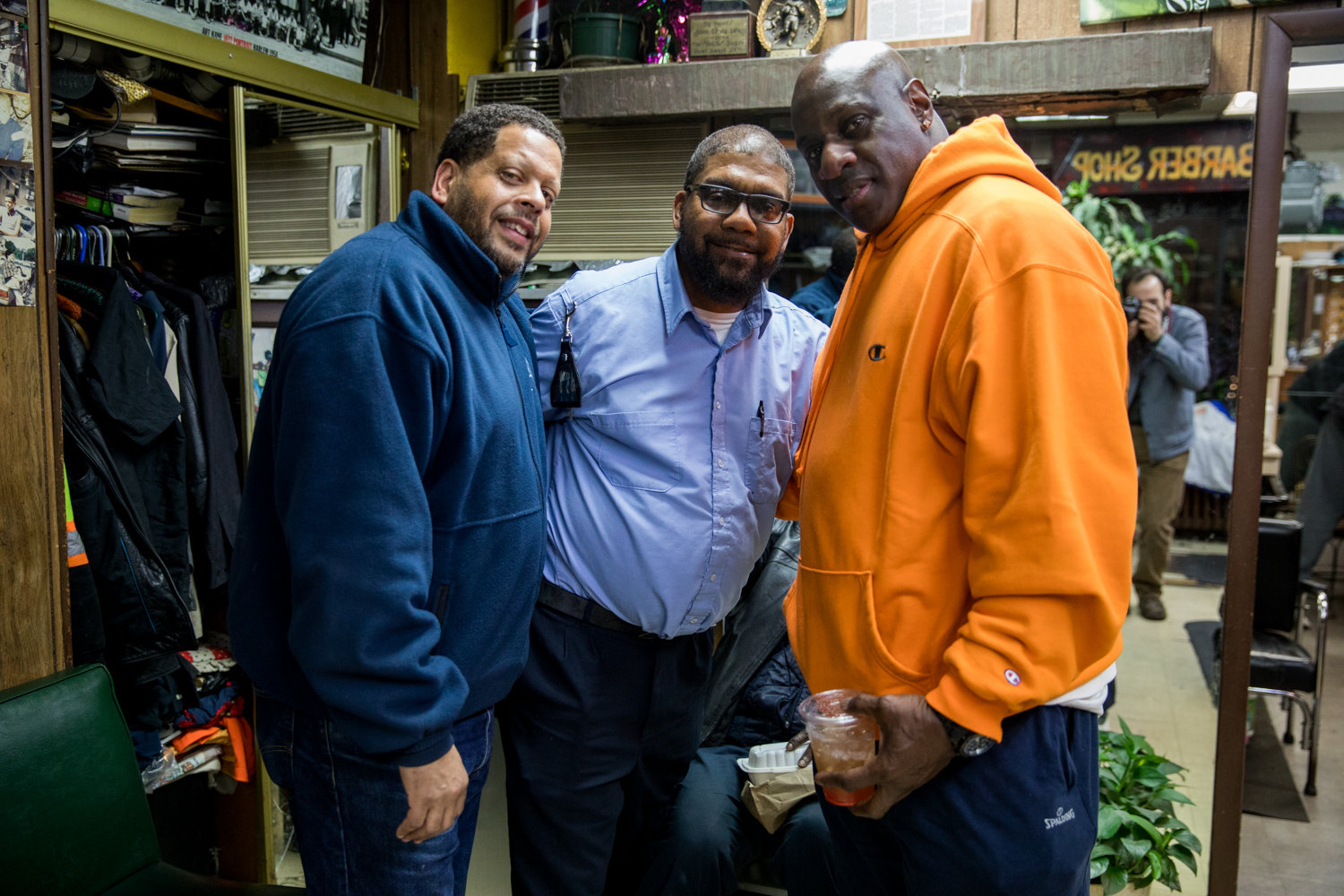 Walter Watson, center, smiles with Scott Dread and Cornell Colton inside Marble Hill’s International Unisex Salon on March 6. Watson died of complications related to COVID-19 on May 4. He was 55.
JULIUS CONSTANTINE MOTAL / File 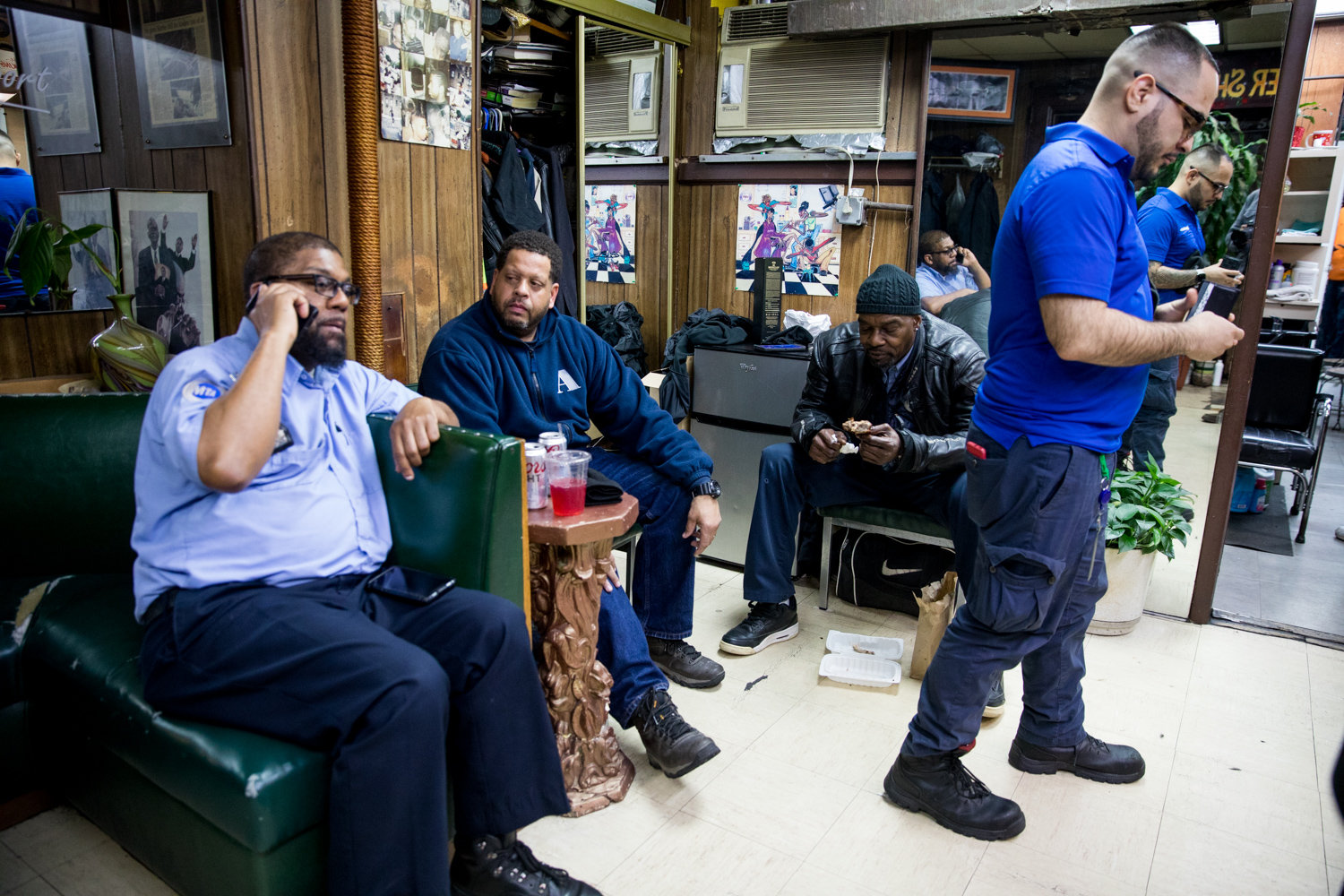 Walter Watson, left, was a longtime customer of Marble Hill’s International Unisex Salon. An MTA bus driver for 20 years, Watson died of complications from COVID-19 on May 4. He was 55.
JULIUS CONSTANTINE MOTAL / File
Previous Next
By ANTHONY CAPOTE

When Walter Watson came down with a cough in early May, neither he nor his family believed it was serious. Yes, there was a deadly virus ravaging New York City — and Watson was a front-line worker as a city bus driver — but this was just a little coughing. Plus, they were more concerned with Walter’s sister, Millicent, who was sick with COVID-19 at the time.

In fact, Millicent remembers her brother calling in to check on her the morning of May 4. Walter was a 20-year veteran of the Metropolitan Transportation Authority, most recently working out of the Jackie Gleason Bus Depot in Brooklyn’s Sunset Park.

Walter drove the bus that Monday, getting “essential” workers where they needed to be, still coughing and not worrying too much about it. That is until the Marble Hill native made it home and decided he needed a nap.

“You know how men are,” Walter’s sister, Melissa, said. “‘That little cough — that little thing,’ like it’s nothing. He came home from work that day and never woke up.”

That cough wasn’t little at all. Doctors later confirmed Walter died of complications from COVID-19, one of more than 100,000 now claimed by the virus that, just a few months ago, few had even heard about.

Walter spent almost his entire life in Marble Hill. A 55-year-old U.S. Navy veteran, he grew up with three sisters in the Marble Hill Houses on West 230th Street.

He was the second oldest which, according to his sister Melissa, made him a fiercely protective — and generous — brother.

“My father used to give us $250 each,” she said. “Our brother used to take his $250 and make sure that he bought all of his sisters a Christmas present.”

Walter’s parents split when he was 8, sending him eastward in the Bronx. Yet, he maintained his friendships in Marble Hill, even attending John F. Kennedy High School.

“Marble Hill was a totally different place then,” Melissa said. “You could go in and out of everybody’s door, and your neighbor was like your parents.”

In fact, Walter’s ties to his childhood home were so strong, he still got weekly haircuts at Marble Hill’s International Unisex Salon, at 151 W. 228th St. He even got them all from the same man, right from the very beginning.

The shop’s owner, Roosevelt Spivey, gave Walter his very first haircut — and virtually every one since. Spivey often joked how he found it ironic Walter loved getting his hair and beard trimmed, since he wasn’t always such a fan of the old “barber and a haircut” routine.

“Every time he’d come and get a haircut, as soon as you got him to the threshold of the door, he’d cry,” Spivey said, chuckling. “He feels shame about it now because he’s a grown man. But that’s the truth.”

When Spivey himself faced the loss of his 58-year-old barber shop because his rent was doubling, Walter was there standing beside the man affectionately known as Rosey.

“Unbelievable,” he told The Riverdale Press at the time. “The man is a fixture in the community. What are they going to replace us with? Another doughnut shop or whatever? This place is a fixture to all the kids who’ve grown up here.”

After high school, Walter joined the Navy, where — among other stations — he served on the nuclear submarine USS Shark out of Groton, Connecticut. He spent a good part of the 1980s there, according to his sisters, becoming a licensed electrician.

After leaving the armed forces, Walter spent a decade with the U.S. Postal Service, before finally landing at the MTA in 2000 as a bus operator. Working with the transit agency was a family affair in the Watson household — Walter’s wife Tiffany is a general superintendent for the MTA, overseeing more than 600 employees.

The coronavirus has not been kind to the MTA. Walter Watson is one of 123 workers who have died since the start of the pandemic in March, according to James Gannon of Transit Workers Union Local 100. And the last time Gannon checked, more than 2,000 transit workers had tested positive for SARS-CoV-2.

Walter was just five years away from earning his full pension from the MTA.

In addition to his sisters and Tiffany, Walter left behind two daughters, 20 and 24, as well as a 2-year-old son. But he also leaves behind a legacy of someone much loved in his community.

“I can’t think to any mean thing to say,” Melissa said, “because, well, he wasn’t mean.”